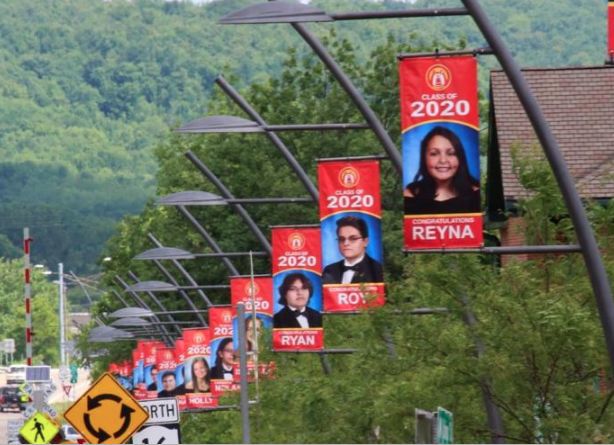 The banners of seniors with Olean High School’s class of 2020 are a colorful, beautiful addition to North Union Street.

This is an example of one of the banners that are hanging on North Union Street in honor of the class of 2020 at Olean High School.

The banners of seniors with Olean High School’s class of 2020 are a colorful, beautiful addition to North Union Street.

This is an example of one of the banners that are hanging on North Union Street in honor of the class of 2020 at Olean High School.

OLEAN — Graduates of the class of 2020 at Olean High School are not only being honored with banners on North Union Street, but also will stand near their individual banner at 7:30 p.m. Friday for passers-by to congratulate them.

Olean City School District Superintendent Rick Moore said approximately 115 banners of the seniors were recently placed on the poles with the help of the city of Olean.

“The banners are up and the mayor did a great job,” Moore said of Mayor Bill Aiello.

He said the seniors will be asked to stand near their banners, weather permitting, at the previously mentioned time on Friday.

“We’re going to have the kids stand by their banners, with social distancing, and people can drive by them on North Union Street to say goodbye or hello to them from their cars,” Moore explained.

Aiello also commented on the banners and how their placement was a cooperative effort between the city, school district and an organization. The mayor said he had been contacted by Moore several weeks ago with a proposal to display the banners in honor of the class of 2020.

“I told Mr. Moore that this was a fantastic idea, but that we would have to work with the Exchange Club, as that organization sponsors the Hometown Hero banners which are usually displayed for Memorial Day,” Aiello recalled. “The Exchange Club agreed with our proposal and we will install the Hometown Hero banners after graduation, in time for the Fourth of July holiday.

“As mayor, I am very happy that we were able to honor our seniors in this special way,” Aiello continued. “They have missed out on many of the traditions that occur in the spring of their senior year and I am glad the city could provide them with this recognition. I would like to thank all who have worked to make this possible; in addition the banners help to make North Union Street very festive and cheerful, especially as we enter Phase 3 of our reopening.”

Moore provided an update regarding outdoor graduation plans for the seniors.

“Graduation is at 10 a.m. (June 27) in the Olean Intermediate Middle School parking lot” on Wayne Street, he said, noting the original plan had been for an hour later on the same date. “It’s limited to the parents of the graduates.”

District administrators had previously stated that they plan to set up a stage in the school parking lot and designate parking spaces for the vehicles of each of the 115 graduates and his or her family.

Principal Jeff Andreano had reported the stage will provide an opportunity for each student to come up and receive a diploma and have a photo taken.

“Everybody will be able to watch because they’ll be in their cars … that’s our plan right now and it’s pretty solid,” Andreano said. In addition, the audio portion of the ceremony will be broadcast on the car radios through technology provided by the district.

On a related topic, Moore said distance learning classes for the school year in the district ends this week, and lunches for students provided at drop-off sites in the community will end after today.