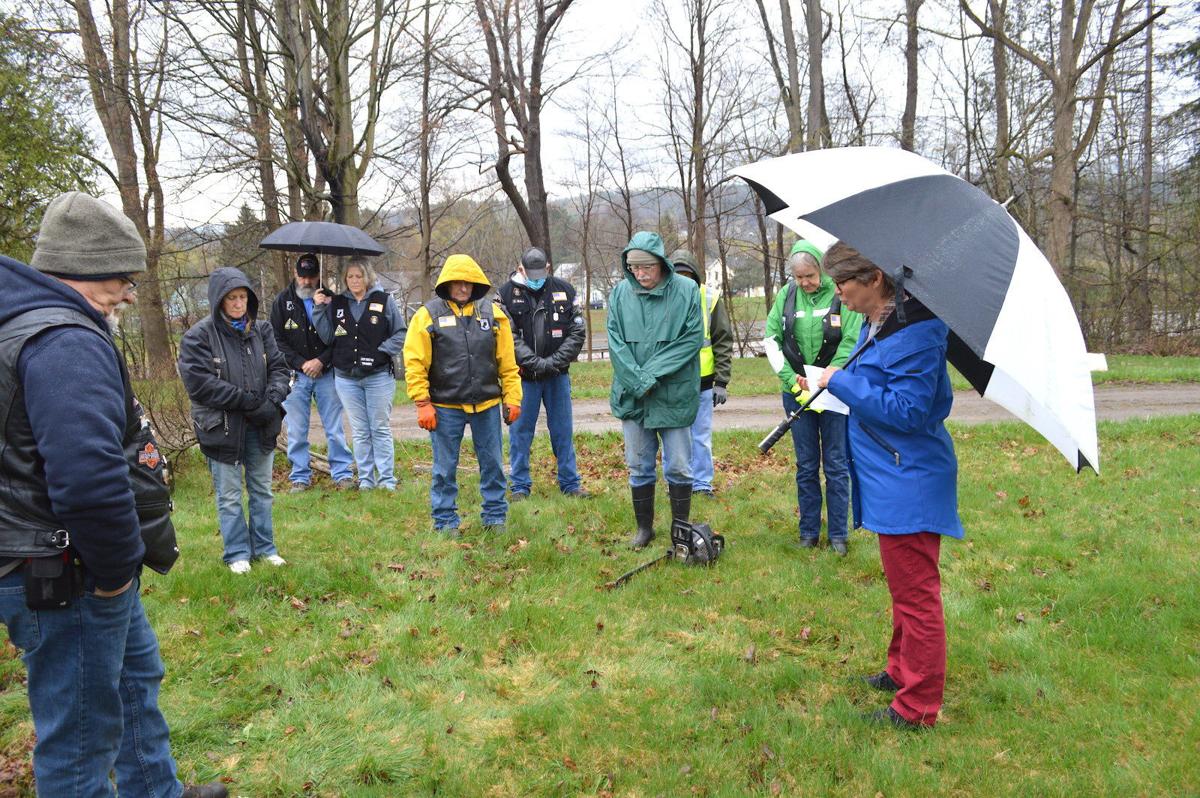 Volunteers and members of the American Legion Riders listen to the Rev. Karen Borchert bless the work at the Johnson Cemetery in Wellsville. 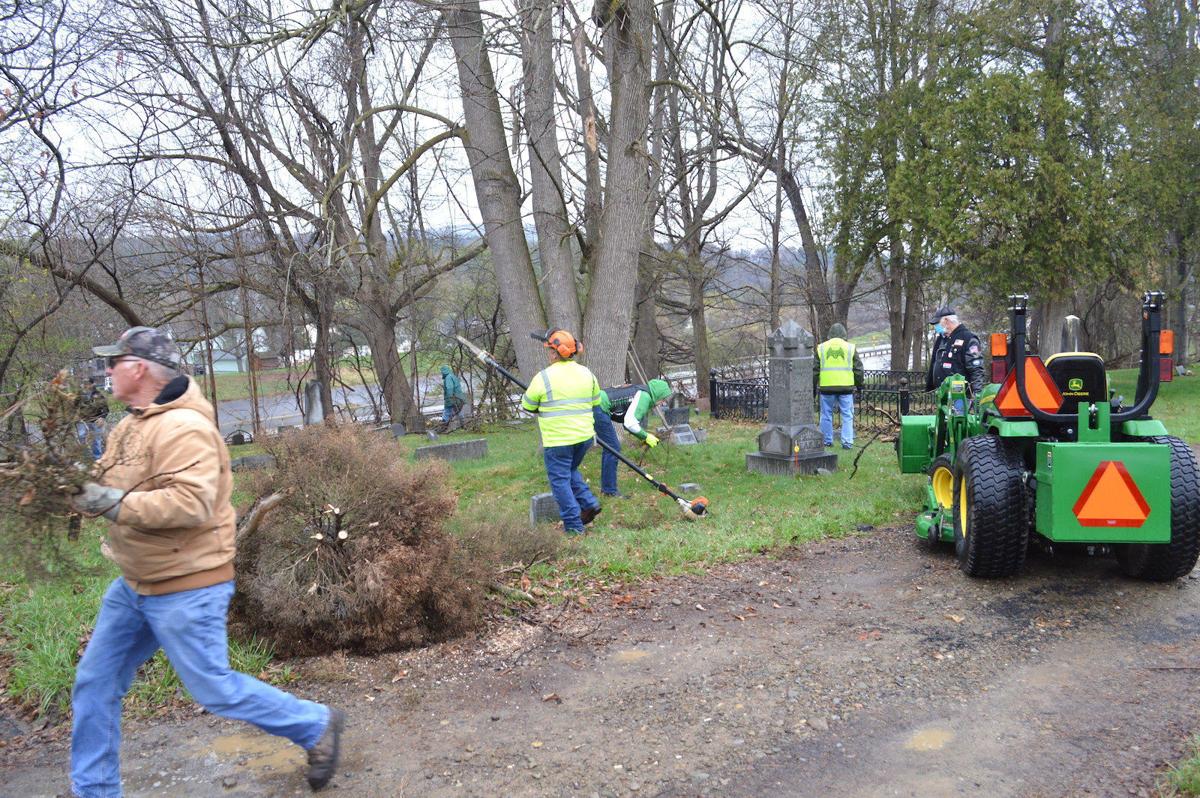 Work to clean up the Johnson Cemetery started Thursday in a drizzling rain.

Volunteers and members of the American Legion Riders listen to the Rev. Karen Borchert bless the work at the Johnson Cemetery in Wellsville.

Work to clean up the Johnson Cemetery started Thursday in a drizzling rain.

WELLSVILLE — Amid the gray, wet, ancient headstones, members of the American Legion Riders, friends and volunteers started to clean up Johnson Cemetery in a drizzling rain Thursday.

Dennis White, who is spearheading the move against the brambles, fallen limbs and broken headstones, said the plan is to have much of the cemetery cleaned up and presentable by Memorial Day.

But the work on fixing headstones and honoring the fallen and deceased veterans of the War of 1812, the Civil War and World Wars I and II buried there will last a couple of years, White said.

The work will go on each Thursday, Friday and Saturday from 10 a.m. to 2 p.m. until Memorial Day. White said additional volunteers are welcome and need only show up.

The town highway department is providing the heavy equipment and two operators to help out. The upkeep of the Johnson Cemetery became the responsibility of the town of Wellsville in the 1980s. Little other than mowing has been done.

Two weeks ago, the Rev. Karen Borchert arrived in Wellsville and became the pastor of Grace United Church. She was put to work to give the “blessing” on the work taking place in the cemetery.

Under umbrellas the members of the work crew listened to Borchert’s message and the Bible verse she read.

For White and others, Borchert’s blessing meant that the life of the cemetery has come full circle.

He explained that Grace United Church is the result of the old Congregational church family merging with the Christian Temple Church family a few years ago. An older Congregational Church stood on the street that once led to the Johnson Cemetery before time, flood and the nearby hospital expansion eliminated the street leading to the cemetery entrance.

Nathanial Johnson, who created the Johnson Cemetery in the 1840s, was a member of the Congregational Church.

“I think it’s great that 180 years later that this cemetery has come full circle,” White said.

He noted that extra help and knowledge is needed to repair the toppled and broken headstones on the cemetery grounds. Recalling an anecdote, he pointed to a headstone in which there was an open circle.

“A bell used to hang there, and it had a little rope that went underground and into a casket where it was wrapped around the hand of the corpse to be rung in case the deceased suddenly woke up after being buried,” he said. “That’s why we have the word graveyard shift, because someone watched over the cemetery during the night in case the bell rang.”

White said he didn’t know if they would replace the bell.

Aside from the historical relevance with some of the village’s first and prominent residents interred there, Johnson Cemetery is the resting place of many veterans. The veterans’ graves are what concerns White the most.

“We owe it to them to honor their graves for the sacrifices they made,” White said. “Wellsville’s heritage is resting here, and we need to honor that and the veterans who are buried here.”

The graves of veterans have already been marked with small medallions, which will hold American flags for Memorial Day.

The concern for Johnson Cemetery rose when representatives from Jones Memorial Hospital approached the town for a right of way from its new parking lot being constructed on the north side of the cemetery. The overall condition of the cemetery was noted by the American Legion and the Legion Riders. They decided to undertake the repair and clean up of the cemetery and an old cemetery on Bellamy Road, for which they just received permission to clean up.

The efforts will run simultaneously.

But both projects also require funding. White said that while they plan to hold fundraisers for the cost, they are also accepting donations.

Donations may be made at the Legion or by sending a check addressed to the Legion and mailed to The American Legion at 113 Jefferson St., Wellsville, N.Y., 14895. It should be noted that the donation is for the Cemetery Fund.