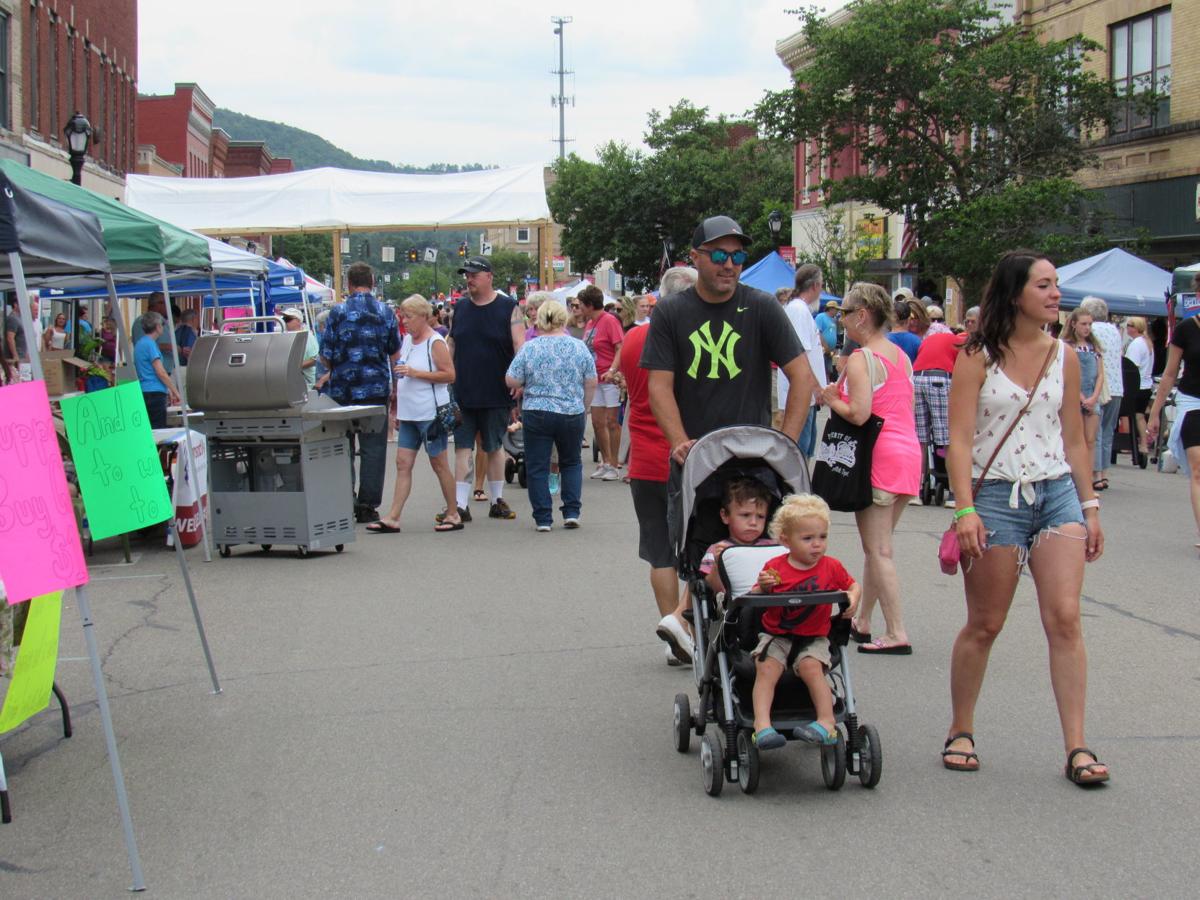 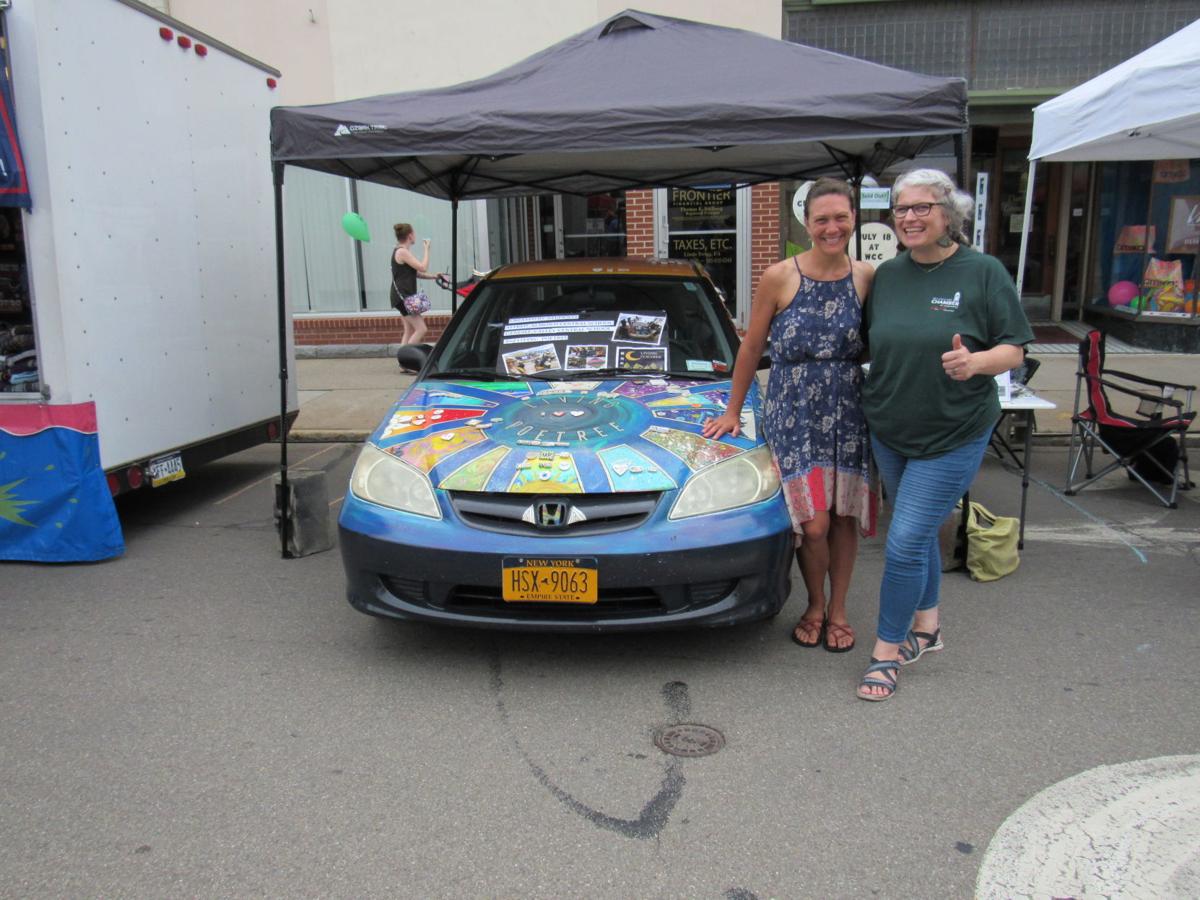 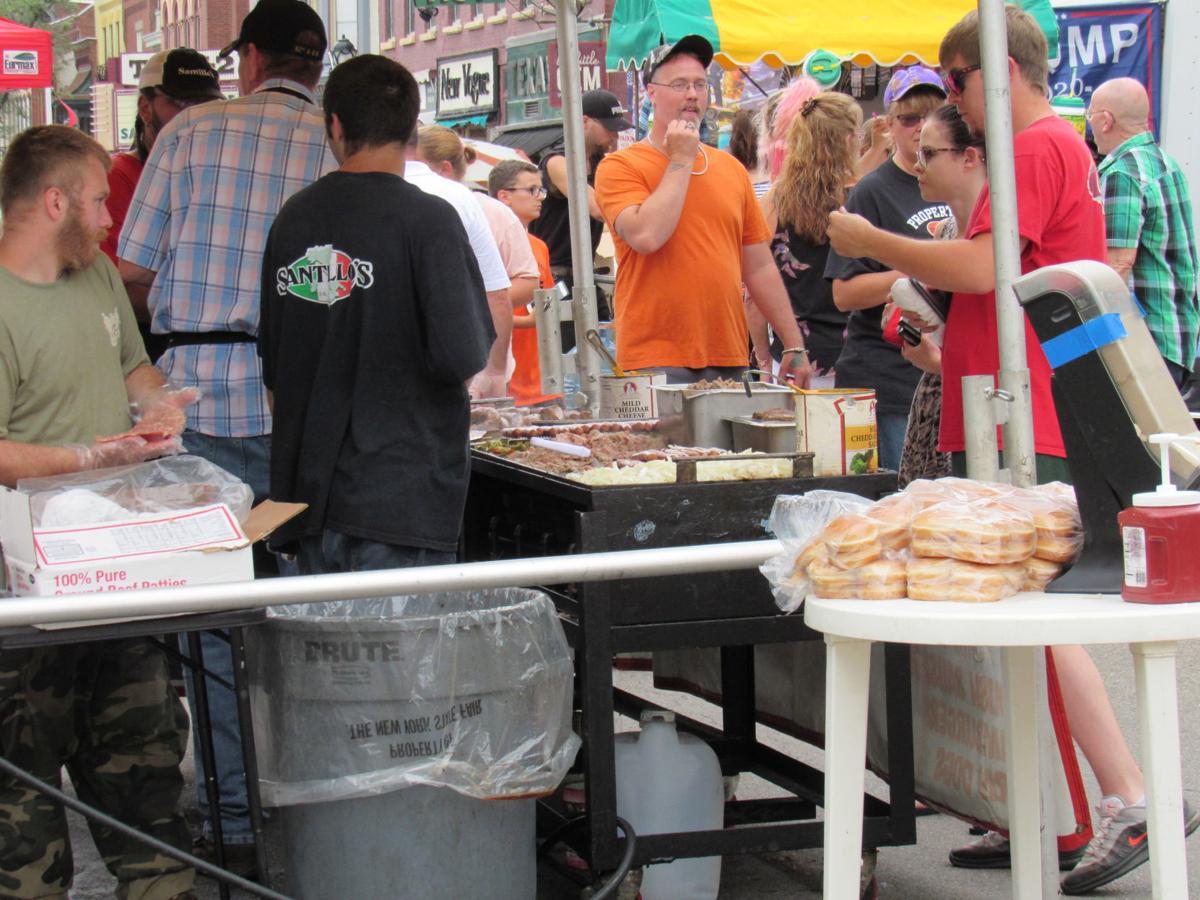 Visitors at the Wellsville Main Street Festival Saturday enjoy concessions among the roughly 100 vendors open throughout the day.

Visitors at the Wellsville Main Street Festival Saturday enjoy concessions among the roughly 100 vendors open throughout the day.

Scheduled to begin at 9 a.m., many of the vendors had only just begun to set up shop when a crowd arrived from Island Park after the 6 a.m. Balloon Rally launch had been cancelled due to possible storms rolling in.

Although the dark clouds and wind proved unsafe for launches, the weather did not impede many participants from sidling downtown to partake in the offerings of roughly 100 vendors and other stations set up on Main Street.

“We’ve got quite a crowd this year, and we have about 95% of the venders here today, even though some of them were nervous about the weather,” said Wellsville Area Chamber of Commerce executive director Al Mosher.

As people arrived from Island Park, volunteers assembled a wooden sound stage for live music by 23 Skidoo, and Chamber members directed visitors toward vendors who were ready for business. Closed off to vehicular traffic by the village, Main Street was open for exploration.

Dozens, then hundreds vitalized the festival and impressed the Wellsville Area Chamber of Commerce, which put its new motto — New Era. New Chamber — to the test.

“We’re working really hard and using whatever means we can to boost everything,” said chamber member Karen Kania, who assisted in setup and has learned a lot since she became member services coordinator just last week.

“We started here at 5 o’clock this morning,” added Mosher. “A lot of our volunteers were here early setting up booths, putting cement blocks down and trying to get things organized.”

Mosher attributed the success of the festival to the sponsors and volunteers who made it all possible, as well as the many pilots who travel from all around the country to fly their balloons and bring in the community.

Nirvana Reimagined As House And Techno Is Upon Us

“The balloonists enjoy this one because we do a few little extra things for them,” he said. “We provide breakfast, give them goodie bags and make them welcome. They have a big investment in their balloons and we appreciate them supporting the Balloon Rally because in return it helps the Chamber of Commerce and everybody else, including the community and businesses.”

Although the Friday evening and Saturday morning launches were cancelled, evening balloons were finally in the air Saturday evening.

In the meantime, people did things such as visit the Northern Lights candle sale, purchase books at the annual used book sale at the David A. Howe Library and attend a fashion show at Trend Addictions. The Wellsville Fire Department sold chicken barbecues and provided tours of their engines to kids.

A debut attraction at this year’s festival was chamber marketing intern Sand Robbers’s community poetry project called Civic Engagement. In preparation for this year’s festival, Mosher asked chamber members for ideas to add something new to their Main Street station. Taking up the challenge, Robbers, who runs a conceptual art business called Living Poetree in Alfred, volunteered to bring her used Honda Civic, which has been transformed into a mobile canvas for magnetic poetry with the help of students from two Allegany County schools.

“Basically it’s a community art project that’s a collaboration between Genesee Valley Central School, myself, Living Poetree and Alfred-Almond Central School,” said Robbers. “Genesee Valley students helped paint the car and Alfred-Almond created some ceramic magnets that serve as magnetic poetry so at events like this people can come and put words together to write their own poetry. There are also blank wooden magnets so people can write additional words themselves and customize the lines.”

“When they painted this, our bus garage was nice enough to make a space for us, so they got to be in a part of the school they had never experienced,” said Buchholz. “And painting something that is going to be so open to the public changes kids’ way of thinking. How are you going to paint this? What are you going to do? There was not only a lot of collaboration, but a lot of trust.”

Kids and adults arranged the 400-plus magnetic words crafted by Alfred-Almond students into lines of poetry outside the chamber throughout the day, making Civic Engagement a popular new attraction. More information about Civic Engagement can be found on the Living Poetree website at https://www.livingpoetree.com/what-is-living-poetree.