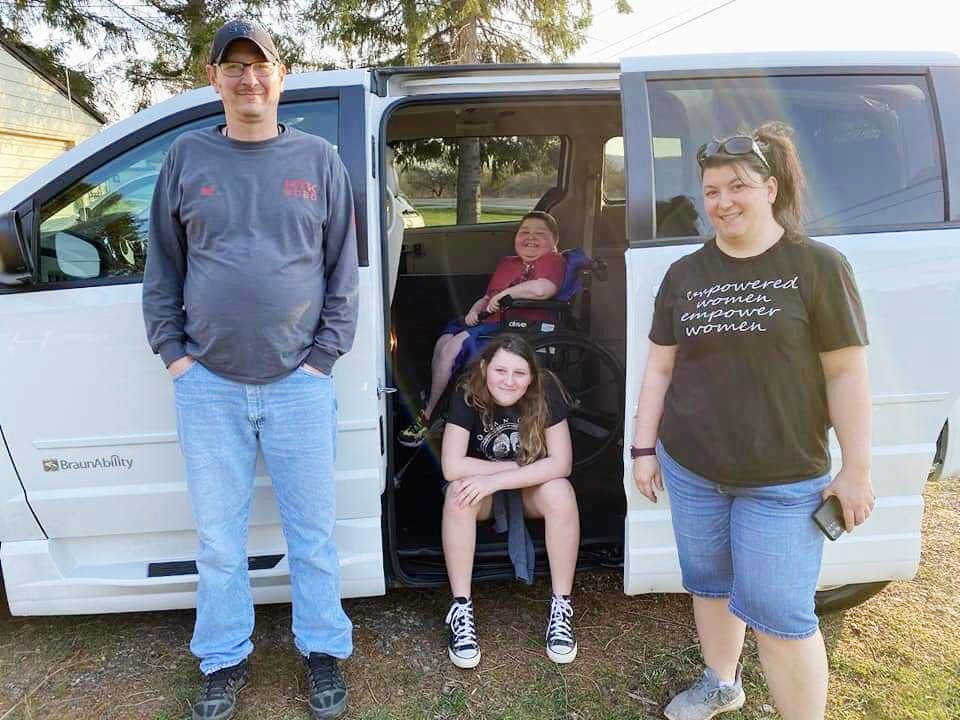 The Pierce family was given a wheelchair accessible van by West Herr Automotive Group for son Trenton Pierce, who has Duchenne Muscular Dystrophy (DMD), to safely travel for his medical needs. From left are Trenton’s father, Anthony; his sister, Peyton; Trenton, inside the van; and mother, Jordan. 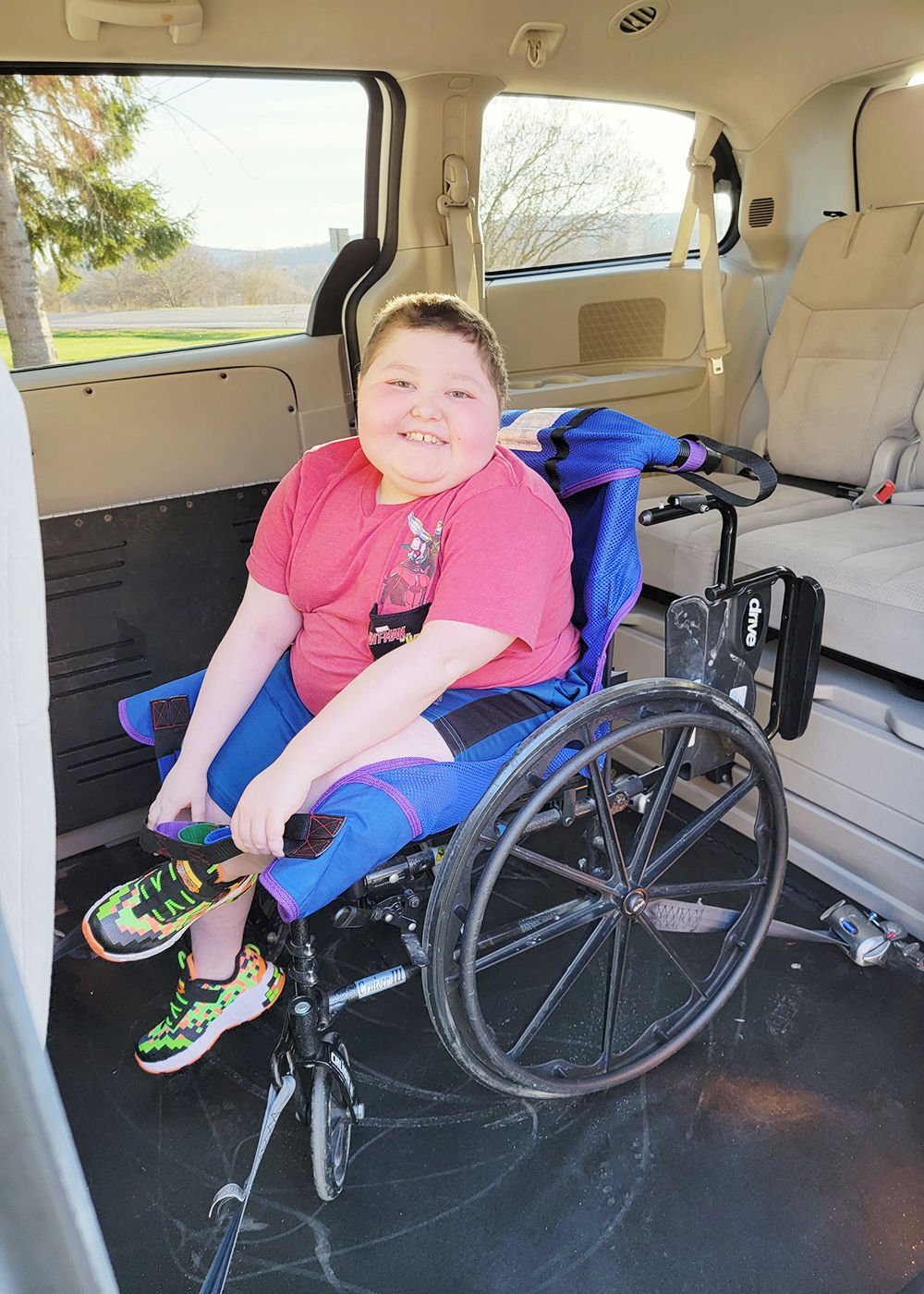 Trenton Pierce cannot stop smiling every time he goes for a ride in the van equipped with accommodations made for his wheelchair.

The Pierce family was given a wheelchair accessible van by West Herr Automotive Group for son Trenton Pierce, who has Duchenne Muscular Dystrophy (DMD), to safely travel for his medical needs. From left are Trenton’s father, Anthony; his sister, Peyton; Trenton, inside the van; and mother, Jordan.

Trenton Pierce cannot stop smiling every time he goes for a ride in the van equipped with accommodations made for his wheelchair.

GREAT VALLEY — Thanks to the generosity of the community and the West Herr Automotive Group, the Pierce family of Great Valley has a way to safely transport their 12-year-old son, Trenton, to his medical appointments.

Born with Duchenne Muscular Dystrophy (DMD), Trenton had to be helped inside his family’s car by his parents and a manual lifting-sling for a two-hour drive to Rochester. His parents, Anthony and Jordan Pierce, knew they needed a vehicle that could properly accommodate their son’s needs.

Jordan said DMD is genetic and eats away at muscles across the human body. However, they have no family history of this disease. She said Trenton wasn’t diagnosed until he was 6 years old.

“Duchenne is not a forgiving disease,” she said. “Even though DMD is always taking from him, he doesn’t let it affect him too much. He still has many friends and is always smiling and happy.”

According to Jordan, Trenton fell and fractured his left femur in 2019. Then, in October 2020, he fell and fractured his right femur, which drastically hindered his ability to maneuver his way around places. She said his continuous battle with DMD, coupled with his accident, required the use of a wheelchair.

“We were unprepared for him to not walk again,” she said. “He used a wheelchair before his accident, but only for distances such as around a grocery store or on a family walk. Even in school, the staff used it to get him around from class to class just to conserve his energy.”

Jordan said their family wasn’t prepared to purchase a wheelchair accessible vehicle at the time of Trenton’s accident. She said they still had other vehicle notes and were in the process of financing a new home to accommodate a wheelchair.

Looking for a way to make a wheelchair accessible van come true, the Pierces and family-friend Michelle Wasserman launched the “Give Trenton a Lift” fundraiser that successfully grew donations to a third of their $18,000 goal for the purchase of a transport van.

AS THE community continued to raise funds for a van to transport Trenton, an anonymous individual emailed the West Herr Automotive Group asking for help. Pierce said they have no idea who contacted West Herr on their behalf because no one has come forward, but they are very appreciative to them.

“After looking at the GoFundMe page and reading about Trenton’s situation, we reached out to Trenton’s mother, Jordan Pierce, and invited her to sit down and talk,” said Annette Smith, executive assistant to Scott Bieler, president and CEO of West Herr. “There is a spot on our website where people can send us messages; we read them everyday. We knew we wanted to help the Pierce family.”

SPCA in Cattaraugus County: Cats get a 'catio'

Pierce said West Herr contacted her family March 31 and, through part of the “West Herr Cares” initiative, Bieler and his team donated a 2016 Dodge Caravan to the Pierces April 9 that was equipped with accommodations made for Trenton’s wheelchair.

“After hearing Trenton’s story and getting to know the family, Scott Bieler, our president, was compelled to help,” explained Smith. “When we get presented with these unique opportunities to help someone, we’re going to do it. We want to make a difference.”

Trenton’s father works full-time as a painter for MicroTech Knives Inc., in Bradford, Pa. His mother previously worked for Pioneer Credit Recovery, but is now a stay-at-home mom because they couldn’t find adequate care for Trenton. He and his 10-year-old sister, Peyton, attend Ellicottville Central School.

The GoFundMe campaign has since ended and the Pierces have offered refunds to anyone that has donated to their cause. To keep their new vehicle maintained, they have used the funds raised from the campaign for a three-year warranty from West Herr.

Pierce said her family is thankful to the community and everyone involved for making the all-accessible van possible — especially West Herr.

“The van donation means so much to us. Having the ability to take Trenton out and do things now has been such a blessing,” she said. “This van has lifted so much stress off us, as well as lifted so much stress off of Trenton. He loves that we are able to just wheel him in and out of the van and not have to lift him one bit. He cannot stop smiling every time we get in the van; it brings us joy and relief.”

“For the first few days after we got the van, he was asking to go for rides to Buffalo. He had no idea what he wanted to do in Buffalo, but he wanted to go so bad,” Pierce continued. “We have since taken him shopping for clothes, grocery shopping, around town, to Allegany State Park, to school — everywhere — and he sure loves it.”

To keep people updated on Trenton’s battle with DMD, the Pierce family has created a Facebook page called “Trentons Journey with DMD.”