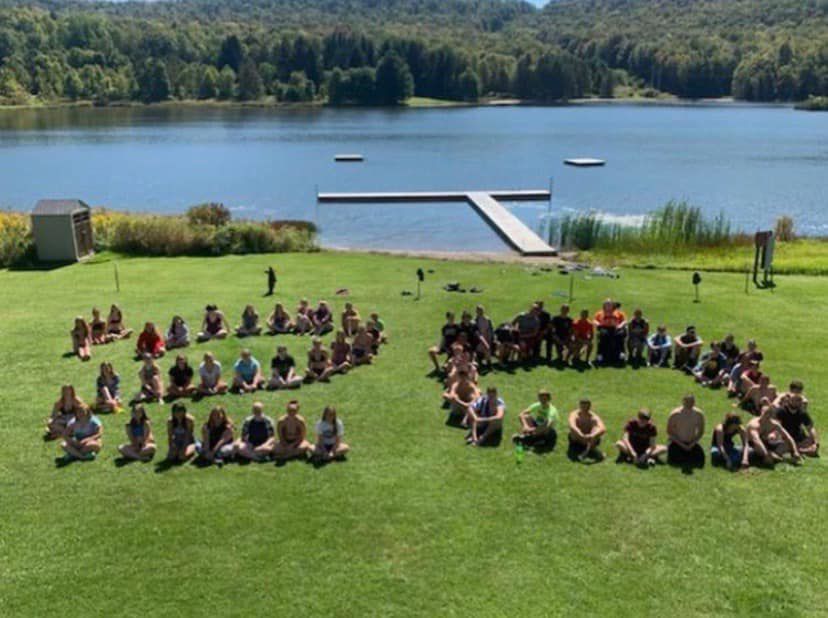 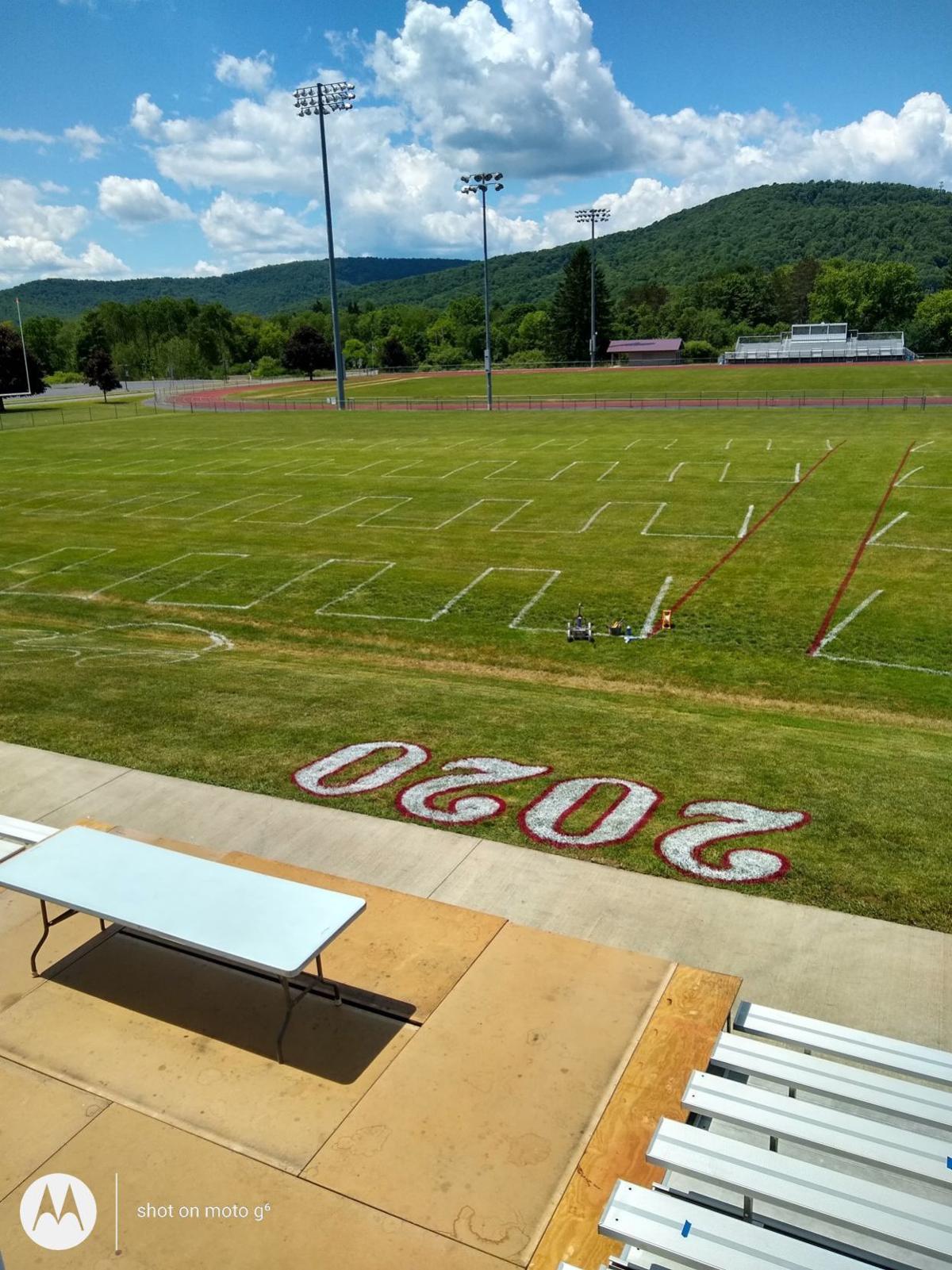 The stage is set and the football field marked for parking for Portville Central School’s Saturday evening graduation ceremony. 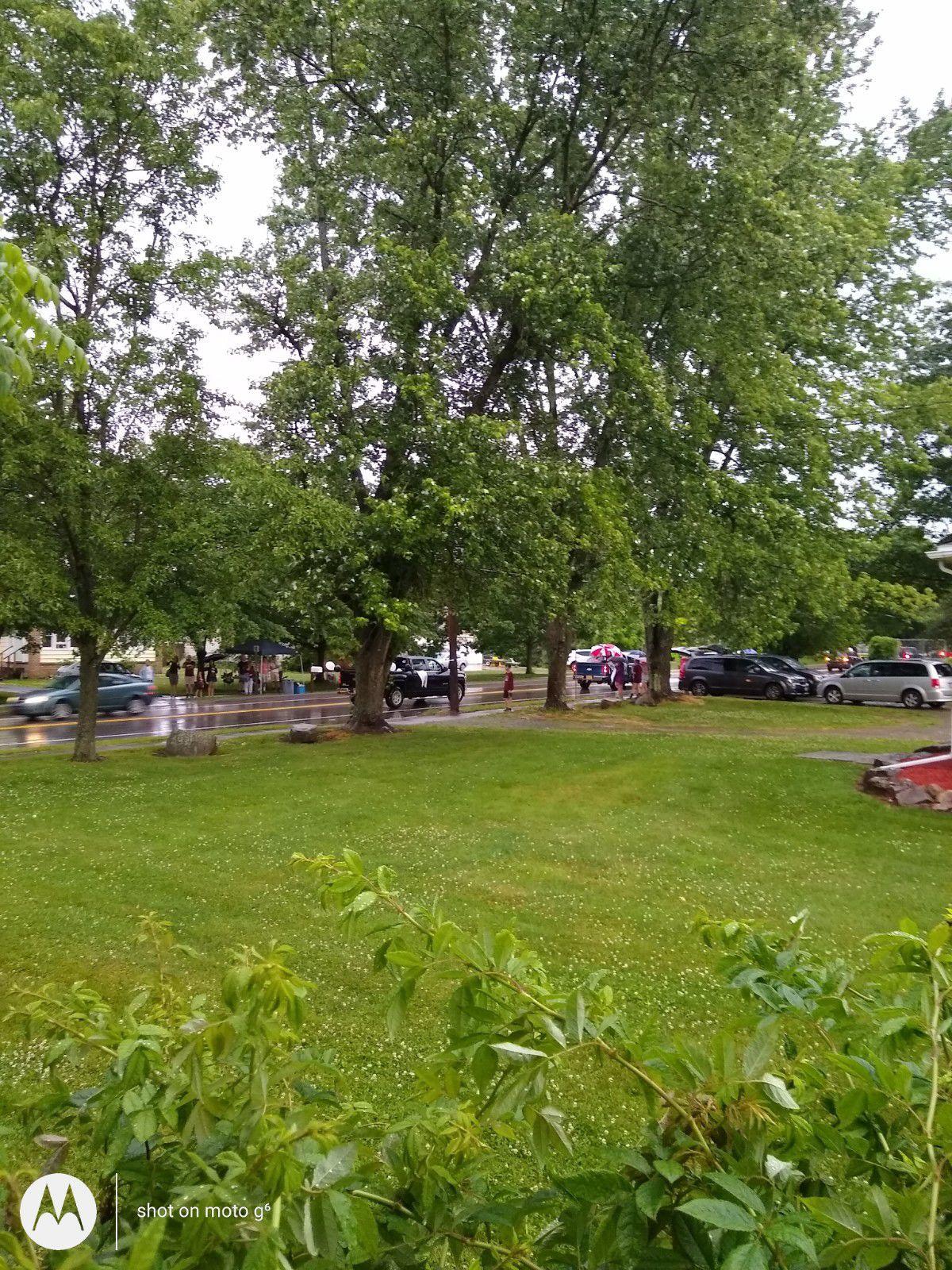 The village of Portville stood out in the rain Tuesday evening to cheer on the vehicles packed with Portville Central School Class of 2020 seniors. 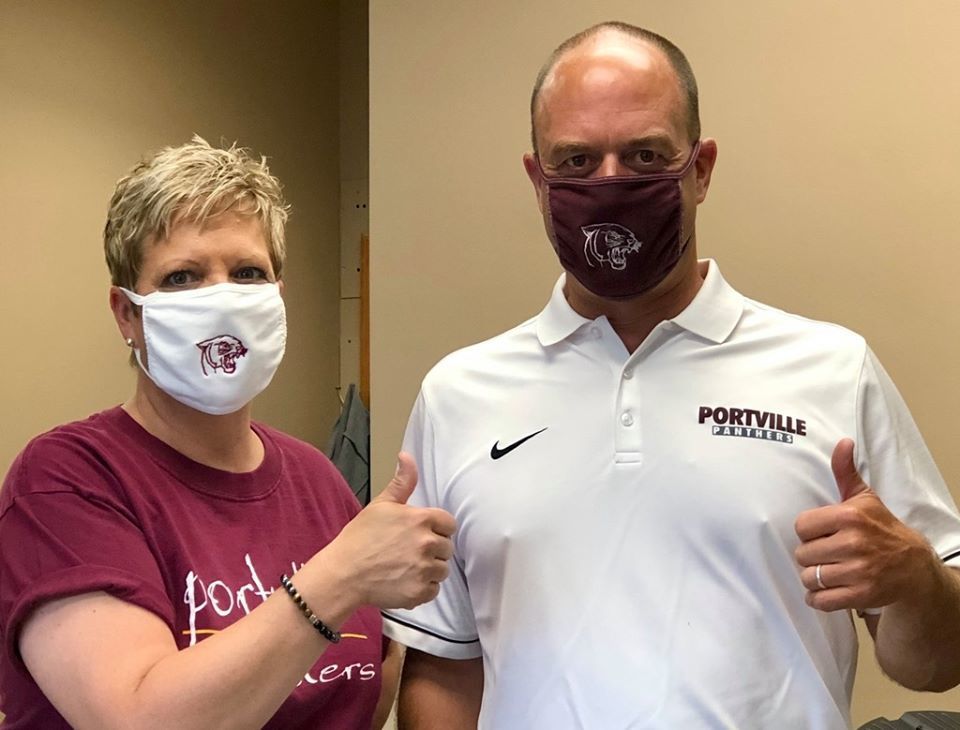 Larry Welty, high school principal and Tammy Baker, secretary, model the masks that will be worn by PCS graduates on Saturday night. Tom Simon, superintendent, spent days in the Envisioneering Center running each mask through the embroidery sewing machine to customize each mask with a Panther.

The stage is set and the football field marked for parking for Portville Central School’s Saturday evening graduation ceremony.

The village of Portville stood out in the rain Tuesday evening to cheer on the vehicles packed with Portville Central School Class of 2020 seniors.

Larry Welty, high school principal and Tammy Baker, secretary, model the masks that will be worn by PCS graduates on Saturday night. Tom Simon, superintendent, spent days in the Envisioneering Center running each mask through the embroidery sewing machine to customize each mask with a Panther.

PORTVILLE — While desks and chairs sat empty, schoolbooks were laid aside and silence hung in the hallways of Portville Central School, Principal Larry Welty was ensuring that the Class of 2020 would have a graduation to attend and remember.

In late April, Welty sent a letter to seniors and their parents attesting to his determination:

“As a proud school district, we understand that our seniors have given so much time and effort since their very first day of school at PCS. We will honor and celebrate the Class of 2020 with a graduation ceremony at Portville Central School.”

Plans were made, work began and, Saturday night at 8 p.m., it will all come to fruition on the football field.

“We have 73 students that will be receiving their diploma,” Welty said. “With all that our seniors have had to endure, we felt it was important to honor them with the best graduation ceremony that was possible.”

“We’re all really eager to see each other again,” said senior class President Autumn Gagliardo. “Throughout this whole time we’ve been texting” in a Snapchat group that the class set up to keep communicating every day.

The elevated graduation stage will be in the tunnel area of the football bleachers, so everyone parked on the football field will have a decent view of the ceremony. Seniors will be seated in the bleachers and spread out on both sides of the tunnel to adhere to social distancing guidelines.

Parking passes will allow for each family to enter the football field in their vehicle, where they will stay until it’s time for picture taking. While there can be any number of people in a vehicle, Welty asks that only one person be designated as a picture taker. That individual must be masked when leaving their vehicle, and they will walk to a predetermined spot from which to take a picture of their graduate.

Audio will be transmitted with an FM transmitter, the frequency of which will be provided upon entering the school grounds. Video will be projected on a large screen to ensure everyone can see the ceremony from their vehicles.

“We have people doing a ton of work ... just to get everything done that we’d normally do,” Welty said. “Of course, we have been in the planning stages for quite some time. As we have received guidance from the Catt. County Department of Health and NYS Education Department our graduation ceremony has evolved.”

“Mr. Welty, along with our maintenance crew have been working tirelessly to put together the best graduation experience possible given the circumstances,” said Tom Simon, superintendent. “While it may be different this year, I am quite sure that graduates and their families will find it to be a very special evening.”

One difference was evident Tuesday night with the kickoff of Portville’s 2020 graduation. A Portville Senior Parade started at the Portville town barn, and vehicles bedecked with signs and balloons, filled with happy, soon-to-be graduates who honked their horns to the dozens, if not hundreds, of people who lined the sidewalks in the pouring rain to cheer them on.

The parade, which went back and forth on Main Street, ended at Scoops, with Wilson’s Farm Market treating each senior to ice cream.

That sense of “Portville Pride” is stronger than ever between the school and the community.

“Our community has been wonderful,” Welty said. “The parents. They’ve been nothing but patient and forward thinking. What’s special is it’s not just one person, it takes everyone.”

That community gathered not just for June’s graduation time, but in late April. Over 500 people joined a Facebook group set up by Debbie Pinney called Adopt A Portville Senior (Class of 2020). Each of the 73 seniors was adopted and have received surprise gifts over the last several weeks.

Portville’s 2020 valedictorian is Shayla Wilhelm. The salutatorian is Emily Griffith. They, and class president Gagliardo, will all take part in the ceremonies Saturday night.