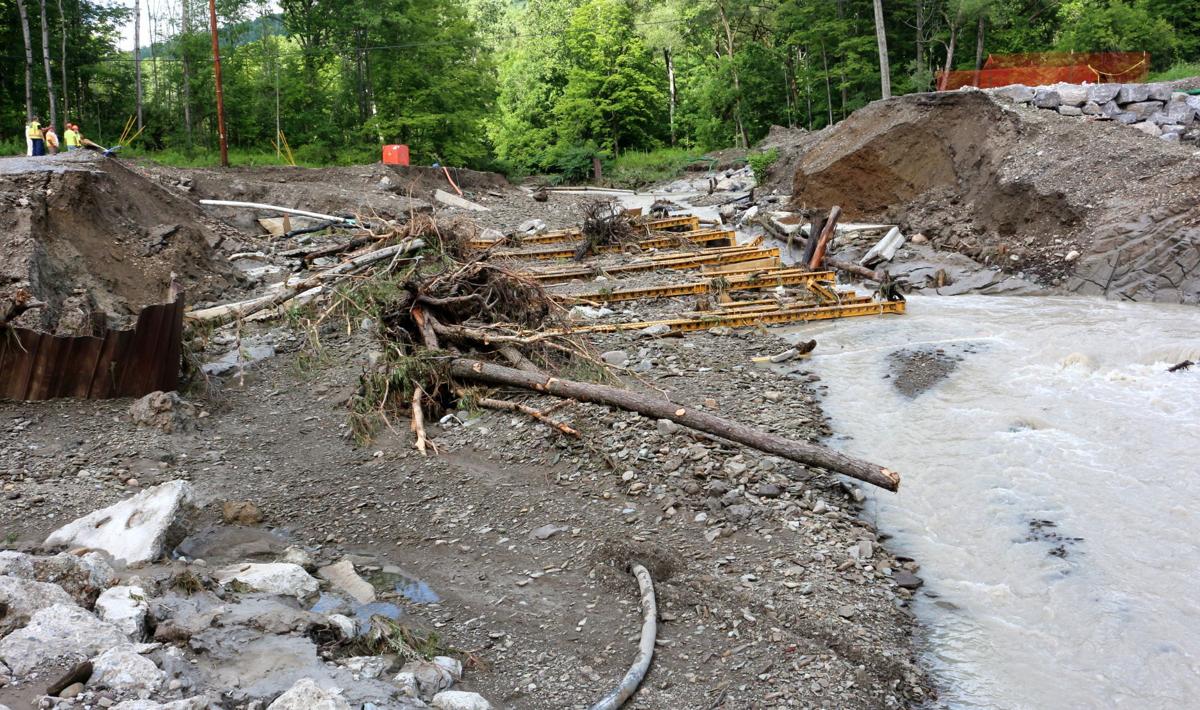 A construction crew stands at left, surveying the damage from floodwaters of the South Branch of Cattaraugus Creek that destroyed a bridge construction site on Tannery Street in Cattaraugus after heavy thunderstorms Thursday. No one was injured. 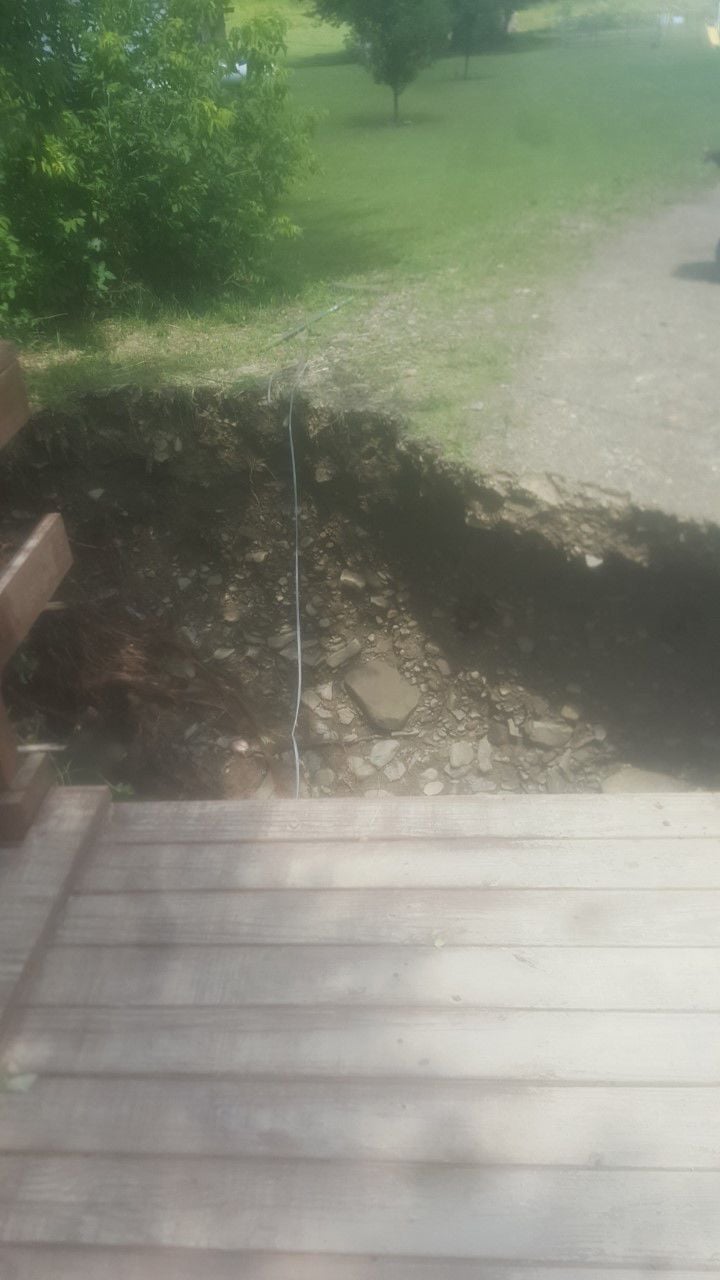 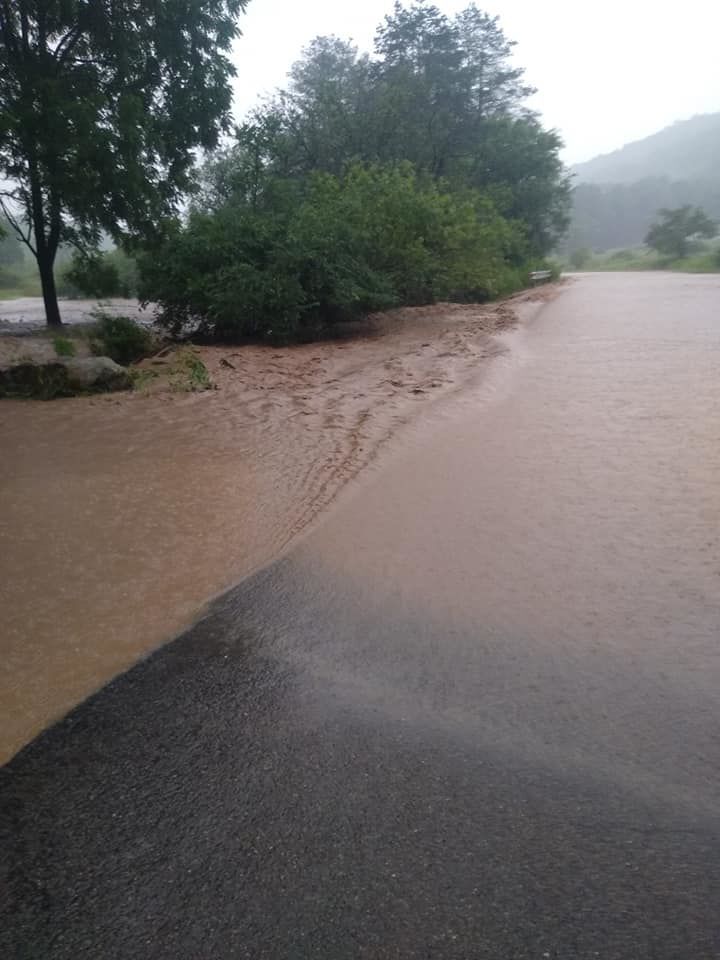 This photo by Kimberley Wier and posted on social media shows water flowing over 10 Mile Road in Allegany.

A construction crew stands at left, surveying the damage from floodwaters of the South Branch of Cattaraugus Creek that destroyed a bridge construction site on Tannery Street in Cattaraugus after heavy thunderstorms Thursday. No one was injured.

This photo by Kimberley Wier and posted on social media shows water flowing over 10 Mile Road in Allegany.

Battered by fast-moving floodwater filled with debris, including trees and large stones, the forms were heavily damaged and filled with rocks and mud, said Sal Collana, the project manager for Edbauer Construction Co. of West Seneca.

“It cut back into the old channel then hit the forms,” said Mark Burr, Public Works director of engineering. “They are going to have to dig out the forms and rocks below and start over.”

Collana said the diversion methods were designed for up to a two-year storm. “It way exceeded that,” he added.

“We moved equipment out of the way including the crane,” he said. “We lost a 500-gallon fuel tank. That’s somewhere downstream.” The crane was moved to higher ground before the creek started cutting into the bank it was setting on.

Burr said the heavy thunderstorms were concentrated in a small area surrounding the village of Cattaraugus.

“There was little storm damage in New Albion and some in Otto,” he said, but most damage was right around Cattaraugus.

County Public Works crews responded to clear some culverts that backed water onto county roads 12 and 5.

The old Tannery Street bridge was demolished as part of the replacement project. It consisted of three 10-foot corrugated steel culverts beneath the bridge deck.

The new structure will include concrete culverts that will sit on a new concrete foundation.

Also, a nearby concrete structure will be built so the bottom of the stream can go down slowly instead of at a steep pitch. A similar “step-down” structure at the original bridge site was deteriorating.

“They were ready to pour the foundation next week,” Burr said. “They are going to have to remove all the debris and the forms and start over.”

The creek also “wiped out a lot of fill — a huge amount,” Burr added.

'On the Trail' shows the fine art of finessing

Covid-19 antibody treatment may be a test run for vaccine

Some kayakers spotted the fuel tank Friday afternoon on Cattaraugus Creek, many miles from the bridge construction site. A diesel smell was noted and the state Department of Environmental Conservation was contacted.

The tank contained as much as 250 gallons before it was swallowed up by floodwaters.

The construction company’s insurance carrier has been notified and will visit the site soon, Burr said.

“Thank goodness they got the crane moved before it could be damaged,” Burr said. The crane was used to set the steel frame for the foundation.

“There’s still enough time in the construction season to finish the project after they get it cleaned up,” Burr said. “I haven’t talked to them about it yet, but I’m hoping we can finish it this season.”

MEANWHILE, on Union Valley Road in the Town of Olean, Jared Carter said the bridge to his property over the Centerline stream was damaged by floodwaters.

Carter said the bridge has been rebuilt three times in the past 10 years because of flood damage — a problem he says has persisted because of more development and multiple sluice pipes into the stream and the build-up of debris along the stream.

“That in turn is causing more and more water back-up,” Carter said. “Two years ago this happened and our neighbors had to be rescued by boat. We are looking for answers from the town but nobody will take responsibility.”

The heavy rains and wind reached Cattaraugus County shortly before 6 p.m. Thursday. At about 7 p.m., a tornado warning was issued over emergency circuits, but there were no confirmed reports of funnel clouds.

In the city of Olean, a tree was downed at Homer and Johnson streets.

Five trees blocked the roadway on Route 242 alone, with several others reported elsewhere. Some trees had landed on wires, causing fires. Route 242 was closed between Kyler Hill and Dutch Hill roads due to flooding.

West Bucktooth Run Road in Little Valley was reported washed out and impassable, as well as wires down across the Hardscrabble Road in Napoli. One emergency radio report indicated that Manley Hill Road had 40 to 50 yards of trees down on wires.

In Salamanca, Crawford Street was reported as flooding and a tree blocked Jimerson Road. National Grid was requested to respond to a flooded house on South Main Street, as water in the basement was over the electrical panel and a strong smell of natural gas was described.

There was also flooding at a residence on Ten Mile Road in Allegany that washed away several items, causing water to enter the home. Trees were also reported floating down Mosher Hill Road.