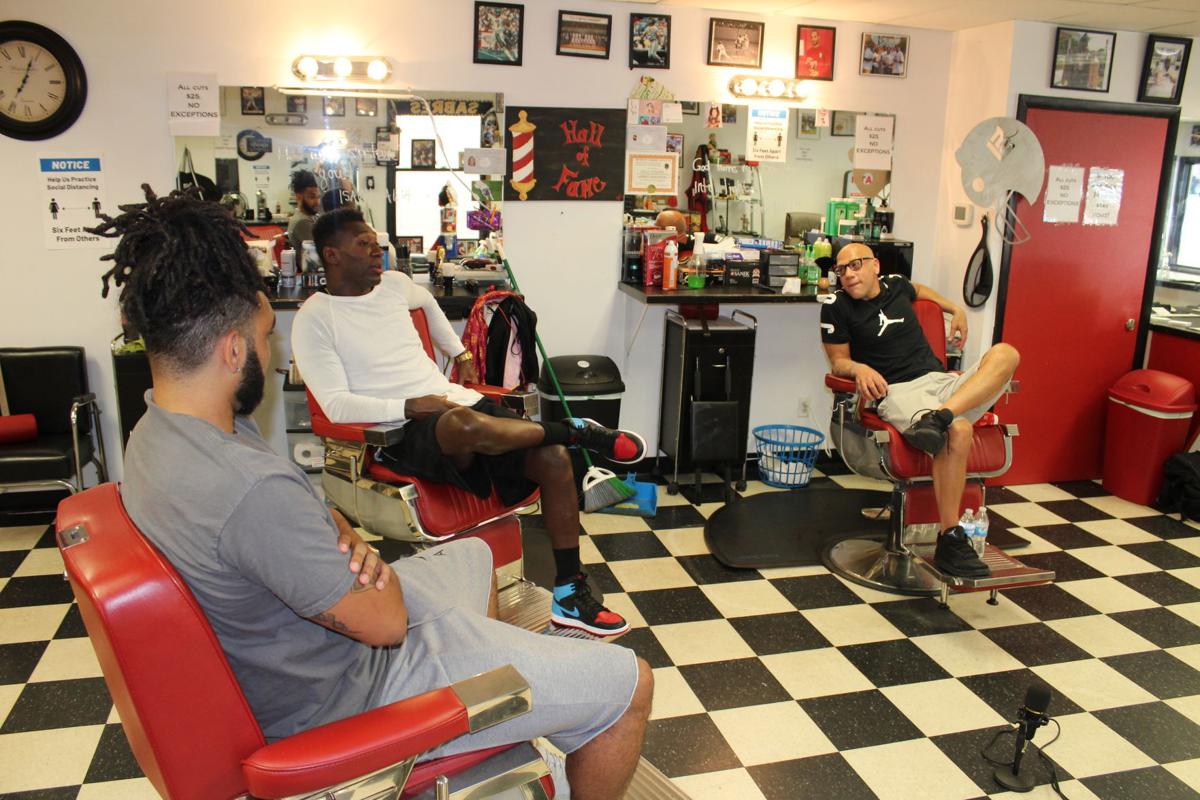 Olean’s Ryan Carney (left), Jesse Turner (center) and Daniel Gayton discuss their views on race — both at home and in America — in Hall of Fame Barbershop. 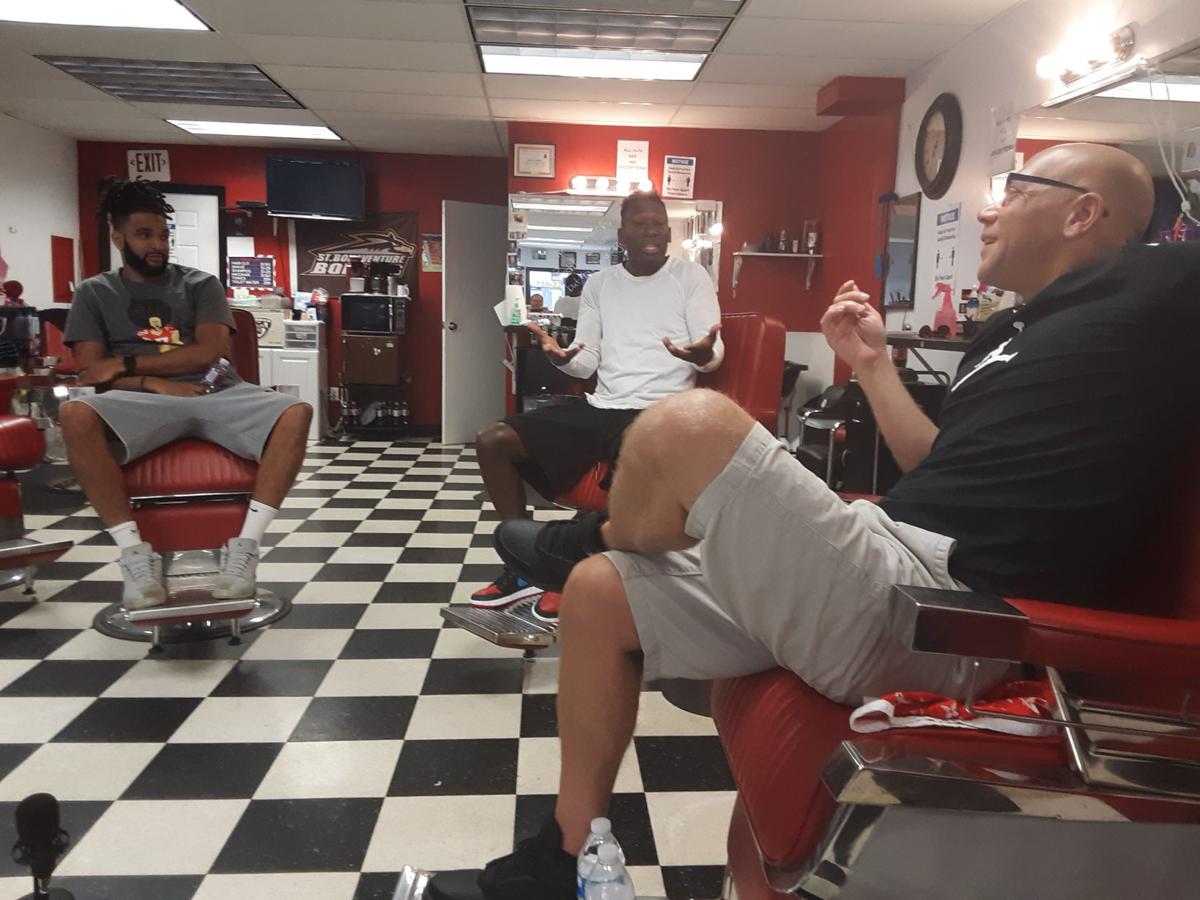 Olean’s Ryan Carney (left), Jesse Turner (center) and Daniel Gayton discuss their views on race — both at home and in America — in Hall of Fame Barbershop.

OLEAN — There’s a long way left to go toward racial equality, but “baby steps” are being taken nationally and locally.

In barber chairs at Hall of Fame Barbershop on West State Street — “You get no better conversations than you do in a barbershop,” said organizer Daniel Gayton — three of the city’s black residents spoke with the Times Herald for an hour about their feelings on the protests, the movements made in the past few weeks politically, and what still needs to be done to help promote equality.

Joining Gayton, a human services worker, were Jesse Turner, also 42, a parcel delivery driver and personal trainer, and Ryan Carney, 28, a real estate and mortgage loan writer who returned to his hometown of Olean during the COVID-19 pandemic. The talk was the second in a series coordinated by Gayton called “Conversations,” the first of which was hosted a week earlier at Franchot Park.

The dialogue is in the aftermath of the murder of George Floyd in Minneapolis last month — a tragedy that has resulted in sustained protests across the country and around the globe.

The full video of the talk is available on the Olean Racial Justice Coalition’s Facebook page.

CARNEY SAID THAT protesting is good, but it cannot stop with a few signs in Lincoln Park.

“I think where we’re at is a very interesting time,” he said. “I think the conversation is great, but now it comes to action … Only time is going to tell.

“It’s a start, but we’ve had lots of starts,” he added. “This is not an overnight process — it’s a 20-year process and it starts in the schools.”

He noted that black history in textbooks seems to account for “what, a chapter?” when it should be laced throughout the nation’s history.

Carney said he appreciates the support from local protesters, but action is vital to actually solving the problems of race in society.

“Ninety percent of the people were white, it felt almost like an Instagram dance party,” Carney said. “The protests are great, but what’s next month? Talk to me in a year.”

Gayton said the protests show that there is support for making change, and the ballot box is vital to the future.

“I think they’re ready for change around here,” he said. “Ninety percent of them are voting — that’s where your change comes from.”

Gayton also said there has been much focus on Floyd’s past — a criminal record and qualities as a father, specifically — by those looking to discredit the movement and it is a distraction from the uncomfortable topic of racial injustice.

“How many times have you heard that? It’s every day,” he said, adding that while Floyd had a rap sheet and may have resisted arrest, those do not deserved an extrajudicial death penalty.

Gayton and Turner said they have experienced racial profiling and selective enforcement in Olean because of the color of their skin.

Gayton noted that, as a youth, he was once arrested for burglary and held before a two-day trial ended in acquittal.

“I lost my whole football season because they profiled me,” he said, adding he fought off several offers for plea deals for the crime — which occurred while he was asleep at home.

Turner said that in high school, he was arrested after his homecoming game by a Cattaraugus County sheriff’s deputy who didn’t know him.

“You’re either superhuman or subhuman,” he said, referencing how black athletes are revered for what they do on the court or the field but discounted if they can’t jump high or run fast.

He added that while the city police knew him as someone who today still holds nine school football records as a responsible youth, the deputy saw him as just a black youth and a potential threat.

“You’re wearing body armor — and you’re scared of me?” he said. “I became subhuman the moment somebody didn’t recognize me.”

He said he is worried for his young son.

“Olean isn’t a golden city where bigotry and racism doesn’t happen,” Gayton said, adding he has been passed over for positions on boards in the area because “you don’t look like who we have on the board.”

“Olean is a much less severe level of racism than Buffalo or New York or Los Angeles or wherever,” said Carney, adding that growing up in the 2000s, “by the time I was older, racism was better disguised.”

WHEN ASKED IF there is a need for local police agencies to reform, all three were in agreement.

Referring to the war on drugs as “the new racism” — not only does the United States lead the world in prisoners per capita, but more than 37% of prisoners in the U.S. are black men despite making up 13% of the population — Gayton said there has been a change in local policing since his youth.

The militarization of police in reaction to the drug war, Turner said, has been the major catalyst.

“You give them a gun, a baton and a Taser — what do you expect them to use?” Turner said, adding that other tools must be made readily available in order to provide aid to those in trouble, not to punish them.

“You need to change the soul and the heart of it,” he said, adding that the culture glorifying the military has also played a role. “Americans have been bred to value military might.”

Gayton said reading the police blotter he often sees names of individuals he knows — of various races — who are mentally ill and in need of support.

“I say, ‘You’re arresting that guy? Why aren’t you getting that guy help?,’” he said. “There’s no compassion anymore, there’s no caring.”

They agreed that while some of the reforms already passed can have a positive effect, such as the repeal of 50-a, which opens police misconduct records to the public and could keep fired officers from seeking employment elsewhere in law enforcement, others need to be kept under careful watch.

An executive order from Gov. Andrew Cuomo demands police agencies complete comprehensive reviews of current practices and policies with input from the community. Failure to comply would be punished by cutting state aid for policing programs.

Gayton said that is good, but if the panel is made up of “the same people” that sit on other city boards — “name one board with a black person on it,” he said — it will be rejected out of hand.

However, Gayton said that if the plans take into account the community’s needs and wants, and offer a significant improvement, the city has a major advantage to adopting change. He said the city has a corps of young officers interested in helping their community and can make those changes.

BEYOND POLICING, the men agreed there needs to be further work to improve the implicit biases among locals and help heal hundreds of years of racism.

“A white person needs to look at another white person and say, ‘Why are things like this?’” Gayton said. “That conversation takes place between you and you — white and white.”

Turner added, “We’ve been having that talk for years,” noting that changes in culture are possible with hard work.

“We eradicated Japanese hate almost immediately after World War II,” he said, with the nation going from interning American citizens who had Japanese ancestry during the war to generally accepting them afterward. “You can do it, but America as a whole — and white America — has to speak the truth.

“You cannot tolerate (racism) at any level,” he said, adding it is up to the individual to call out the coworker or family member who makes a racist comment or joke and encourage them to reflect on their prejudices.

Carney said the black community has its share of internal problems that also need to be rectified.