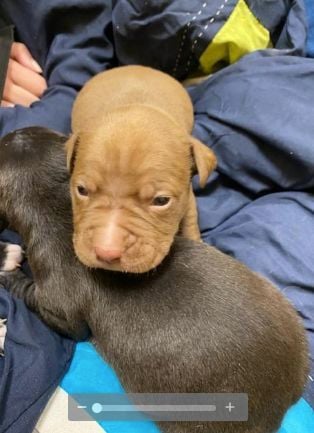 These puppies were among 29 other animals that were taken from a South Second Street house in Olean from owners charged with neglect and other violations. The SPCA in Cattaraugus County found homes for some of the animals and is caring for others. 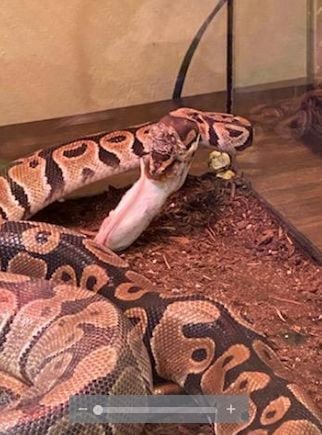 This is one of the snakes seized by law enforcement from a house on South Second Street in Olean and was taken to the SPCA in Cattaraugus County.

These puppies were among 29 other animals that were taken from a South Second Street house in Olean from owners charged with neglect and other violations. The SPCA in Cattaraugus County found homes for some of the animals and is caring for others.

This is one of the snakes seized by law enforcement from a house on South Second Street in Olean and was taken to the SPCA in Cattaraugus County.

OLEAN — An official with the SPCA in Cattaraugus County provided additional information on animals that were allegedly neglected at an Olean household — from dogs, puppies and cats to reptiles and a chinchilla — and seized Friday by local law enforcement agencies.

Jason Berube, manager of the SPCA, said a total of 29 animals were taken out of a house at 136 S. Second St., occupied by Duane A. Lampe, 29, Tonia L. Lampe, 38, and Elizabeth M. Vennard, 19. The three were all charged with neglect, failure to provide sustenance and proper food and water, which are violations of the agriculture and market laws.

The charges were issued by the Cattaraugus County Sheriff’s Office, which removed the animals through a search and seizure warrant. Assisting with the seizure was the Olean City Police and the individuals are facing further court action.

Animals taken and cared for by the SPCA include four cats, two dogs and eight puppies, as well as ferrets, snakes, bearded dragons, rabbits and a hamster, rat and chinchilla.

“This was tied in with the house fire that happened on South Second Street” at the same house earlier in the month, Berube said. “They pulled out 35 dead animals” from the house at the time.

Berube said the Sheriff’s Office asked if the SPCA could take care of, or facilitate care for, the seized animals, which the shelter agreed to do.

“Come to find out that there were a lot more reptiles (than anticipated) but I said, ‘That’s fine, let’s go, let’s get them taken care of,’” Berube said. “Some of them, like specifically the reptiles, we adopted out to people who have the facilities to actually house them.”

Survey: 60 Percent of US Workers Concerned About Their Mental Health in Pandemic's Aftermath

He said the shelter continues to house the ferrets, hamster and rat, and placed the rabbits in foster care as they likely are pregnant.

Berube said a number of the animals were showing signs of neglect when found in the house.

“It was definitely not a situation I would have been happy with,” Berube said of the animals’ care.

“There really wasn’t a proper environment; the female dog and her eight puppies were in a small to medium (size) crate. The reptiles had improper lighting, as well as they were just placed on the floor in cages.”

In addition to a lack of lighting in the house, the animals also had no food or water, he added.

“A lot of the bedding wasn’t changed and it wasn’t a good condition (for the animals) at all,” he continued. “The mom (dog) was very malnourished, so we’re trying to get her all set.”