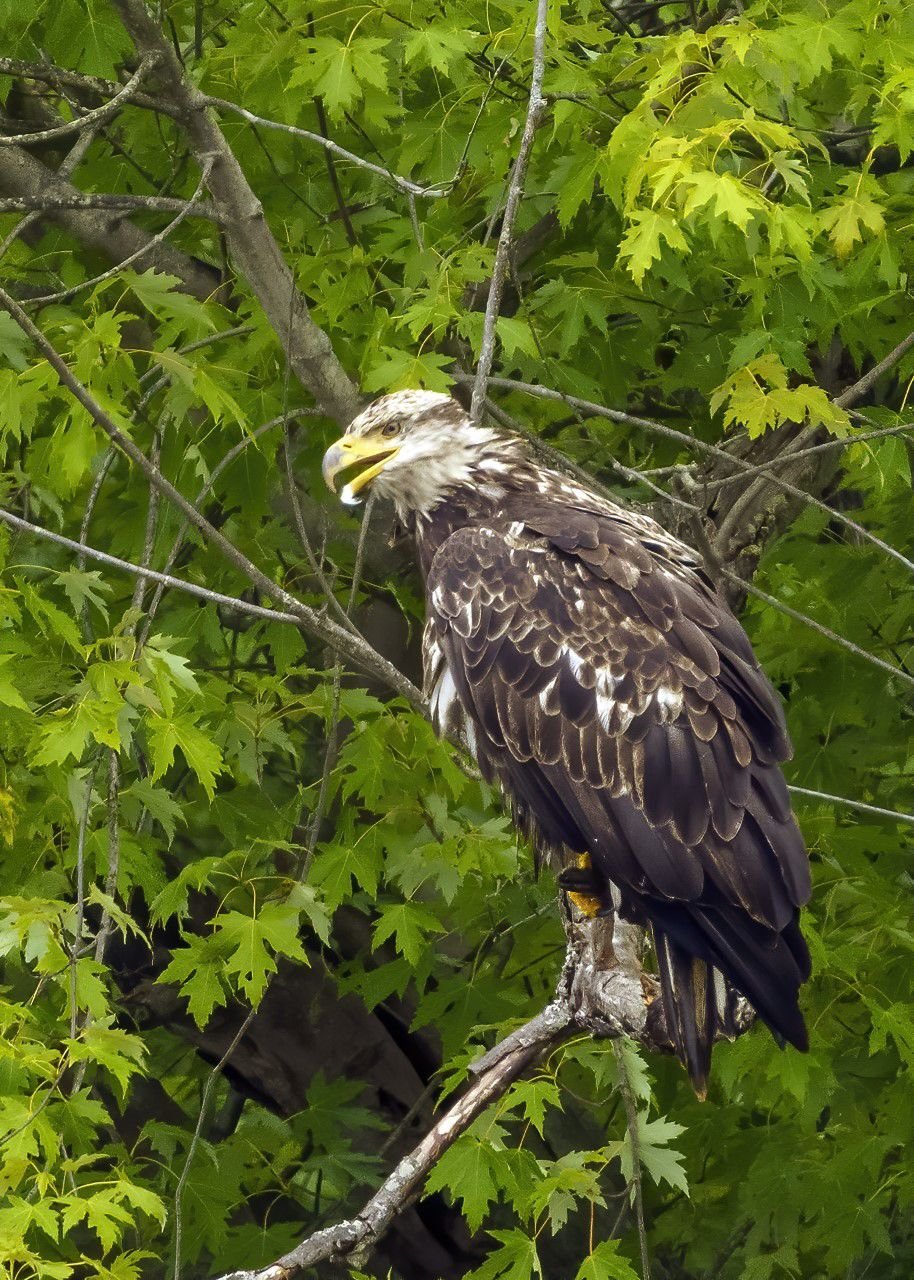 Dan Jordan took this photo in Allegany on the Allegheny River near his home. It’s what he calls a teenage eagle, or sub-adult eagle. 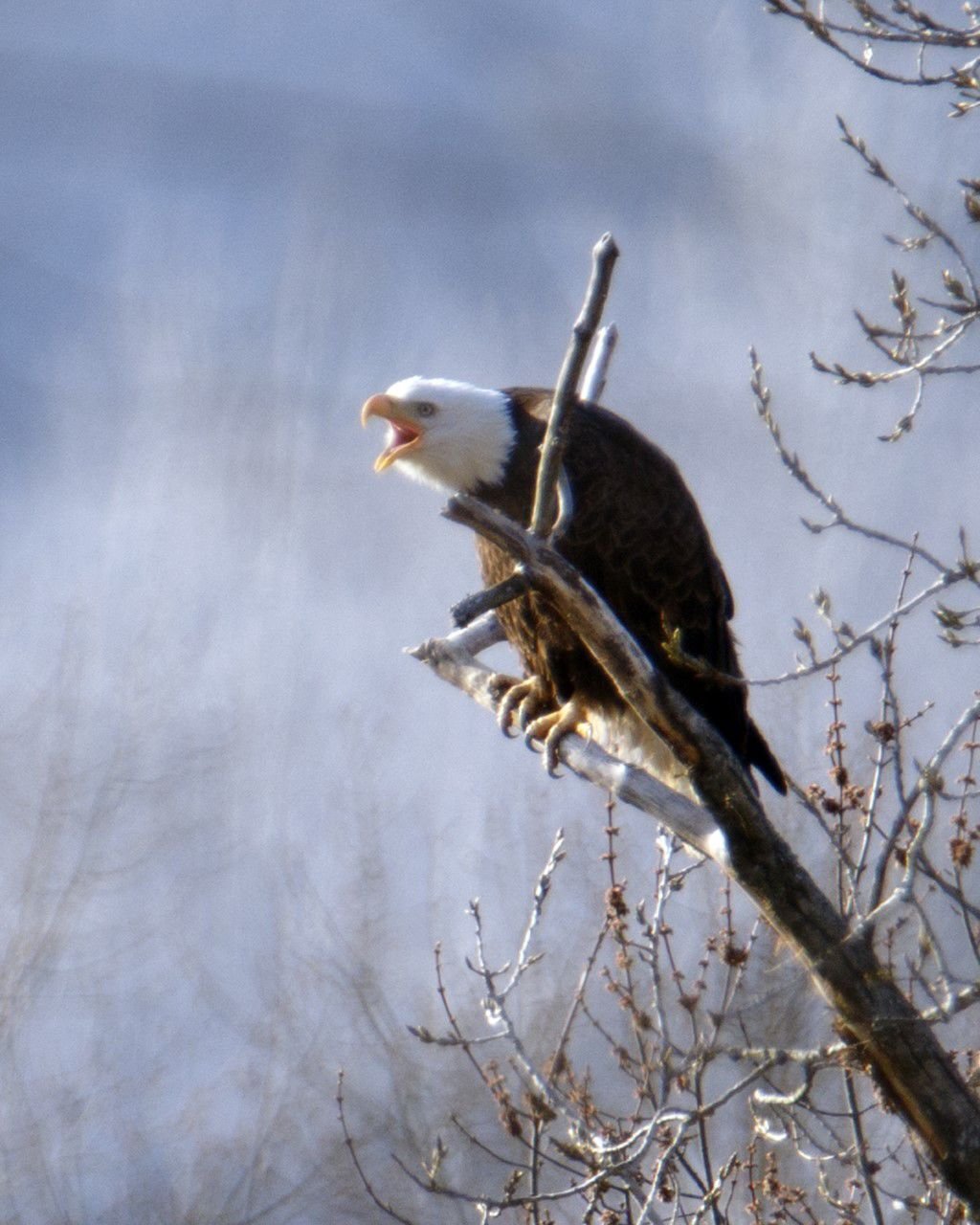 This eagle is calling to its mate. It eventually flew into the nest area and the conversation with its mate continued. 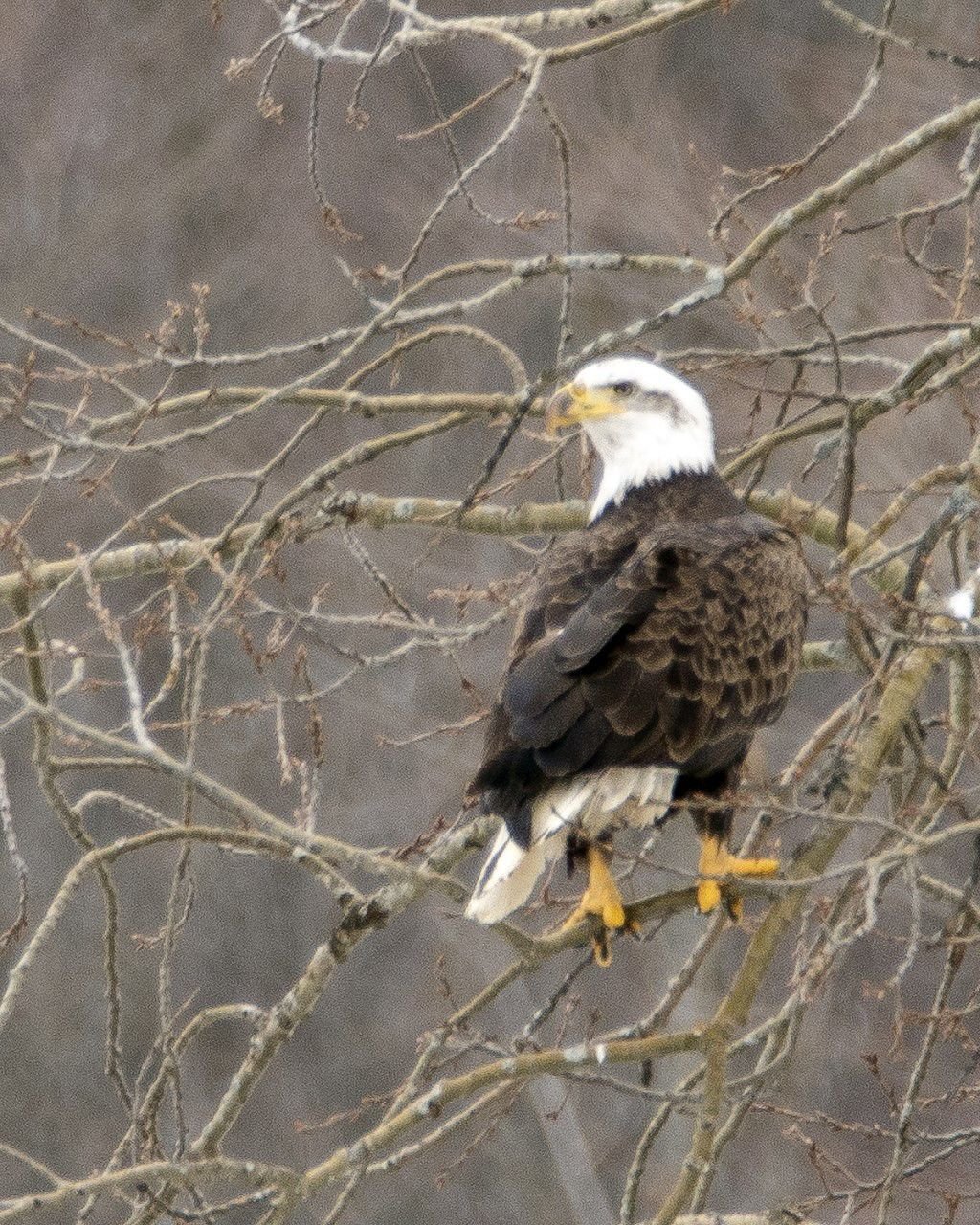 This was eating a porcupine road-kill in the winter in Whitesville.

Dan Jordan took this photo in Allegany on the Allegheny River near his home. It’s what he calls a teenage eagle, or sub-adult eagle.

This eagle is calling to its mate. It eventually flew into the nest area and the conversation with its mate continued.

This was eating a porcupine road-kill in the winter in Whitesville.

Editor’s Note: Local professional photographer and eagle authority Dan Jordan shares his photographs of and experiences with bald eagles in Western New York and northwest Pennsylvania, as well as other locations in the United States.

Today I discuss facts and fiction about bald eagles. As I mentioned in previous installments, in the 1960s the bald eagle was near extinction. Less than 500 mating pairs existed in the United States.

New York’s eagle population was as low as a single mating pair by 1970.

Since their near demise, bald eagles have made big comebacks in many states, including New York. In many cases, New York included, the rebound in population did not come totally naturally. Without human intervention and assistance, they would be way behind the expansion rate they’ve enjoyed.

A process known as “hacking” was used starting in 1976 to reestablish the New York population of bald eagles. Hacking, or hand-rearing to independence, was used to introduce 198 nestling eaglets until the program ended in 1989, having successfully reached its stated goals.

In 2010, the state Department of Environmental Conservation reported that there were 173 breeding pairs in New York, a fantastic success story. The estimated growth rate was 10% more fledged eagles each year compared to previous. More information can be found on the DEC website, dec.ny.gov.

Estimations of population today far exceed the 2010 levels. This can easily be seen in Western and Central New York. I discovered three new nests (new to me) just this week, two in Chenango County in Central New York and another near Albany.

As discussed in previous installments, bald eagles are full-sized when they fledge (fly for the first time). As soon as they fledge, the race for survival begins in earnest. They have precious few months before the winter season, when food becomes more scarce and conditions become harsh, to learn to fend for themselves. They must hone their fishing and hunting skills and learn to avoid danger, mostly manmade challenges to their survival.

Sadly, the mortality rate for first-year juvenile eagles can be as high as 50%. Starvation can happen if they are late-bloomers or if they become injured. Common human causes for eagle deaths are collisions with traffic, electrocution (substations or high power wires) and lead poisoning from eating animals shot by lead munitions or fish which have ingested lead sinkers. Lead poisoning is 100% avoidable if lead shotgun pellets and sinkers were not being used by hunters and fishermen. Lead poisoning is a slow, painful death.

Life in the wild is challenging, even in the best of times. When you see eagles or other large birds of prey, you will often notice smaller birds harassing them. When in groups, as I witness each year when I visit Conowingo Dam in Maryland to see the migrating eagles, enterprising eagles try to steal a meal from any eagle that captures a fish. The battle is often joined by a number of juvenile and adult eagles. I’ve seen quite a few fish dropped by the unlucky owner as a result of this harassment. ‘

Although bald eagles are the top predators in the bird world, they are not without their enemies. Eagle eggs and hatchlings are subject to predation if left alone. Raccoons, bears, wolverines and bobcats, among other mammals, are opportunistic eagle-nest robbers.

Ospreys, hawks, crows, gulls and owls are also potential predators of young eagles. When on the ground, eagles are subject to attack by large cats and wolves. There are some famous YouTube videos of standoffs between eagles and wolves. The ones that I’ve seen show the eagle spreading its wings to look large and not backing down. Eventually the wolf backs down and slinks away. I expect that there are also some encounters in which the eagle does not fare as well.

There are a lot of misconceptions about bald eagles as well. I remember when I was young, a farmer had complained that a bald eagle had carried off a lamb from his farm. Just last week, someone told me that he saw an eagle carrying a whitetail deer fawn. Another friend told me that they had been watching a young eagle on their property and it had “doubled in size.”

Another story is that once an eagle catches a fish, it is unable to “unlock its talons” and they sometimes drown if the fish is too heavy. People tell me just about every week that they see eagle nests on telephone poles or other manmade structures.

Allow me to set the record straight on these myths.

• Bald eagles are strong and elegant fliers; however, their strength is needed to carry their 10-12 pound bodies. They do not have the strength to carry a heavy load beyond their own weight. Estimates range from 4 to 5 pounds maximum payload capacity. This leaves out fawns, lambs (except newborns, I suppose), small dogs, full grown woodchucks and an array of other small mammals as prey. Not that a bald eagle couldn’t kill these animals, but they cannot fly off with them. Bald eagles tend not to kill and eat in place.

• Golden eagles are another story. They tend to kill larger prey then eat where the kill was made. Golden eagles are similar in size to bald eagles and cannot carry a heavier load. As I mentioned in a previous installment, golden eagles hunt wild turkeys, which outweigh the eagle by a large margin. Golden eagles don’t tend to nest in New York and are usually only seen (rarely) during migrations.

• Bald eagles are full-size or very close to it when the fledge. If you see a juvenile bald eagle is it is smaller than an adult or other juvenile, it is most likely a male. Male bald eagles are shorter and weigh about 20% less than their female counterparts. Once they leave the nest, they do not double in size, frankly, they probably don’t grow perceptibly.

• The locking talons is a myth as well. Eagles are good swimmers. I’ve seen it in the Allegheny River in Westons Mills. Should they grab a fish which is too heavy to fly off with, they will swim to shore with it, using their 8-foot wingspan as powerful oars. They also have thick down which is waterproof and allows them to float naturally.

• As to nesting habits, bald eagles rarely use manmade structures for nesting. I’ve only seen one, on Cayuga Lake, and it’s a HUGE structure where eagles took over an osprey nest then increased the nest size threefold. If you see nests on telephone poles, chances are they’re osprey nests. Bald eagles build their nests in sturdy trees, about half to two-thirds the way up the tree. Their nests are added to each year and often weigh up to 2,000 pounds. Many times, the tree will fail, causing the nest to be damaged or fall to the ground. Many eagle pairs keep a backup nest, near to their primary, perhaps to have an insurance policy against tree failure.

• From a distance, ospreys can be mistaken for bald eagles; they both have white heads. I believe this is why people think they see eagles on these telephone pole nests. Keep a pair of binoculars in your car. Magnified, ospreys do not resemble bald eagles.

• Oh, yes, despite their name, bald eagles are NOT bald. They give that appearance because of their white heads.

Eagles can fly very high, some estimates say 10,000 feet. This puts them at peril for airplane strikes. The highest such incidence was in Alaska where the population density of bald eagles is highest in North America.

Bald eagles have incredible vision — some estimates say that it is eight times better than humans’ eyesight. They can see in the ultraviolet spectrum as well. I’ve read articles that claim eagles can see a rabbit from 2 miles when soaring. Another claim is that a soaring eagle can see another soaring eagle from 50 miles. (I guess that’s one way to find a mate!) Their night vision is worse than humans’ due to the structure of the rods and cones in their eyes. Eagles roost at night and rarely fly. The phrase eagle-vision is well-founded; eagles reportedly have the best vision in the animal kingdom.

Bald eagle talons are formidable weapons. Besides being long and sharp, they can exert 1,000 pounds per square inch in force. Once a fish or a small mammal is grabbed, the end is swift.

Bald eagles have up to 7,000 feathers on their bodies, all 7,000 are illegal to possess by any non-Native American. Eagle feathers are composed of keratin, similar to human hair and nails.

It’s that time again, to share some photos. The first is very interesting. I took this photo in August in Allegany on the Allegheny River near my home. It’s what I call a teenage eagle, or sub-adult eagle.

If you recall, I wrote in an earlier installment that bald eagles do not get their trademark white feathers until year 4 or 5. This eagle has started to get its white feathers but is by no means an adult. Next year, it will reach adulthood and be searching for a mate.

The second photo is of one of the Vandalia pair. It shows the eagle calling to its mate. The mate was a few hundred yards away calling back. It eventually flew into the nest area and the conversation continued.

My wife and I were at Alma Pond a couple of years ago and we spotted an eagle so I stopped the car. We could hear a pair of eagles calling to each other and I said, “ don’t see the other, do you?”

It turned out that we had each spotted different eagles and were watching them, thinking that we were seeing the same one. When we realized our error, we discovered that they were 50 yards apart just a talking away.

The last photo is an eagle we spotted in Whitesville. It was eating a porcupine road-kill in the winter. Now, there’s a dangerous pastime, eating a quilled-mammal. It left the porcupine corpse and flew to a tree to pose for photos.

This eagle was not one of the Whitesville nesting pair. We know this for two reasons. One, as you can see by its head feathers (not quite all white) and from its beak (not yet orange), this eagle had not quite reached adulthood. Plus, when we got to the Whitesville nest, a mile or so away, both of the pair were on the nest.

(If you have any information about local eagles and/or nests, or if you have questions, email Dan at dan@jordanphotog.com.)