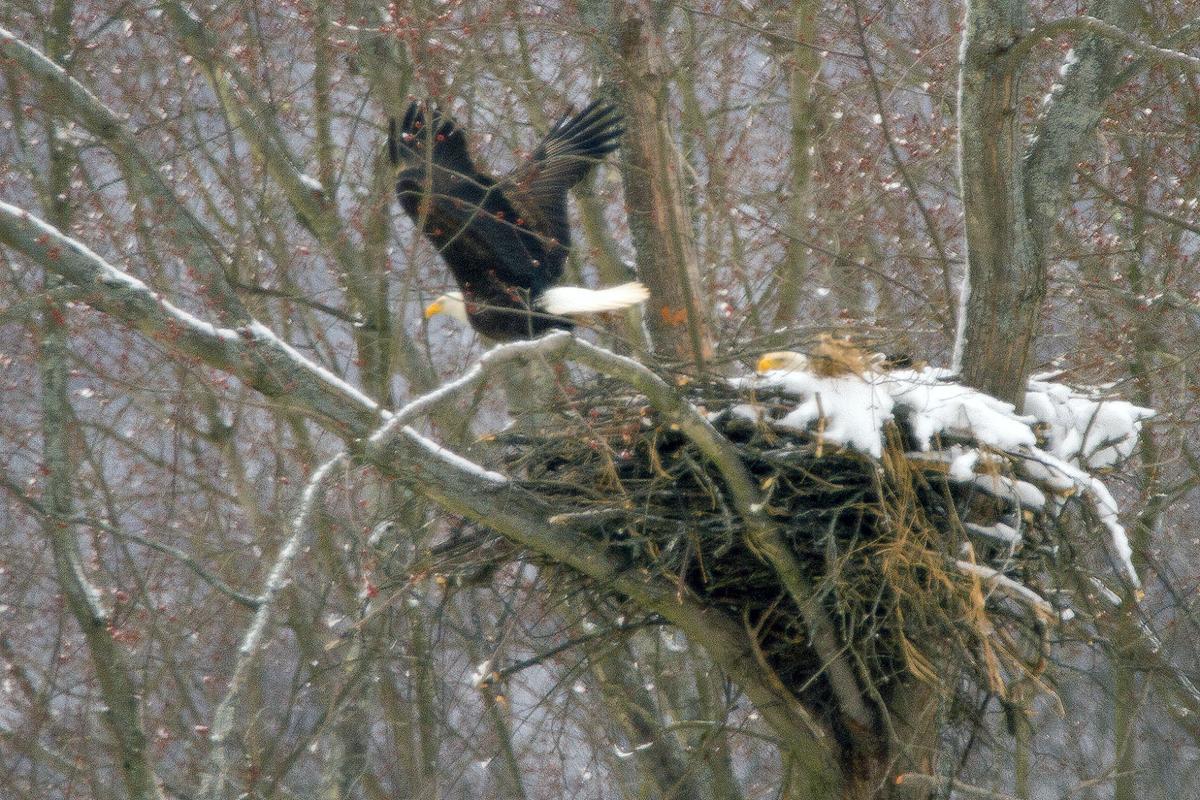 This photo shows the Salamanca nest on March 3, 2018. Winter still prevails, yet the pair were at the nest. Look closely at the nest to see the head of the second eagle. 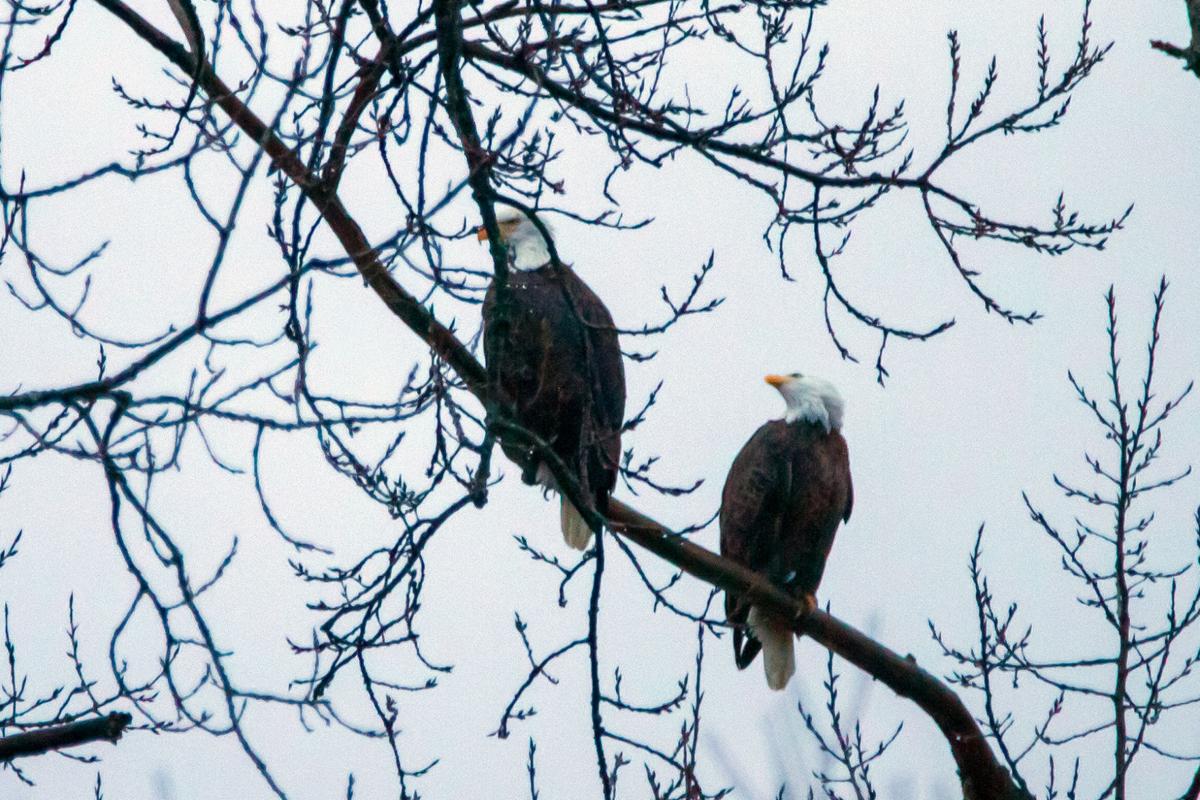 This photo shows a Belvidere pair of eagles on Dec. 23, 2017. The pair were sitting above their nest. 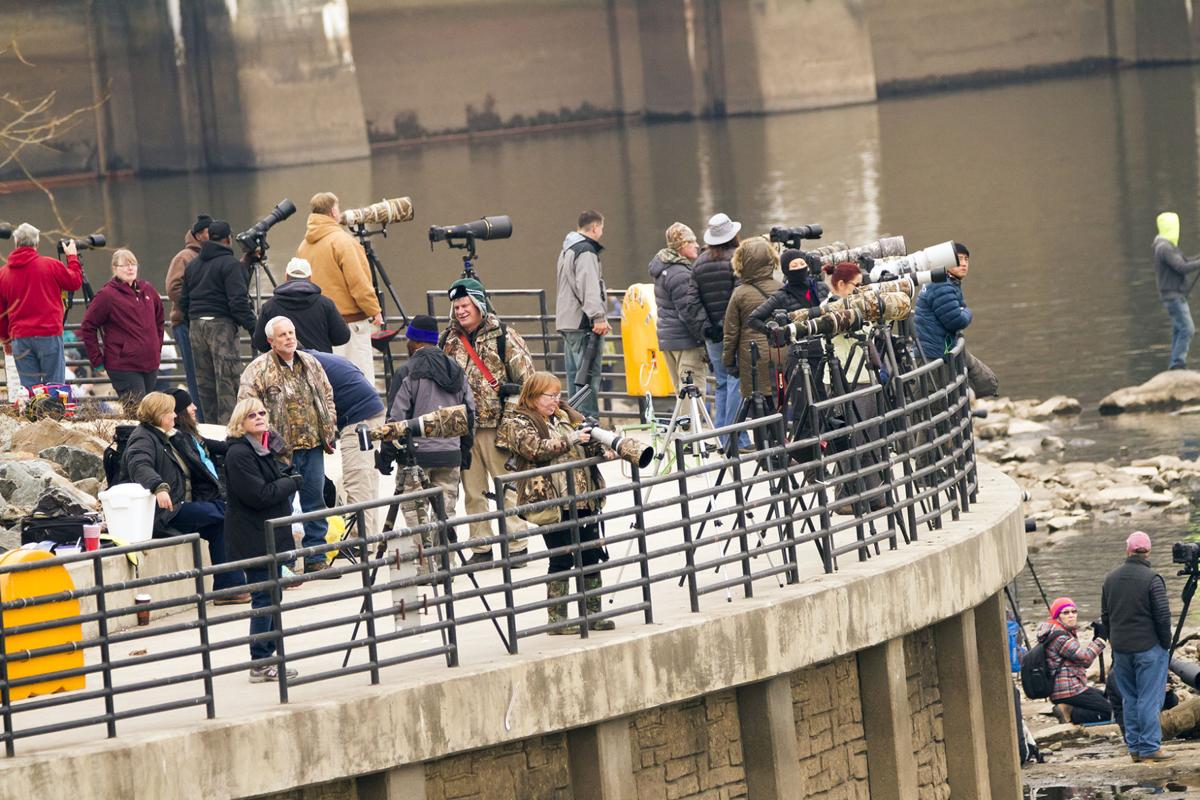 A large group of photographers is shown at the Conowingo Dam in Maryland the day after Thanksgiving 2016. The dam is a prime eagle-watching site in late fall.

This photo shows the Salamanca nest on March 3, 2018. Winter still prevails, yet the pair were at the nest. Look closely at the nest to see the head of the second eagle.

This photo shows a Belvidere pair of eagles on Dec. 23, 2017. The pair were sitting above their nest.

A large group of photographers is shown at the Conowingo Dam in Maryland the day after Thanksgiving 2016. The dam is a prime eagle-watching site in late fall.

Editor’s Note: Local professional photographer and eagle authority Dan Jordan shares his photographs of and experiences with bald eagles in Western New York and northwest Pennsylvania, as well as other locations in the U.S.

This will be the last edition of the Eagle Whisperer series for 2020. Given the season change, I will focus this edition on the wintering habits of bald eagles — at least eagles that reside in the colder climates of North America.

Bald eagles depend on fish as their primary food source. This is problematic when the waters in their home range freeze over in the winter. As winter approaches, eagles start to change their focus from fishing to hunting small mammals, waterfowl and even carrion.

Even then, it’s difficult to replace their fish diet. I start to see more eagles soaring over the fields and hillsides this time of year, indicating their change of food source. I’ve yet to photograph an eagle with a squirrel or rabbit in its talons, but am sure that my chance will come up one day.

As is the case with most wildlife, each eagle’s existence is tenuous. Eagles must eat regularly to survive. They do not need to eat every day, but will soon weaken if they do not keep a regular intake of food. Eagles can consume a pound of fish in about 4 minutes. When their stomach is filled to capacity, they have the ability to store extra food in an outcropping of their esophagus, called the crop. This becomes more important in cold weather, especially when food is scarce.

Keeping warm in foul weather uses more calories so eating regularly becomes more critical as the weather gets colder. What does one do when one can no longer fish? One seeks alternatives, like mammals. What does one do when one cannot sustain life hunting for mammals? One will seek carrion. Way back when lore tells us that Benjamin Franklin lobbied for the turkey to be our national bird, supposedly one of the arguments against the bald eagle was that eagles were lowly scavengers and not worthy of that lofty title.

Such is the case, but it is driven by need to survive, and scavenging is surely not the preferred method of gathering food. It is estimated that fish comprise up to 80% to 90% of a bald eagle’s diet. Mammals, water fowl and small animals (frogs, snakes, lizards, etc.) make up 7% to 15%. That only leaves a meager few percent for carrion. I’m sure that this ratio changes seasonally, but it is clear that bald eagles are fish-first when possible.

So as seasons change toward winter, and food becomes more and more scarce, most bald eagles whose primary water source freezes over, will migrate to the south or east, where open water is plentiful. Most scientists do not consider these behaviors as migratory, they call them seasonal movements. This is due to the fact that in mild winters, the eagles do not leave. More on these seasonal movements in a bit.

When we’re hunkered down in our heated homes in the dead of winter, eagles that have not flown south must endure the wintry conditions. How do they do that? According to the National Eagle Center in Wabasha, Minnesota, bald eagles take proactive steps when winter storms approach. They’ll leave their regular perches along a river or lake and temporarily move to a coulee (I had to look this up, it means a ravine or gully) or in a tree nestled up against a bluff or cliff. These tactics reduce the exposure to high winds and elements as directly.

If either of these strategies are not possible, they will look for a dense stand of trees which provide a wind break. The National Eagle Center goes on to explain that a bald eagle has more than 7,000 feathers that provide excellent insulation from wind, rain and snow. That said, as I stated above, the calorie burn to stay warm is significantly higher as the weather gets colder, necessitating more food intake.

Eventually, northern bald eagles face a decision. Their fishing water source has frozen. Mammals and waterfowl are scarce, carrion is not as available as needed. Inevitably, they will leave their home range in search of open water. Flying burns large quantities of calories whereas soaring is very efficient. In order to soar, sunshine-created thermals need to be present. It is not uncommon for “migrating” bald eagles to spend a day or two waiting out bad weather in an area before picking up thermals and moving on. I observed this on Thanksgiving Day two years ago, when there were four adult bald eagles perched very close together on the Allegheny River in Allegany.

Our local eagles vary in behavior. In 2018, the Belvidere eagles never left. Their water source, the Genesee River, did not freeze and they were observed at their nest in February. That same year, the Ischua eagle pair (Ischua Creek) were last seen on Christmas Eve and not again until March.

So, where do eagles go to winter? The answer is, it depends. For example, Midwest bald eagles follow the Mississippi River basin south until open water and suitable roosting is available. Overcrowding can happen, which increases competition and aggressiveness, so many will continue south until conditions are suitable. Northeastern eagles (our friends included) often go as far south as Virginia. That said, in a milder winter, they may stop in Pennsylvania.

There is a very popular wintering site (for eagles and photographers alike) along the border of Pennsylvania and Maryland, called the Conowingo Dam, which I have mentioned before. I personally make a “seasonal movement” to Conowingo each winter to photograph eagles. This site is ideal for seeing hordes of eagles — my first year I saw more than 200 at one time and had to stop counting because I was missing photo ops.

The Conowingo Dam is a power-generating facility and when the gates are opened, a lot of the shad are stunned or knocked unconscious as they pass through the generator. These float to the surface and are easy pickings for the eagles.

(Note: you may also see hordes of photographers and have trouble parking, depending on time of year and weather conditions.)

So, when will our eagles leave for warmer climes? Impossible to predict that far out, no matter what the Old Farmer’s Almanac may tell you. If this winter is mild enough, they may not leave at all. Eagles with nests on smaller water (like Alma Pond, Wellsville, Oil Creek, Cuba or Ischua Creek) will likely leave before those on larger water.

Regardless of when or if they leave, unless something bad happens during their travels, they will be back in by March to get their nests ready for the next breeding season. Even juveniles, which have neither mates nor nests, tend to return to the same general area until adulthood, when they take a mate and search for that perfect nesting site.

It has been a real pleasure sharing my photos and knowledge of bald eagles with you in this series. Awareness of these majestic birds, our national symbol, is critical for their continued survival. To me, it also sparks a patriotic chord, something we all can use more often. Thank you for reading and for sharing your bald eagle sightings and experiences with me.

If you have any information about local eagles and/or nests or if you have questions, please email me at dan@jordanphotog.com.