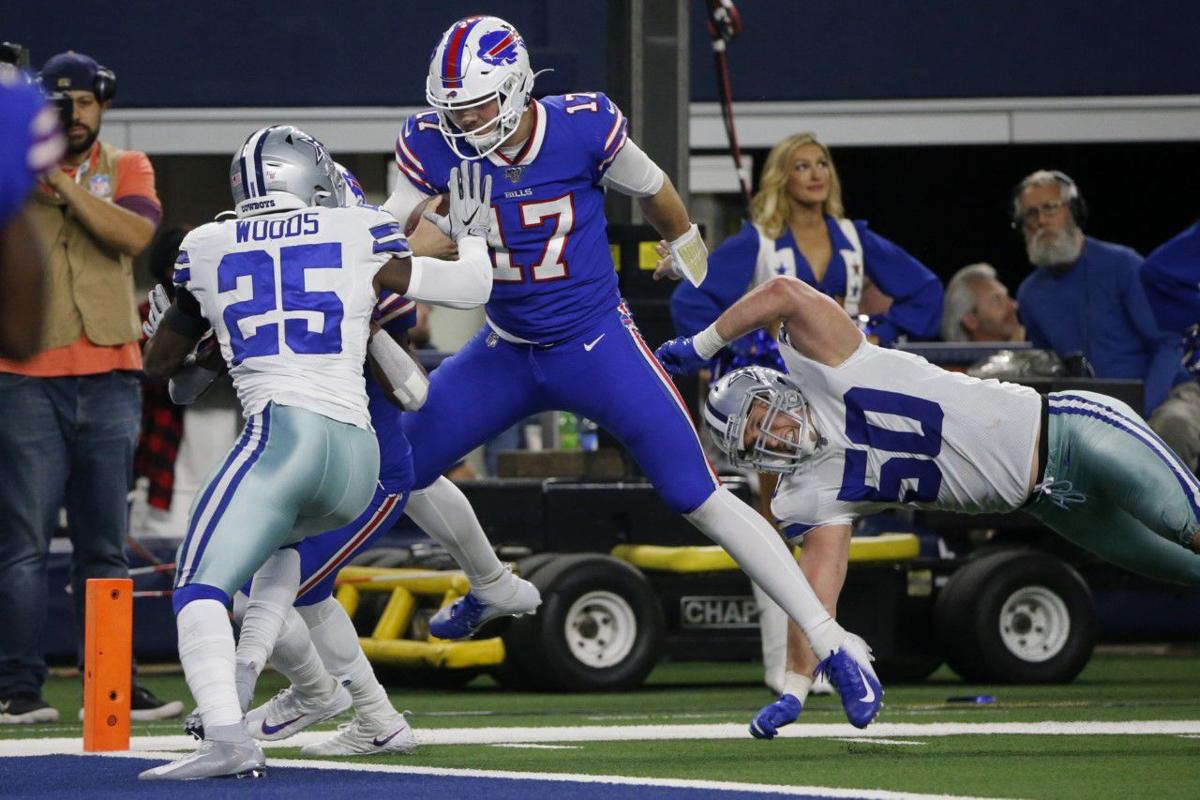 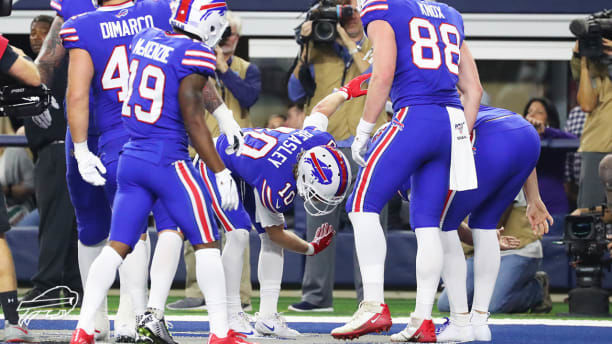 Buffalo wide receiver Cole Beasley (10) celebrates with teammates after scoring a second-quarter touchdown against Dallas, his former team, in an NFL game on Thursday at AT&T Stadium in Arlington, Texas.

Buffalo wide receiver Cole Beasley (10) celebrates with teammates after scoring a second-quarter touchdown against Dallas, his former team, in an NFL game on Thursday at AT&T Stadium in Arlington, Texas.

Talk about emphatically answering every criticism and doing it on the biggest stage, before the largest audience of the season.

Ever since the season opener in the Meadowlands, when the Bills had to score 14 points in the final 4 ½ minutes to nudge past the Jets, 17-16, we media-types have been urging fans to pump the brakes.

As Buffalo won eight of its first 11 games, the faithful were reminded — often — that it had not beaten a team with a winning record at the time the game was played and that in four of those victories it was either behind (twice), even or up by only a field goal in the fourth quarter.

Worse, the Bills were playing the NFL’s toughest schedule over the season’s final five games, including a brutal stretch of four straight: at Dallas (6-5), home with Baltimore (8-2), at Pittsburgh (6-5) and at New England (10-1).

Conventional thinking was that Buffalo could easily lose all four and would need a home win over the Jets to finish 9-7 and hope for a beneficial position in the tiebreaker to sneak into the playoffs.

Ah, but what a difference one impressively efficient and unexpected performance makes.

THE BILLS, coming off a short week, went into Dallas and eviscerated the reeling Cowboys, 26-15, in a Thanksgiving afternoon meeting that was in no way as close as the score.

In what will rank as one of the most memorable victories in Buffalo franchise history, CBS play-by-play man Jim Nantz summed it up best: “These Bills are for real.”

And, as of Thursday, that’s hard to argue.

At 9-3, tying their best start in 24 years, Buffalo is the No. 1 AFC wild card and the conference’s fifth seed if the playoffs started after this weekend’s games. Suddenly, even if they lose the next three, should the Bills beat the Jets in the season finale to go 10-6, it’s hard to believe that record isn’t playoff-worthy in a down year for the AFC.

BUT WHAT stands out about yesterday’s performance is that the Bills answered the critics in impressive fashion, on the road, in a short week, against a quality, albeit reeling opponent, before a national TV audience.

Oh, they weren’t perfect — there were the obligatory wasted timeouts, less-than-stellar placekicking and a couple of dumb and hurtful penalties — but the collective effort was decidedly superior to any this season, and at the perfect time.

Quarterback Josh Allen, still desperately trying to prove he’s the franchise QB fans have been pleading for, was outstanding.

If ever there was a game when the flaws of the second-year pro figured to be exposed, it would be this one.

Instead, the former Wyoming star was a glittering 19-of-24 passing for 231 yards with a touchdown, no interceptions and solid 120.7 passer rating. He was sacked four times, but didn’t fumble and rushed for his eighth touchdown in a dozen games, this one a 15-yarder.

Buffalo’s defense wasn’t stifling, surrendering 426 yards, 70 more than its offense gained, but it turned the Cowboys over twice and sacked quarterback Dak Prescott four times. And, after giving up an easy touchdown on Dallas’ opening possession, didn’t give up another TD until the oh-by-the-way score when four minutes remained.

WHAT MADE this win so impressive is that the Bills reversed the popular perceived script.

Red Zone podcast: How the Badgers will fare in the NFL draft and how the hoops team hitting the homestretch

The thought was that playing on a short week, at an iconic venue against a quality foe before a national audience, youngsters Allen and Singletary would fall victim to the pressure. Even the “experts” thought the only way Buffalo would get a win would be to get an inspired performance from the defense and have everything go their way.

It didn’t … but that wasn’t an issue, as the Cowboys were totally outplayed after their first possession.

Meanwhile, what many thought would be an added edge for Dallas seemingly turned out to be a detriment.

When owner Jerry Jones blasted the coaching staff after last Sunday’s 13-9 loss at New England, the assumption was that the Cowboys would play with sparks coming out of their backsides against Buffalo. Instead, after the opening drive, they seemed indecisive, out of sync and a beaten team.

When the game ended, speculation was that Jones might fire head coach Jason Garrett.

But, even with the loss, Dallas is 6-6 and atop the weak NFC East. And should Philadelphia win at Miami Sunday, as expected, the Cowboys would still be in a first-place tie.

Supposedly, Jones has indicated Garrett will last through season’s end, given his reluctance to axe a coach who’s in first place … especially without an heir apparent on the staff.

Then there’s McDermott, who notched a victory that further solidified his job security and gave Bills fans a win they won’t soon forget.

(Chuck Pollock, a Times Herald senior sports columnist, can be reached at cpollock@oleantimesherald.com)