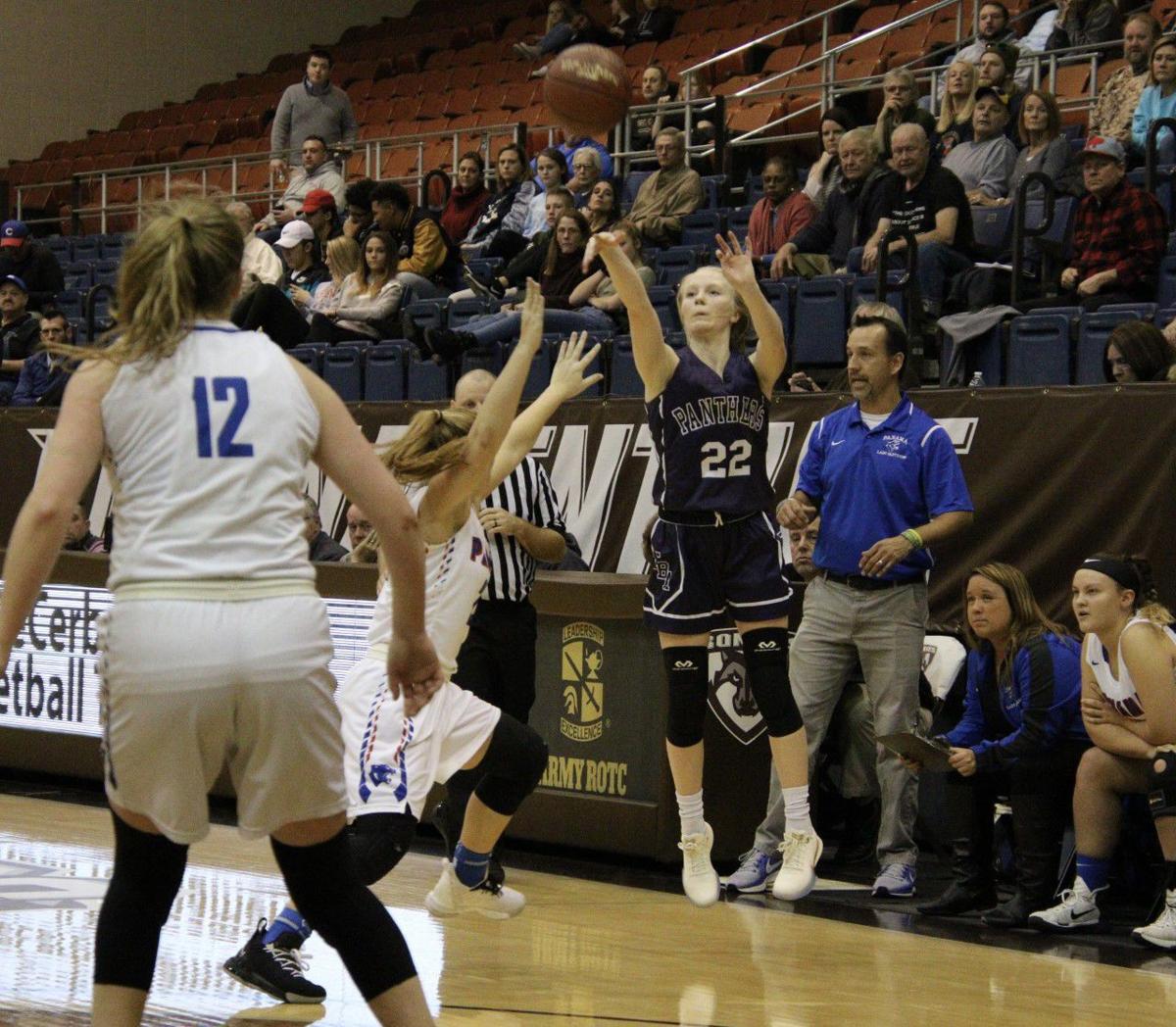 Franklinville’s Dani Haskell (22) takes a deep 3-point shot in front of the Panama Bench during Sunday’s Casey Jones championship game in the Joe DeCerbo Memorial Tournament inside the Reilly Center. 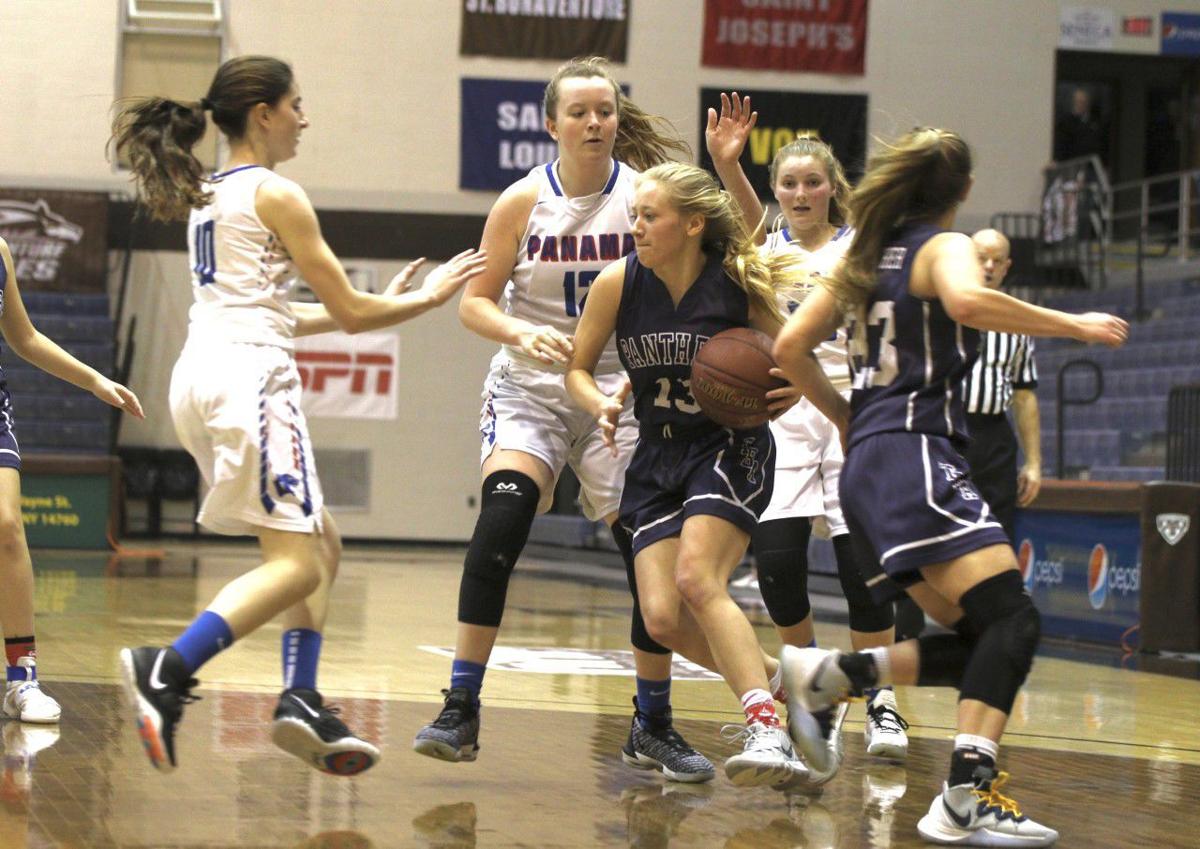 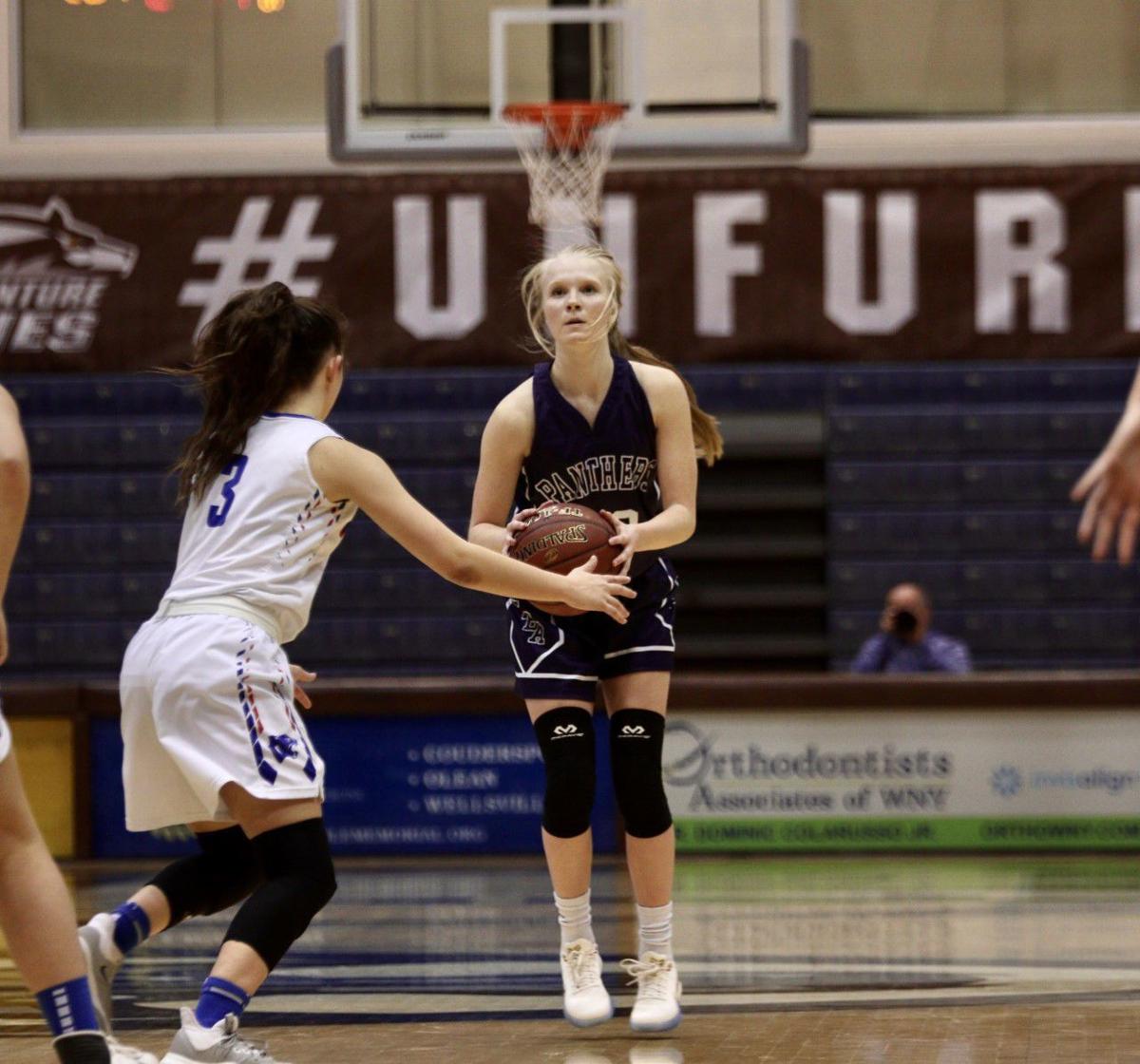 Franklinville’s Dani Haskell pulls up from deep to attempt a 3-point shot against Panama in Sunday’s Casey Jones championship game in the Joe DeCerbo Memorial Tournament inside the Reilly Center. 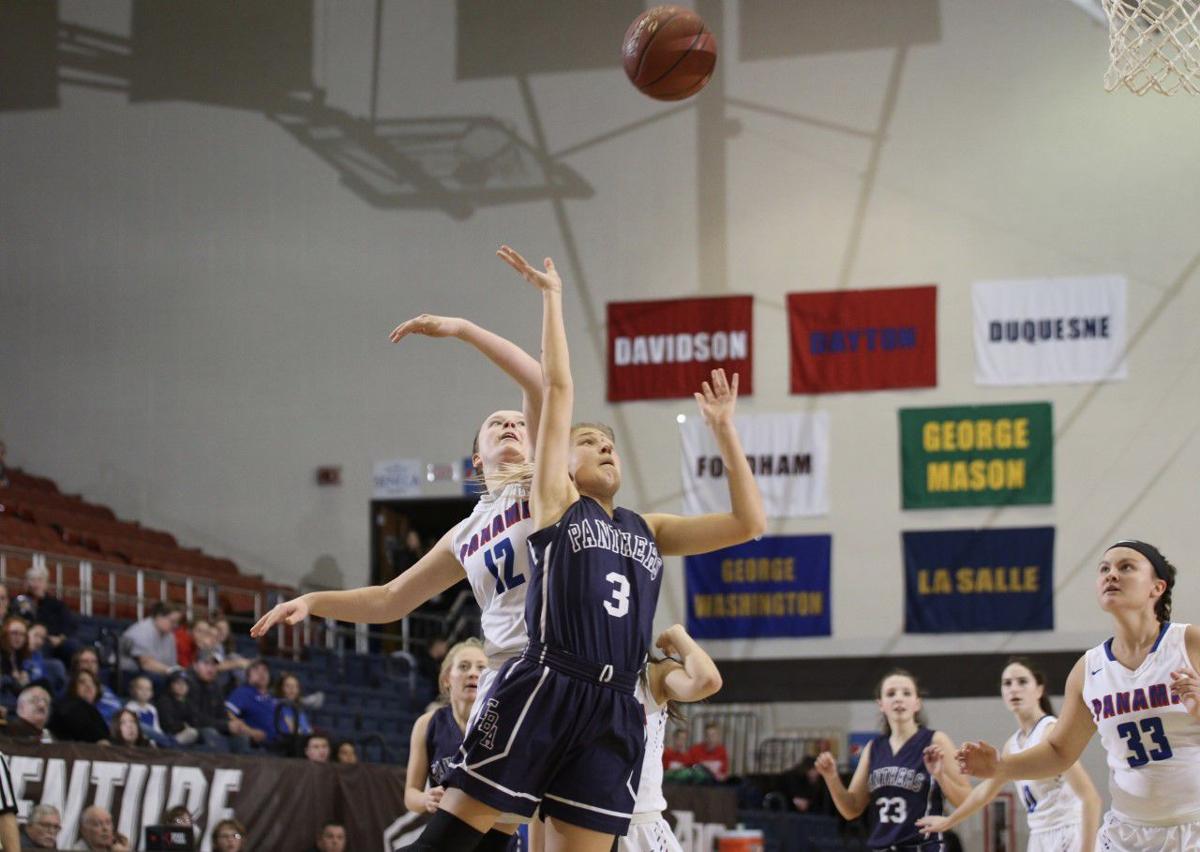 Franklinville’s Gabby Milligan (3) puts up a shot during the second half against Panama in the Casey Jones championship in the Joe DeCerbo Memorial Tournament on Sunday in the Reilly Center.

Franklinville’s Dani Haskell (22) takes a deep 3-point shot in front of the Panama Bench during Sunday’s Casey Jones championship game in the Joe DeCerbo Memorial Tournament inside the Reilly Center.

Franklinville’s Dani Haskell pulls up from deep to attempt a 3-point shot against Panama in Sunday’s Casey Jones championship game in the Joe DeCerbo Memorial Tournament inside the Reilly Center.

Franklinville’s Gabby Milligan (3) puts up a shot during the second half against Panama in the Casey Jones championship in the Joe DeCerbo Memorial Tournament on Sunday in the Reilly Center.

The shot, naturally, found nothing but net.

If this weekend was any indication, the star senior for the Franklinville girls basketball team is starting to feel like herself again.

A day earlier, Haskell set the Joe DeCerbo Memorial Tournament scoring record — for either gender — racking up 40 points in her first game since missing a pair of contests due to an illness to lead the Panthers to a 58-50 first-round win over Allegany-Limestone. On Sunday, she outdid even herself.

Haskell poured in a career-high 45 points, including 30 after halftime and 19 in the fourth quarter, to lift Franklinville to an exciting 58-52 victory over old nemesis Panama in the championship game of the Casey Jones Bracket inside the Reilly Center.

The Canisius commit drained nine 3-pointers and went 14-of-14 at the line as part of that performance. In the fourth, she scored 17-straight points for the Panthers, including a personal 14-0 run that helped Franklinville turn a 47-41 deficit with 4:09 remaining into a 55-47 advantage with 48 seconds left.

And after a 1-3 start, which included losses by 27 and 13 points in Haskell’s absence, Franklinville clawed back to .500 (3-3), brought home a tournament title and knocked off the previously unbeaten Panthers, who entered the game ranked No. 1 in the state in Class D.

“NOTHING surprises me (with Haskell),” Franklinville coach Allan Dunlap said with a laugh. “She didn’t get any great looks; everything she gets, she earns. In the fourth quarter, we made an adjustment and ran triple high screens for her.

“It’s hard for kids to communicate (on those screens), but Dani’s so savvy, she’s able to take advantage of that and pop back at the right time, knife through at the right time and slide so that she gets an open look. She was able to do that and she caught fire.”

Behind Haskell, Franklinville rallied from an early 23-12 deficit and a 26-20 hole at halftime to tie it at 38 entering the fourth quarter. Aside from the 5-foot-7 guard’s offensive explosion, marked by one deep 3 after the next, the Panthers used a strong defensive effort to come out on top.

In a way, it was a rubber-match victory for the defending Class D state champion Panthers, who’d met Panama in the Section 6 Class D title game in each of the last four seasons, with each winning a pair (Panama in 2016 and ‘17 and Franklinville in 2018 and ‘19).

“WE SWITCHED and played man-to-man (on Schnars) in the second half, to try to limit the easy shots that she was getting,” Dunlap noted. “We actually put Dani on her (who, in this way, made just as big of an impact defensively) and just said, ‘if she posts up, we’re going to try to come and double whenever we could to help out.

“Dani is a really good defender. As good as she is offensively, she’s stronger than people give her credit for. She lifts her tail off all the time, so I had no worries about her guarding a post player.”

Haskell, who accounted for 73 percent of her team’s scoring over the weekend, was named the tournament’s MVP. She was joined on the All-Tournament Team by teammate Abby McCoy, Tierney Hemphill (Allegany-Limestone), Karly Welty (Portville) and Angeletti and Schnars.

After trailing 55-47 in the final minute, Panama pulled to within four (56-52) with 22 seconds left and had a chance to make it a one-score game, but missed three shots on its final full possession. Franklinville, meanwhile, picked up what could be a pair of season-altering victories.

“It’s been hard for a couple weeks with not having Dani there because she carries such a big load on our team,” Dunlap acknowledged. “(But the) kids stepped up. We got better over those two weeks because kids had to do things that they normally don’t have to do ...

“It’s always a nice win to beat Panama — they’re such a well-coached, talented team. It’s a nice little springboard for us to jump into our league play coming really soon.”

ST. BONAVENTURE — Portville had a tough time scoring in both games of the former IAABO Tournament, but survived those struggles on Sunday.

Braves 1B Freddie Freeman says elbow swelling not a concern

A day after suffering its first loss of the season (41-37 to Panama in the first round), the Panthers rallied from a poor start and an 18-9 halftime deficit to earn a consolation title and move to 6-1.

In the end, the Panthers won despite shooting just 12 percent in the first half.

“We threw on a press, hit a couple of 3s and had some passes to posts down low who were able to finish at the rim,” PCS coach Inga Welty said of her team’s fourth-quarter surge. “With the injury to Mia Welty in the first game of the season and not having big numbers, two JV players (Bentley and Teagan Kosinski) have been getting quality minutes. Lilly, an eighth-grader, came up with a huge steal on our press and had a great seal on her defender the very next play to help Karly get to the bucket for a layup to tie the game and send it into overtime.”

In OT, Bentley finished an offensive rebound putback on Portville’s first possession before Kosinski nailed a baseline 3-pointer. Later, Welty drove the lane before dishing to Bentley, who dropped in an easy layup.

The Panthers’ defense made those three baskets hold up.

“I was very proud of the two young girls being thrown onto the big stage at St. Bonaventure and the way they played tough defense and came up with key baskets when the team really needed them,” Welty said. “I hope those two gained some confidence playing in two competitive games against quality programs. Obviously, they won’t be playing on the JV team anymore.”

Gianna DeRose had 10 points, Tierney Hemphill had nine points and seven rebounds and Taylor Davis pulled down 10 boards for the Gators (2-4), who dropped a 58-50 decision to Franklinville in the first round.