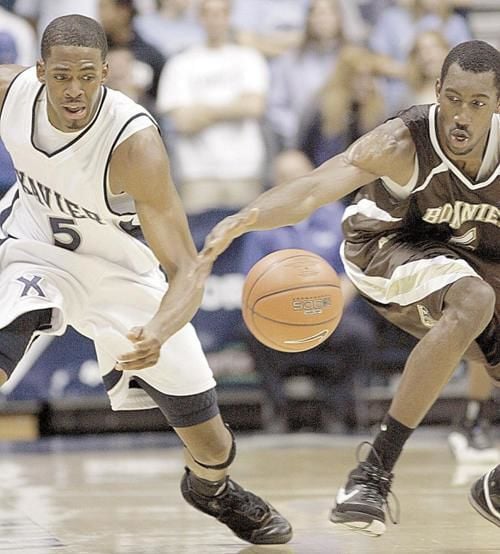 (Editor’s note: This is the first in a two-part series with former St. Bonaventure basketball standout Michael Lee. Today: Lee’s recollection of the hiring of current coach Mark Schmidt.)

In early March 2007, the 6-foot-8 forward wrapped up his junior season at St. Bonaventure, the third under Anthony Solomon, averaging 13 points and seven rebounds for a team that finished an unsightly 8-19.

One month later, nearly to the day, he had a new coach, a guy he’d never heard of before … a coach by the name of Mark Schmidt.

“I really didn’t know who he was; who is he?” remembered Lee, who first caught word of the new hire in a text from teammate Tyler Relph. “He’s from Robert Morris, he used to be an assistant at Xavier. I said, ‘OK, interesting.’

“I really didn’t have anything else to go off of besides from what Tyler told me and a little bit of research that I did.”

Lee had already made a commitment to himself and his team, deciding that he’d stay on campus over the summer — rather than return to his hometown of West Palm Beach, Fla. — in order to enhance his focus on a strong final season.

He was soon joined in those workouts by Relph.

Together, the duo worked out in an empty Reilly Center, preparing for significant change while pondering their future as players. Very quickly, they also made a commitment to their new coach.

“(Tyler and I) decided: We’re just going to work this out, finish this off strong. And from there, we kind of established it from that point on.”

THE SHIFT in attitude, in expectations of guys such as Lee, a gifted player who’d been grounded by his teams’ struggles, was immediate.

And, as legend has it, to one of the first practices for that inaugural season.

As the story goes, Lee was having a tough practice, falling short of Schmidt’s newly-established standard. In response, the first-year coach reportedly stopped play, punted the ball into the red seats and reminded his star forward, adding a couple of choice words for emphasis, that he played for St. Bonaventure … the new St. Bonaventure.

Those words presumably had the desired effect.

Lee realized his full potential as a senior, averaging an impressive 18 points and eight rebounds as the focal point of the new-look Bonnies. And though it didn’t necessarily reflect in wins and losses early on (Bona went 8-22 that year), clearly things were different.

“Coach Schmidt is a specialist in putting the types of players that he has in the right position,” Lee said. “He’s a genius at analyzing players, their skill sets and what they can do well and putting them in the best position to succeed on the court.

“With me, I can do a little bit of everything, and he saw that, and he gave me an opportunity to show it.”

IN SPRING 2007, Schmidt was still a relatively unknown coach, attempting to make the jump from the low-major Northeast Conference to an Atlantic 10 team still very much buried in the basement.

Thirteen years later, he’s built Bona into one of the best programs in the league, solidifying his place in program lore along the way.

And Lee — before Andrew Nicholson, before Chris Matthews and Jonathan Hall — was his first true building block.

“I also appreciated how he took advantage of … you have to prove that you can play. And if you can play, he’ll let you play.”

Lee, one of the most talented players from the most trying era in program history, could certainly play, finishing his career with 1,427 points and 684 rebounds, numbers that still rank 17th and 14th, respectively, in Bona annals.

It’s led many to wonder how things might have been different for the Florida native had he been able to play all four years under Schmidt.

Lee, in fact, had that conversation with former Bona assistant (and proven big man coach) Dave Moore during that first year under the new regime.

“He said, ‘Man, Mike, if I had been here a couple years ago, you would have been an NBA player,’” Lee recounted. “You can kind of see that along with the way he developed Andrew Nicholson.

“I remember watching those guys the year they went to the (NCAA Tournament in 2012). Those same plays (Schmidt) used to run for Andrew, he would run for me. I would see he’d run a baseline screen, set up a shot, he’d have those same offensive plays. I would kind of laugh when I watched the play because I knew what was coming when they had it set up.”

Lee, who said he appreciated the sentiment, might agree.

After all, he did go on to play with the Sacramento Kings’ summer league team and earn a training camp invite with the Cleveland Cavaliers.

“I think we would have done pretty well,” he said, envisioning four years of development under Schmidt.

He made it clear, though: He doesn’t regret how his Bona career panned out. To Lee, one of two mid-2000s players to make the program’s All-Time Team ballot (alongside Ahmad Smith) despite the era he played in, it all happened the way it was supposed to.

“No, because Coach (Anthony) Solomon was a great man,” he stressed. “He came to my house, he recruited me. I had a couple other schools that were interested, and he came with a game plan and a philosophy where he thought I could help and be a part of it, and I chose to go.

“Certain things happen for a reason. In college athletics, you gotta win, and if you don’t win they’re looking for the change. Unfortunately, we weren’t able to execute like we wanted to while he was there, and so you just gotta take your lumps and keep it moving, you know?”