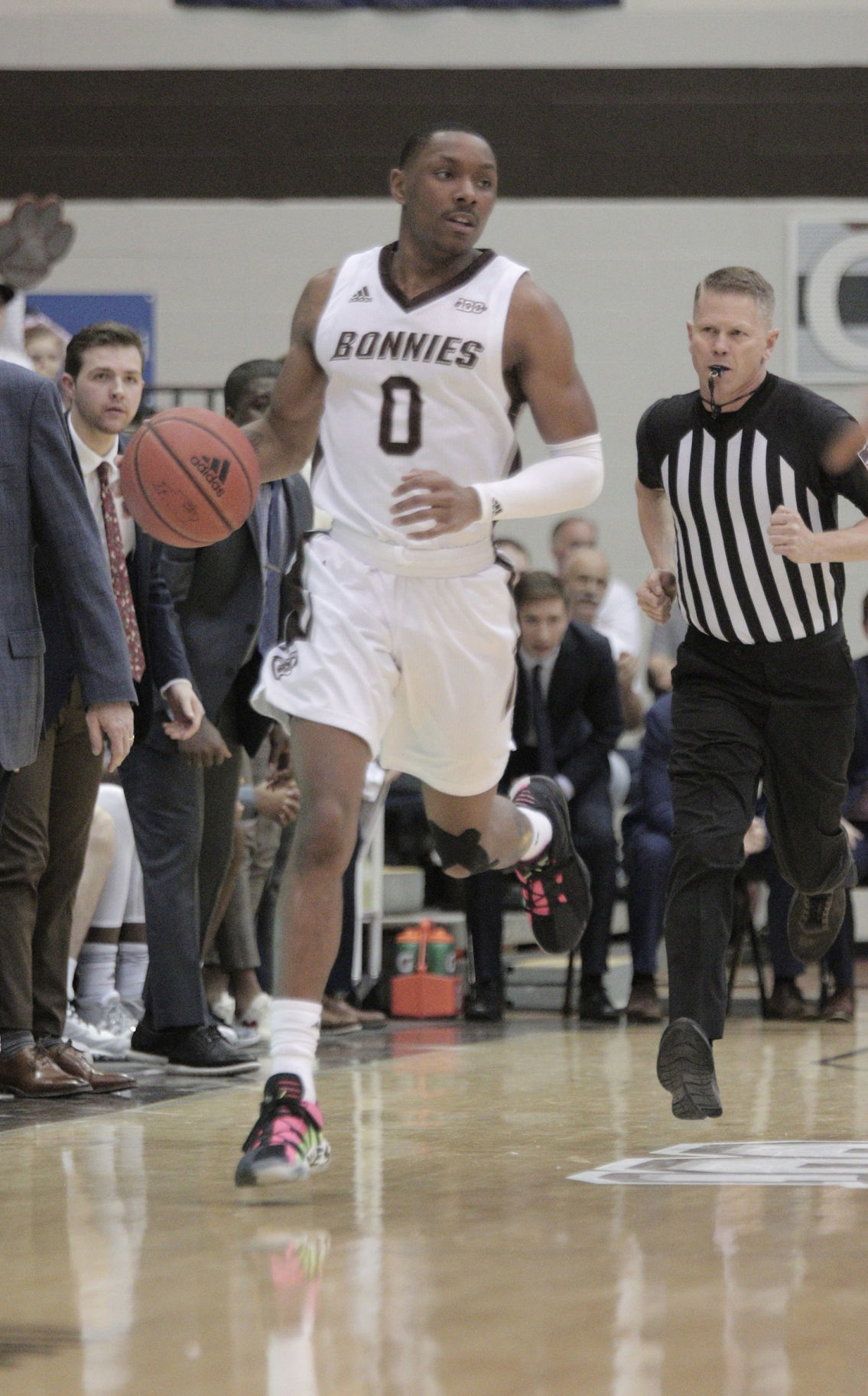 St. Bonaventure’s Kyle Lofton (0) brings the ball up the court against Davidson in an Atlantic 10 Conference men’s basketball game Friday at the Reilly Center. 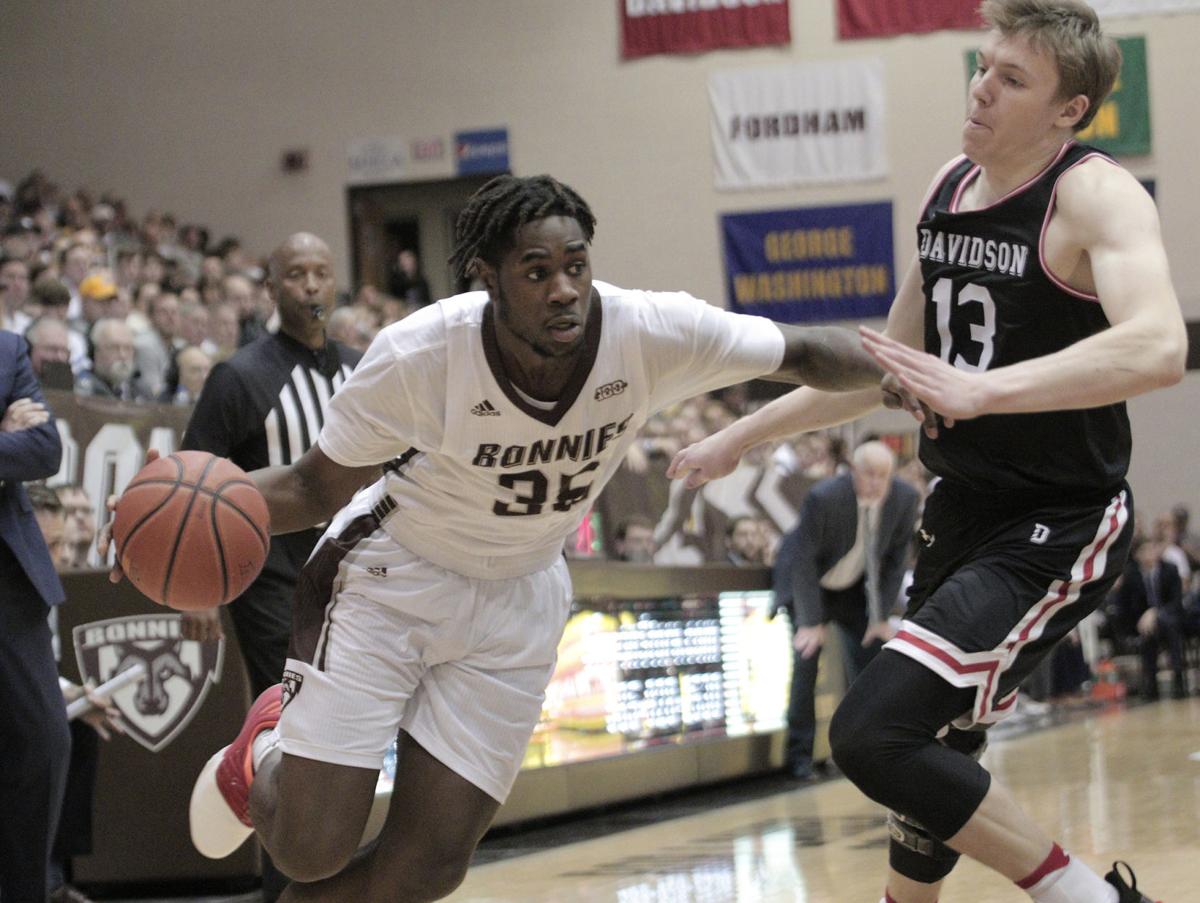 St. Bonaventure’s Justin Winston (35) drives to the basket against Davidson in an Atlantic 10 Conference men’s basketball game Friday at the Reilly Center. 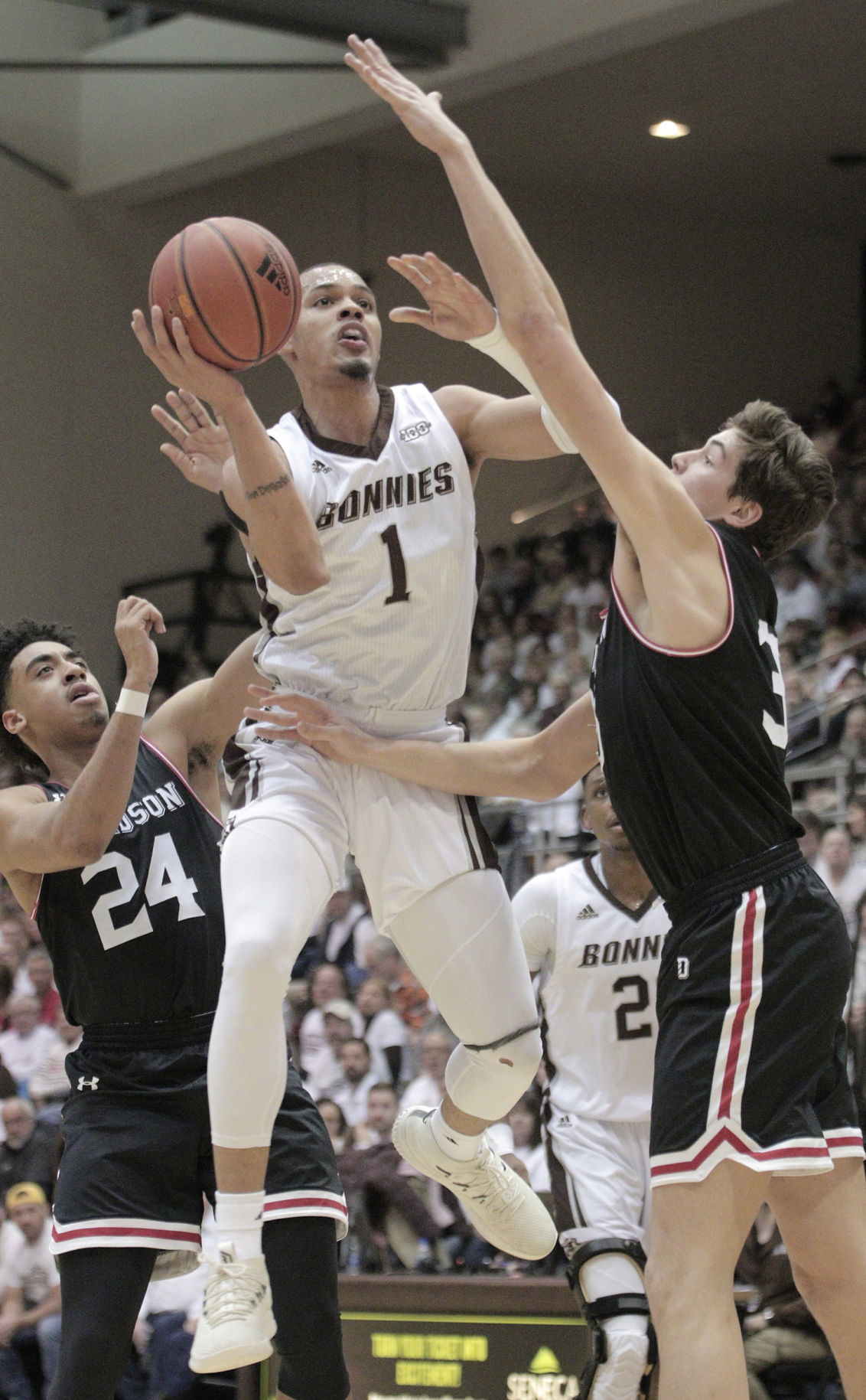 St. Bonaventure’s Dominick Welch (1) fights through for the off balance shot against Davidson in an Atlantic 10 Conference men’s basketball game Friday at the Reilly Center. 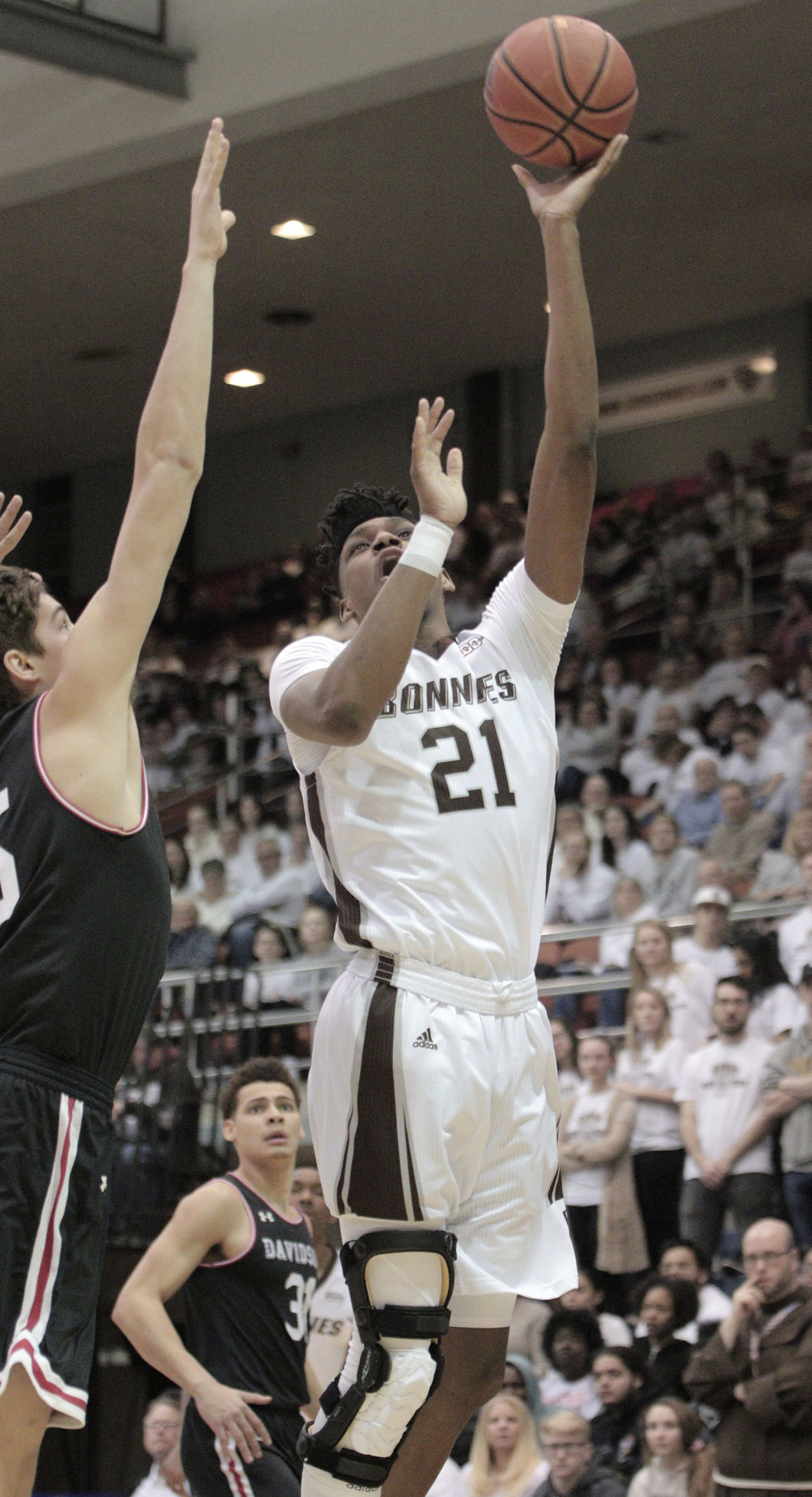 St. Bonaventure’s Osun Osunniyi (21) puts up a jumper against Davidson in an Atlantic 10 Conference men’s basketball game Friday at the Reilly Center.

St. Bonaventure’s Kyle Lofton (0) brings the ball up the court against Davidson in an Atlantic 10 Conference men’s basketball game Friday at the Reilly Center.

St. Bonaventure’s Justin Winston (35) drives to the basket against Davidson in an Atlantic 10 Conference men’s basketball game Friday at the Reilly Center.

St. Bonaventure’s Dominick Welch (1) fights through for the off balance shot against Davidson in an Atlantic 10 Conference men’s basketball game Friday at the Reilly Center.

St. Bonaventure’s Osun Osunniyi (21) puts up a jumper against Davidson in an Atlantic 10 Conference men’s basketball game Friday at the Reilly Center.

ST. BONAVENTURE — Kellan Grady threw up an off-balance, desperation 3-pointer at the shot clock buzzer that rolled around the rim and somehow went down.

That shot, which pushed the Davidson lead to 27, was essentially the exclamation point on a missive that all 5,237 observers among this White Out audience and anyone watching on ESPN2 had already known: this was the Wildcats’ night.

Davidson, the smooth and skilled opponent whose offense is poetry in motion when executed properly, and which had been a nightmare from the perimeter against St. Bonaventure in the past, was all of those things on Friday night.

The Bonnies, very quickly, could do little to stop it.

The result was Bona’s most embarrassing — and perhaps most surprising — setback of the season, a 93-64 drubbing at the hands of the Wildcats and a screeching half to its five-game win streak before a stunned crowd in the Atlantic 10’s marquee weekend matchup.

“ALL THE credit goes to Davidson,” coach Mark Schmidt allowed afterward. “They outplayed us tonight from the beginning to the end. When they shoot the ball the way they did tonight, they’re hard to deal with. They’re a very skilled team — more skilled than us — and in order to compete with them, you have to out-tough them …

“And they out-skilled us and out-toughed us.”

In their best performance of the season — and finally resembling the team most pundits expected when they were chosen to finish No. 2 in the league’s preseason poll — the Wildcats (13-11, 7-5) not only again burnt Bona from the perimeter, but shredded one of the A-10’s best defenses in every facet, shooting 56 percent, draining 13 treys and placing five players in double figures.

It was a furious run midway through the first half, however, that changed the course of the game entirely.

Trailing 16-13, Davidson ripped off a 20-2 stretch, which included three treys, a couple of backdoor buckets and a few nifty moves inside from Luka Brajkovic (13 points) and Nelson Boachie-Yiadom (11 points, 10 rebounds), to make it 33-18 with 7:40 remaining.

IN THIS current run of success, the Bonnies (17-9, 9-4) have gone through rough patches due to injury and youth, taken a few on the chin and even suffered back-to-back 25-plus-point losses less than a month ago.

But by late in the first half in this one, they looked as defeated as they’ve been in a while, perhaps since the last time they fell by at least 29 — in last season 85-55 home loss to VCU, which came almost a year to the day.

And a hyped-up RC crowd, which had been salivating for this national television opportunity against a big-name opponent, and this chance to further separate itself in its quest for a “double bye,” was left virtually silent.

“They took it to us,” Schmidt acknowledged. “We had some opportunities, we missed some stuff, then they got on a run and some of our guys were trying to make eight-point plays and became a little frustrated. Not in terms of selfishness, but just trying to do too much. But give Davidson credit — they played really, really well, and hats off to them.”

THE WILDCATS, led by usual suspects Kellan Grady (16 points) and Jon Axel Gudmundsson (14 points), but who received plenty of additional help on Friday, took a 19-point lead into the break and pushed it to as many as 31 late in the second half in this most sound beating Bona has taken in a year.

The Bonnies missed out on tying the program record for best 13-game record in conference play, set by the 1982-83 team. They dropped from third to fourth place in the league standings, behind idle Richmond (8-3), but still hold a one-game lead over VCU and Duquesne for the coveted No. 4 spot.

This was the first time all season that Bona lost a game in which sophomore center Osun Osunniyi played at least 18 minutes.

Schmidt’s team wasn’t only the victim of Davidson’s best offensive showing of the season, it was beaten at its own game, losing the rebounding battle by a massive 41-25 margin and being outscored in the paint, 38-32.

“They’re a good rebounding team, but they’re not a team that should outrebound us by 16,” the 13th-year coach said. “They shot the ball, they got us down, and it was hard to recover. They kept running their offense, we kept on missing shots. They shoot 56 percent, we shoot 41 percent. That’s the game.”

KYLE Lofton tallied a team-best 15 points while Justin Winston and Osunniyi added 12 and 11, respectively, for the Bonnies, who have dropped four-straight and seven of the last eight to Davidson. Dominick Welch and Jaren English were limited to nine points each on a combined 5-of-17 shooting.

He said that Bona won’t “burn the gamefilm” from this one, but rather use it as a learning tool ahead of its week-long layoff before meeting Richmond next Saturday.

“You watch it with the team,” he said. “You correct your mistakes and you go on to the next one, just like we always do, win or lose.”

The message to his team after it was outplayed and out-executed by Davidson on its home floor?

“We’ve got to bounce back.”