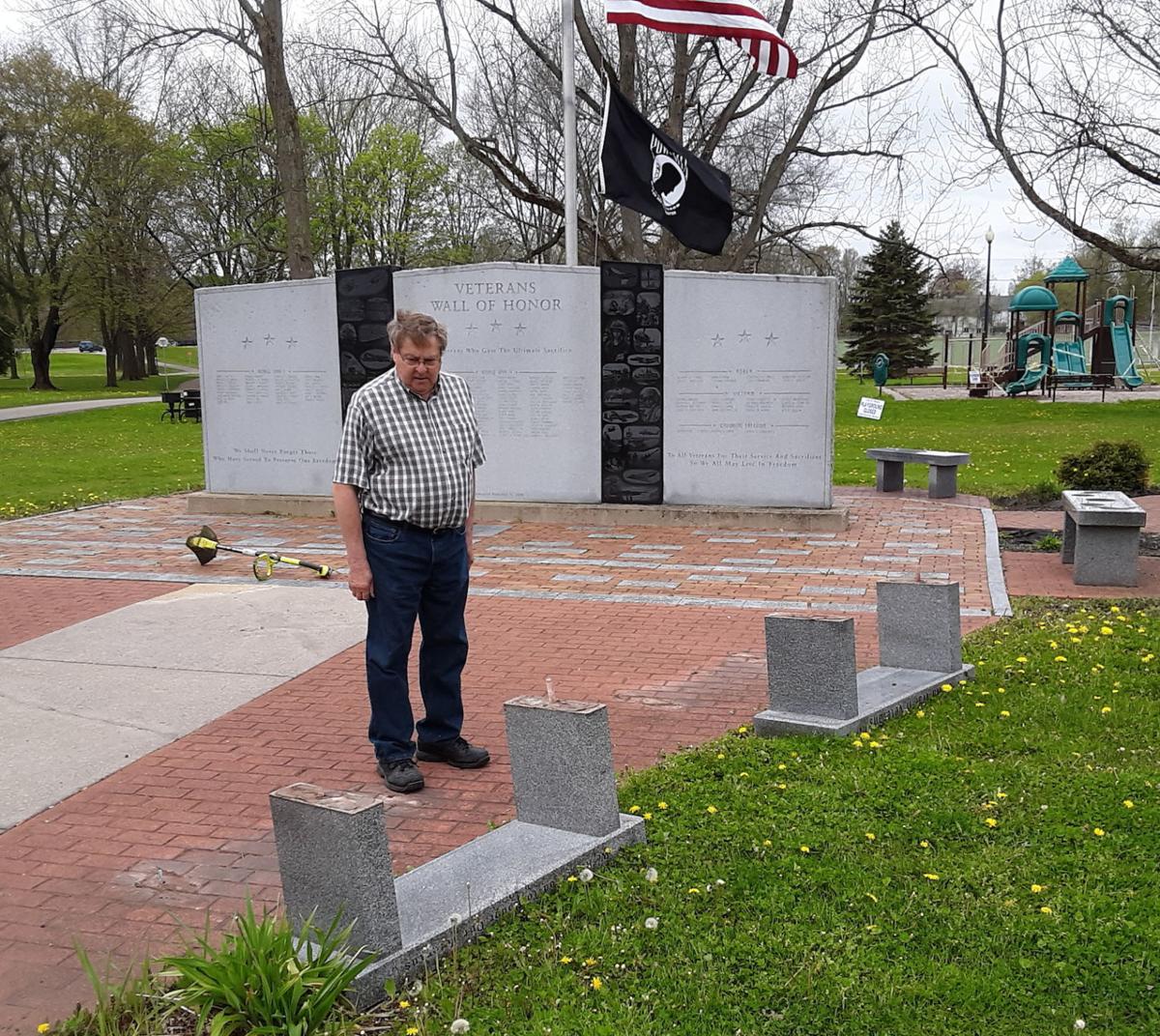 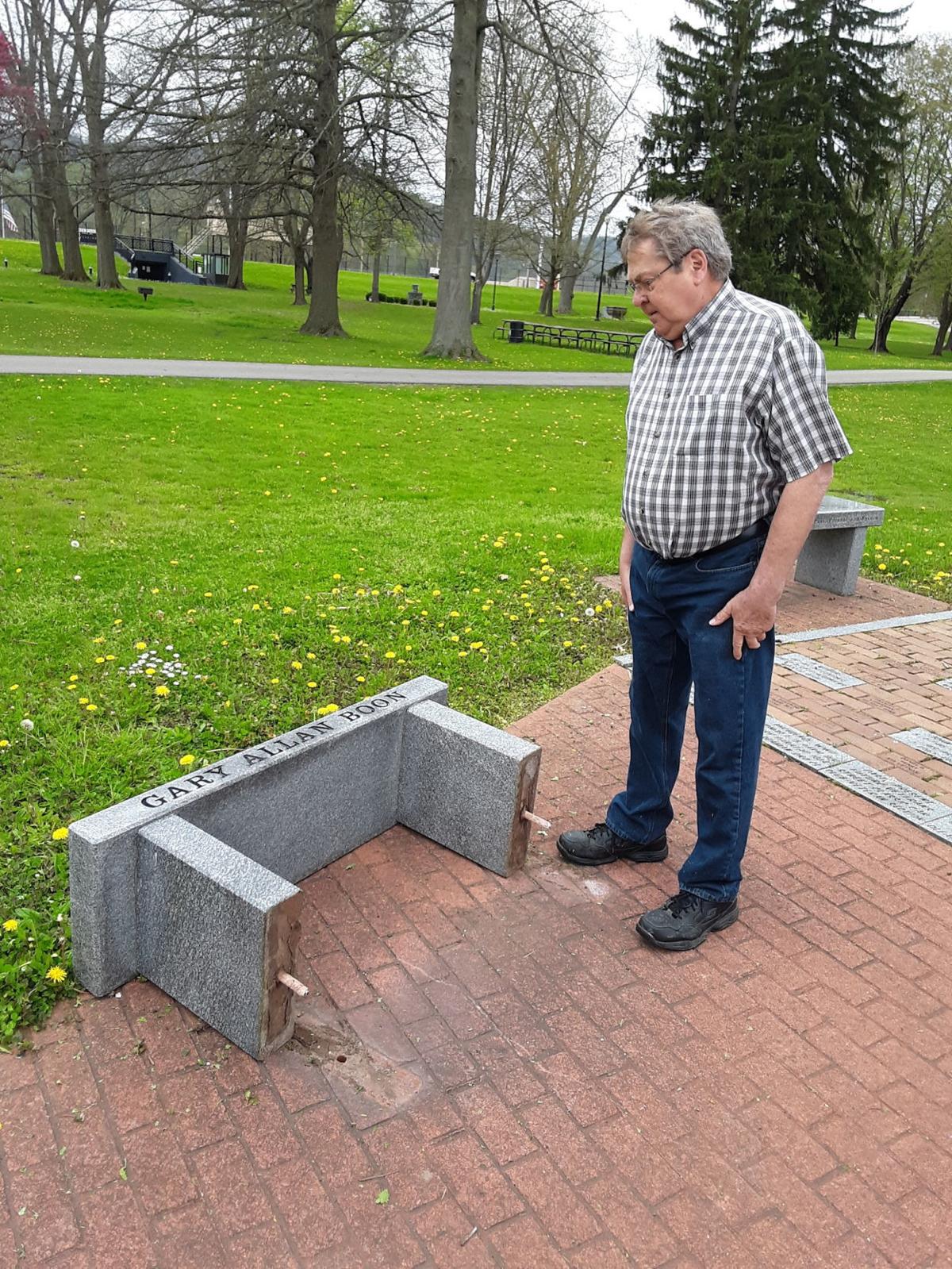 Bill Moore looks at an overturned stone bench at Olean’s Veterans Wall of Honor on Monday in War Veterans Park. 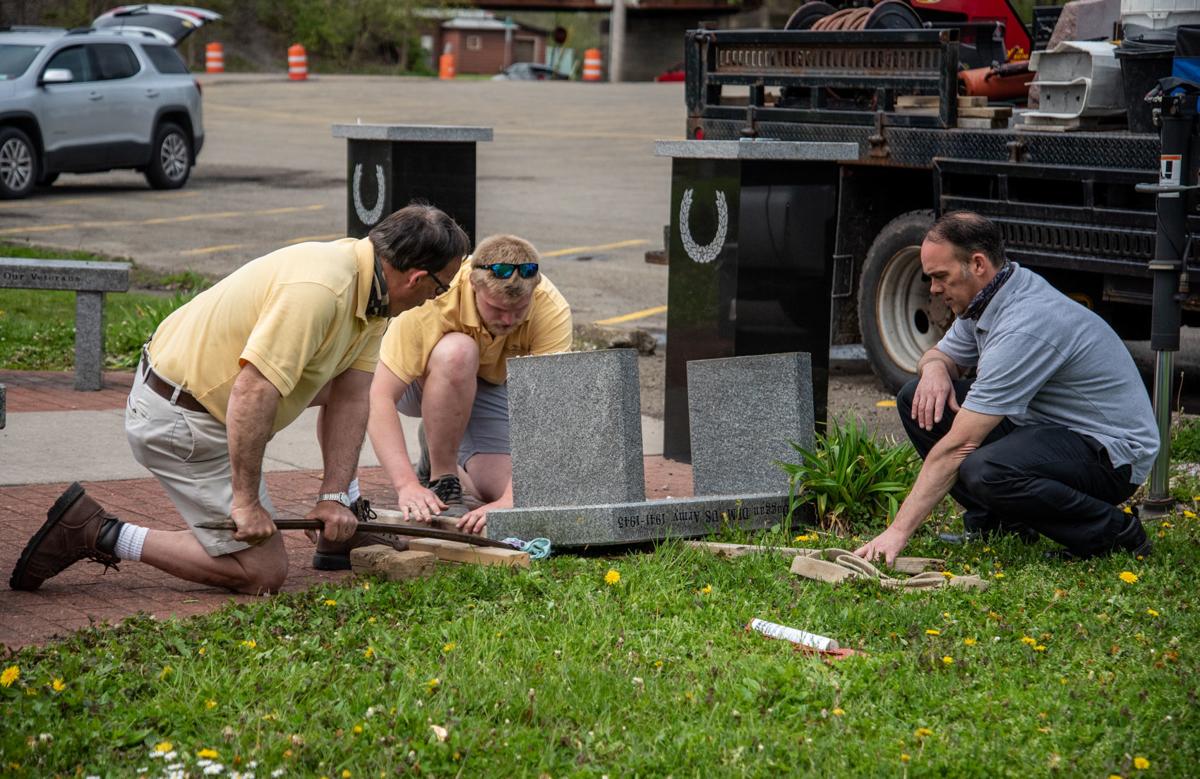 A crew from Crandall’s Memorials lifts one of the fallen stone benches at the memorial at War Vet’s Park in Olean on Monday.

Bill Moore looks at an overturned stone bench at Olean’s Veterans Wall of Honor on Monday in War Veterans Park.

A crew from Crandall’s Memorials lifts one of the fallen stone benches at the memorial at War Vet’s Park in Olean on Monday.

OLEAN — Bill Moore, the caretaker of the Veterans Wall of Honor in War Veterans Park, was stunned by what he found at the site on Sunday.

Four of the large stone benches at the memorial were dislodged and overturned by vandals.

“It’s the kind of thing that you really wouldn’t expect to see a week from Memorial Day,” said Moore, a U.S. Army veteran who served during the Vietnam War.

Moore was a member of the committee that worked to have the Veterans Wall of Honor placed in the park. The effort was led by the late Ann Padlo.

The Wall of Honor carries the names of 160 of Olean’s war dead from World War I to Vietnam.

“It really makes you ask why they would do anything like this,” said Moore, noting he is the only living member of the Wall of Honor committee who still takes care of the site. “It just isn’t right.”

He was weed-trimming the site Monday when he contacted the Times Herald about the vandalism. He notified the Olean City Police Department on Sunday and an officer came by to assess the damage.

No one from the police department with authority to discuss the investigation of the incident could be reached for comment Monday.

Moore pointed out that it took real effort for the vandals to dislodge the stone legs of the benches from metal pegs set into concrete — and then tip the benches over. He said each bench weighs close to 200 pounds.

Workers for Crandall’s Memorials, which carved the monument and stone benches for the site, were on hand Monday to put the benches back in place.

Owner Curt Crandall noted that actual damage to the heavy benches was minimal. His team was able to reset the benches without much difficulty.

“We gave them a quick scrub to get off the grass stains, and they’re good to go,” he said.

It’s not the first time Crandall’s was called back to the site to undo vandalism.

On Dec. 9, 2006, an Olean man, 25 at the time, used black spray paint to deface the memorial with graffiti — less than a month after it had been dedicated on Veterans Day of that year. The culprit, who had a previous felony conviction on his record, was sentenced in September 2007 to two to four years in prison and ordered to pay more than $3,600 in restitution for the vandalism.

Edward M. Sharkey, the Cattaraugus County district attorney at the time, said he didn’t believe the state prison sentence was out of line for what the defendant did. Sharkey told the Times Herald it wasn’t an average graffiti case.

“I heard from a lot of people about this case, which was unusual,” the DA said after the sentencing. “Many people were outraged by what he did and I’ve seen a lot of people stopping to look at that monument and reflect on it. The community was the victim here.”

Crandall’s called in experts from around the country to help get the paint out of the stone’s pores. The paint wasn’t completely eradicated but it faded after several chemical treatments — and now there is no visible evidence of the damage.