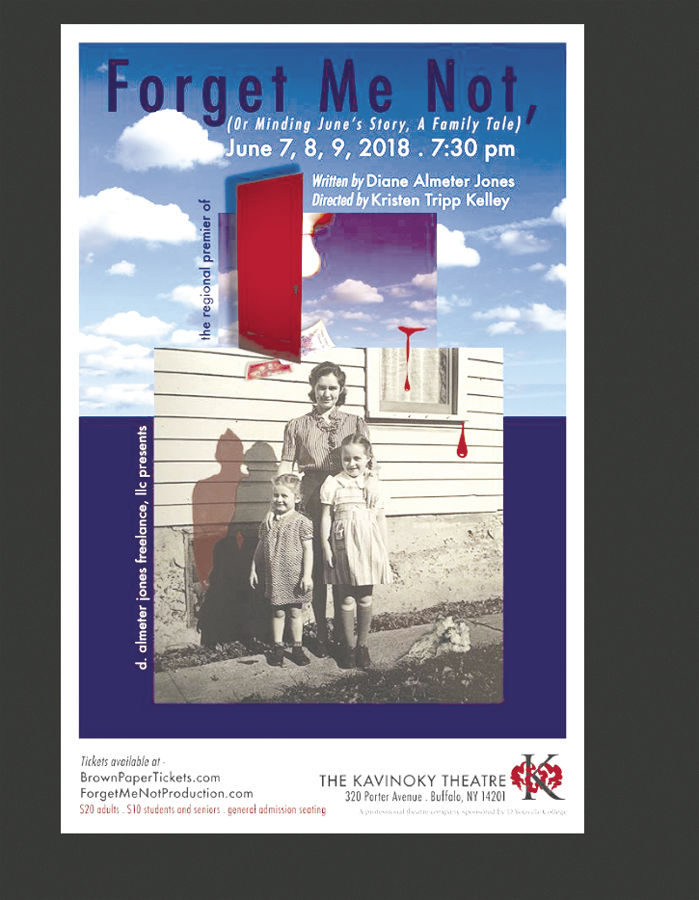 The flyer for ‘Forget Me Not,’ which premiered Friday at the Kavinoky Theatre in Buffalo.

The flyer for ‘Forget Me Not,’ which premiered Friday at the Kavinoky Theatre in Buffalo.

A play about a grieving World War II widow from Limestone got its debut performance last Friday, as “Forget Me Not” took to the stage at the Kavinoky Theater in Buffalo.

The play, written by Diane Almeter Jones, made its premiere for a three-day run at the theater on the D'Youville College campus. Jones is the resident properties master and set dresser for the professional company based at the campus.

The story runs in an evening in the attic of a home in Limestone, Jones said, revolving over the loss of June Bickell’s husband, Pvt. First Class Leroy Harry Bickel.

Bickell, better known as Harry, was drafted into the service, reporting to Salamanca for his induction. In late 1944, he arrived in France serving in the 1st Infantry Division, "The Big Red One."

“He was only there a few months,” Jones said.

He was killed Jan. 28, 1945, at Herscheid, Belgium, just days after surviving the Battle of the Bulge. It’s believed that Bickell was the first Limestone resident killed in the war, according to newspaper archives of the time. In 1947, Bickell's body was returned to America, being laid to rest in McKean County Memorial Park outside of Bradford, Pa.

“Seventy-three years ago, on a blustery February day, my Grandma June received the telegram,” Jones said. “She put it in the pocket of her apron, walked upstairs and locked the attic door.”

The play’s genesis came during study in college a few years ago.

“I went back to Buffalo State,” she said, seeking a major in art and a minor in theater, and began as a theater class project.

“We were told to work on something we were passionate about,” Jones said, adding the inspiration was immediate. “I have an actual box of letters from June at my home, and I just went through them.”

Later, she sought to turn the assignment into a full-fledged play.

She's lived in the US for years. Now she faces a tough choice

iStar Appoints Anita Sands to Join Board of Directors

“Buff State let me come back and workshop it,” she added, and with much work done it was time to bring it to the Kavinoky. “They allowed us to put it on after the regular theater season ended.”

The letters played a part in the surreal, sometimes-absurdist dreamscape play, with portions read in character by the four actors on stage -- June, Harry, Harry’s brother Francis, and Diane – as did an ongoing pinochle game around the old enamel-topped family table.

“The table is the cornerstone,” she said, noting the table is from her grandmother’s home and has been in every workshop and presentation of the play to date.

In fact, much of the set was decorated with items that once belonged to the young couple. From military uniforms to chairs, from photos to the old record player, the home in Limestone was brought alive on the stage.

Alive enough that Jones felt more connected to her family when she finally saw it in rehearsals.

“I sat and watched it — and I got to have a conversation with my grandparents, and I got to meet a man I never met,” she said.

Along with just a story of a husband and wife, it’s also a story of the war from a personal perspective.

“This play is very much of the women’s point of view of World War II,” she said, also noting that between rationing and awaiting doom-bearing telegrams, the women left at home were also fighting. “Now, we’re able to separate ourselves from (war). I think it’s harder on our military families.”

As a framing device, she used her own experiences in the home — including when she locked herself in the same attic when she learned of June’s death in the 1980s.

“This helped me deal with my own issues, which is why it begins in 1983,” Jones said.