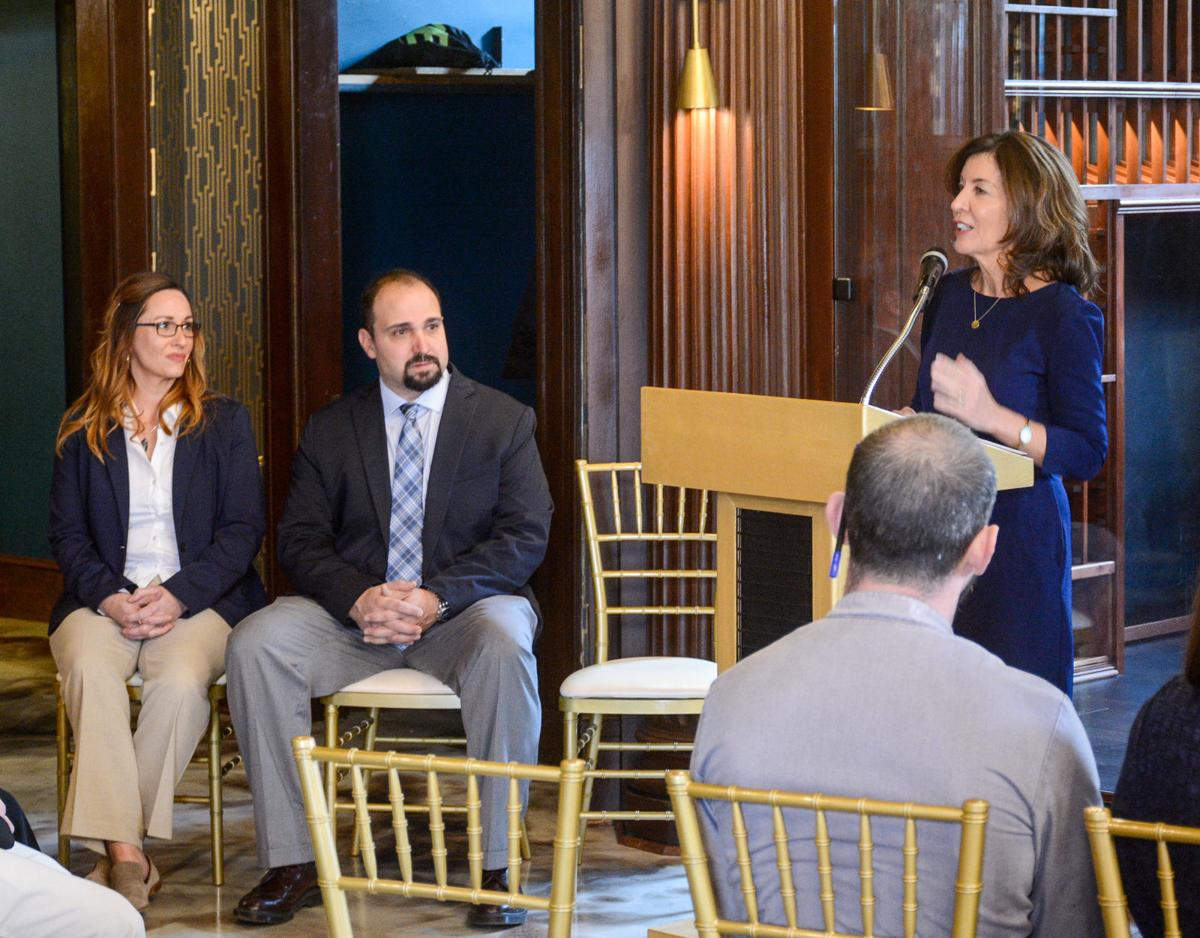 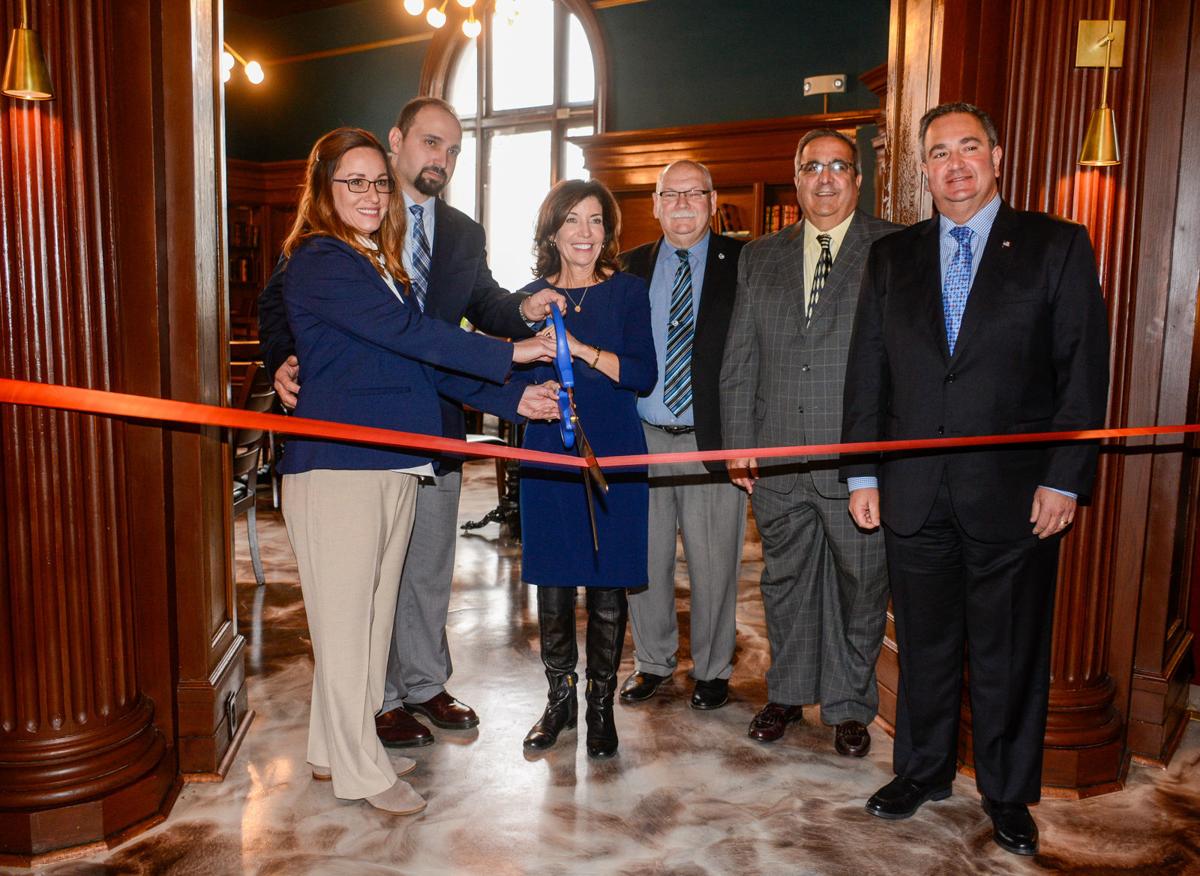 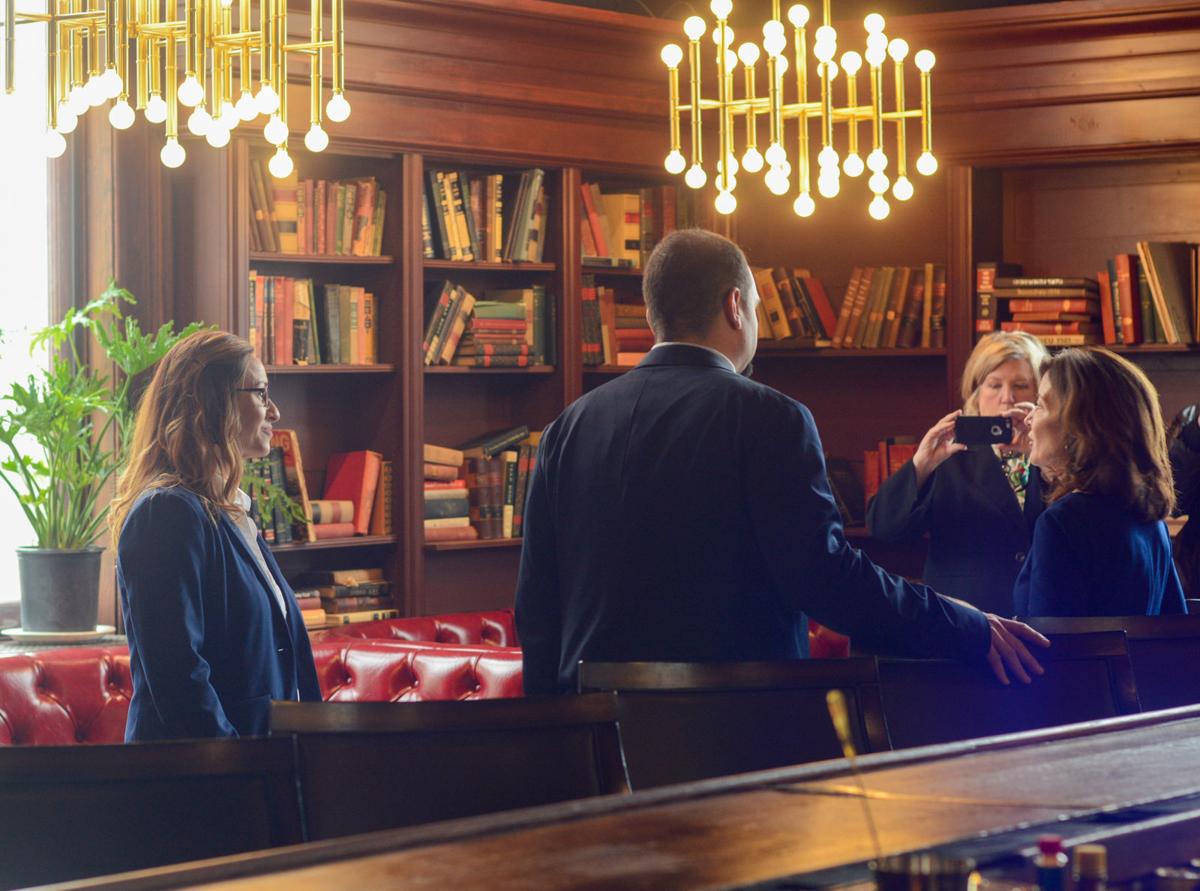 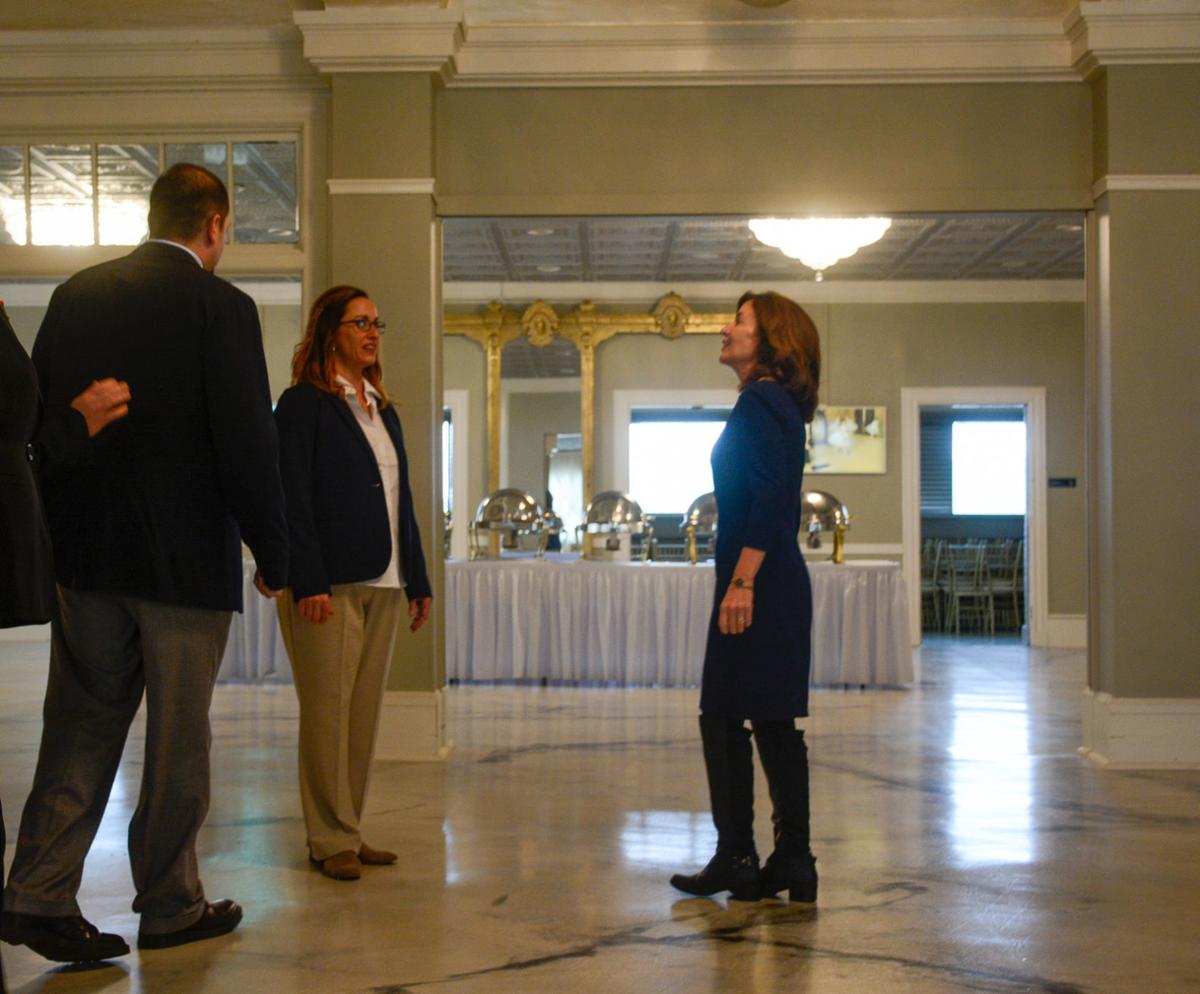 Owners Dan and Katie DeCerbo were joined by Lt. Gov. Kathy Hochul and other officials to cut the ribbon on a $1.5 million renovation of the historic Old Library Restaurant on South Union Street on Monday — the first project to wrap up under the city’s $10 million Downtown Revitalization Initiative award.

“We’re finally official,” Dan DeCerbo said. “It’s been a long six months — a lot of tiring days and it’s at the home stretch.”

First proposed in late 2017, major work began this spring, he said, thanks to $719,000 in funding from the Downtown Revitalization Initiative and financial services from KeyBank.

“Bringing a historically significant building back to life for the surrounding Olean area has been a pleasure,” he added. “We’re planning, tentatively, to open on the 13th — we kind of wanted a creepy day.”

The owners hope to be open for lunch and dinner Wednesday through Sunday each week, with a Sunday brunch also offered in the Old Library tradition.

Hochul, who came to Olean in September 2017 to announce the city would receive the DRI award, held the well-used, oversized scissors during the ribbon cutting.

“What (Dan) and Katie have accomplished here is astounding,” Hochul said, declaring the building to be “world-class” in terms of architecture and amenities. She added she hopes to set a reservation after the opening.

The main floor of the Old Library saw major renovations, changing colors and reconfiguring the space while also keeping the original woodwork in place. A new kitchen was also installed. The upper floor, once the children’s section, saw a shift from dark tones to white and beige — making for a brighter, cheerier and easier to photograph banquet hall. Up to 270 guests can attend events in the hall, Katie DeCerbo said.

Other elected officials, present for the ribbon cutting, were in awe of the progress at the restaurant.

Mayor Bill Aiello, who has made jokes about cashing the oversized $10 million check presented to him by Hochul more than two years ago, said “we are starting to cash that check.

“I’m so thankful you took up this project — it’s wonderful what you’re doing here.”

Having been a patron back when the Old Library was just the city’s library, the mayor said he feels the same as the many residents who have been peppering him with questions on the project for months.

“People are anxious to get here,” Aiello said.

“I’ve seen the transformation of this building — it’s been amazing,” said state Sen. George Borrello, R-Sunset Point, himself in the hospitality business.

“I just can’t tell you how impressed I am with what you’re doing here,” he said, adding the resolve to take on such a huge project is characteristic of area residents. “That’s who we are as a community, guys. This is what we do.”

The project is the first to cut the ribbon under the DRI, awarded to the city in 2017 and subject to a rigorous planning and vetting process through early 2018.

This is the role the Chief Justice plays in impeachment

Dershowitz: I'm like the kicker who can win the game

Hochul said the DRI, which provides $10 million for a community in each region of the state annually, is one of the platforms to help “fix Upstate after 40 years of neglect.

“These buildings that have stories to tell are going to be varnished, are going to be polished and brought back to their early glory,” she said, adding that by giving the city a DRI award in 2017, it was Gov. Andrew Cuomo’s way of saying, “we believe in you — now run with it.”

Along with saving historic structures, one of the core objectives of the DRI was direct or indirect job creation.

The Old Library project will create 65 permanent new jobs, Hochul said, including positions in the restaurant and the spa being put in the Victorian home next door, also by the DeCerbos.

The library was one of almost 1,700 built between 1883 and 1929 with funds from Andrew Carnegie, a Scottish immigrant who made his fortune in the steel mills of Pittsburgh. For almost 70 years, the building housed the Olean Public Library. But by the 1970s, space and accessibility concerns forced the library to move to the former Loblaws supermarket on North Second Street. After the library moved out, the building was rented to tenants including the Olean Historical Society and the Cattaraugus County Department of Aging. The last tenants left in 1979.

Restauranteur and business community pillar Louis “Louie” Marra purchased the building from the library in 1982 as demolition loomed, eventually investing more than $1 million into renovation and addition before opening the Old Library Restaurant.

In 1988, the family purchased what is now the Old Library Inn, converting it into the city’s first bed and breakfast.

Marra died in 1990 from a heart attack while bicycling, and the family continued what he started. However, the family closed the restaurant side of the business in 2012, focusing on catering and special events.

OLEAN — With the ribbon cut on the first Downtown Revitalization Initiative project Monday, …