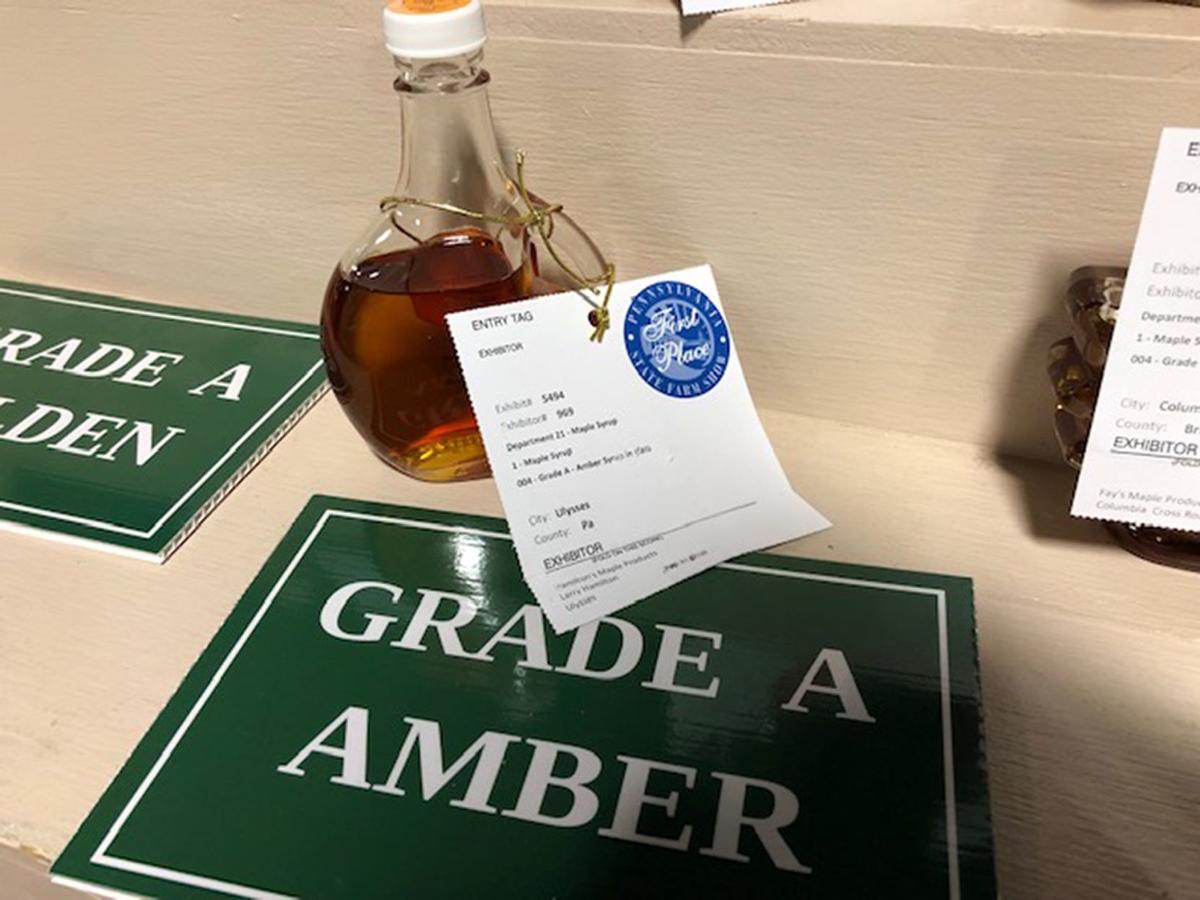 In addition to Premier Exhibitor and Best Syrup of Show, Hamilton’s Pure Maple Products took home several other awards, including first-place for its Grade A amber maple syrup. 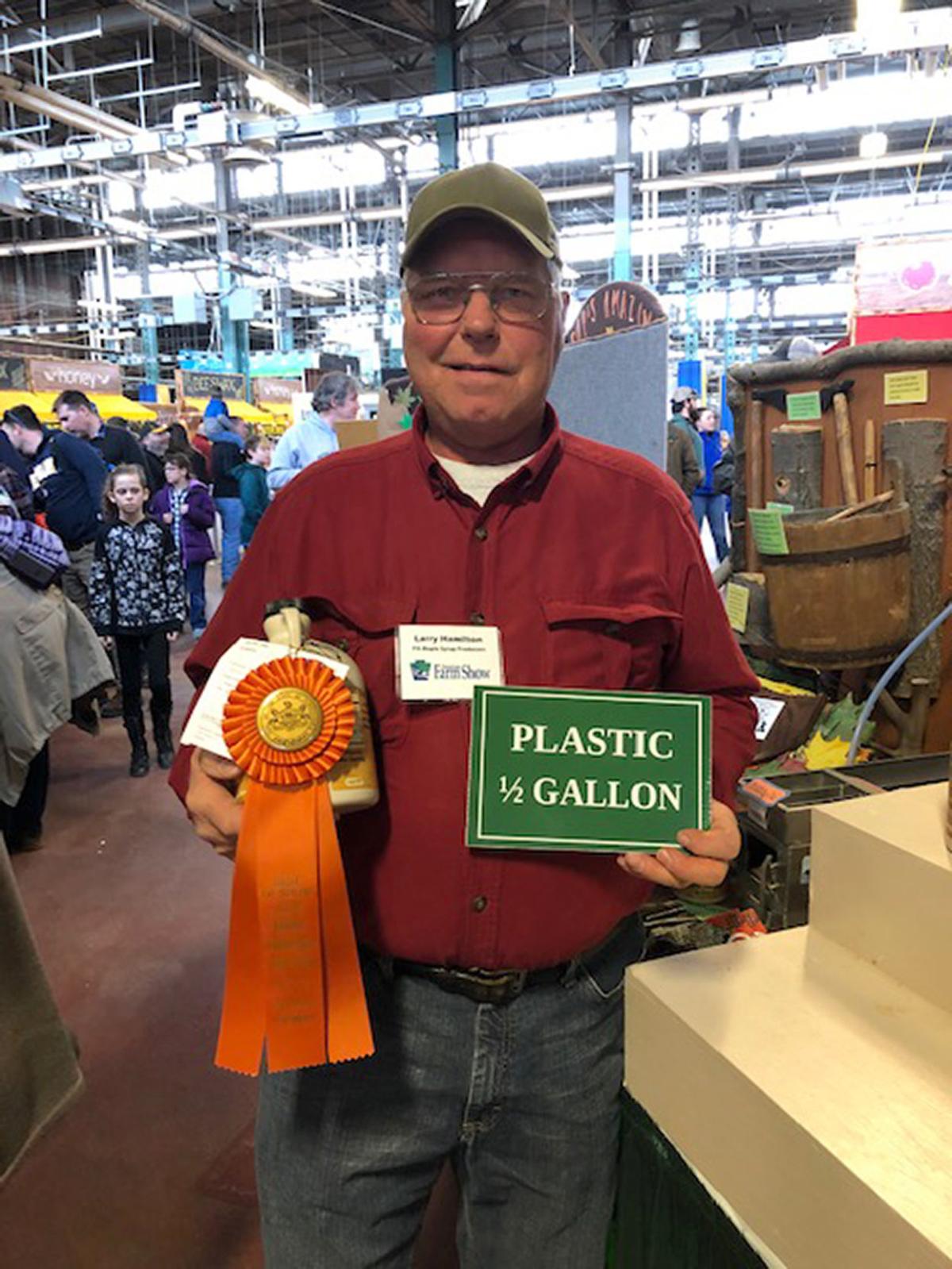 Larry Hamilton, who runs Hamilton’s Pure Maple Products in Ulysses, Pa., with wife, Phyllis, was honored as Premier Exhibitor and Best Syrup of Show at the Pennsylvania Farm Show in Harrisburg.

In addition to Premier Exhibitor and Best Syrup of Show, Hamilton’s Pure Maple Products took home several other awards, including first-place for its Grade A amber maple syrup.

Larry Hamilton, who runs Hamilton’s Pure Maple Products in Ulysses, Pa., with wife, Phyllis, was honored as Premier Exhibitor and Best Syrup of Show at the Pennsylvania Farm Show in Harrisburg.

ULYSSES, Pa. — Here’s one winter experience that’s hard to beat: Eating a pile of warm pancakes smothered in butter and topped with locally made maple syrup.

Locals don’t have to go far for the best syrup in Pennsylvania, at least according to the judges for the 2020 Pennsylvania Farm Show: Hamilton’s Pure Maple Products in Ulysses, Potter County, took both Best of Show and Premier Exhibitor honors in the maple syrup competition at this year’s show.

Larry Hamilton, who runs the business with his wife, Phyllis, said they have been competing at the Farm Show for around 30 years, and have taken home many prizes during that time.

Best of Show, he explained, is “the best syrup that the judge feels of anything that was entered.”

He explained, “There are 19 total categories of maple product in the competition, with each class carrying its own placing along with a point value attached to each placing.”

The point value takes into consideration elements such as density, flavor, color, packaging and grade. As the title of Premier Exhibitor is based on the total points for all 19 classes, competitors are not able to get enough points to win if they only enter four or five classes, he noted. This promotes participation.

“We’ve been competing at the Farm Show almost 30 years,” said Hamilton. “This is the coveted honor to be able to bring home and put on our sugar house wall.”

Hamilton talked about the history of their business, too.

“We’re located just outside of Ulysses, Pennsylvania,” he said. “We live on a section of the family farm.”

Not only have Larry and Phyllis Hamilton been making syrup for decades, but they are carrying out a tradition of his family that has lasted generations.

She was lonely from social distancing. Then inspiration struck

His family settled on the farm in 1872, and the main part became a Century Farm in 1972. Hamilton’s twin brother lives on a parcel there, too.

Larry and Phyllis Hamilton married in 1976. That same year, Larry Hamilton decided to start his own construction company. After they started the business, the couple realized they needed something to do in January and February to bring in money.

“My wife and I were both raised on dairy farms that made maple syrup. We decided to give that a try to see if we could use it as supplemental income,” he said.

Hamilton said they borrowed 500 buckets from his uncle and got permission from his dad to go into the sugar bush. That first year was full of learning experience, with the couple ending up with a burnt pan or two, but they successfully made some syrup that year.

“We were hooked then,” he said.

In 1989, they built a sugar house on the side of the construction shop with new equipment, which was “much handier than the old shack in the woods.” The operation has been growing ever since.

Now that their children are out of the house, they have purchased more efficient equipment such as a new evaporator and a reverse osmosis machine so the couple can handle the business more easily by themselves.

About nine years ago, the Hamiltons started a pancake house, too.

From 8 a.m. to 2 p.m. on Saturdays and Sundays during the fall and spring, residents can come to Hamilton’s Pancake House to enjoy hotcakes with their famous syrup. The pancake house is typically open between Thanksgiving weekend and Easter weekend. They take a break through January, but the pancake house will reopen Feb. 1.

During the production season and through March, the Hamiltons will offer tours and tastings at the sugar house. They are located at 320 Gee Hill Road, Ulysses.

Learn more about their business at www.puremapleproducts.com, or contact them at (814) 848-9853 or hamiltonsmaplefarms@gmail.com.