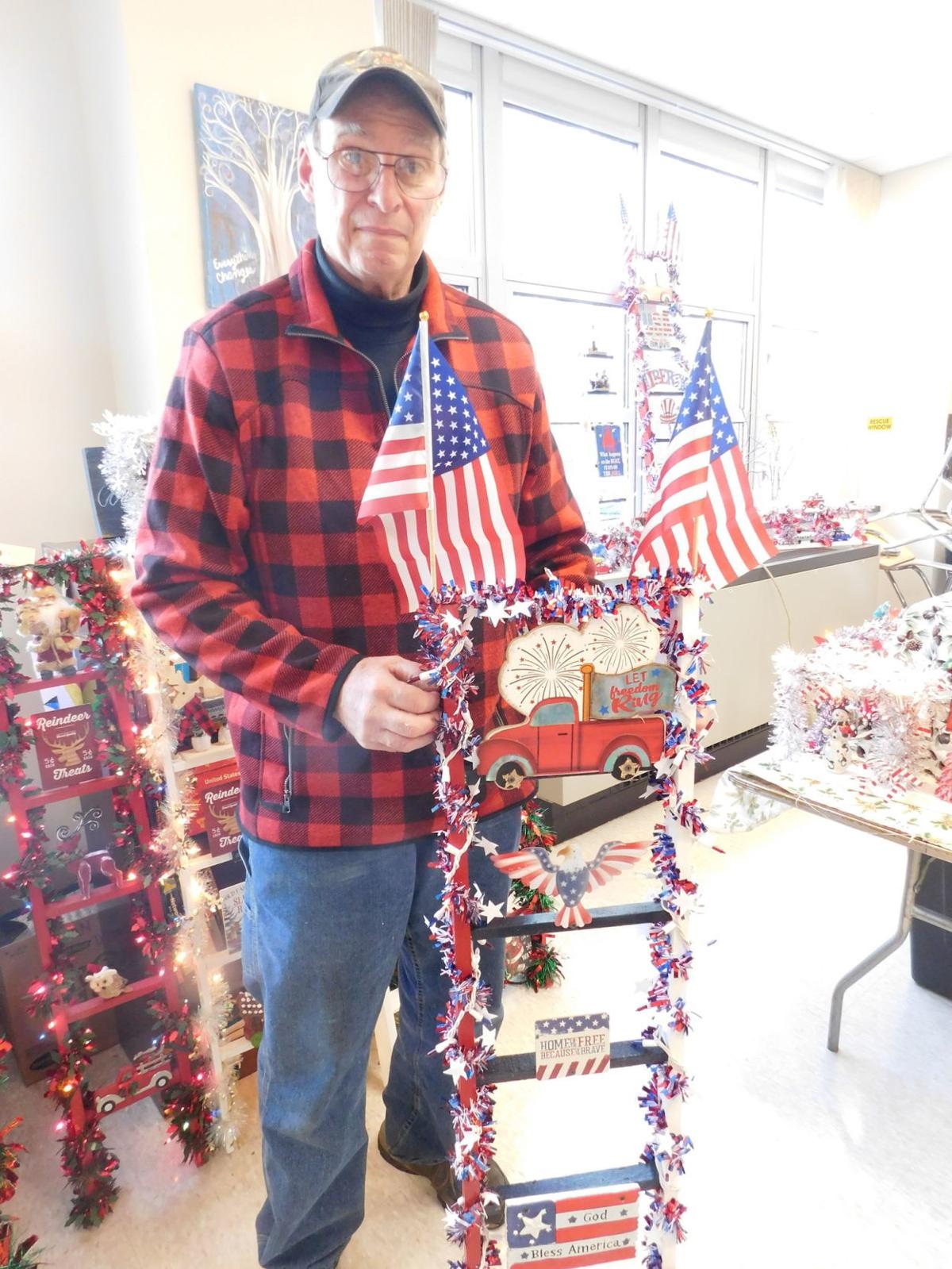 Vietnam veteran Richard Kolbe helps others celebrate the seasons with his woodcrafts, as displayed at the recent Portville Arts, Crafts and Antique Show. 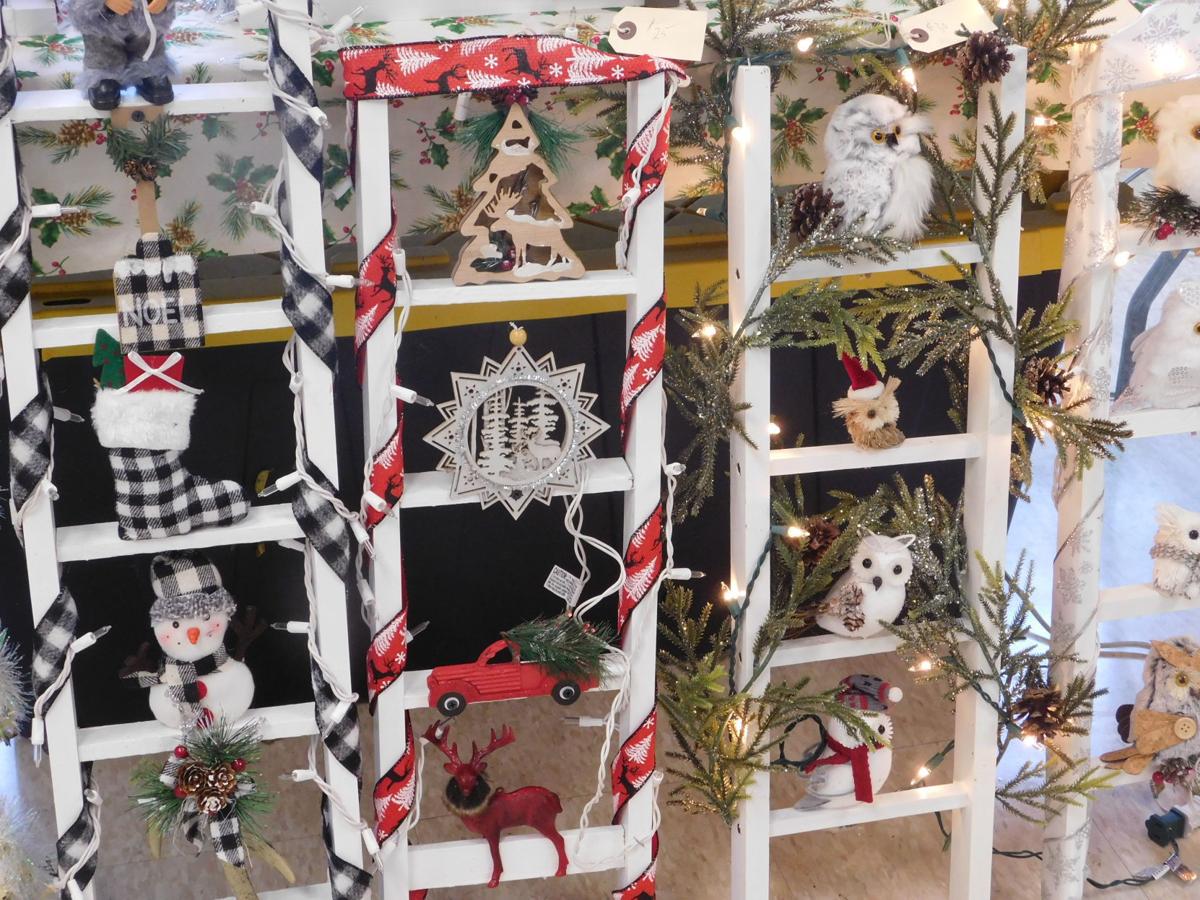 Richard Kolbe keeps an eye on trends and store displays to get ideas for his seasonal woodcrafts.

Vietnam veteran Richard Kolbe helps others celebrate the seasons with his woodcrafts, as displayed at the recent Portville Arts, Crafts and Antique Show.

Richard Kolbe keeps an eye on trends and store displays to get ideas for his seasonal woodcrafts.

PORTVILLE — Talented artists and craftspeople from near and far can often be found at Portville’s annual Arts, Craft and Antique Show the first weekend in November.

Richard Kolbe lives in Henderson, near Watertown, but has local ties. The grandfather occasionally visits his daughter, Katelyn Smith, and her family in Portville. Last year he was encouraged to bring some woodcrafts from his KSU Productions business to the local event.

“It was wonderful, so I thought I should try it again,” Kolbe said, standing amid a whirl of color and lights in a school classroom. He creates painted ladders in a variety of decorative styles, typically those that celebrate the fall through Christmas seasons and include Halloween and Thanksgiving. He also has a patriotic line of his offerings.

Kolbe, who wears a US Navy cap, said he was a professional photographer and videographer by trade and has always been somewhat creative.

“I used to cover the equestrian circuit,” he said. “If you’ve ever seen those big cameras behind in the field, that’s what I did. I owned my own business in Syracuse for quite a while.”

Currently, he works at a full-time job at Home Depot making it pretty convenient to find some of the material used for his crafting hobby.

“I just do this part-time,” he said, noting he is especially active on the craft show circuit in the fall, attending shows in Syracuse, Watertown and the surrounding areas.

“It started out as a father/daughter building and bonding project when Katelyn was 11 years old,” he said. He was visiting the New York State Fair when he saw some Christmas displays.

“They had these little red ladder Christmas trees with elf dolls atop them,” he said. “I asked how much they cost and was told the ladders, which I was interested in, weren’t for sale, only the elves.” Kolbe proceeded to have a conversation with the vendor, asking how hard it was to make the ladders and where materials might be found.

“I couldn’t find them where they said, but went looking on my own,” Kolbe said. Pretty soon, he and his daughter were sharing ideas to create different themes for the ladders, which he cuts, primes and paints before getting to the decorative part of the process.

With his daughter all grown and having given him and his wife, Barbara, grandchildren, Kolbe said he kept the hobby going since he enjoyed it. He doesn’t use craft books but primarily gets his ideas from what he sees in stores, often modifying to suit his vision. Through the process, he discovered something else.

“It’s kind of therapeutic,” said the Vietnam veteran who served in 1972. He belongs to the Vietnam Veterans Association in Watertown and Syracuse, where he used to live.

“We’ve taken various excursions together and have discussed our hobbies,” Kolbe said, noting that keeping their hands busy can be therapy for many veterans who have seen and done hard things, especially those who, sadly, came home during such a tumultuous time, rarely to welcoming crowds.

“We had a saying in Vietnam—all you have to do is get out of here and go home and the rest of your life is gravy,” he said, touching on a memory of his own. Each year he invites fellow vets to his home on Lake Ontario for a picnic where they can share experiences and enjoy a nice day together.

Kolbe has personally survived several bouts of cancer he traces back to exposure to Agent Orange during the war. His wife works in a health food store and he said she works hard at trying to keep him healthy. Continuing his hobby has also assisted in keeping his mind and hands occupied.

KSU Productions displays, which Kolbe said are quite popular, filled the back of a classroom. He once had a van but now stows his wares in a pickup truck. He stores them in a boathouse on his property when it’s not show season. He uses bright colors, such as oranges and browns for Halloween and Harvest displays and reds, greens, gold and silver for Christmas. He always has a few red, white and blue items on hand as well.

“I just capture things I like, things that work for me,” he said, noting others seem to like them, too. “It’s also rewarding to be able to make people smile.”