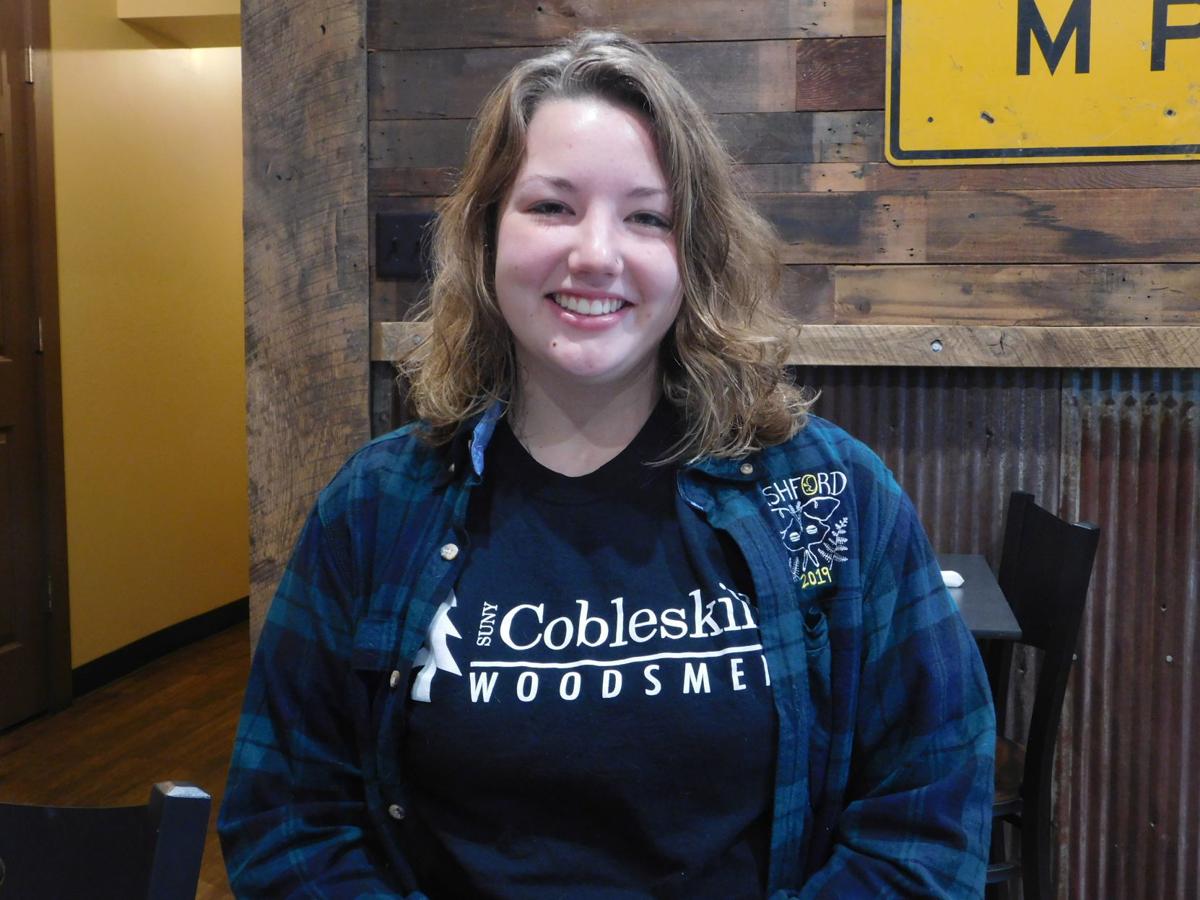 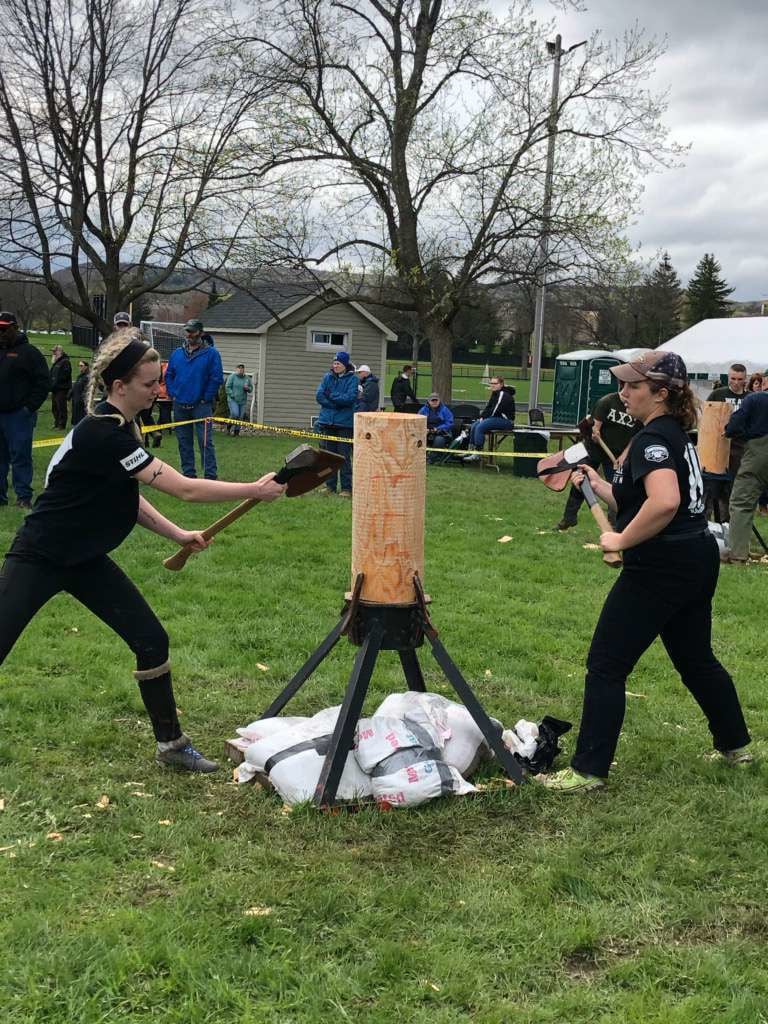 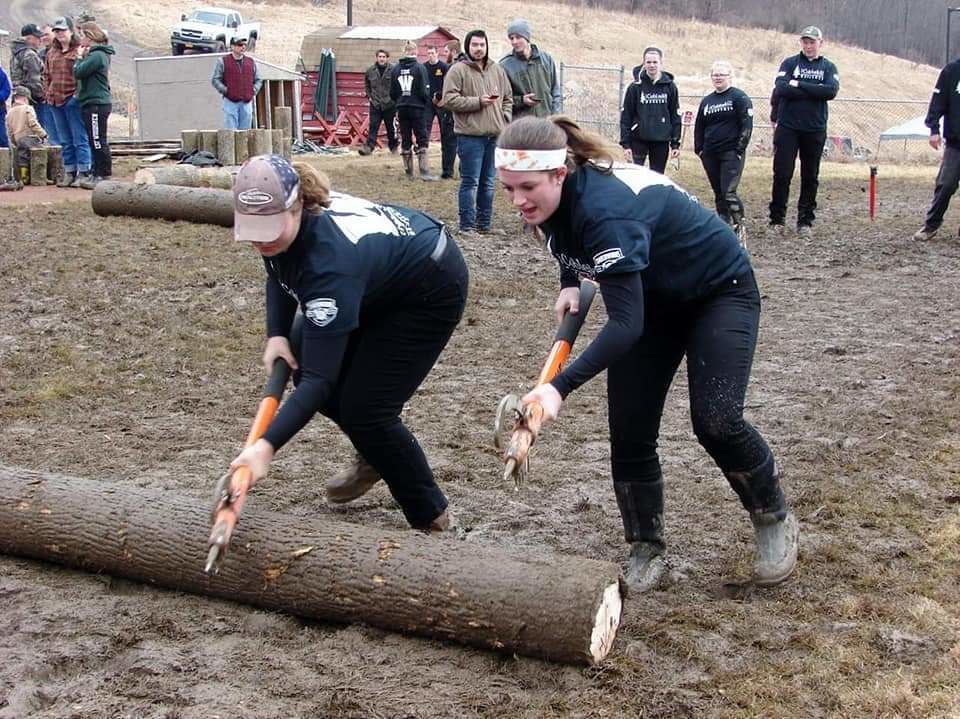 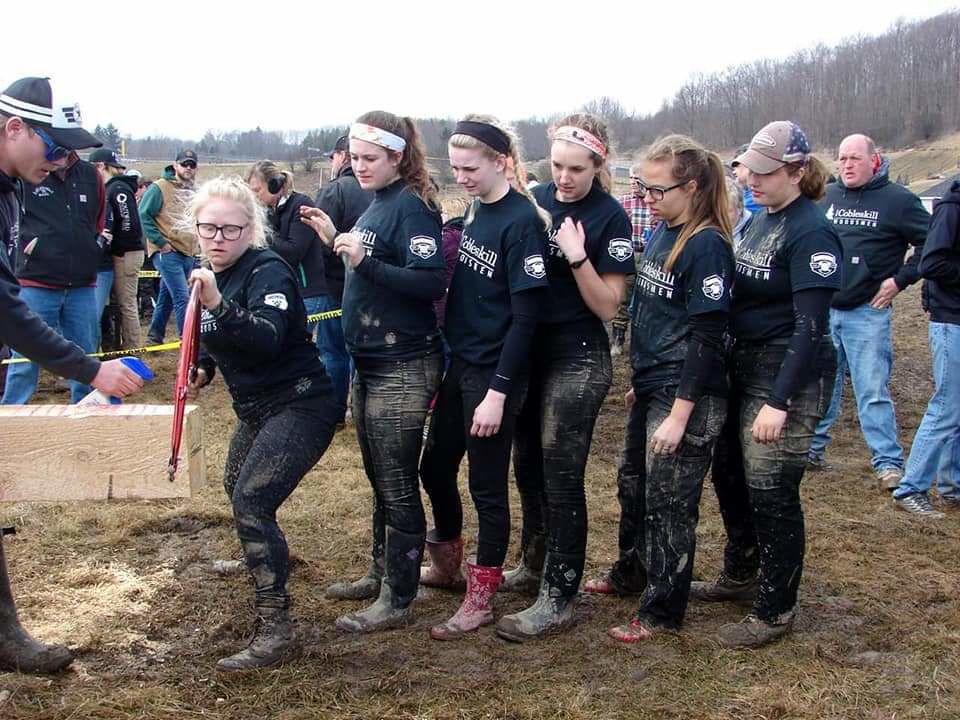 PORTVILLE — When Korah Witherell headed off to college after graduating from Portville in 2018, she expected to pick up some extracurricular activities.

She ended up choosing something in a more nontraditional realm. In her second college year, she is a member of the SUNY Cobleskill Woodsmen Club — and having the time of her life.

“I tell people I chop wood competitively,” Witherell said. “It’s so much fun. I’ve always been an athlete, playing soccer, softball and track, but I like the uniqueness of this sport. I joined it in the spring of my freshman year, so I’m still learning.”

She said that the competitive, co-ed, intercollegiate sport is actually a club at Cobleskill, whereas some schools support them as official teams.

“Our budget is a little less than for those that consider it a sports team, but we’re fortunate that our student government has helped purchase a lot of our equipment,” Witherell said. Some members buy their own tools, but blades and axes are typically expensive.

The sport has roots as woodsmen or lumberjack competitions that started in logging camps and some professional circuits still exist. Also known as timbersports, regional competitors strive for a spot in the Stihl Timbersports national event held in the summer. Witherell said her group competes with teams from schools such as Alfred State, Paul Smith’s College and SUNY College of Environmental Science and Forestry (ESF) in Syracuse.

Witherell has always loved the outdoors but wasn’t exposed to woodsmen events until after arriving at Cobleskill. She did have a couple of influences that helped guide her as a youngster growing up in the Portville area, however.

“I had always enjoyed being in the woods, especially after the first time I went hunting with my grandpa (Dave Witherell),” she said.

She had also helped her “Papa,” Jerry Gleason, her mother’s dad, in the Daggett Hollow area of West Clarksville. “We spent a lot of time together clearing trails and talking about wildlife.”

Gleason lives at The Pines now but Witherell fondly remembers those times.

When she told a friend she might become a mechanical engineer, he said she would be good at it but wondered if she would like it. Then, as she reflected on her shared love for the outdoors with her grandfathers, her plans evolved into a more suitable possibility.

“I dreamed of being an environmental conservation officer,” she said. With her mom, Leah, two college visits were scheduled that would help her achieve her goals. Once they saw SUNY Cobleskill, there was no need to visit ESF.

“I love it here,” Witherell said. “It’s so hands-on.” She will study for 3 1/2 years and do an internship for a bachelor’s degree before entering the workforce — continuing in competitions throughout.

“It was like learning a new language,” she said of her initiation into the sport. “Not only the skill of each event, but it has its own lingo. You just have to kind of do it, usually starting with splitting.”

She learned that a cut is a “cant,” the pieces they cut are called, “cookies.” A pulp toss event, involving team members tossing logs toward stakes in the ground is also known as “redneck horseshoes.” An event that requires stacking the cookies atop a log still being cut, Witherell called “the most dangerous game of Jenga.”

Examples Witherell gave of her participation include:

• Log roll, a team event with members broken into groups of two who will hit a log using peaveys to roll it down a designated path. Once both sides of the log hit stakes, the competitors jump over and roll the log back and the next group goes. The fastest time wins.

• Standing block, also known as vertical chop or V-chop. Witherell describes this as a doubles event where one partner chops vertically on half the block then the second partner finishes. Fastest time wins.

• Bowsaw, a team event where each member makes a cut on a block of wood. The fastest time for all complete cuts, or cookies, wins.

The goal at events is to showcase speed and precision with tools in traditional timbersports. Witherell has competed on Jack and Jill (co-ed) teams and this year is on a women’s team. Her boyfriend, Nick Fleckenstein, from the Niagara Falls area, competes in a variety of events, including pole climbing,

“I don’t do that,” she said. “We met on the team, but when we’re at a competition, it’s like we’re not even dating because we’re competing.”

She has competed in underhand, also known as H-chop for a year now.

“It’s one of my favorite events that I work a lot on with Jerry Scutt from Portville,” she said. “He was once in the pro series and held a world record. When I come home, I call him and ask if we can go through a few blocks.”

This event can be a doubles or triples event with each competitor getting his or her own block.

“You begin chopping once your partner has broken fully through theirs, and the best combined time wins,” she said. “You make your cuts then turn the block and chop the other half and it comes out beneath you.”

She added that it is not like helping her dad, Garth Witherell, split wood in the backyard.

She also learned from another pro, Nathan Waterfield of Pennsylvania, who hosts competitions every year. She has become pretty good at underhand cuts and single buck using a cross cut saw (also known as the “misery whip”).

“Most of the events involve repetition that requires lots of muscle memory,” she said, noting she can still get sore. “I like the sport because you’re always learning something different and there are often new events and challenges.”

Witherell said her family has attended events. They consider her involvement “the coolest thing ever.”

“My mom compares them to track meets because a lot of events go on at once with people cheering each competitor on,” Witherell said.

SUNY Cobleskill is working to build its reputation in the growing sport. It can definitely have its dangers, however.

“Your tools can glance off the wood or the axe handle could fling off,” said Witherell. “We exercise safety 100 percent and wear safety gear.” There is chain mail such as socks made of linked chain to cover toes and shins, worn in the shoe.

“We also use booties which resemble the Tin Man’s shoes that go over our shoes for splitting events, but they are clunky,” she said. Use of chain saws requires chaps, protective eye wear and earplugs and axes are kept in sheaths until ready for use.

“You really have to focus and pay attention to what you’re doing,” Witherell said. “But I like the challenge of it. I’m having so much fun.”