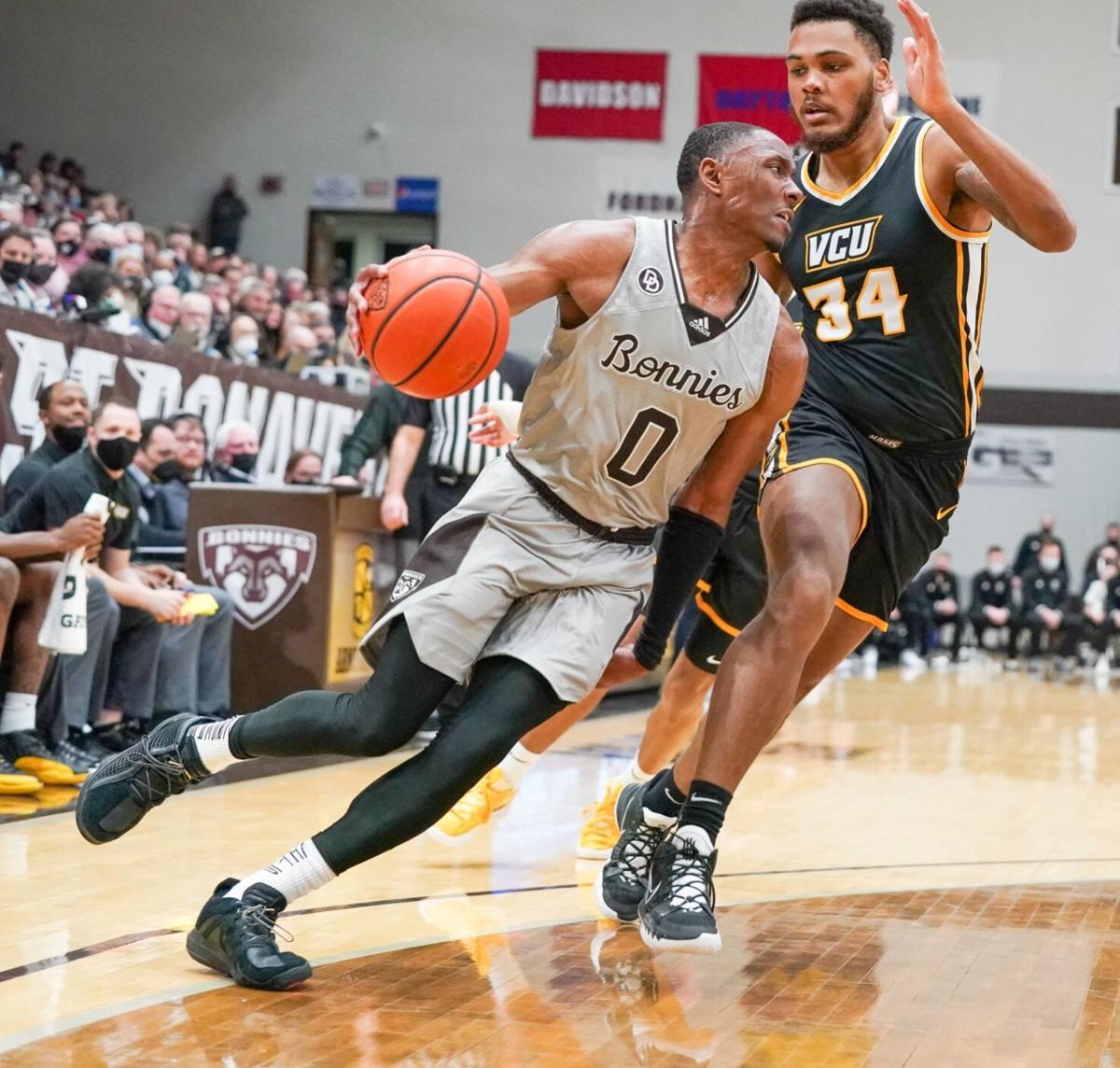 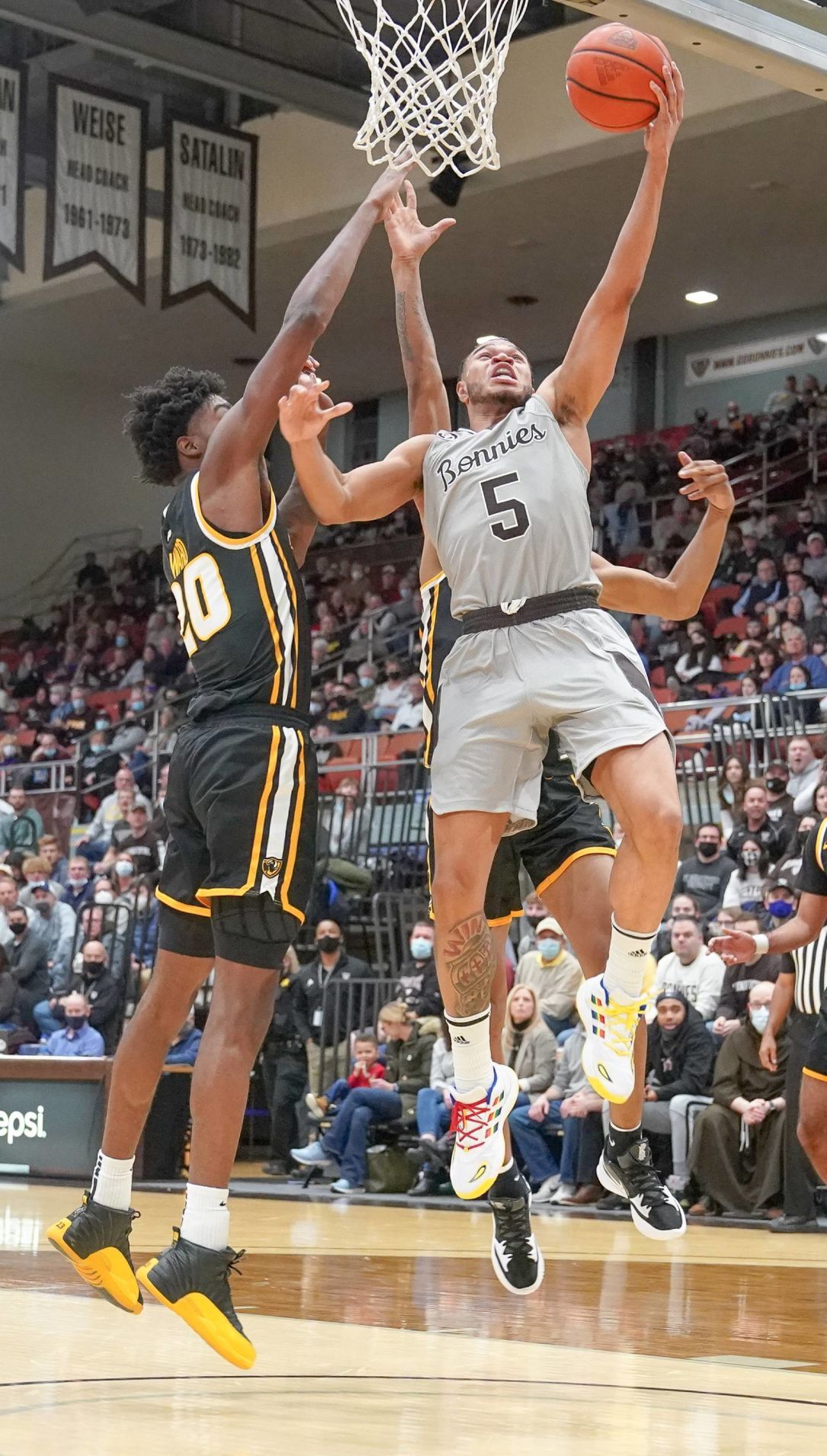 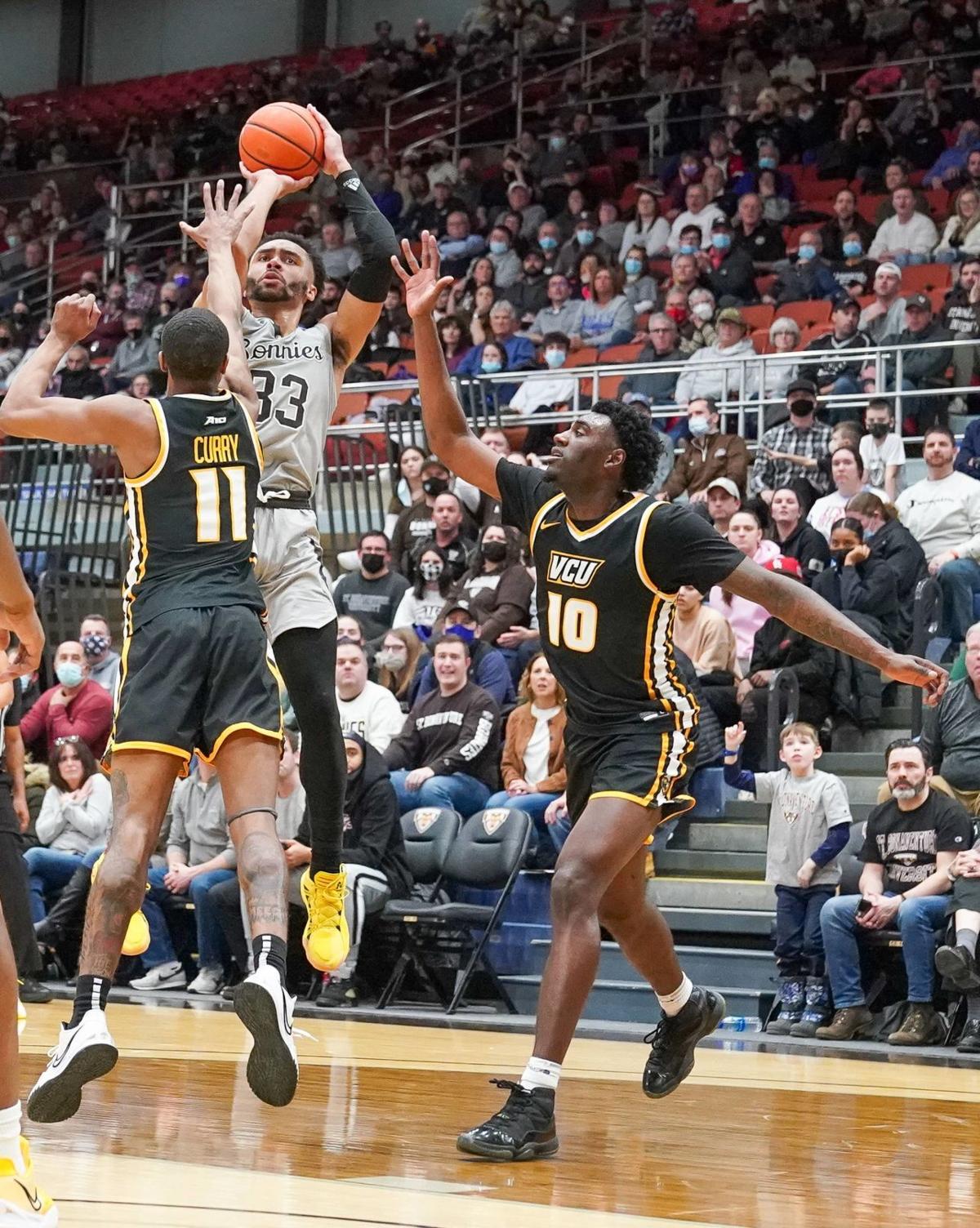 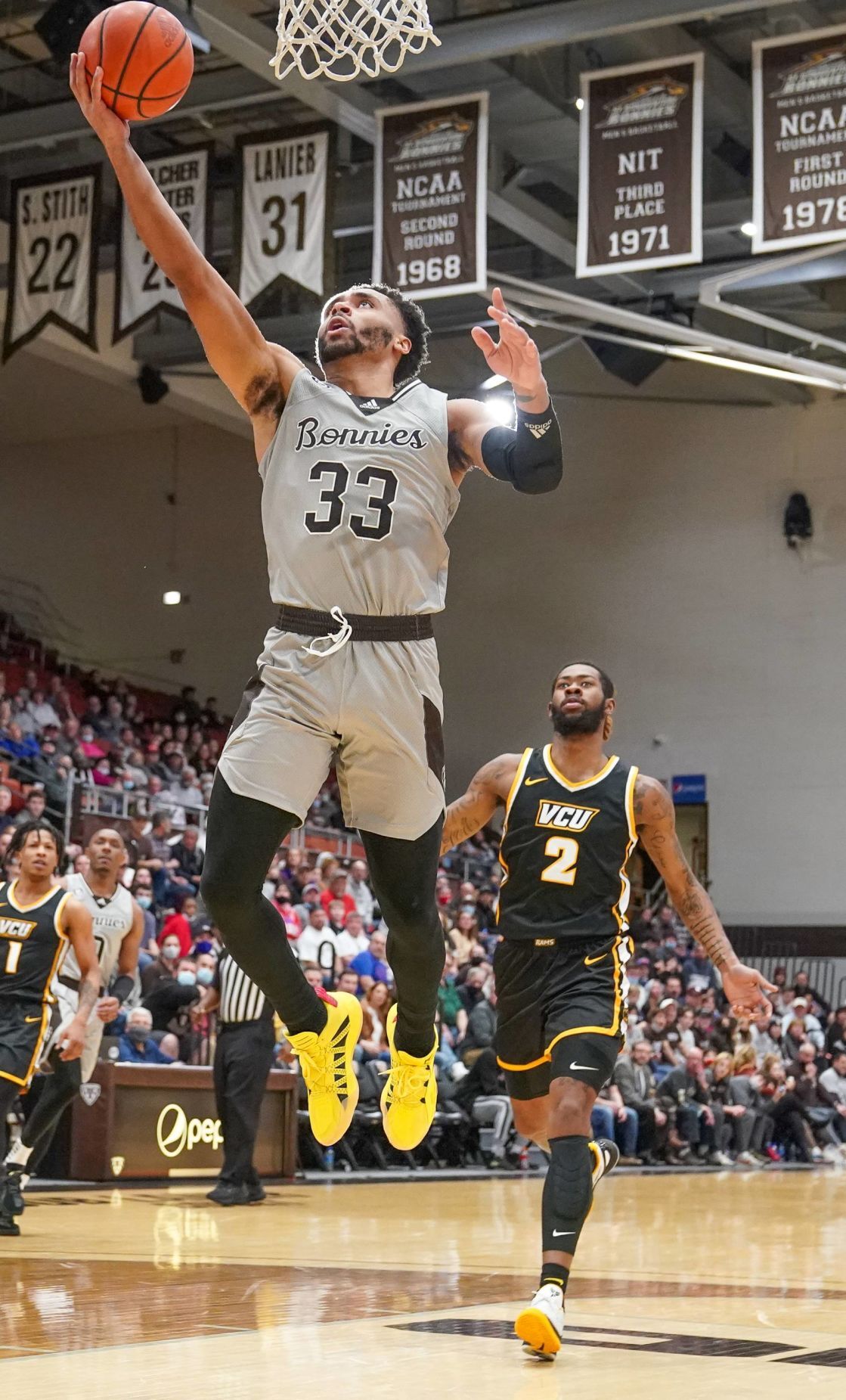 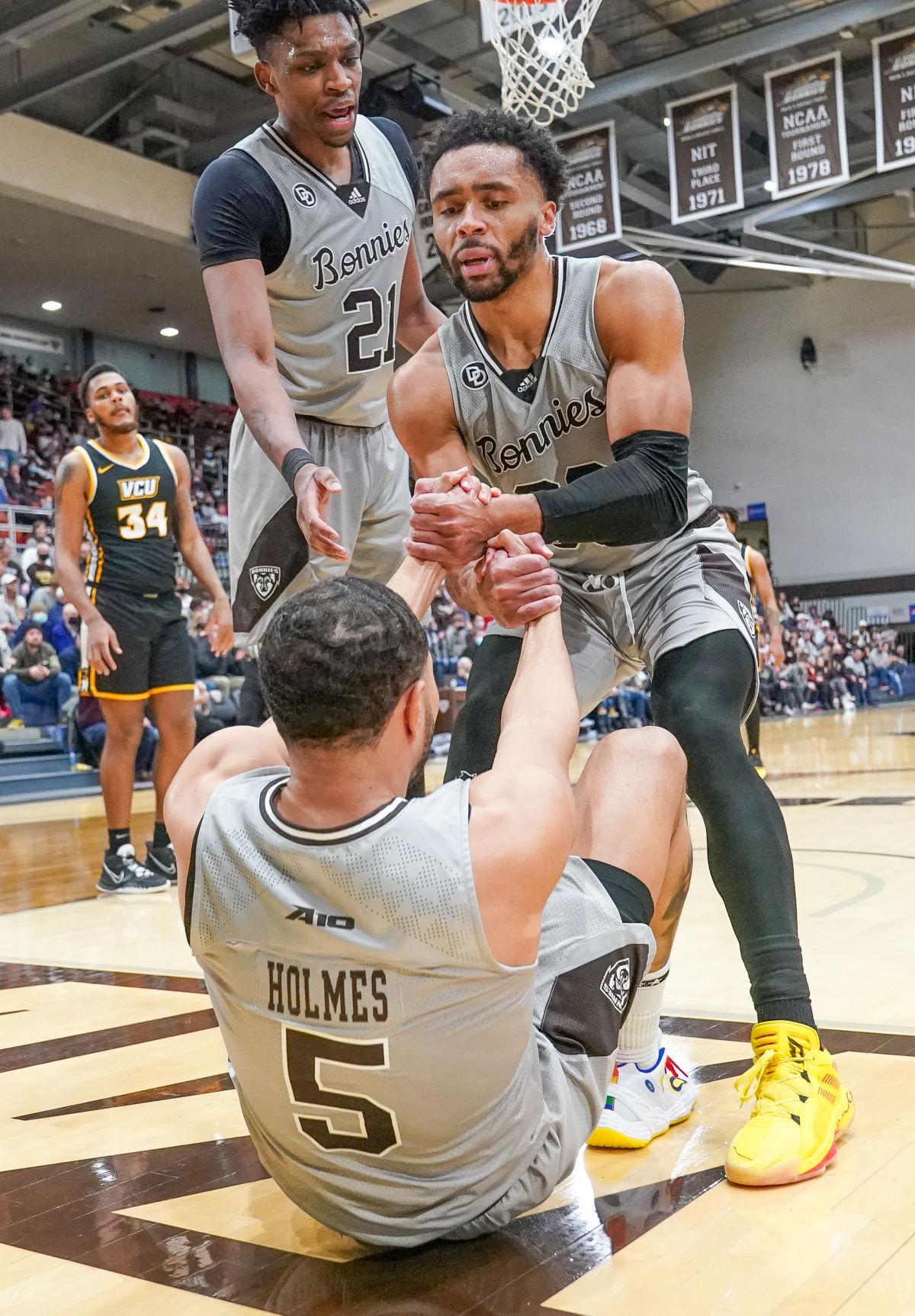 St. Bonaventure’s Jalen Adaway (33) helps teammate Jaren Holmes (5) off the floor in the second half against VCU on Friday. 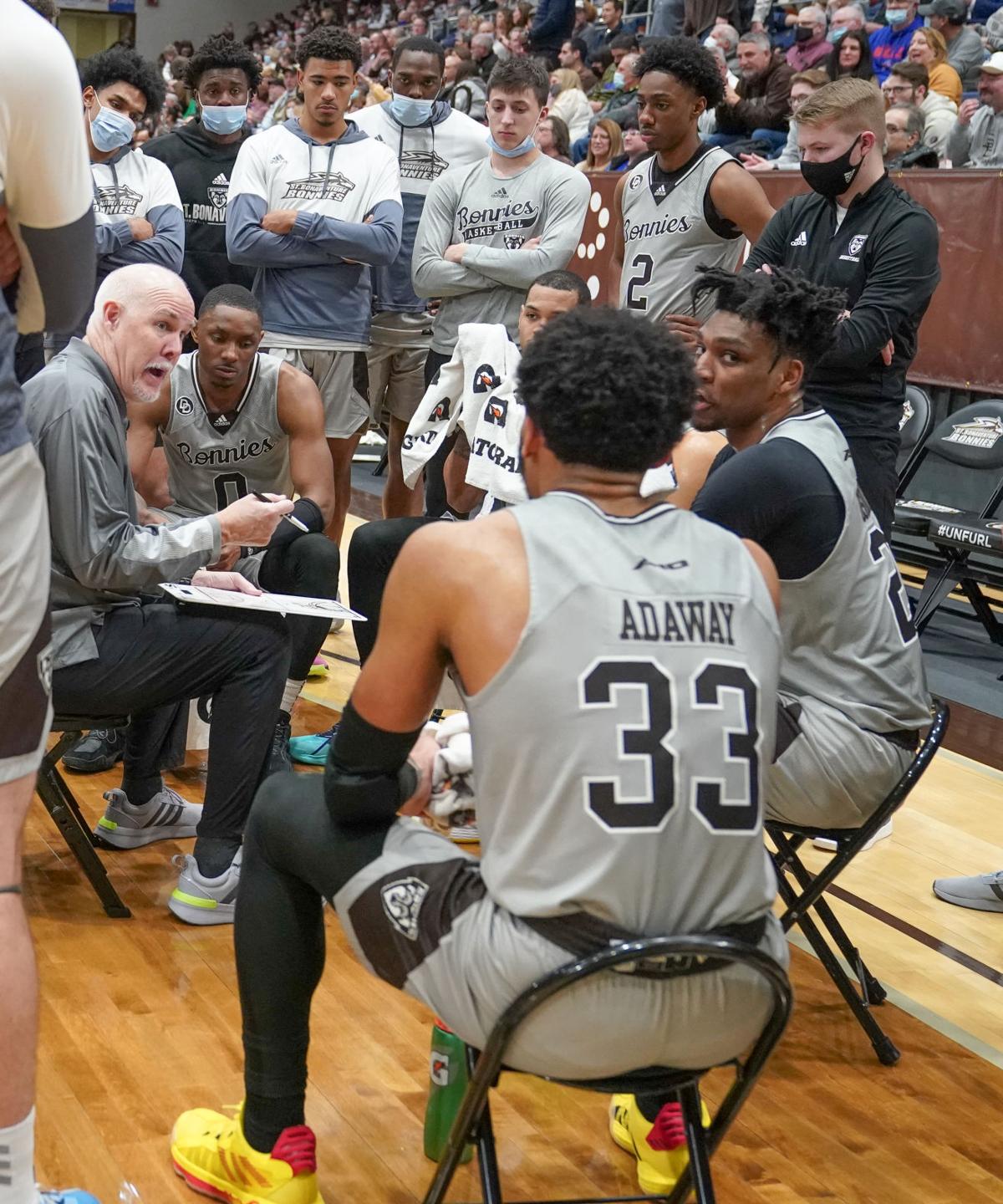 St. Bonaventure players sit with coach Mark Schmidt during a timeout in the second half of a game against VCU on Friday. 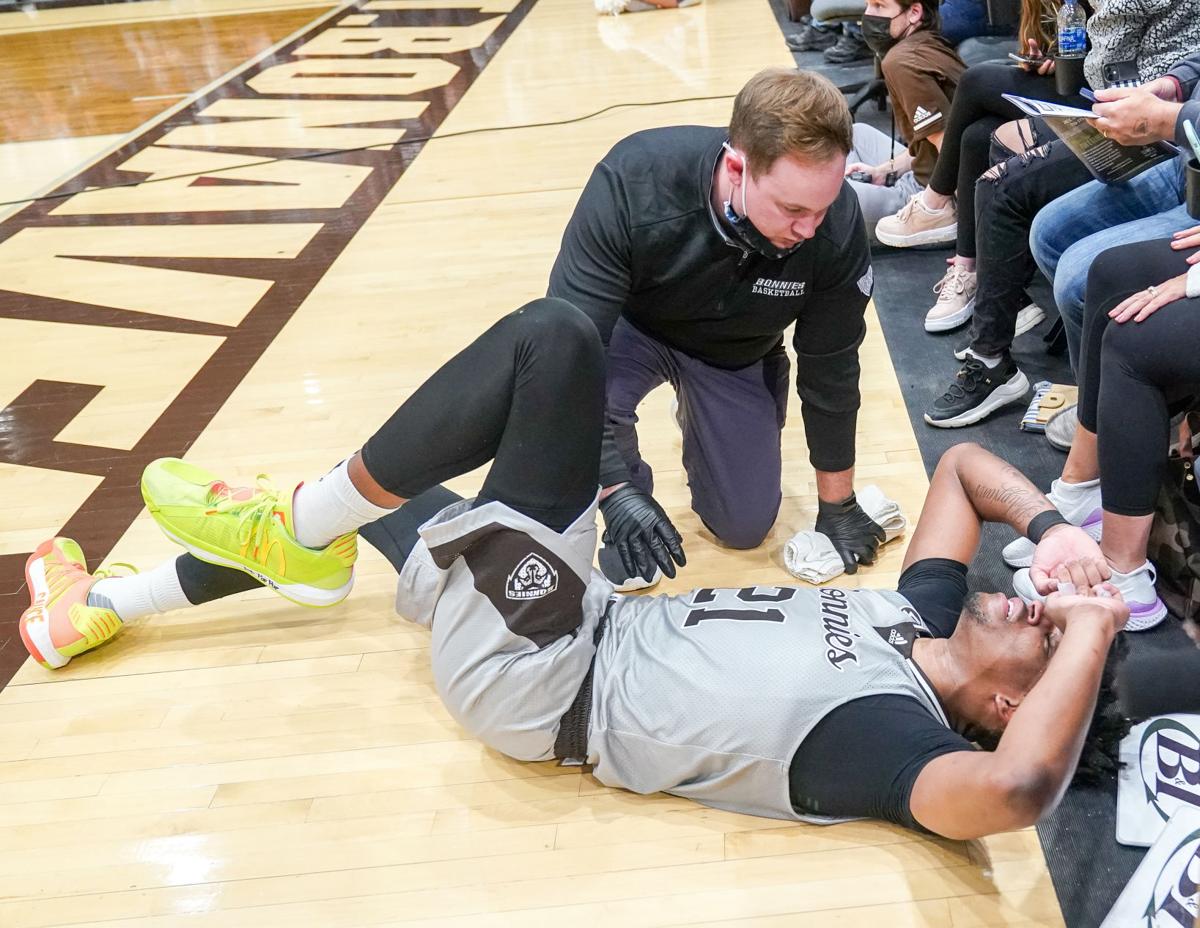 A trainer attends to St. Bonaventure center Osun Osunniyi (21) after a fall in the first half of an Atlantic 10 Conference men’s basketball game against VCU Friday night at the Reilly Center.

St. Bonaventure’s Jalen Adaway (33) helps teammate Jaren Holmes (5) off the floor in the second half against VCU on Friday.

St. Bonaventure players sit with coach Mark Schmidt during a timeout in the second half of a game against VCU on Friday.

A trainer attends to St. Bonaventure center Osun Osunniyi (21) after a fall in the first half of an Atlantic 10 Conference men’s basketball game against VCU Friday night at the Reilly Center.

ST. BONAVENTURE — Kyle Lofton motioned to former teammate Courtney Stockard, who was sitting along the near sideline.

His St. Bonaventure men’s basketball team had dominated VCU for most of this second half, stretching a six-point halftime lead to as many as 19 midway through the period. Time and again, it had beaten the Rams’ pressure defense for transition buckets, kick-out jumpers and trips to the foul line.

And in this moment, up 63-46 with 6:45 remaining, it just missed what might have been its most thrilling play to that point, as Osun Osunniyi was fouled on a baseline alley-oop dunk attempt, though he made good on one of two free throws.

Missed slam or not, Bona was firmly in control in this nationally televised showcase matchup against one of the hottest teams in the conference, the same squad it had produced this kind of half against last January. And the Bona point guard knew it. So he looked at Stockard, put both hands to the side of face and closed his eyes, the familiar gesture for falling asleep, and the same one the two shared together in 2018-19 whenever a win was in hand.

The Bonnies had all but put VCU to bed.

Jalen Adaway racked up 25 points and eight rebounds and Bona put together its most complete performance since Charleston in rolling past VCU, 73-53, before a thinned out audience of 3,512 at the Reilly Center on Friday night.

Afterward, coach Mark Schmidt was willing to assess it as the “best game we’ve played in a while.” And in so many ways, it was. Bona (10-4, 2-0) got off to a strong start, fended off a late first-half rally to bring a 34-28 lead into the break and took a double-digit lead within the first three minutes of the second half. In total, it went on a 21-4 run that spanned both halves to turn a one-possession game into a 50-33 advantage with 13:31 left.

And in this one, they maintained it throughout.

After struggling to close teams out in early December, dropping a pair just before Christmas and looking shaky in its return from a lengthy COVID pause on Tuesday against La Salle, the Bonnies looked like the team they were prior to Thanksgiving, the team they were billed to be in the preseason. And by the time the clock hit zero, their first statement of the new year had been made.

“It was a good victory,” said Schmidt, when asked how important it was to win a game of this magnitude in THIS kind of fashion. “I’m not gonna say it’s better than any other one. Every game is important. We want to play well, and I thought we played well against a really good team. Coming off those 25 days (off), coming off a win against La Salle where we didn’t play great, beating a team of this caliber, that’s a really good team. It says a lot about our team and our players.”

Bona, behind Lofton and Jaren Holmes, has long been a team that handles pressuring defenses well, which has allowed it to break opponents’ in initial line of defense and have almost free reign vertically the rest of the way. That’s what the Bonnies did last year in their home comeback win over the Rams, when they outscored VCU 45-14 in the second half. It’s what they did in their Charleston Classic championship thrashing of Marquette, a team similar to VCU in the way it thrives off opponents’ turnovers in transition.

By the numbers: How Oregon stunned No. 7 Arizona on Saturday night

Vets Folk, Gronk again led the way among ex-Wildcats, Tucsonans in the NFL

But if there are only so few turnovers to be had, the Rams and their aggressive style can be handled. And that’s the formula coach Mark Schmidt’s team used again on Friday night.

In the end, it almost beat VCU at its own game, holding an 18-12 advantage in points off turnovers and becoming the downhill aggressor itself, making 23-of-27 at the free throw line compared to the Rams’ 6-of-8 effort.

“Against VCU, it’s really difficult if you have a young team because it’s so hard to simulate in practice what they're doing,” Schmidt said. “But our veteran guys have played against them numerous times (Bona has won three of four over VCU since last season), so they understand what the press is all about, how you have to have spacing. We have a veteran team that doesn’t panic, that understands what they’re looking for.

“It would be different if you had a really young team, because that pressure is relentless, and we have good players; we want to try to get by the first line and then attack and play vertically, and then you have to make good decisions. If you have young guys, they, for the most part, don’t make good decisions. For veteran guys, the game slows down. That was one of the keys tonight.”

Adams was superb, keying Bona’s fast start in both halves. Holmes added 17 points and six rebounds and Lofton finished with 13 points, six assists and five steals against an opponent that prides itself in the latter category.

“Jalen played really well,” Schmidt said. “We need him to do that, he’s capable of doing that. When he’s playing well, we’re that much better. He shot the ball, he got to the foul line, he defended. We need Jalen to play like that.”

Bona nabbed another top-flight win, having now topped Marquette (NET No. 44), Boise State (No. 46), VCU (No. 50) and Clemson (No. 65), with losses to UConn, without Lofton, and Virginia Tech. It snapped a seven-game win streak for VCU, which had thrashed its last two opponents, and in its first home game in over a month, at a time it really needed it, let it be known that this is still the team to beat in the Atlantic 10.

“It’s hard to say,” said Schmidt, when asked if this had the same resonance as the Marquette victory. “Marquette seems like it was in 2015. We were off for 25 days; it’s been difficult.

“We didn’t play great against La Salle, but we found a way to win and that was really, really important, and then today was a complete game. We didn’t play perfect, we missed some shots, we missed some defensive assignments, but I thought the effort was there, we stuck together, we were committed to each other. It was a good performance against a really good team.”

“Hopefully we can get back to practice and become more consistent.”