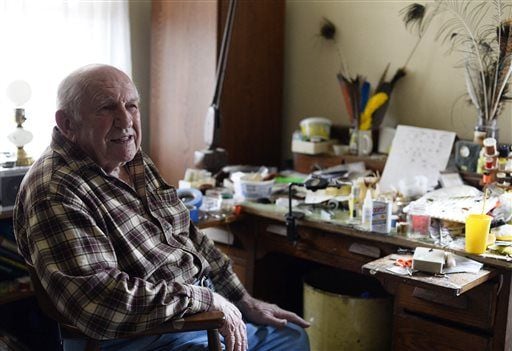 Ed Shenk is photographed at his workbench in Carlisle, Pa., on Jan. 21, 2016. Shenk, 89, is a famous fly fisherman and fly tier. (Kate Penn/York Daily Record via AP) 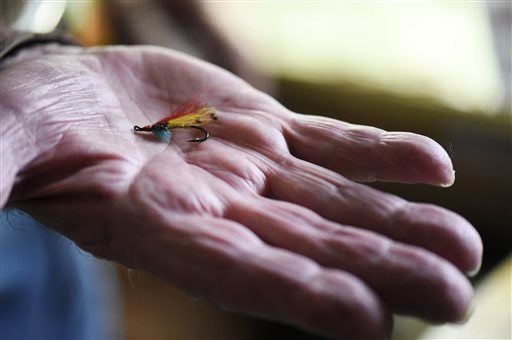 Ed Shenk shows a fly he calls April's love, named after his girlfriend, at his home in Carlisle, Pa., on Jan. 21, 2016. Shenk, 89, is a famous fly fisherman and fly tier. (Kate Penn/York Daily Record via AP)

Ed Shenk is photographed at his workbench in Carlisle, Pa., on Jan. 21, 2016. Shenk, 89, is a famous fly fisherman and fly tier. (Kate Penn/York Daily Record via AP)

Ed Shenk shows a fly he calls April's love, named after his girlfriend, at his home in Carlisle, Pa., on Jan. 21, 2016. Shenk, 89, is a famous fly fisherman and fly tier. (Kate Penn/York Daily Record via AP)

CARLISLE, Pa. (AP) — Even now, at age 89, Ed Shenk is surrounded by feathers and furs. He looks across the upstairs room in his house in Carlisle and points to a trunk against the far wall. He doubts if he's seen the bottom of it in 25 years.

A coyote fur, one of six he trapped on a farm years ago, hangs from a hook on the back of the door like a robe. Peacock feathers droop out of a vase. An animal skull sits on the top of a cabinet. A picture of his sister, killed in a childhood mishap almost 90 years ago, hangs on the wall.

"This," he said, holding his hands outstretched, "is the accumulation of 70 years."

His passion for fly fishing and tying flies outgrew the "sewing room" where he started when his late wife and four children lived with him. He eventually moved his tying operation to a larger room, and he filled it with a multitude of feathers, fur, thread and hooks needed to create imitations of bugs or minnows, caterpillars or spiders. A pinch of fur, a section of feather and a twist of thread around a hook creates the "fly."

Shenk is one of the last of his kind.

"He's the top gun," said fly fisherman Joe Humphreys, who has known Shenk since the 1940s and worked with him at fly fishing schools for more than 30 years. "Put it this way, a lot of guys talk a good game, he is the game."

Shenk helped to make streams in central Pennsylvania some of the most famous in the nation. He fished them. He talked about them. He taught classes.

Shenk created his own fly patterns, and dozens of videos exist on YouTube demonstrating how to tie variations of his patterns. A sitting U.S. president invited him and other fly fishermen to entertain him on a retreat.

"Perhaps the real significance of Ed Shenk lies not just in his expertise and many individual accomplishments, but as a carrier of the torch and a link between the founders of the limestone tradition and the next generation of fly-fishers to whom the torch will be passed," Thomas E. Baltz wrote in the book, "The LeTort: A Limestone Legacy."

With each passing year, however, it's not as easy for Shenk to do what he loves.

For the first time since he was 15, he does not believe he will tie flies to sell this year. He no longer sits for hours at a time behind his desk, finishing about a dozen of his LeTort crickets in about an hour — or one in a little under five minutes. The medication he began taking after a November stroke forces him to lie down after tying one or two flies. And after a lifetime of fishing trips, he estimates he fished just a dozen times last year.

"I'm to the point now, I just enjoy going out and making just a few casts," Shenk said.

A childhood memory of opening day of fishing season stands out.

Men stood shoulder to shoulder along the LeTort Spring Run. Big fat worms, night crawlers, used as bait. Every man fighting for a spot to cast, a fish to catch. Shenk only watched from afar.

"This one guy on the corner ... I watched him catch four or five fish there," Shenk said. "The other guys weren't doing a damn thing."

Shenk paused to mimic how the man used short, slight tugs on the rod as he retrieved his line.

"There was a little finesse, and I never knew who it was," Shenk said. "A couple years later, I finally talked my dad into taking me trout fishing."

His interest piqued, he had to try fly fishing. He just needed a fly rod.

"I had an uncle who was a non-fisherman, but I must have done a lot of talking," Shenk said. "He bought me my first bamboo rod."

Shenk caught his first trout fly fishing on the LeTort at age 7. He never stopped.

Shenk estimates about half his classmates in Penn State's forestry program joined the U.S. Geological Survey after graduating in 1951.

He was no different.

For about 10 years he created topographical maps for the government.

"Oh, I loved it," Shenk said about the work.

The job itself, however, required extensive travel. He traveled from New England to as far west as the Mississippi River.

"Actually I hated it, I really did," Shenk said of the travel. "I'd get home not even every weekend for a couple years."

On location, he would trap to make money.

"I liked foxes and mink, but muskrats were fine," Shenk said. "A friend and I were trapping the LeTort and we got permission to trap a few farm lots, too. The first night we took 100 muskrats, and they were bringing a buck and a quarter. Back in the '50s that was, you know, a fair amount of money."

On the road, he tinkered with ideas on how to change flies.

"I put the flat wing on top of (his LeTort cricket) for a better silhouette ... I'd be thinking of this stuff at night," Shenk said.

And after each trip, he would return home to Carlisle.

Born in a house on A Street in Carlisle, he moved with his wife to a house along a road that intersects with A Street. He's lived there since the 50s. When he wanted to fish, he always had the LeTort, one of the most renown trout streams in the country.

The stream's reputation grew since it had huge brown trout with finicky appetites, with articles by Charlie Fox and Vince Marinaro adding to the LeTort's allure. The trophy fish wouldn't strike at anything a fisherman cast, to land a fish on the LeTort fishermen needed skill. "Field & Stream" called the LeTort the birthplace of American-style dry fly fishing in a 2014 article.

"There's only a few people that can catch them in here, and that's the truth," Fox told the Washington Post in an article published May 20, 1984. "This is very exacting fishing."

When he left the U.S. Geological Survey after about a decade, it was for a job close to Carlisle — and the LeTort. He worked for the Tri-County (Cumberland, Dauphin and Perry) Planning Commission for 27 years until he retired in 1992.

Humphreys tells the story of biking to Thompson Run to fish in high school. He thinks it's the first time he ran into Shenk, then an undergraduate at Penn State.

"I didn't like his competition, or appreciate him being in my stream," Humphreys said with a booming laugh.

They eventually taught together at fly fishing schools.

"He's very creative, innovative," Humphreys said. "Maybe a little ahead of his time. The Shenk sculpin and LeTort cricket? They're go-to flies."

Humphreys, himself a legend in the sport, landed a then-Pennsylvania record 34-inch, 15-pound brown trout in 1977.

"I have a lot of love and respect for that guy; he's always been one of my heroes," Humphreys said.

Murray, 76, has known and fished with Shenk for about 30 years. Operating a fly shop in Edinburg, Virginia, for 50 years, he has sold Shenk's flies because he thinks Shenk's work is some of the best.

It all goes back to perfecting the silhouette of a cricket on the water, Murray said. He has seen flies tied so particular, with rubber legs or foam bodies, they might fool the human eye, but they don't seem to work as well on the water.

"I want the fly that fools the fish — not the fisherman," Murray said.

Shenk doesn't mince words. Not now, maybe ever. And in an odd twist, his lack of inhibition is part of his charm.

"He's very opinionated, but he tends to be right most of the time," Murray said. "He's like my accountant: You might not like what he's saying but you better listen to him."

When Shenk watched Jimmy Carter cast in 1980, he let his opinion be known.

"This is probably the first chance I will really get to criticize a president," Shenk recalled saying, "but your casting really stinks."

And then he offered, "You know I'm kidding."

Prodded for the truth on Carter's casting, Shenk admits he was truly kidding, "Oh no, he was OK."

Carter remains a fly-fishing enthusiast, writing of his fly fishing trip to Mongolia for "Fly Fisherman" in 2014.

"He was too nice a guy," Shenk said of Carter.

Shenk planned to trap this season. It didn't happen. He lost some range of motion in his left arm after a November stroke.

"I guess I'm done," he said about his lifelong love of trapping.

He still ties flies, but not the marathon sessions he used to complete.

Even the fishing conditions of his beloved stream have deteriorated.

"It's done as far as I'm concerned," Shenk said about the LeTort's reputation as a first-class trout stream.

"So many houses with wells, the water volume I would guess is 50 percent less than when I was a kid," Shenk said. "It doesn't appear that way because the bottom has filled up with silt and everything. It appears the actual level is the same, but everything underneath (the surface) has changed."

Big holes are not as common, Shenk said, noting farming along the stream has added to the problem. Two poisonings have also hurt the fish population and trout food sources, including sculpins and other marine wildlife trout eat.

Yet when quizzed on his favorite fishing spots, Shenk names the LeTort. It's still his stream. He has his reasons.

"So many memories," he said.