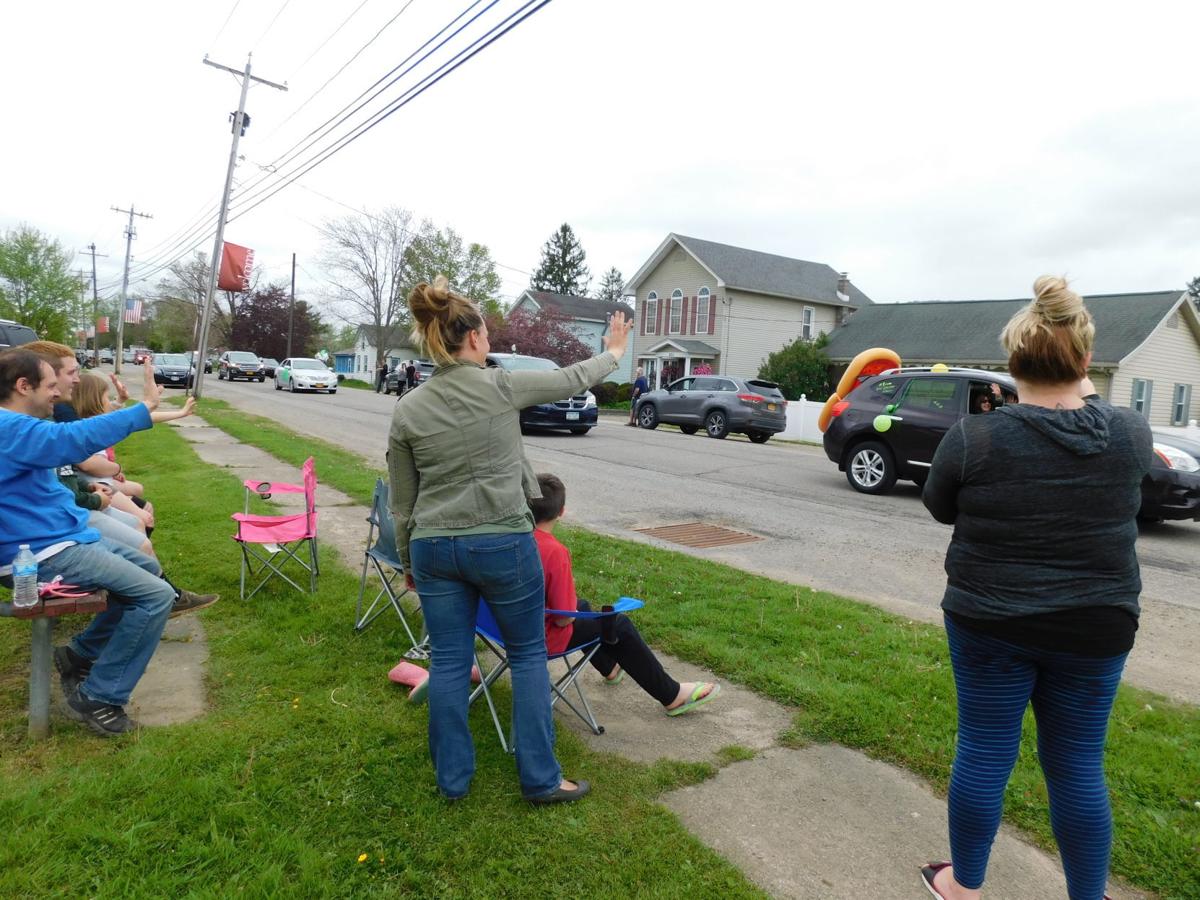 Parade attendees wave to decorated vehicles containing seniors from Allegany-Limestone High School during Friday’s parade through Limestone. The vehicles traveled to Allegany and eventually made their way to the high school to further honor graduating seniors. 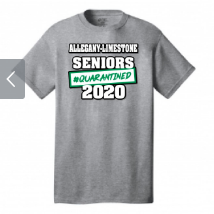 This is the special T-shirt made for the class of 2020 at Allegany-Limestone High School. 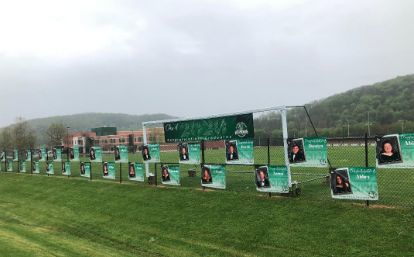 This "wall" of posters depicting Allegany-Limestone High School seniors is set up on the upper soccer field in Allegany.

Parade attendees wave to decorated vehicles containing seniors from Allegany-Limestone High School during Friday’s parade through Limestone. The vehicles traveled to Allegany and eventually made their way to the high school to further honor graduating seniors.

This is the special T-shirt made for the class of 2020 at Allegany-Limestone High School.

This "wall" of posters depicting Allegany-Limestone High School seniors is set up on the upper soccer field in Allegany.

LIMESTONE — Sirens were blaring and students and teachers were waving when the Allegany-Limestone senior parade of vehicles started out in Limestone Friday and continued on to Allegany.

The parade was held to honor 2020 seniors who will not be able to participate in a traditional graduation ceremony or other events at the high school this year due to social distancing required by the COVID-19 epidemic.

Teachers along the Limestone route said two parades were held for teachers of the elementary students as well as for the seniors to show support for all age groups in the school district. Providing assistance for the event were the Cattaraugus County Sheriff’s Office, New York State Police, Limestone Fire Department, Allegany Police Department and the Allegany Fire Department.

Superintendent Tony Giannicchi said the elementary teachers’ parade took a winding route through district roads and neighborhoods while the seniors were on a main road route that concluded at the high school.

“There is also a nice ‘wall’ of senior banners by our upper soccer field,” Giannicchi added. “I have noticed a lot of people stopping to look at them ... we had the senior parade route go by the posters without letting the seniors know we had them up.”

School board member Jay King stood along the parade route in Limestone with his family and said he thought the event was a good idea.

“For the whole community, it’s a really nice way to send the seniors off,” King said, noting the entire school board was participating in the event.

“We’re all stationed at different places along the route. We have three (triplet children graduating), so we have three places we have to go” for the parade, King commented.

Residents along the route in Limestone included Crystal Watson who has children in the elementary school.

“My kids were really bummed they weren’t going back to school,” she said. “And the younger kids don’t really understand why.”

Watson said she was also appreciative that the parade was starting its route in Limestone.

“A lot of times I feel like they forget about us,” she remarked.

An elementary teacher on the route, Kara Mascioni, said she also was glad the event was held to honor the seniors and younger children. She noted that only a certain number of educators could ride in the parade as the number of participating vehicles was limited for the event.

“I definitely think it builds morale and I think it’s a great thing,” Mascioni said. “One of my students is down there watching.”

A retired teacher showing support for the parade was Linda Thiel who said she also was happy the event traveled through the community.

“A lot of times Limestone people can’t connect (to district events), so this is very nice to connect to this,” Thiel shared.