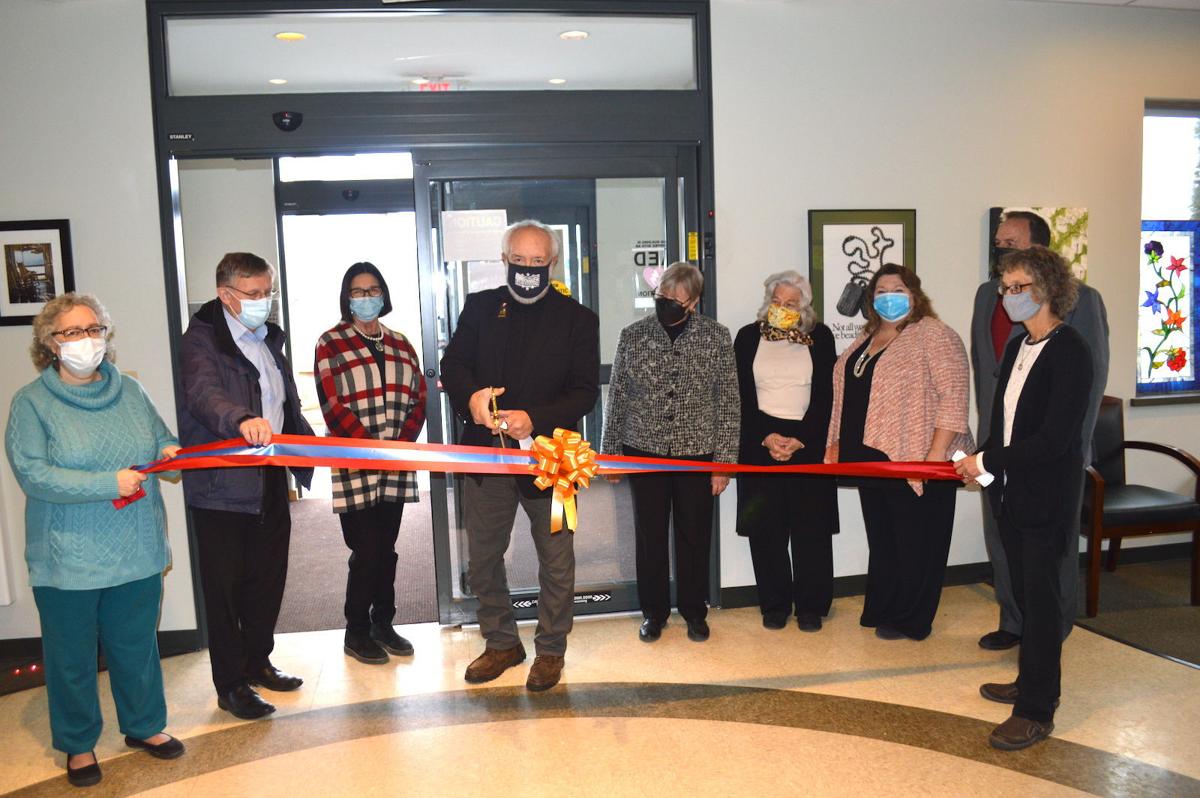 Friends, family and colleagues of Wallace C. Higgins watch Wednesday as his son Donald cuts a ribbon dedicating a Wall of Honor in his father’s name at the Office of the Aging. 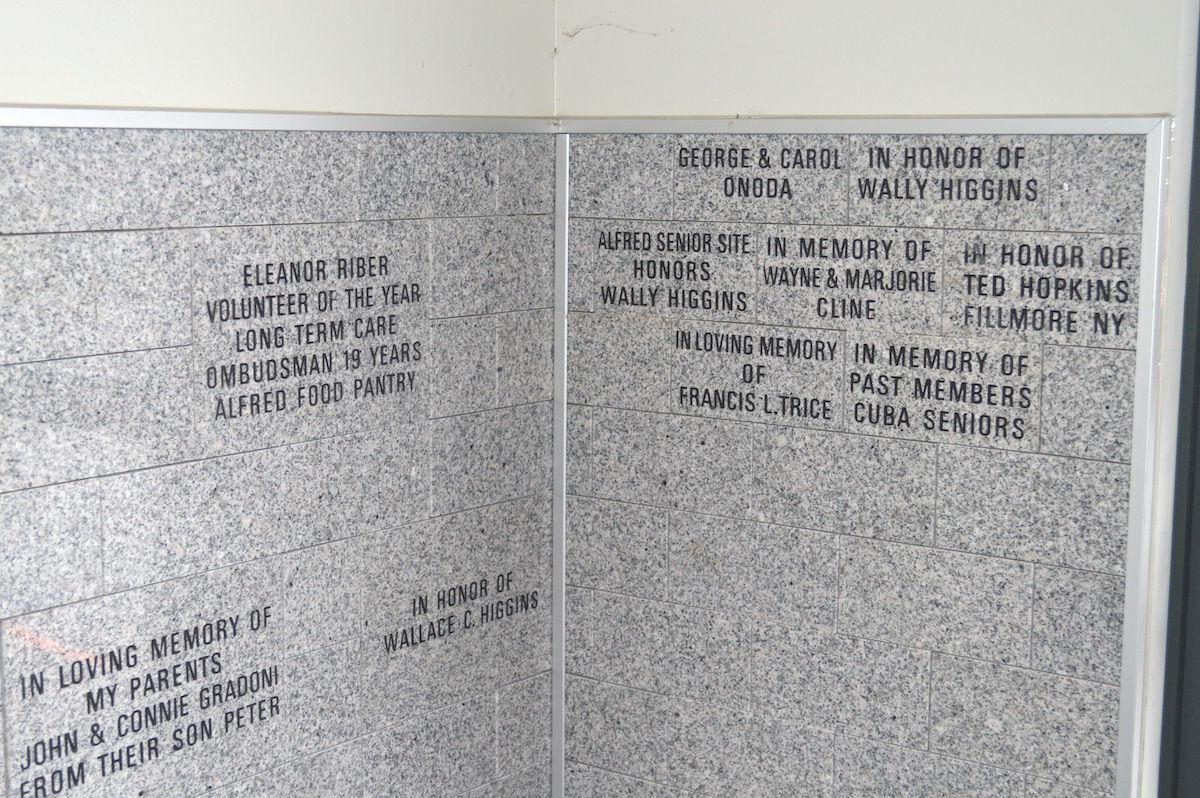 Concrete blocks designate the memorial wall at the Allegany County Office for the Aging in honor of Wally Higgins. 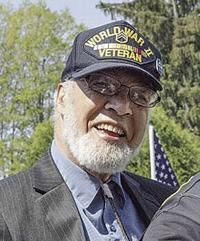 Higgins passed away at the age of 91 in August 2018. Prior to that he had been lauded across the county, state and by Congress for his service as one of the original Tuskegee Airmen in World War II.

But for Allegany County his efforts on behalf of senior citizens was more significant — so important, in fact, that Wednesday in the vestibule of the Office for the Aging at Crossroads he was officially honored with a plaque and a Wall of Honor in his name.

Colleagues, friends and family gathered to watch Higgins’ son Donald cut the ribbon at the entrance of the building, formally opening the Wall of Honor.

In 2013 Kim Toot, while head of the OFA, led the effort to create the wall in Higgins’ honor.

“We’ve had it for a few years, but we are just now getting around to dedicating it in Wally’s honor. We call it ‘Wally’s Wall,’” she said prior to the ceremony.

The wall was dedicated by the Allegany Senior Foundation, a group Higgins helped to found in 2003 to provide help and support to the OFA. Funds from the sale of memorial blocks in the wall help fund numerous programs for the OFA. Among those are Meals on Wheels.

The foundation’s mission was set early on by Higgins, who described it as, “Our mission is to identify gaps in services, find programs to fill those gaps and fund those programs. We want to be sure that Allegany County remains a wonderful place to grow up and grow old.”

At the dedication ceremony, Reita Sobeck-Lynch, the current ASF president, told the more than 30 people gathered, “Since its founding in 2003 the Allegany Senior Foundation has funded over $500,000 worth of services for seniors in Allegany County.”

Family and friends recalled the generosity and service Higgins demonstrated throughout his life.

Toot recalled that she first met Higgins in the early 1990s.

“We shared stories about his time as a professor at Alfred University, his family, his travels to other countries to help them with their ceramic engineering development, his service with the Alfred Lions Club and how he wanted to help the Allegany County Office For the Aging by serving on their Advisory Council,” she said. “We worked together for years. His quiet, but persistent nudging, pushing us at the county to continue doing what we do, but also insisting we could do more. He led the advisory council for years.”

Higgins led the way in the construction of the OFA/Veterans Affairs offices at Crossroads. Retiring County Legislature Chairman Curt Crandall said Higgins led the group that approached Houghton College for the county to purchase the former Houghton Academy building for the original OFA office. Higgins then convinced the county to construct an additional building — the current office.

“We would not be standing in this facility the way it is today without Wally’s efforts. If this is a reminder of Wally it is a good reminder,” Crandall said, adding that the dedication ceremony was his last official act as chairman.

Toot said that it was “Wally’s dream to see the entire facility dedicated to services for senior citizens,” including medical facilities and senior housing.

At the dedication ceremony, Donald Higgins thanked the group for honoring his father.

“We’re very honored,” he said. “The work my father did with the Area Foundation and the OFA was very important to him. I’m very proud of my dad, and hope that one day I’ll be half as good as he was.”

Other members of the Higgins family were also at the dedication service. His daughter, Sharon Stiller, said that when she first moved back to the area she was annoyed when her father would tell her about the services provided by the OFA.

“Now that I’m older, I’m thankful for the work my father did,” she said.

Higgins was born in Kendall in 1927 and lived on a farm. He trained with the Civil Air Patrol before enlisting in the U.S. Army Air Forces in 1943 at the age of 18 and before graduating high school. After initial training in New Jersey he was transferred into the Tuskegee Airman program in Biloxi, Miss., where he learned to fly — and encountered racism for the first time in his life — he said in an interview before he died.

His flight training was discontinued after World War II ended in Europe. He was transferred to the Pacific Theater, where he headed an all-black unit building roads, bridges and storage buildings. At the end of the war, he earned his high school diploma and enrolled in the New York State College of Ceramics at Alfred University.

He graduated in 1952 and began his career as a model/mold-maker for Glidden Pottery in Alfred. After five years he became a technical specialist at the College of Ceramics. He went on to become an associate professor there and a world-wide consultant for ceramic projects. He retired in 1985 as Professor Emeritus.

He was a longtime member of the Bakers Bridge Historical Society in Alfred Station and was a 64-year member of the Union University Church in Alfred, where he served on the board of trustees, sang in the choir and was a lay leader.

Stemming from his military and civilian career, Higgins received many honors and medals, including the Congressional Gold Medal and the state Gold Medal for Service and induction into the New York State Hall of Fame.