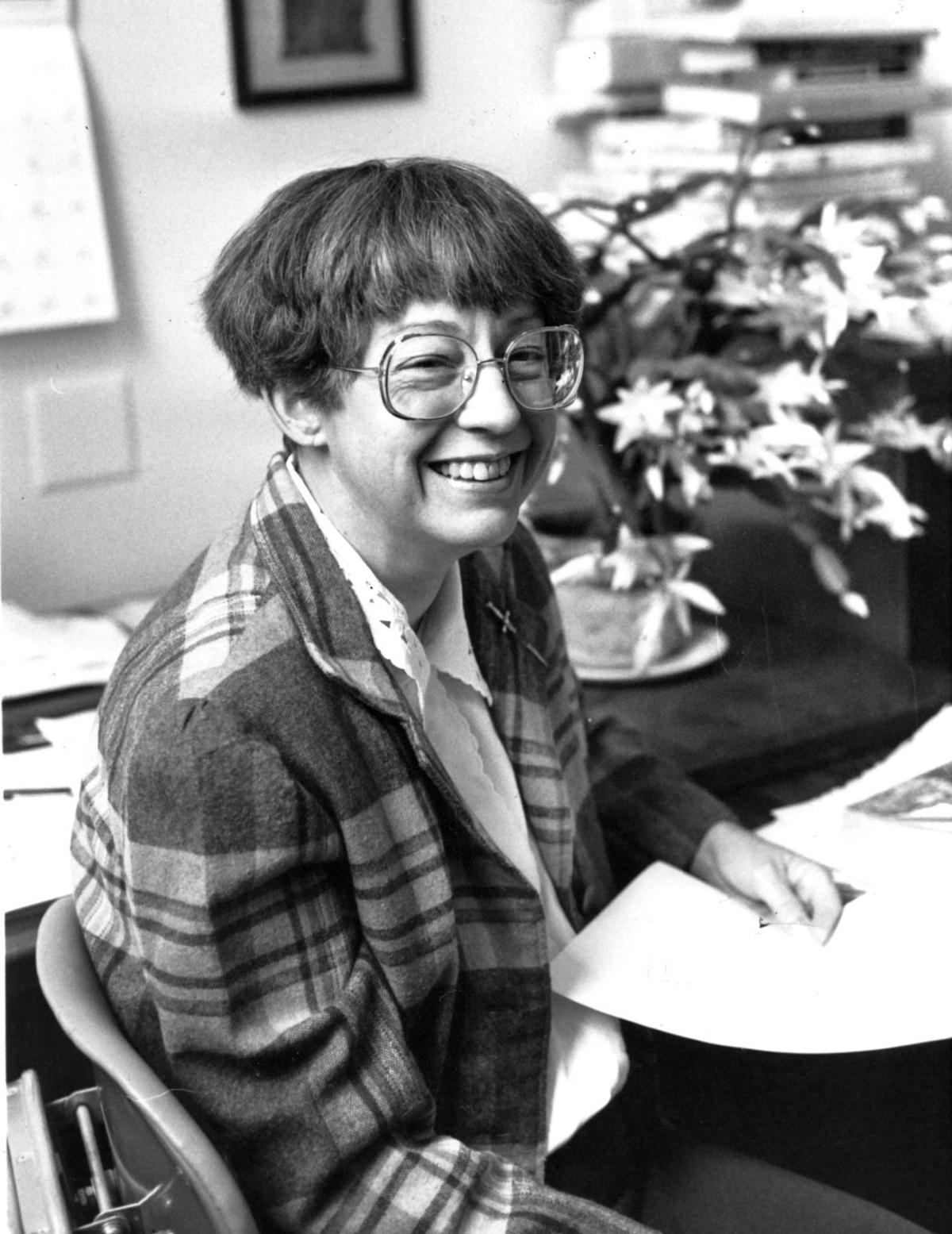 Carol Shilkett in photo taken shortly before her death in 1995.

Carol Shilkett in photo taken shortly before her death in 1995.

Escape takes many forms. One of them certainly is escape into the past.

The late Carol Shilkett embodied, I think, that brand of romanticism, although she was enough of a realist to have called it something quite different. When I knew her she taught the literature of medieval Europe at Alfred University. A brilliant scholar, she was in every sense of the word an exemplar of what a university either is or should be.

Carol Shilkett died in 1995. She was 48 and lived in Hornell, where she was a communicant of St. Ann’s Church. She never married.

What follows is the profile of Shilkett I wrote 40 years ago, when I worked as director of the Alfred University news bureau.

She has a friendly, open face, with close-cropped dark hair, and she wears a wide smile, bright Scotch plaid and oversized contemporary glasses, hardly the getup, you might say, of a woman who in her work and thinking has turned away from cultural modernism and lives her life entirely devoted to the study of antiquity.

But I see no contradiction. Carol Shilkett is a teacher, not an apologist for current trends. Her classroom is a lecture hall at Alfred University. And her subject, four to twelve centuries removed from the present day, is the medieval literature of Bede and Chaucer. Some critics dismiss what she does as the most irrelevant field of scholarship in higher education.

“Nonsense,” scoffs Shilkett. “There’s a good linguistic reason for going back to the Middle Ages. Our language, as well as our culture, developed from that time.”

For Shilkett, medieval studies have, or should have, a central place in a university curriculum. History, politics, psychology, the development of language and the growth of the storyteller’s art are some of the themes she identifies in medieval poetry and prose.

“They tend to pull what otherwise might seem to be a remote field of study into focus in the modern university,” she declares. “They really are what a liberal arts education is about. We want to turn out a student who has some familiarity with these disciplines, who can acquire some sense of how he or she can fit into the modern world after leaving the ivory tower.”

Shilkett is a native Californian who earned her doctorate in English at Michigan State University. She has taught at Alfred since 1972, for the past few years with the rank of associate professor of English.

Her courses include a survey of English literature from the 8th-century Anglo-Saxon poem Beowulf to Spencer’s 16th-century Faerie Queene. Her special area of scholarship is Geoffrey Chaucer, whose bawdy, brawling classic, The Canterbury Tales, offers a rare glimpse of life and society in 14th-century England.

Shilkett teaches medieval drama and French romances of chivalry and courtly love. From time to time she has lectured on Dante, the 14th-century Italian poet. She has also introduced students to the ancient liturgical music known as Gregorian chant.

As she speaks of the literature of antiquity, Shilkett’s hands lend emphasis to the points she makes. In response to a visitor’s question, she notes that many of her students see the Middle Ages in nostalgic terms. And although she herself denies harboring that particular attitude, there seems little room in her historical lexicon for the squalor, disease and brutality of the age.

“There’s something glamorous about knights and jousting,” she says. “It was a time when the bad guys all wore black hats. There was little confusion of roles. There was a simplicity about it that appeals to people today. There was a certainty about religion—people knew what they believed in.”

“But once you come to medieval literature,” she adds, “you find something else, something disconcertingly similar to modern life. This is one of the relevant parts of it. Students discover that the stereotypes they have of knights and ladies are not necessarily the people they find in the literature.”

Put another way, Shilkett suggests, the subjects studied are the eternal problems of thought, conduct and social organization.

The work is demanding. To read Chaucer, her students must first come to grips with the English language as written and spoken before 1400. It differs from modern English primarily in spelling and syntax. For example, The Canterbury Tales open with the lines:

The droughte of March hat perced to the roote”

“Which means when April’s sweet showers water the dry roots of March,” says Shilkett. “Students don’t think it’s possible to get the hang of it in the first or second day. But by day five they’re doing fine.”

Shilkett, who describes herself as a traditional Catholic, says her knowledge of theology is an adjunct to her teaching because so much of medieval literature has a religious base. She cites Dante’s Divine Comedy as a work of transcendent power and importance, but one that cannot be understood “without some sense of theology. To teach it without that background would be almost impossible.”

To students like Polly Harasack, a senior English major from Orchard Park, Shilkett’s teaching style is characterized by a bubbling enthusiasm for her subject. The past is a presence in the classroom, Harasack says. Indeed, Shilkett herself confesses little interest in contemporary literature. Her world is bound by the legend and reality of Camelot.

“I fell into medieval studies by accident,” Shilkett says. “I loved it and have been there ever since.”

(Alan Littell is a longtime contributor to the Olean Times Herald. He lives in Alfred.)