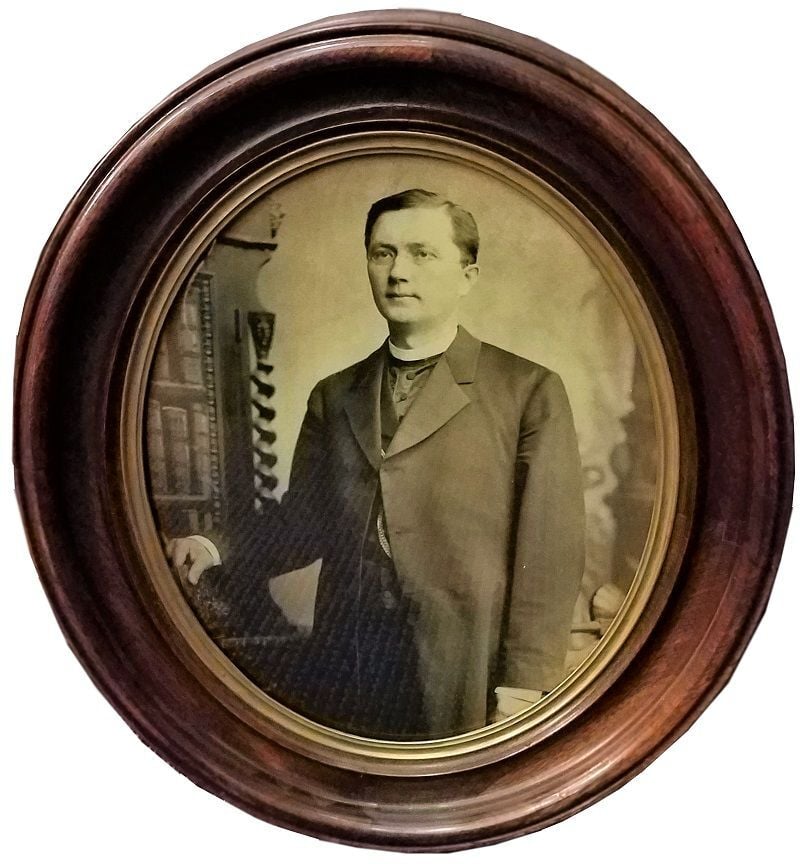 LEFT: Historic window commemorating the 50th anniversary of the Saint Mary of the Angels parish in the Diocese of Buffalo.

LEFT: Historic window commemorating the 50th anniversary of the Saint Mary of the Angels parish in the Diocese of Buffalo.

This week, the Olean Catholic community is celebrating the 145th anniversary of the appointment of its first resident pastor, the Rev. John J. Hamel, and the establishment of Olean’s first Roman Catholic parish, Saint Mary of the Angels.

To celebrate, all are invited to two events at the Basilica of St. Mary of the Angels, 202 S. Union St., today and Sunday, marking the historic occasion on these dates in 1876.

Since 1912, parishioners at the basilica have made a special occasion of Hamel’s arrival. Such was his influence serving in the Olean community for 36 years, his body is interred in the basilica crypt, a rare blessing for any parish community.

“He was an integral part of the development of the city of Olean during an era of significant increase in the immigrant population which was predominately Catholic,” says Jennifer Kane, author of “A Place Set Apart,” which chronicles Hamel’s life and ministry in Olean. “He was beloved by the entire city, not just among his parishioners.”

On Nov. 24, 1876, Bishop Stephen Vincent Ryan established Saint Mary of the Angels as a parish in the Diocese of Buffalo and assigned Hamel, a 26-year-old alumnus of St. Bonaventure’s College, as its first resident pastor.

Hamel arrived in Olean the day before Thanksgiving on Nov. 29 to lead what the bishop called “the church of Olean” and remained there until his death at 62 in 1912.

In 1926, the parish memorialized the 50th anniversary of Hamel’s arrival in Olean with a Mass celebrated by Cardinal Dougherty of Philadelphia with Father Nelson Baker in attendance. In the west tower stairwell, the parish installed a window depicting Hamel, the old church building and the bishop’s document assigning him to Olean.

While formal remembrances waned by the 1960s, the parish resumed the memorial celebrations honoring Hamel in 2012.

A tour of the basilica hosted by Kane is today at 11 a.m. followed by a Solemn Mass of Thanksgiving at 12:15 p.m.

Then, at 1 p.m., there will be a Prayer of Thanksgiving and Renewal in the basilica crypt where Hamel is interred. This is followed by light refreshments in the parish’s Bradley Centennial Hall. The expanded third edition of “A Place Set Apart,” with additional stories and photos, will also be released.

On Sunday, in addition to Masses celebrating the First Sunday of Advent, the basilica will host a performance of “God’s Son, My Son,” a one-man play on the life of St. Joseph, at 9:30 a.m. Another tour of the basilica by Kane will be held at noon.

The Rev. John Adams, rector of the Basilica of St. Mary of the Angels and pastor of both the basilica and St. John the Evangelist Church, said he is incorporating the diocesan “Road to Renewal” program into the celebrations to aid in healing for the local Catholic community during these trying times.

“The Church is facing the need for repair and renewal trying to recover from crises, scandal and societal secular influence,” he said. “With faith and resolve from God’s people, we pray and trust in the Lord that the past betrayals, struggles and disappointments will not keep us from our commitment to and mission of Jesus Christ.”