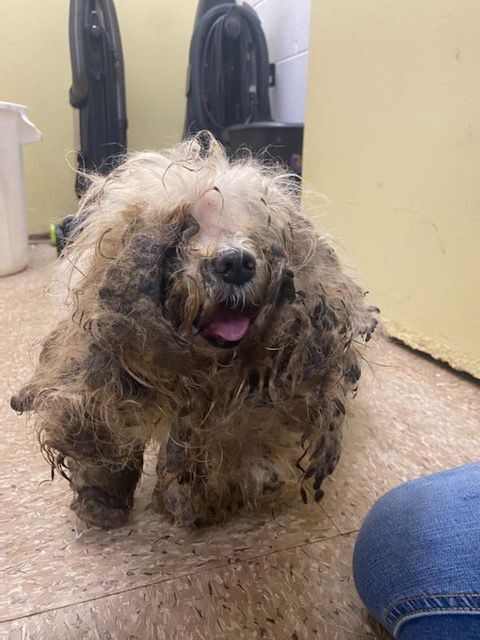 This photo shows Dusty in the condition he was in when found by Olean firefighters. 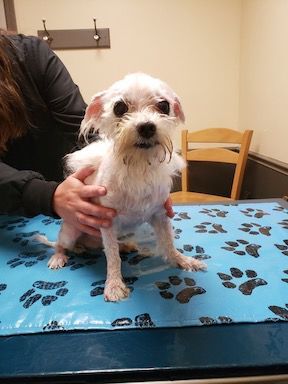 Dusty after a long session with groomers.

This photo shows Dusty in the condition he was in when found by Olean firefighters.

Dusty after a long session with groomers.

Marcia Kelly, a big animal friend and advocate for the SPCA in Cattaraugus County, shares a story of how many people responded to ease the plight of a dog, Dusty.

Dusty was in a home that had a medical emergency and the Olean Fire Department found him Sept. 10 and notified Olean police, who brought Dusty to the SPCA.

The team and volunteers at the SPCA leapt into action. Manager Jason Berube reports that staffers Olivia Ingalls and Rachel Smith knew volunteer Mimi Smith had contacts in the animal care world who could help, and asked her to make some calls while they worked on the dog and comforted him.

Dusty was taken to a groomer, Becky Brockway at Dog Days Salon, who worked on him with Bob Faulkner for more than four hours. Dusty’s hair was matted and stained and his nails so long they curled under his feet.

“We also got him to the Veterinary Center of Cuba and Dr. Amy Mount for vaccines and an exam,” says SPCA volunteer Mimi Smith. “What a day for this lucky little one.”

Gunshot victim thanks medical student who saved him 25 years ago

Mimi then rushed Dusty to a veterinarian in Cuba, who pronounced heart and lungs strong, diagnosed and treated some eye problems, vaccinated Dusty and cleaned his crusted ears.

Now he is feeling much better, but not accustomed to shelter life, so an animal lover offered to foster Dusty and take him home as he recovers from this trauma.

“The general public is always so supportive in situations like this,” Marcia writes. “It makes a huge difference to the staff and volunteers on the front lines knowing that they are being cheered on, with offers of help, and donations sent to cover medical bills, one of the greatest expenses, as so many of the animals who come to the SPCA are in need of minor or major medical care. It’s inspirational to watch the loving care that the animals are given by this team.”

MEANWHILE, the SPCA is hosting a giant garage sale Saturday from 9 a.m. to 5 p.m. and Sunday from 11 a.m. until sold out at the Pleasant Valley Greenhouse and Nursery, 2871 Route 16, thanks to Dan Evans and part of the Route 16 Corridor annual 44-mile garage sale.

The planned SPCA barbecue has been postponed, but there will be others along the route.