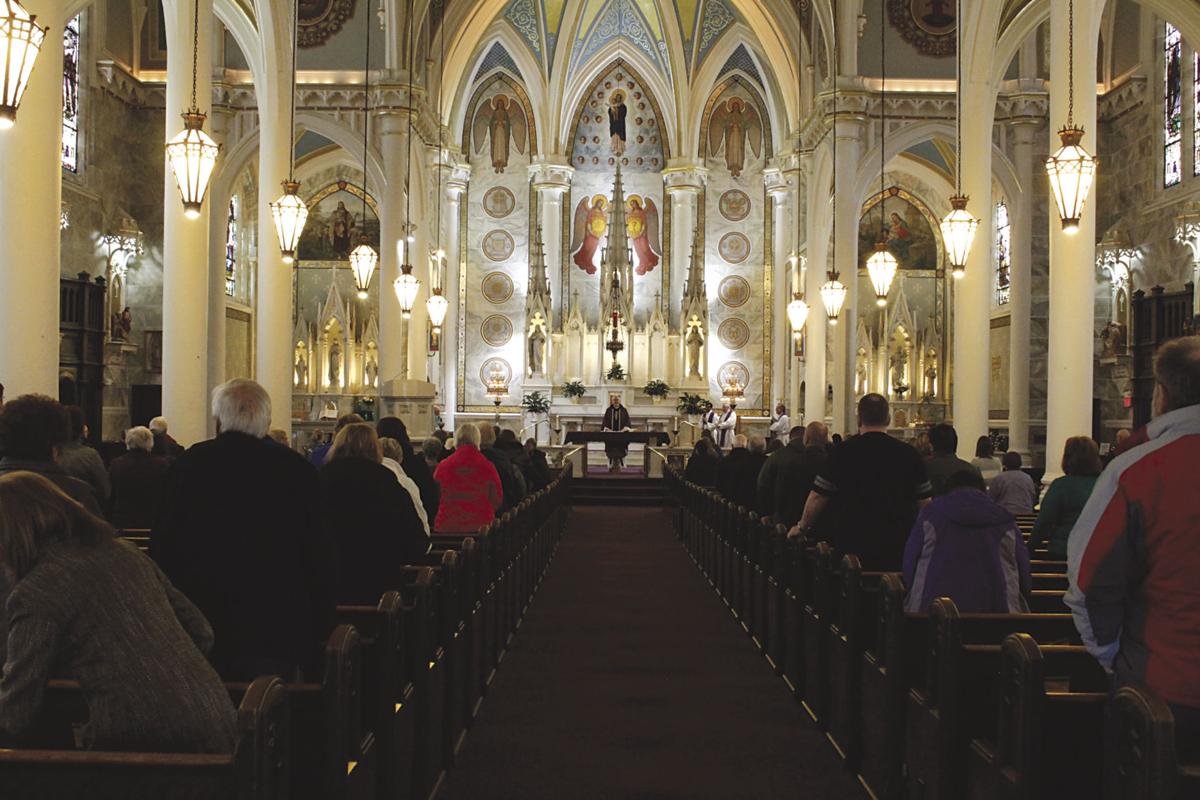 St. Mary of the Angels Church, seen here during Friday afternoon Mass, has been designated a basilica by Pope Francis. The 102-year-old Roman Catholic church has been through a two-year application process to receive the designation, one which only 83 churches in the country have. 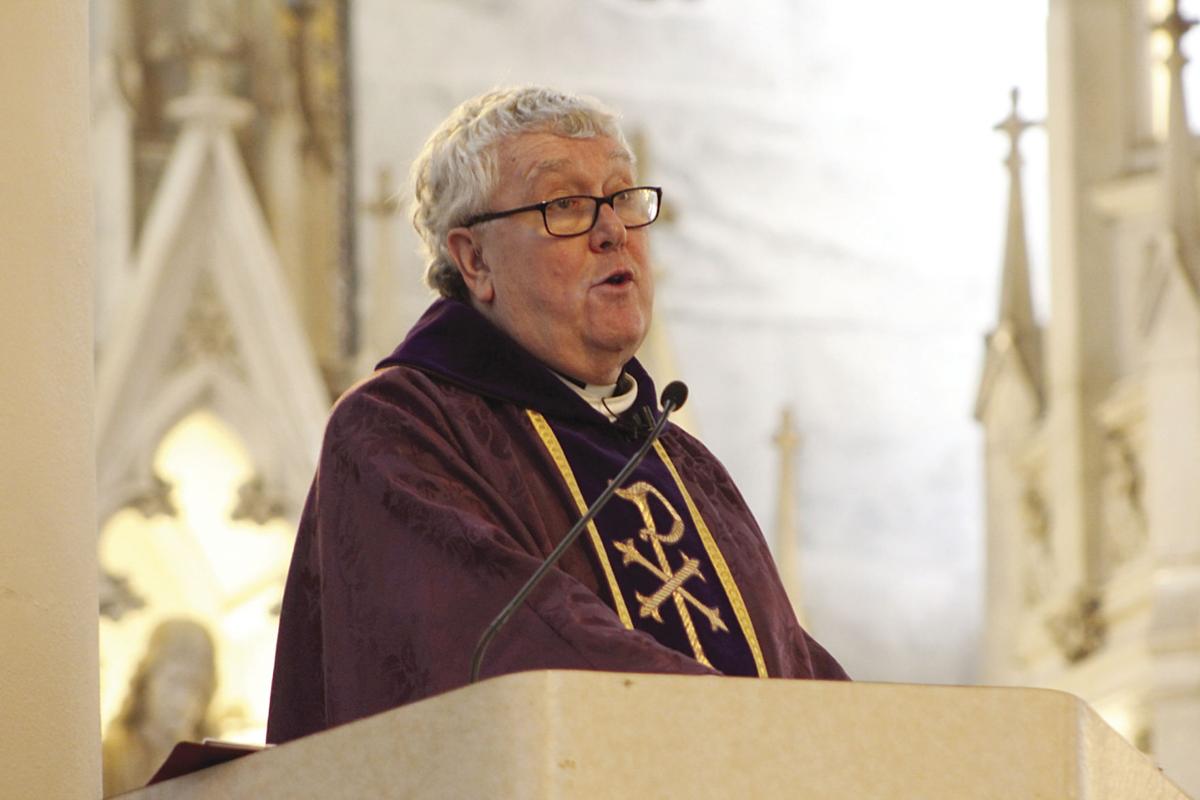 The Rev. Gregory Dobson, pastor of St. Mary of the Angels Church, announces to the congregation the church’s designation as a basilica during Friday afternoon Mass.

St. Mary of the Angels Church, seen here during Friday afternoon Mass, has been designated a basilica by Pope Francis. The 102-year-old Roman Catholic church has been through a two-year application process to receive the designation, one which only 83 churches in the country have.

The Rev. Gregory Dobson, pastor of St. Mary of the Angels Church, announces to the congregation the church’s designation as a basilica during Friday afternoon Mass.

The 102-year-old Roman Catholic church has been designated a basilica by Pope Francis, an honor reserved for churches with significant history, art and architecture, and that only 82 other churches in the country can claim.

The Diocese of Buffalo made the official announcement Friday morning at Our Lady of Victory Basilica in Lackawanna, and the Rev. Gregory Dobson later notified the St. Mary’s congregation during afternoon Mass.

“I’m thrilled for the people of this community to be honored by the Holy Father. To have our church, which is so historic, be recognized on an international level is just absolutely wonderful for them,” said Dobson, St. Mary’s pastor. “It’s an affirmation for what they have been for almost a century and a half, and what we’re going to be in the future.”

St. Mary’s is now the third basilica in the Diocese of Buffalo, along with Our Lady of Victory and Basilica of the National Shrine of Our Lady of Fatima in Lewiston. St. Mary’s and all basilicas outside the four “major” basilicas in Rome are considered “minor” basilicas. There are roughly 1,700 basilicas worldwide, including 83 in the United States.

The designation brings both privileges and responsibilities, including additional celebrations, receiving pilgrims, and having an increased focus on supporting the Pope and recruiting followers. St. Mary’s will also undergo a name change to the Basilica of St. Mary of the Angels.

Friday’s public announcement capped a rigorous, two-year application process that remained confidential outside of a few church leaders. Pope Francis officially signed the decree Feb. 14, and the Diocese of Buffalo and St. Mary’s were notified March 6.

Dobson called it a “relief” to finally tell parishioners.

“(Buffalo Bishop Richard J. Malone) said, ‘Keep it quiet,’ and when the bishop tells me to keep something quiet, I keep it quiet,” Dobson said. “For two years I have not mentioned the word ‘basilica’ in that pulpit because I didn’t want to give anyone a false hope or betray the bishop or anybody.”

The application process began in March 2015 and included a 119 questions, all in Latin, from the Vatican on all aspects of the church’s history.

The more than year-long research process was spearheaded by Jennifer Kane, St. Mary’s communications director. Kane, who is trained in journalism, used the archives of St. Mary’s, the diocese and St. Bonaventure University, as well as the Olean Historical and Preservation Society.

“You have to question everything. I took more of a reporter’s mentality in examining it: Is this true? Can this be verified?” Kane said. “It was a treasure hunt this entire process.”

St. Mary’s was first established in 1852, with its current building constructed in 1915. Famed Catholic priest Nelson Baker, known as Father Baker, blessed St. Mary’s at its opening Mass. According to the diocese, he was so impressed by the church’s neo-Gothic appearance that he commissioned the same architect, Emile Ulrich, to design Our Lady Victory years later.

The church is known for its high, decorated ceilings, as well as its Munich-style stained glass windows that are particularly renowned.

Dr. Karin Krause, a University of Chicago Divinity School professor and art historian who has visited the church, said in a statement that he doesn’t believe any other church in the entire country has windows like St. Mary’s. He noted they’re exceptional for their size and quality.

The basilica designation was solidified after what St. Mary’s officials call the most elaborate restoration in the church’s history, which was completed last spring and part of a $2 million capital campaign. The renovation included custom paint finishes, stenciling, gilding and custom canvas painting from Swiatek Studios in Buffalo.

“It had been whitewashed and colored in a different way, and so we brought in really talented craftsmen and artists who restored it to either the way it did look or the way it might have looked,” Dobson said. “Without the restoration, (the basilica designation) would not have happened.”

Aside from its art and architecture, St. Mary’s also has significant history. Thomas Merton, an influential 20th century Catholic writer who also taught at St. Bonaventure, prayed at St. Mary’s while living in Olean.

News of their church becoming a basilica elicited an emotional response from some St. Mary’s parishioners at Friday Mass.

Mary and Jack Kerner, who have been coming to St. Mary’s since 1968, said it’s a “blessing” to have their church named a basilica. For Mary Kerner, the church’s high ceilings and artwork enhance the spiritual experience.

“Usually we come to Saturday Mass and usually we sit more toward the back and yes, it’s just beautiful to just look around at the windows and everything in here,” she said.

The announcement made Gail Mikolajczyk think of her late husband, Ray. The two attended St. Mary’s together before his death a few years ago, and Mikolajczyk now lights a candle in St. Mary’s for him every week.

“He would just be so happy,” she said, adding that she herself was overwhelmed to learn St. Mary’s is a basilica. “It just blows your mind. I just look at it with such splendor now because when they were redoing it I was watching each step of the way, and now it really looks and feels alive. It’s just beautiful.”

Of St. Mary’s 1,350 families, Mikolajczyk is one of many who donate to the church. Dobson said the church’s basilica designation is a reflection of parishioners who sacrificed over the years for the church, as many of the church’s accessories and renovations have been expensive.

“A lady just came up to me today and said, ‘My grandparents came here and they donated $60 — $10 for each of their children — to the building of this church, and they did that so their kids and their kids would have a nice church to go to,’” Kane said.

Dobson hopes the church’s new designation leads to more visitors and puts Olean “on the map in a different kind of way.”

“Ultimately it will get the name Olean out,” he said. “They said it in the Vatican. … How often has someone said ‘Olean’ at the Vatican?”

There will be a special Mass on June 29 at St. Mary’s when the new title will be celebrated by Malone, other invited bishops and the church community.