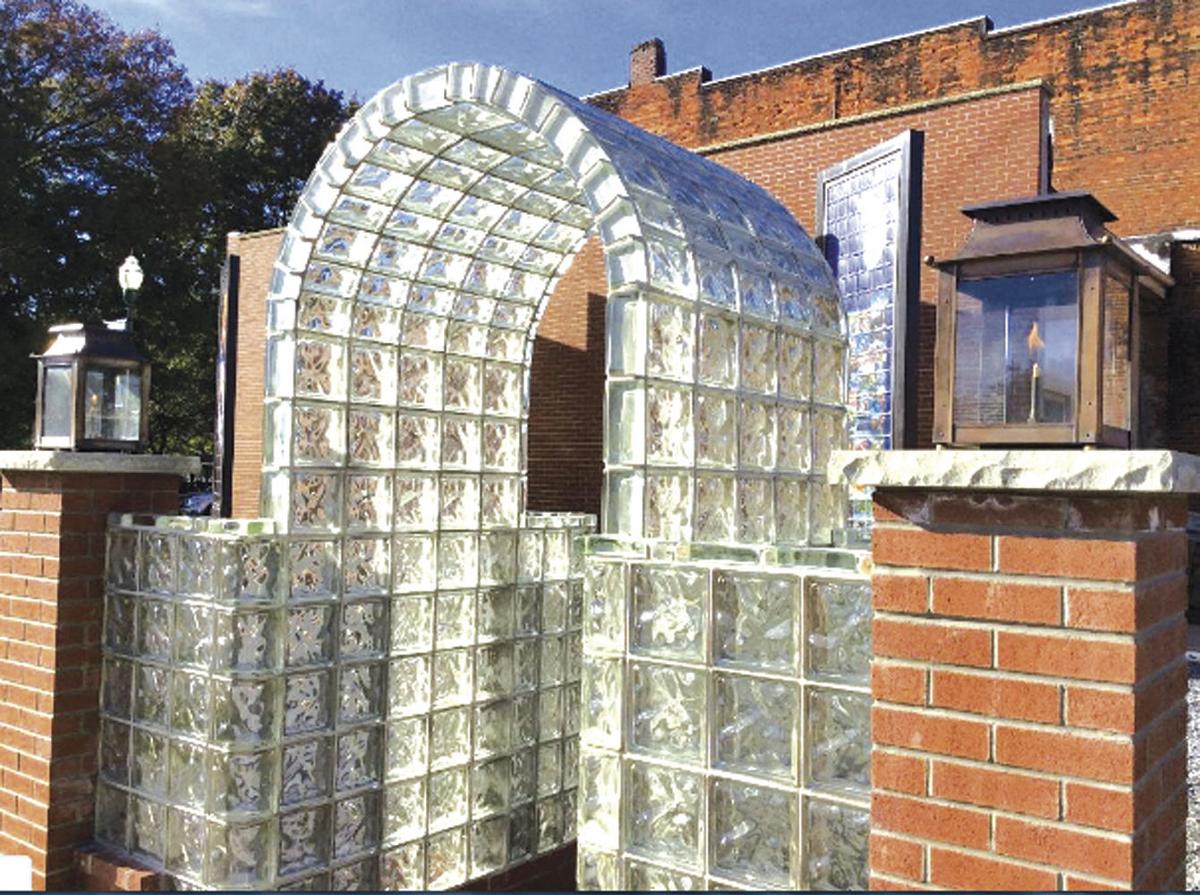 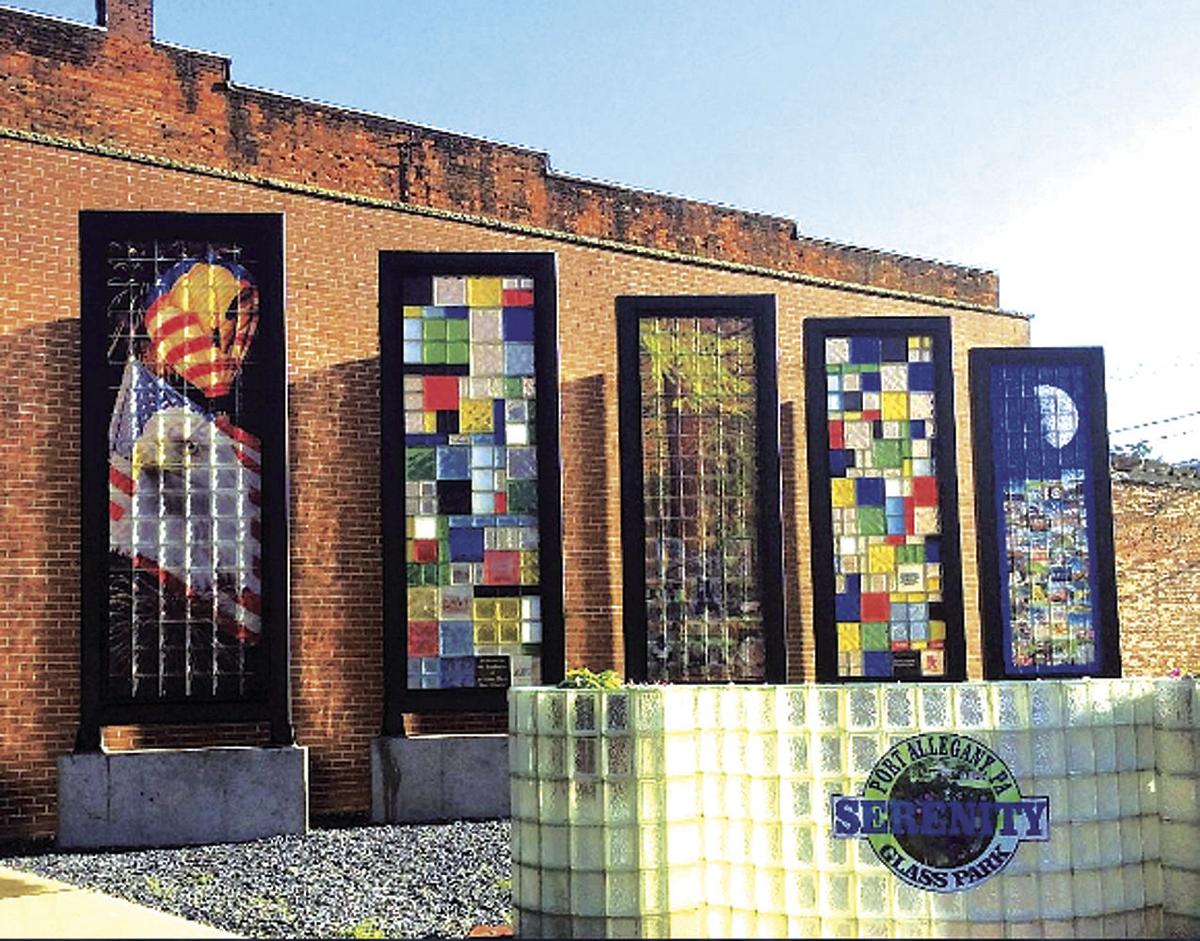 PORT ALLEGANY, Pa. — After a blighted building at the corner of Mill and Main streets was demolished several years ago, borough officials knew it needed to be replaced with something that would serve both as an anchor and attraction for the downtown area.

The end result is the colorful Serenity Glass Park that will be showcased during Dedication Day ceremonies at noon Friday . The public ceremony will include an honor guard, speakers and music by elementary and high school students.

In addition, tours will be provided to the public from 10 a.m. to noon and regional business and industry officials are invited to a Meet and Greet session from 11 a.m. to noon at a hospitality tent.

“The park concept and design is mine,” said Susan Carlson, the architectural designer, artist and chairman of the Serenity Glass Park project. “ … I couldn’t have done it without my incredibly talented and creative fellow directors of the project.”

Carlson said the park also received the support of the community’s glass industry, as well as the county.

“From the beginning we had two powerful partners,” she continued. “McKean County Redevelopment and Housing Authority owns the lot and small building where the park is located. And (the former) Pittsburgh Corning offered their products to build the park.”

Carlson recalls her initial meeting with with Dusti Dennis, executive director of the housing authority, as well as members of the Port Allegany Area Economic Development Corp. and the Main Street Revitalization Corp. to discuss creating a park.

‘My suggestion was a simple park with flowers in glass block planters made with the products manufactured by Pittsburgh Corning located in Port Allegany, our town being known for manufacturing glass products,” she recalled.

With the approval of key leaders of the project, she met with the glass plant manager, Robert Lehman, later that day. That led to a meeting with the vice president of Pittsburgh Corning, who liked Carlson’s conceptual drawings.

“Everyone loved the ideas and the project took off,” Carlson remembered.

The artistic designs, provided by Brenda Merstock-Sawyer, and construction crews headed up by Mick Caulkins, ensured the project would happen.

Hear why this governor is keeping state's mask mandate

Carlson said donations from residents, regional industry and businesses funded the park in its entirety. The funds were augmented through the sales of printed glass blocks that were sold in 34 offices, banks and stores in five counties across Northern Pennsylvania and Southern New York.

“The park became a true regional project,” she remarked. “The glass block sales offered cash flow, but sponsors gave substantial cash, $500 to $10,000, to propel the project to reality. “

She said the names of business and industry sponsors are etched in glass found in the displays.

“We highlight the three primary industries in our park that support families in Port Allegany and our region: natural gas, lumber, and glass products,” Carlson continued. “Without these industries and other businesses our park would not exist. Neither would anything else exist in our communities.”

Carlson said that In addition to the “dazzling glass exhibits” created by glass etchers, Tom Weiser and Diana Covert of Lightwaves Laser Engraving, carved wooden benches were crafted by master carver, Scott Dow of Warren. Others who helped with the park included photographers Bill Potter of Port Allegany and Curt Weinhold of Coudersport, who developed pictorial glass block printed panels.

In addition, Steve Lango of Bradford custom designed and fabricated steel frames that hold the massive panels on their bases. E & M Engineers donated their time to design the bases for the one-ton pictorial panels. Pittsburgh Corning employees also designed and made five colorful planters for the park, and a grand walkway provided the finishing touch to the entire project.

“It is really beautiful and getting more so,” Carlson concluded. “Visitors are discovering it and the feedback is wonderful.”

Linda Devlin, executive director of the Allegheny National Visitors Bureau, said the park is expected to serve as a destination point for tourists in the area. Devlin encouraged Carlson on the project in the beginning and is now lending her support by serving as host of Dedication Day along with the Port Allegany Area Economic Development Corp.

“Serenity Glass Park is an artistic gem, and I believe the park is a one-of-a-kind attraction visitors will travel to see,” Devlin said. “With Port Allegany’s longtime history of glass block production, the park builds on the authentic and true character of this community.”