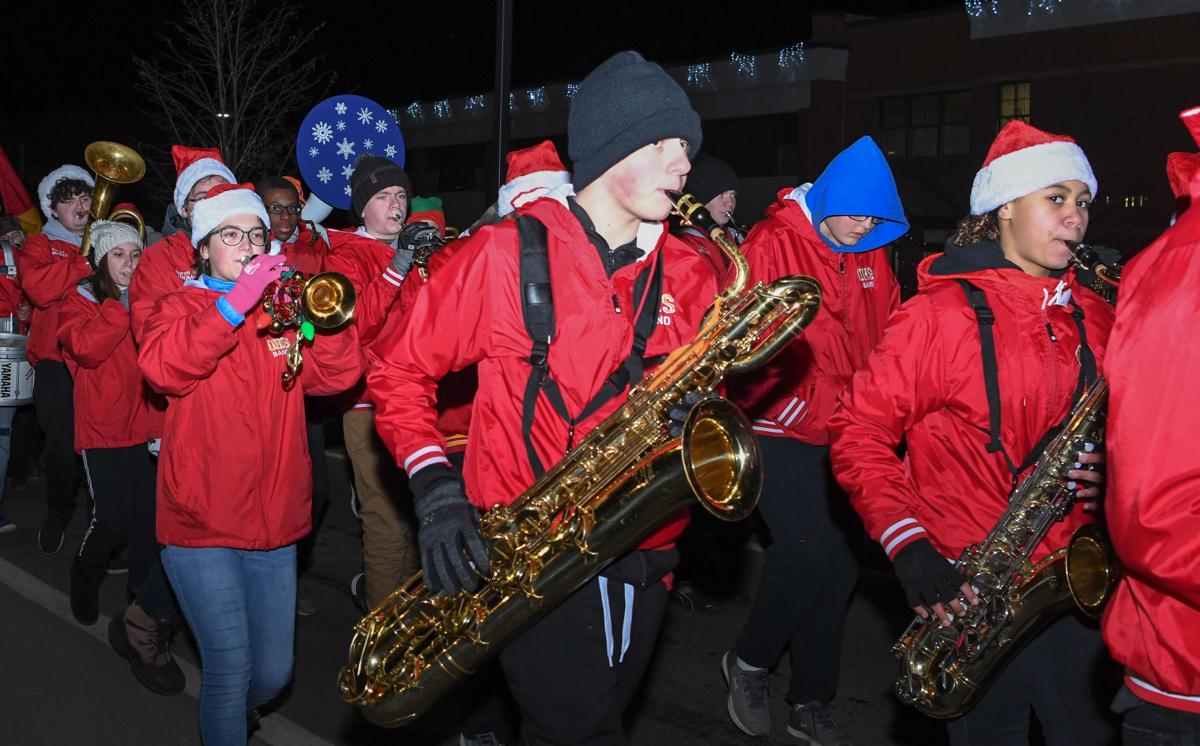 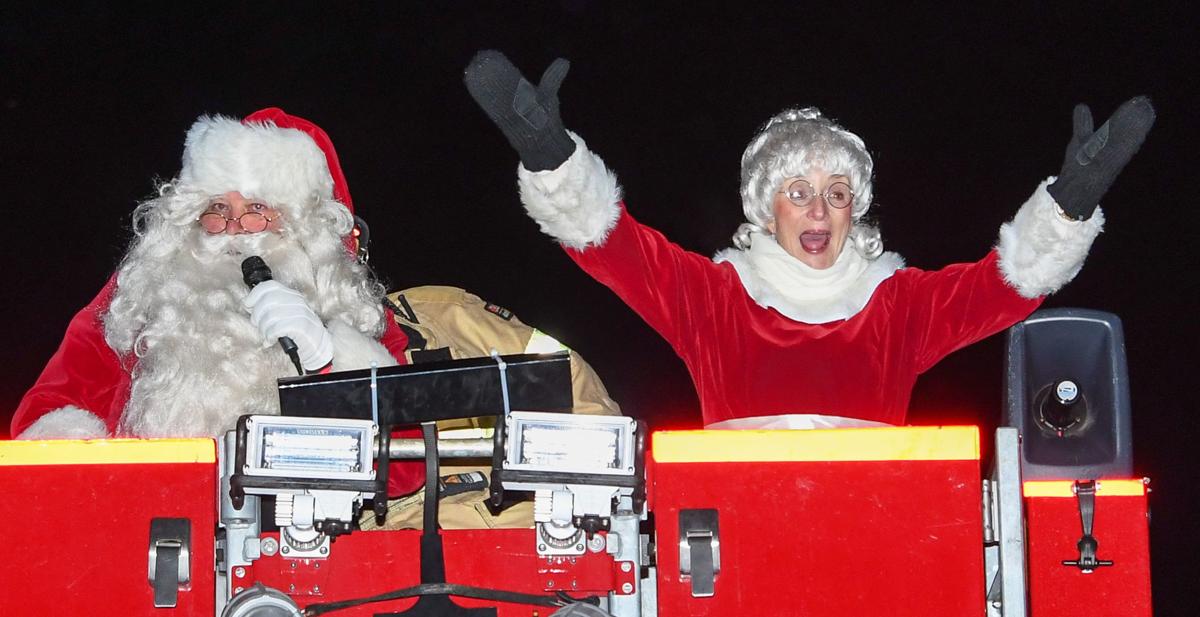 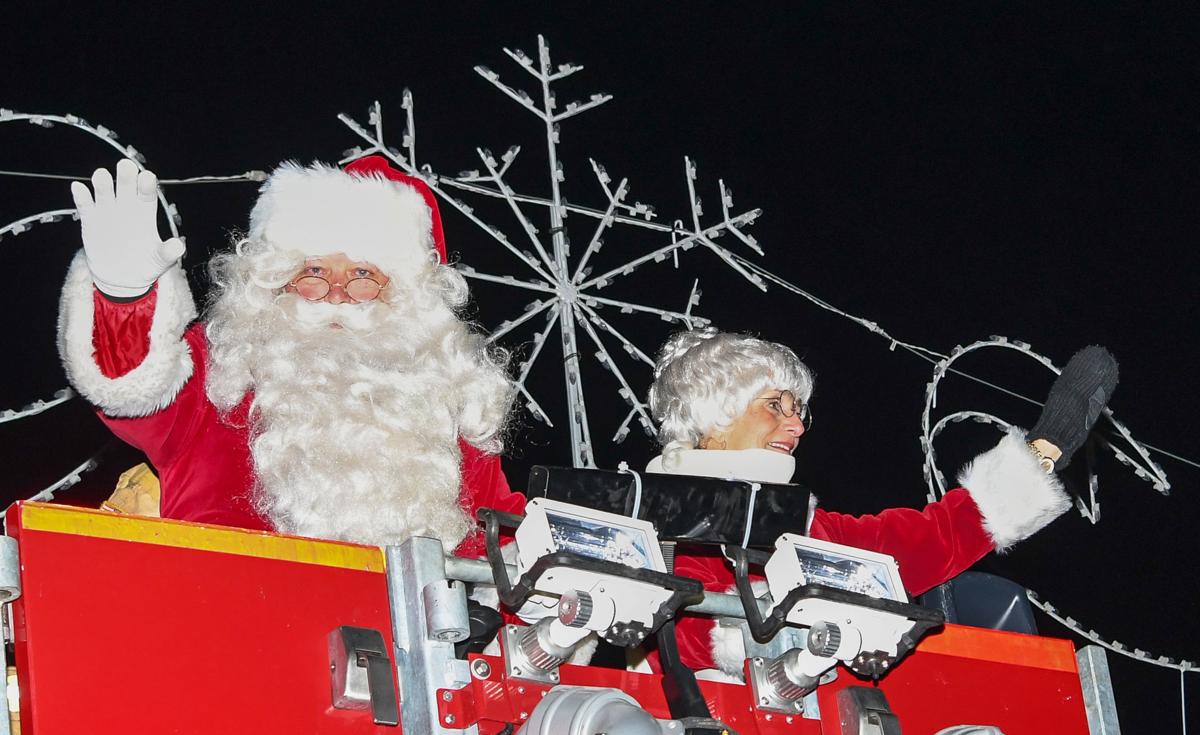 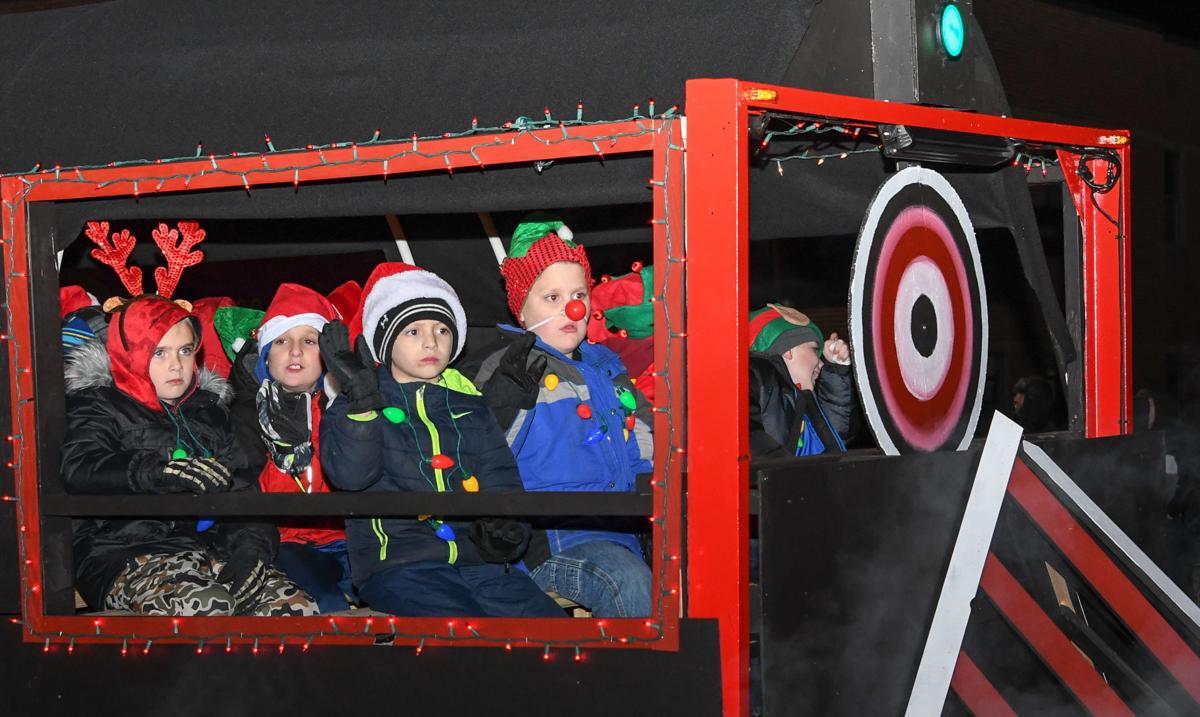 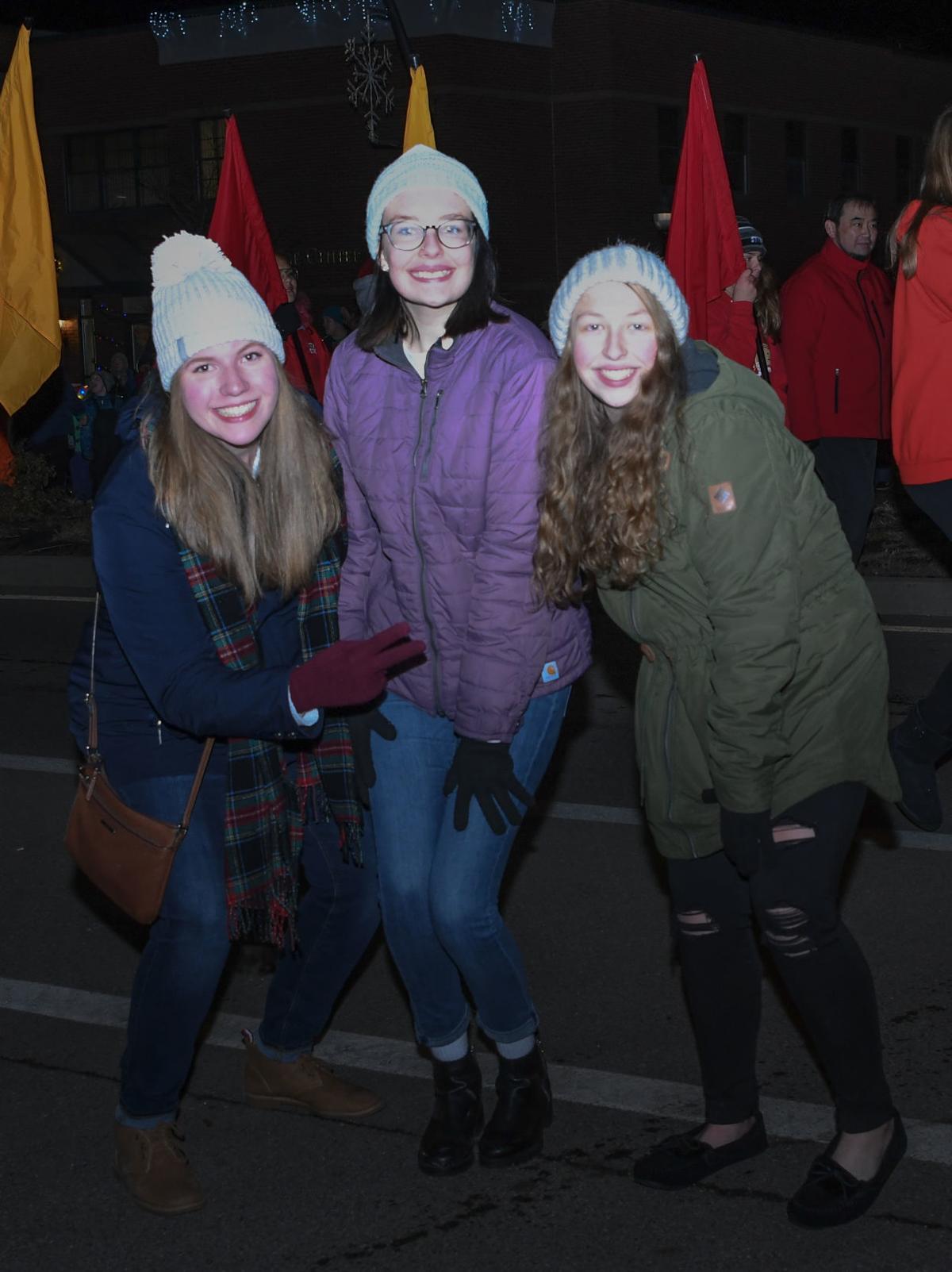 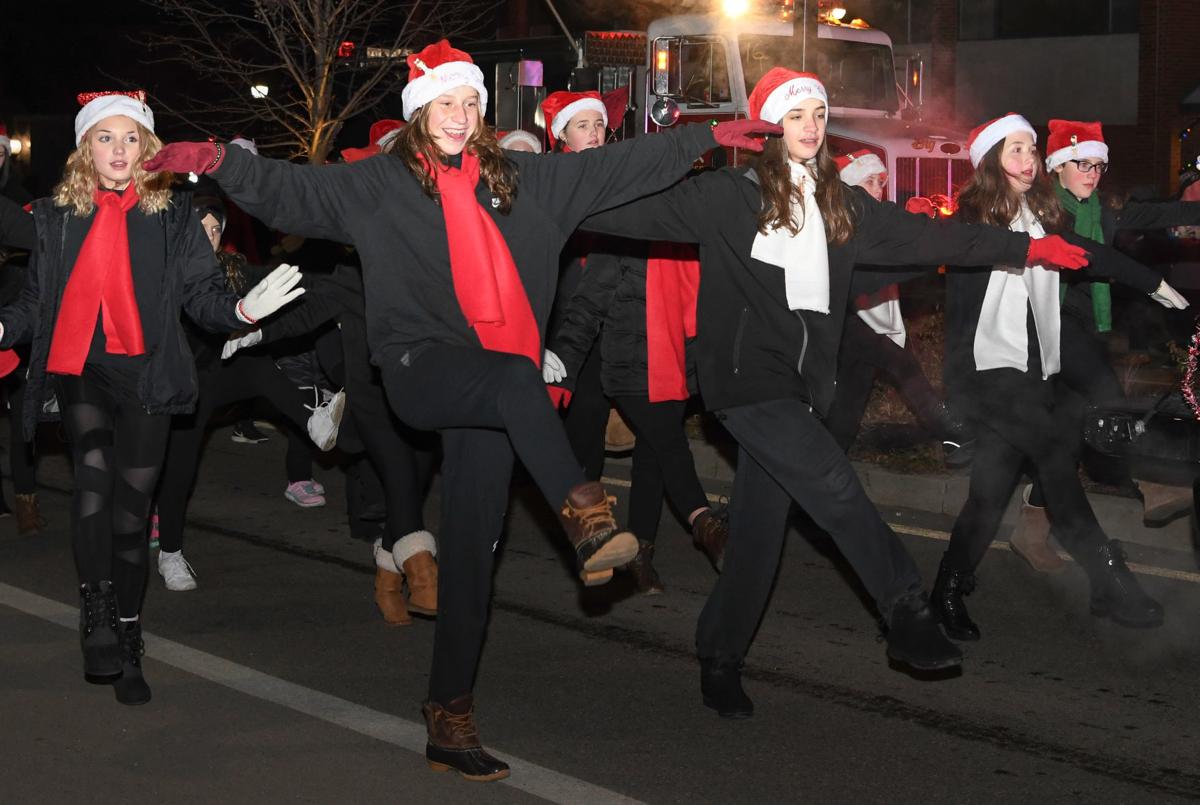 OLEAN — Celebrating the holiday season, the Olean Area Chamber of Commerce showed off the 34th Santa Claus Lane parade by being bigger and brighter than ever.

Visitors who lined both sides of North Union Street near Delaware Avenue before the 7 p.m. parade kickoff, were entertained right from the start of the parade, when the energetic Downbeat Percussion, local performers at Buffalo Bills games and other venues, started the night's activities off.

With parading of their own, the band kept things lively by mingling with the crowd while continuing to play.

WPIG-FM emceed the parade, announcing the lineup from their booth near the intersection of Union and State Streets.

Mercy Flight of Western New York officially led the parade with a flyover, shining a spotlight along the parade route.

That parade route included “52 units and more than 846 adults and children,” said Meme Yanetsko, chief operating officer for the chamber. “More than 2,200 people watched the parade go down both sides of the street.

“The greater Olean area is a well-diversified community and as such, people from all walks of life and religion attended the parade to celebrate the gifts and graces of the holiday seasons,” Yanetsko said. “It is truly a night when the community comes together.”

Of course, the youngsters came together to see Santa, the usual big draw for the kids lining North Union Street. They had put a lot of thought into what they were going to ask him for this year.

Tayvon Johnson, 5, was there with his mom and brothers and was thinking big — he was asking Santa for a car. Steven Ertell, 8, was hoping for a Fortnight Nerf gun to play with while the heart of his brother, Izick, 10, was set on a white husky he would name Buttercup.

Older brother, Derrick Kump, 18, said he was looking forward to the whole parade as having recently moved to Olean from Wellsville, it was his first time there. The boy’s mom, Alicia, said she already got she wanted for Christmas — all her kids together.

Santa and Mrs. Santa rode in the parade in their typical style until they reached Lincoln Park at the end of the parade. There they had the honor of lighting the thousands of LED lights that bathed North Union Street in stars and snowflakes and illuminated the tree at Union and State.

“The embellishments of the four snowflakes, eight holiday stars and four more feet to the panel holiday tree, to make it 29 feet including star, in the main roundabout were a GREAT ADDITION to Santa Claus Lane,” Yanetsko said. “The weather was a bit cold, but was great for watching the parade.”

Santa and his Mrs. had a new home to warm up in this year at the end of the parade, as their old home was torn down as part of the Lincoln Square project this summer. The structure, which is all seasonal and all purpose, replaces the Claus’ home constructed 15 years ago. With two doors, the house proved Friday to be a much more efficient way for youngsters to visit with Santa Claus.

Excited to see Santa was Rylee Dahill, 3, of Cuba and her brother Bryce, 6, were busy getting ready to watch the parade with parents Ashley and Jeff.

“The helicopter always takes off without us ... and the fire trucks are boring,” Rylee Dahill lamented, although she perked up as she remembered that Santa was going to bring her a TV this year, she was sure of it.

Brother and sister agreed — Bryce wants one too.