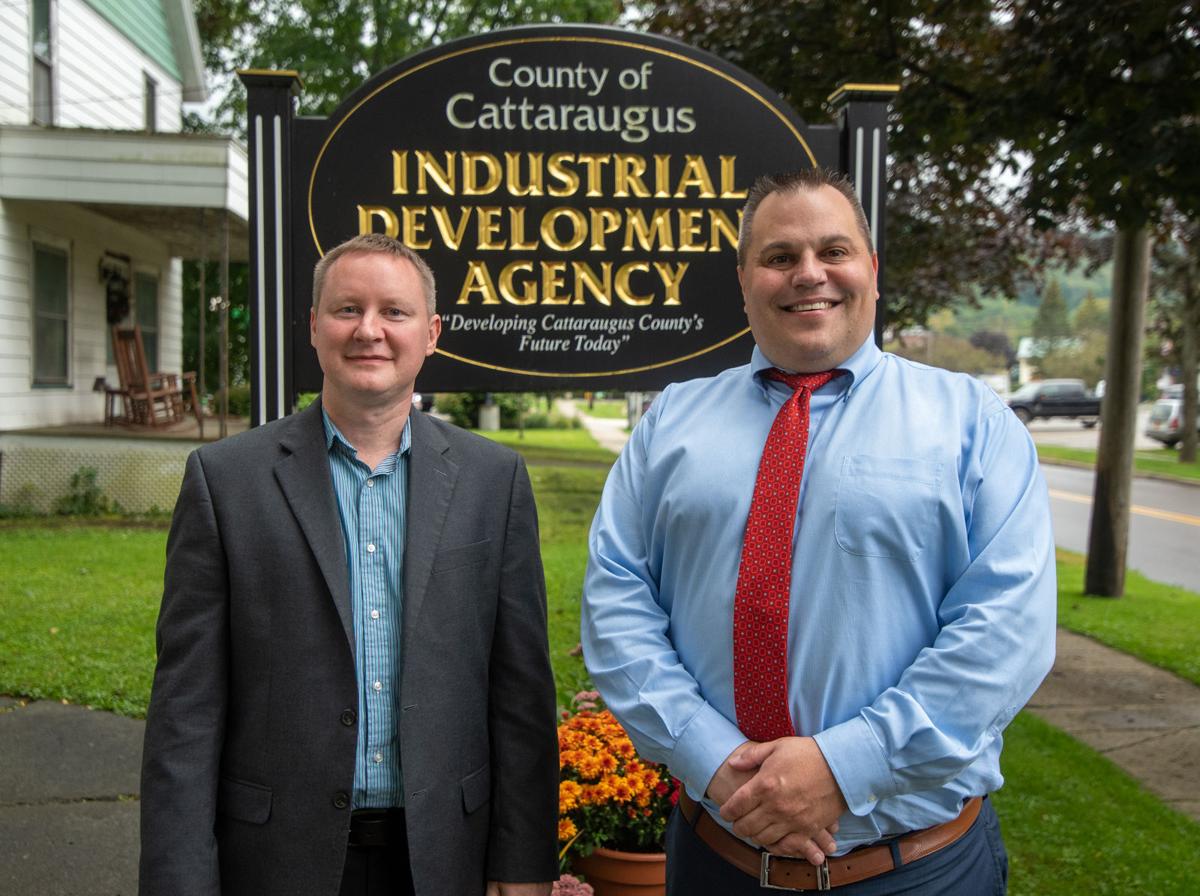 Matt Wilkinson (left), vice president of technology and business development at Great Lakes Cheese, is shown with Cattaraugus County Industrial Development Agency Executive Director Corey Wiktor on Wednesday in Ellicottville. The CCIDA approved a payment in lieu of taxes agreement Wednesday, with GLC announcing shortly thereafter it has chosen a site in the towns of Franklinville and Farmersville for a $505 million cheese manufacturing facility. 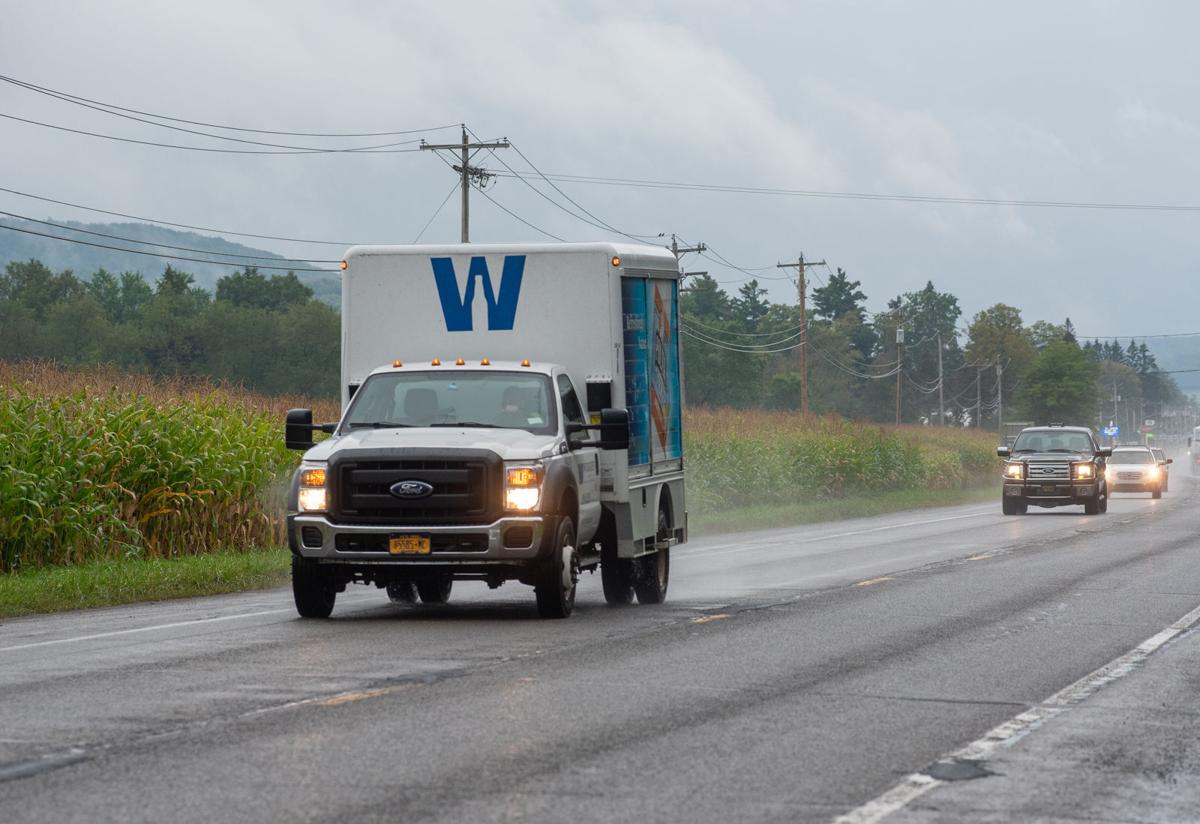 ABOVE: Vehicles drive past a corn field on Route 16 north of Franklinville. The field is the chosen site for a $505 million Great Lakes Cheese manufacturing plant, company officials announced Wednesday, with a plan to break ground in the spring for a 2025 opening.

Matt Wilkinson (left), vice president of technology and business development at Great Lakes Cheese, is shown with Cattaraugus County Industrial Development Agency Executive Director Corey Wiktor on Wednesday in Ellicottville. The CCIDA approved a payment in lieu of taxes agreement Wednesday, with GLC announcing shortly thereafter it has chosen a site in the towns of Franklinville and Farmersville for a $505 million cheese manufacturing facility.

ABOVE: Vehicles drive past a corn field on Route 16 north of Franklinville. The field is the chosen site for a $505 million Great Lakes Cheese manufacturing plant, company officials announced Wednesday, with a plan to break ground in the spring for a 2025 opening.

FRANKLINVILLE — With tax breaks, commitments to buy land and millions in aid for infrastructure, a $505 million cheese plant north of the village is expected to break ground in the spring.

Great Lakes Cheese Co. announced Wednesday that a new 500,000-square-foot site in the towns of Franklinville and Farmersville should be ready to occupy in early 2025, offering jobs to the 226 workers at the current Cuba site as well as adding 200 more.

“Our employee-owners are our greatest asset,” said owner Kurt Epprecht in a press release. “The Epprecht family and Board of Directors are thrilled to have found the location and community needed to support such a major investment in nearby Franklinville. We look forward to building one of the country’s premier cheese manufacturing and packaging facilities for our current employee-owners and the hundreds who will join the Great Lakes Cheese Family.”

Matt Wilkinson, vice president of technology and business development at GLC, told the Times Herald that three permits are outstanding and the actual purchase of property are the biggest requirements left to getting the project off the ground.

“All the pieces that are in our control are addressed,” he said, noting a historical survey for the state Department of Environmental Conservation and State Historic Preservation Office and air and water permits with the DEC are still needed before site work can begin.

“As long as DEC is able to address these permit issues, it is our chosen site,” Wilkinsons said.

He added GLC officials have recently met with DEC and SHPO officials in Albany to state their case for the plant. Coming away from the meetings, “we feel we have their support,” he said.

All other remaining steps, such as securing workers to staff the facility more than three years from now, as well as infrastructure upgrades, have a clear path and are manageable.

“It takes a lot of work to get a site that big ready,” Wilkinson added.

The company has already contacted the Franklinville Central School District about job opportunities for future graduates, and the firm plans to work with area colleges to ensure trained workers are available for the various posts when the plant becomes operational.

The announcement was publicized in a press release just minutes after the Cattaraugus County Industrial Development Agency approved a payment in lieu of taxes agreement with the company.

Corey Wiktor, executive director of the county IDA, said the numbers sound very generous, but the county and communities will receive far more benefit from the site while under development and operation than it does currently as a cornfield.

Not only will it provide steady manufacturing jobs — with hundreds expected to commute from neighboring communities — but Wiktor noted the construction will bring in hundreds of temporary workers who will need somewhere to eat lunch or stay in the community, spending their paychecks in the Franklinville area.

It is estimated by IDA and company officials that construction will generate $393 million worth of goods and services, and almost $1 billion in goods and services from the project’s operation during the P.I.L.O.T. It is estimated the plant will be able to take in 4 million gallons of milk a day for cheese production, supporting 600 agricultural jobs in the region.

The project is the largest in the company’s history, as well as the largest single private project in the county’s history, Wiktor noted. The only project that cost more is the federal government-funded nuclear waste cleanup at the West Valley Demonstration Project with an estimated $5 billion price tag.

The announcement came a week after Cattaraugus County lawmakers approved a $5.8 million allocation to improve municipal water and sewer lines to the site. County lawmakers had previously approved $400,000 for site and traffic studies.

The county is also assisting with a Community Development Block Grant, seeking federal money to help with the project. A hearing on the grant is set for Sept. 22.

The project has been in the works for three years, but was originally slated for a site closer to the current facility.

Allegany County Industrial Development Agency officials were approached in 2018 about a new site for the plant, with a corn field in Belvidere chosen due to its proximity to a new water line and Interstate 86.

ACIDA officials approached the landowner, but negotiations broke down over price. After beginning eminent domain proceedings — New York is one of the few states to allow eminent domain to be used for private enterprises — and public backlash, ACIDA officials announced in June that GLC was no longer pursuing the site.

After considering a site in LeRoy but declining to pursue it further, GLC was offered the land at the border of the towns of Franklinville and Farmersville by its owner, a town of Freedom farmer.

With the new construction seeming almost certain, company officials announced they have no concrete plans for the current site south of Cuba, but are still looking for potential users. Wilkinson said he is in talks with town officials to take it over as a backup plan to finding a private user for the site.

“If they want the building, assuming we don’t have any interest in the building,” he said, noting that the town is not obligated to take it over. “If there is no interest, we will demolish it.”

Various state officials offered words of congratulations for the move.

“Today’s announcement by Great Lakes Cheese company represents a historic moment for this local employer, as well as for our region, residents and farmers,” they said. “It is the culmination of months of negotiations and collaboration, as we all worked together towards our common goal of keeping this legacy company in the Southern Tier to ensure GLC’s employee owners and dairy suppliers could continue to be part of this exciting new chapter for the company.

Borrello and Giglio said the project faced many hurdles that could have derailed it, but the Epprecht family was dedicated to ensure the employees, families and farmers connected to GLC would be served by the project going foward.

“That ‘people first’ commitment sets GLC apart and is undoubtedly the key to their success,” the Southern Tier lawmakers said.

They called the new plant a “game-changer” for Cattaraugus County and expressed thanks to state and local officials they worked with over the past few months to achieve “this extraordinary outcome” that will benefit the region for “generations to come.”

Kevin Younis, chief operating officer at Empire State Development, said half-billion-dollar investment reflects GLC’s commitment to growth in New York state and a recognition of a talented workforce as key to its success.

“As New York state builds back, this investment in Franklinville will have an impressive impact on the region’s economic growth and stability,” Younis said.

“Congratulations to Great Lakes Cheese on their growth in Cattaraugus County.”