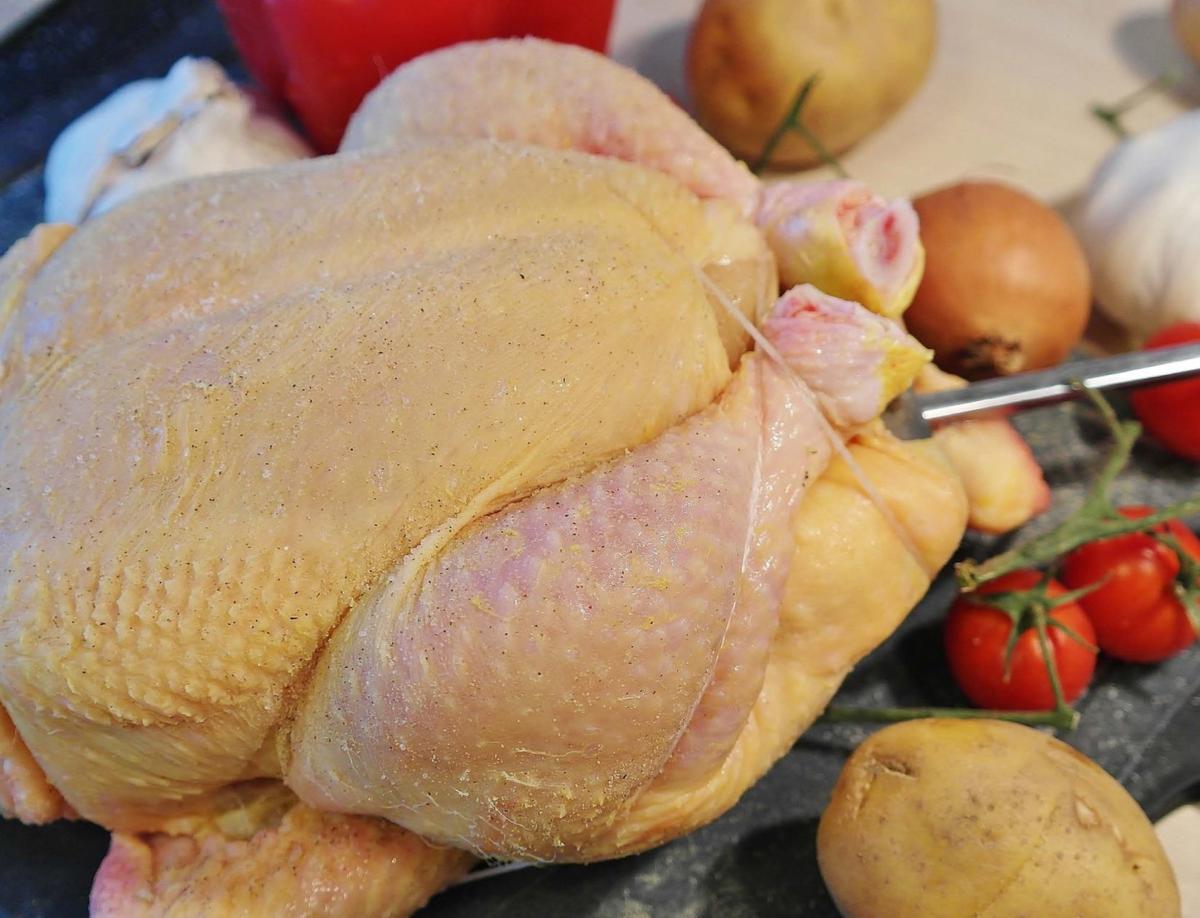 Amy Barkley, Cornell Cooperative Extension livestock and beginning farm specialist, shares some of the history of modern chicken farming and what kinds of chickens you can find on Southwest New York farms. 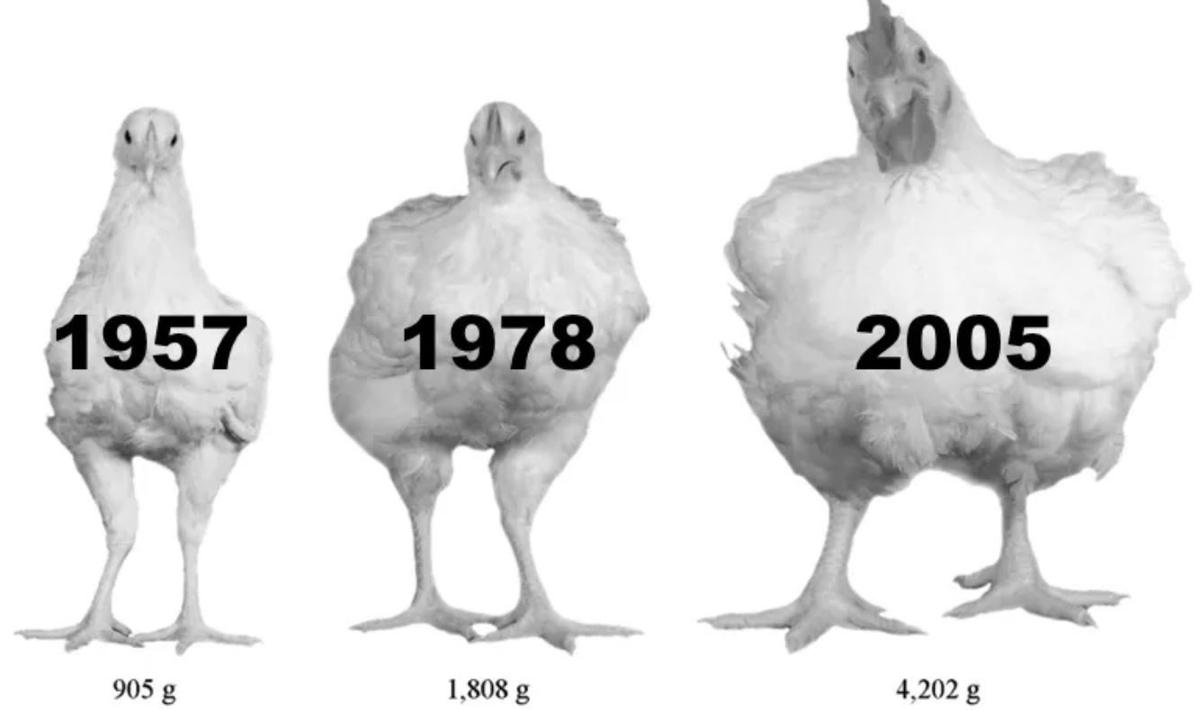 The chickens pictured here are prior to and following strong genetic selection that resulted from the “Chicken of Tomorrow” contest.

Amy Barkley, Cornell Cooperative Extension livestock and beginning farm specialist, shares some of the history of modern chicken farming and what kinds of chickens you can find on Southwest New York farms.

The chickens pictured here are prior to and following strong genetic selection that resulted from the “Chicken of Tomorrow” contest.

It’s the height of chicken barbecue season and local churches, fire departments, organizations and farms are all sharing in the tradition of slow-roasting half birds over an open charcoal pit, fixed with sides such as rolls, salads and baked beans.

At home, we’re firing up the grill and cooking leg quarters, drumsticks and breasts, typically marinated or slathered in a rich, sweet sauce.

Chicken is a summer staple — but have you ever stopped to think of where your bird comes from? Nearly 20% of farms in the region raise meat chickens (broilers), and these producers have harnessed modern science to preserve their farming tradition.

Farmers are working with great care to produce high-quality chicken for us to enjoy. Baby chicks arrive at farms when they are between 24 and 72 hours old. They are placed in warm barns or under heat lamps, where they are provided with fresh water and a balanced feed to meet their nutritional needs. These birds are raised to between 5 and 8 weeks of age, at which point they will weigh between 3.5 and 6 pounds. While the growth rate of these birds is remarkable, it is not done with any hormones or steroids, which have been illegal to use in chicken production since the 1950s.

The history behind these chickens’ ability to grow so well is tied to their genetics and a contest called “The Chicken of Tomorrow.”

Prior to this contest announcement in 1944, farms producing meat chickens were raising dual-purpose breeds — those whose females (hens) are good egg layers and males (roosters) are suitable, but not ideal, meat birds. The meat on these birds was sometimes tough and stringy since the birds foraged on the homestead or farm and were older in age when they made it to the soup pot.

Furthermore, there wasn’t a whole lot of meat on one bird. After World War II, the U.S. Department of Agriculture and A&P supermarkets realized the potential to develop a better meat bird and set forth the contest. Contest rules were simple: every farm would raise their own genetic line of meat-producing bird, send the eggs to a centralized location to hatch and rear the offspring, and then the birds would be processed, measured and taste-tested.

State, regional and national contests ran from 1946-48. The national contest culminated with 2,000 birds from various farms across the country that were evaluated on criteria including skin color, meat texture, overall meatiness, feathering and the amount of feed needed to produce a pound of chicken.

The winning birds of this contest went on to continue improving the genetic lines of meat chickens at a rapid pace, and still serve as the building blocks for the majority of meat bird genetic lines raised around the world to this day.

Demand in recent years has shifted slightly from the traditional white-feathered, fast-growing bird to a slower-growing, more traditional bird for reasons related to texture and flavor. Today, consumers can choose from a traditional or slower-growing bird meat bird, the latter of which takes about 25%-50% longer to mature, but has a richer flavor and greater proportion of dark meat.

Ignite the Masses, Lead with Compassion

While it’s difficult to find these slower-growing birds in the supermarket, farms across Southwest New York have them for sale, in addition to many local farms which also raise the traditional broiler.

There are many small and mid-sized farms in the region which produce two main categories of broilers: barn-raised and pasture-raised.

Barn-raised birds are reared in a barn with plenty of light, soft litter, good ventilation, ample feed and clean water. These farms typically have a larger number of birds for sale and you can sometimes find their chickens at local barbecues.

Pasture-raised birds are reared in a barn for the first one-two weeks from hatch to ensure that they get a good start before continuing their life outdoors. After this time, they are let onto pasture where they are able to forage for bugs and grass. These birds are fed a grain diet as well to make sure that they receive proper nutrition, which they are not able to get from foraging alone.

Pastured broilers take longer to mature compared to barn-raised broilers, but may have a slightly richer flavor profile since their diet is more varied. Typically, these flocks are smaller in size than barn-raised flocks. Many producers of slow-growth broilers choose to rear their flocks on pasture.

While there are some differences in how chickens are raised and the breed of chicken raised for the table, remember that behind every bird is a farmer who cares for their craft and is excited to share their wholesome, nutrient-rich chicken and farming story with you.

So, as you sit down to your summer feast with family and friends, take a small moment to send an ode to the chicken and the farmer who produced it.

(If you would like more information about this topic, call Amy Barkley, livestock management specialst, at 640-0844 or email amb544@cornell.edu.)