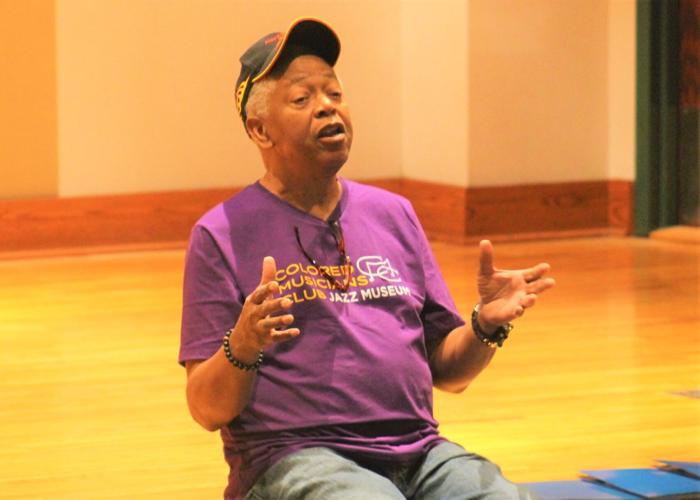 Danny Williams, president of the Colored Musicians Club of Buffalo board, discusses the history of African-American music in Buffalo during Saturday’s Juneteenth celebration at Jamestown Community College. 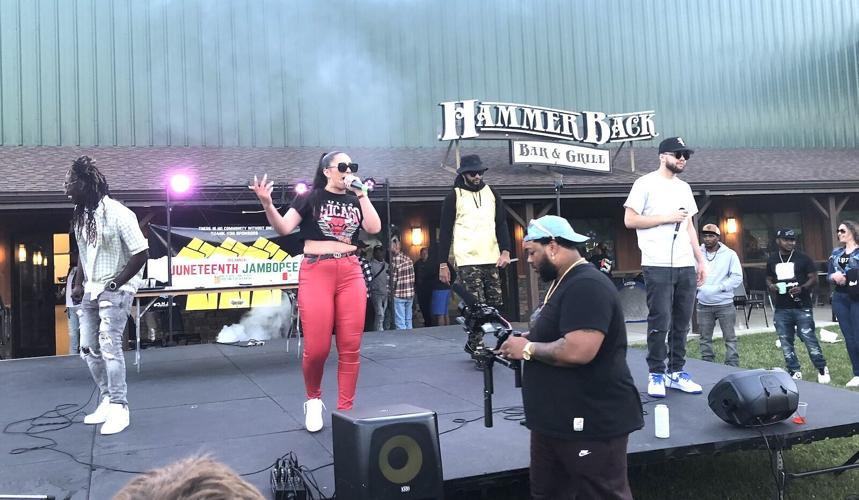 Danny Williams, president of the Colored Musicians Club of Buffalo board, discusses the history of African-American music in Buffalo during Saturday’s Juneteenth celebration at Jamestown Community College.

OLEAN — A talk on the history and impact of the Colored Musicians Club of Buffalo by one of its key members was a highlight of this year’s Juneteenth celebrations in Olean.

The city’s 11th annual public Juneteenth celebration Saturday was a collaboration between Jamestown Community College and the African American Center for Cultural Development and held on JCC’s Cattaraugus County Campus for the first time.

Dozens of attendees came by to enjoy the food, music, exhibits and personal connections with the Black community. In the Cutco Theater, Danny Williams, president of the Colored Musicians Club board, gave his presentation on the history of African-American music in Buffalo.

“The Colored Musicians Club is a community-based organization that is a remnant of the old American Federation of Musicians colored unions,” explained Williams, a lifelong resident of Buffalo who joined the club in 1982.

Williams, who plays the trombone, baritone horn and cello, said he began his musical career in seventh grade and has played professionally since 1968.

At the turn of the 20th century, when Buffalo had a population nearly double what it is today, Williams said the colored musicians were given its official designation as a union — one of about 35 unions of Black musicians issued in the largest cities across the country.

Although they had their own union, it was against the law for one American Federation union to displace another, said Williams, a retired Buffalo police lieutenant. It was difficult to find work with another white union already in Erie County, but once venues found out the colored union was playing jazz, getting hired became a lot easier. What they really needed was a place of their own.

“After we played in these nightclubs and places around the city, we couldn’t go order dinner with our wives or dates,” he said. “We had to leave through the kitchen, and if we wanted dinner we had to eat in the kitchen or take a box lunch.”

The union soon bought their own club so they could have a place to socialize and play, and they opened it up to anybody who could play.

During those decades, everyone from Duke Ellington and Miles Davis to Ella Fitzgerald and Lena Horne came through their club to play or sing during a jam session. Williams said everybody traveled by train in the 1920s and ’30s, and any trains going west from the northeast would stop in Buffalo, which had the country’s third-largest train station at the time.

Pretty soon, two hotels specifically for Black patrons were established — one near the train station and one near the club. In a matter of years, several more clubs were established along that two-mile stretch on Broadway and William Street. It became known as the Jazz Triangle of Western New York, Williams said.

Youth of the Week: Everett Swenson

In addition to the club and union hall, the building had a credit union where the club members could save their money and use it to buy homes, cars and invest right into their neighborhood. Williams said 150 members lived within a mile of the club, jam sessions were held in the nearby parks and parades marched up and down Broadway.

Fast-forward to the 21st century, and the club doesn’t need the union for musicians to be successful and they don’t need the credit union in order to invest in the community. In their place in the building is a museum, which Williams said is listed on the National Register of Historic Places and is one of the top 10 preservation sites in New York. The museum includes the history of Black music in America from African music slaves brought with them up through blues and gospel to the music of today.

“The club itself now, the mission has changed. What we try to do now is reach the kids in the inner city,” Williams said. “Regardless of your race, religion or sexual orientation, we’re trying to introduce you to the music.”

The club has a number of free programs and festivals where the public has the opportunity to support its mission. A $2.95 million renovation and expansion of the club is expected to begin later this year, adding over 2,000 square feet of space to the existing building, a new handicapped accessible main entrance and an elevator along with a reception/lobby area, Williams said.

“We’re trying to bring the music into the inner city, and then bring that music out to the public,” he said. “As long as you can play, we don’t care what you look like.”

For more information about the Colored Musicians Club and its museum, visit thecoloredmusiciansclub.com.

ALSO OVER THE WEEKEND, The third annual Juneteenth Jamboree Festival, featuring local and Western New York rap artists and DJs, thumped the day away Saturday at Good Times of Olean.

Chicken and ribs barbecue was served by Me and Him BBQ Catering.

On Sunday, a Juneteenth and Father’s Day brunch and bowling tournament were held.(Contact editor/reporter Kellen Quigley at kquigley@oleantimesherald.com.)