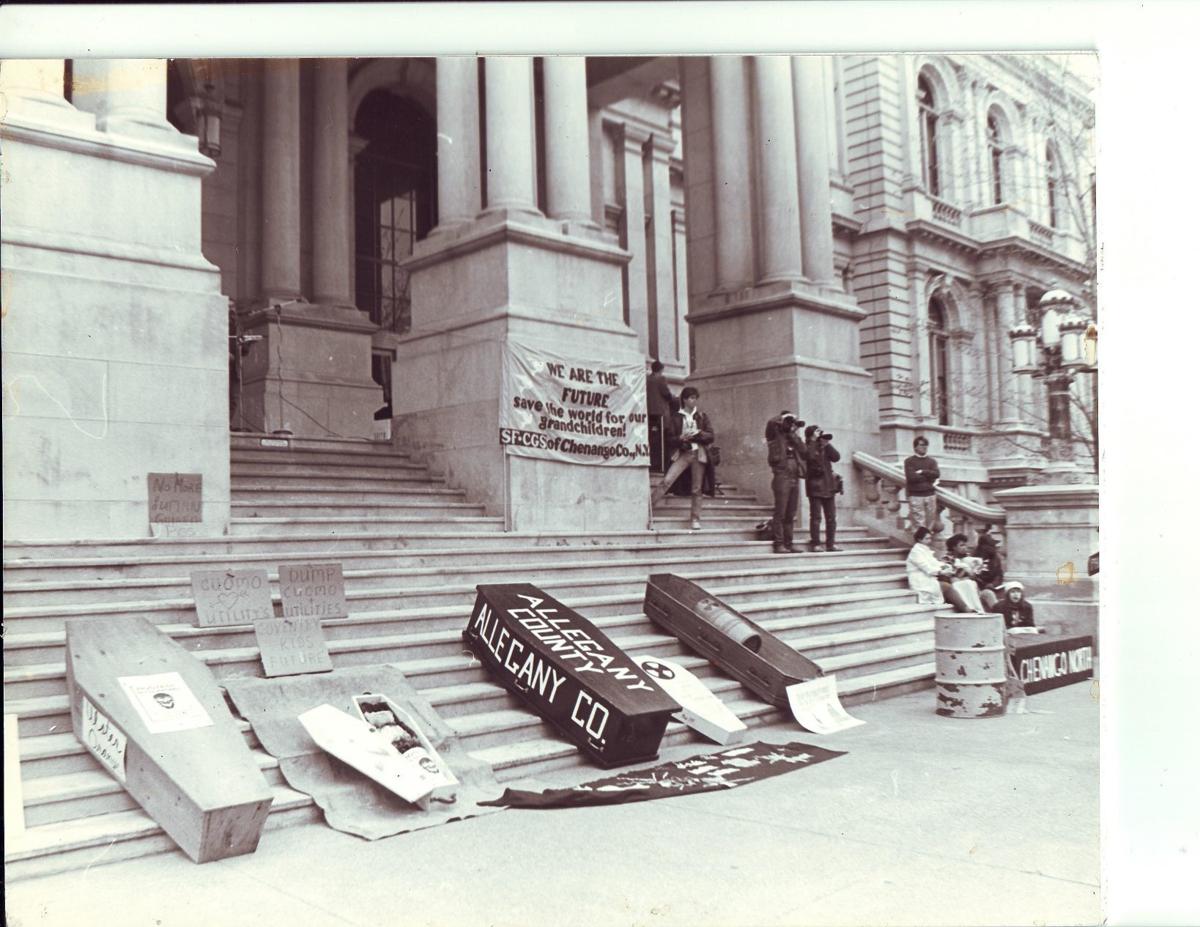 Coffins, including one in the middle from Allegany County, are shown on the Statehouse steps in Albany. 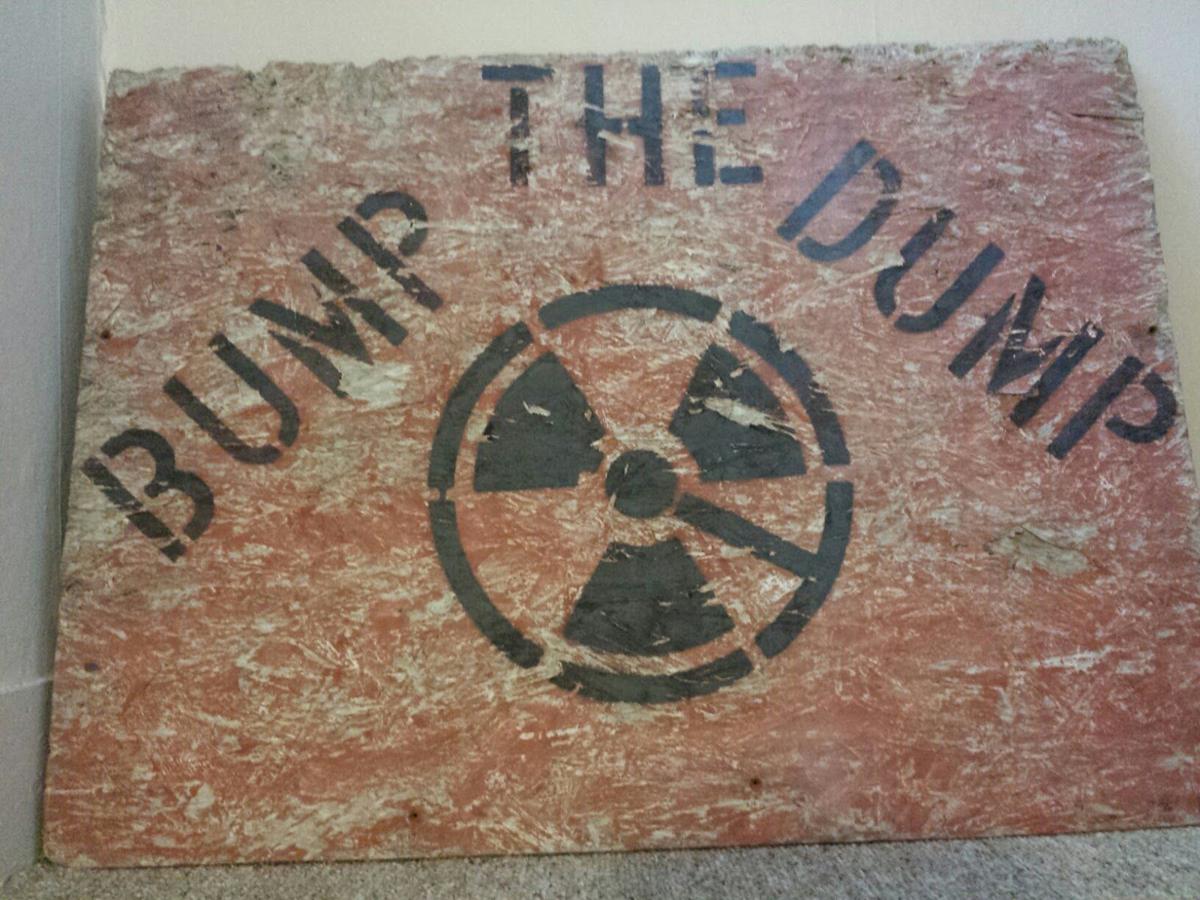 A Bump the Dump sign from the efforts decades ago to block a nuclear waste site in Allegany County.

Coffins, including one in the middle from Allegany County, are shown on the Statehouse steps in Albany.

A Bump the Dump sign from the efforts decades ago to block a nuclear waste site in Allegany County.

ANGELICA — Can citizen David successfully slay a threatening corporate giant? If the fight includes someone like Fleurette Pelletier and some of the stones to sling are information, the help of an environmental lawyer, and the demands of some dedicated residents, the answer is yes — and yes again.

In the late 1980s, Pelletier and her husband lived on Long Island when they learned about a plan to build the Shore-Wading River Nuclear Power Facility. They saw a problem with putting a nuclear power plant on a densely populated island serviced by only three exit roads. What if something went wrong?

Pelletier and her neighbors said they had a right to live. They had a right to an evacuation route. If a giant threat was to be built in their space, the people already living there had rights that had to be considered and accommodations had to be granted. In the end, the courts agreed with the people and a half-built nuclear power plant was abandoned.

Score one for citizen David.

Shortly after that battle the Pelletiers chose to relocate to a little village for a quiet life running a bed and breakfast. What could go wrong? Well, the tentacles of industry might choose that same small town. Industry pollution and the Pelletiers met in Angelica. Someone knocked on the door of the Victorian home that the Pelletiers were turning into a bed-and-breakfast and told them there were plans to put incinerator ash on Peacock Hill. A meeting would be held the next week. Maybe they’d like to attend.

At that meeting Pelletier heard a presentation filled with casual lies, big lies and twisting lies about incinerator waste ash. After the meeting seven people gathered outside the door and agreed they needed to do something. There and then they called themselves concerned citizens and that was the beginning of the future Concerned Citizens of Allegany County, or CCAC.

The majority of people who had attended the presentation were hungry for jobs. They looked at incinerator ash and saw a blessing. Pelletier and a few other people felt like they were being manipulated — conned, really — so they went in search of information.

There was an environmental meeting in Buffalo on the content of incinerator ash, so a group went to listen. After the meeting they were able to talk to some of the presenters and told them their worries about an ash landfill on Peacock Hill. One presenter told them that the incinerator ash was toxic, but they were already under environmental assault both from an incinerator with no scrubbers pouring toxins into the air in Cuba and a foundry with no scrubbers in Friendship.

People in those towns had been complaining about not being able to breathe easily. Band kids would go outside to practice their routines and vomit. Every morning people would clear ash from their cars and porch steps. Most people were not aware of what was in the air or in the dusty ash that rained day and night or how bad it was. What they looked at was that they were getting paychecks.

Pelletier, along with Sheila Grastorf and Pat Kaake, consulted an environmental lawyer and went to the courts with the financial backing of area landowners. They had meetings and suffered death threats, but they kept at it until the foundry and the incinerator were shut down. The David and Goliath fight wasn’t going so well for the Goliaths.

WNY under review this week to enter Phase 2

Many people worked together to accomplish the win but there was no formal structure of what we know as CCAC until the long arm of the nuclear industry rested its eye on Allegany County’s soil. The state of New York said the soil in Allegany County was absolutely perfect to store nuclear waste, but at the time the state didn’t know that soil had experienced protectors in town.

The state made this evaluation of the soil from a distance and that wasn’t going to stand with the folks in Allegany County. The governor’s office (Mario Cuomo at the time) sent people to check the soil and the local sheriff (Larry Scholes) was to protect them.

Pelletier remembered waiting in barns and getting calls on a CB radio to direct protesters to the location of the siting commission so they could surround the commissioners and keep them out. Local Amish women would bring food and those standing in the cold knew their backs were covered by neighbors, especially after 5,000 people showed up in Belfast for a presentation on the topic.

That meeting and the linked arms of people in the fields often filled Pelletier with tears of pride. She shared her feelings with landowners in letters she sent appealing for funds to continue with the court battles. The work brought her into contact with many wonderful people, and with the force of the law.

She watched people who were running away grabbed by the backs of their jackets by the state troopers who arrested them.

She said that there were representatives of the local Health Department who told her that if there couldn’t be a nuclear waste dump here that the hospitals would have to stop giving cancer treatments. Armed with an understanding of nuclear waste, she laughed at them. The state didn’t choose Allegany County because it had “perfect soil,” it chose the sites because the state expected obedience and no resistance.

The siting commission was followed by a group of people carrying a coffin. The governor found protestors outside his fundraising events where signs surrounded stretch limos and brought visible annoyance. The end of a long series of efforts involving countless meetings, intense study, acts of art and courage and county wide coordination. The siting commission was disbanded, the soil remained untested and the Concerned Citizens of Allegany County linked arms over their beloved land.

(The Hardman family left Wellsville to teach in Malaysia for 15 months returning to Wellsville in 1988 with a strong appreciation for environmental protection laws. Elaine went to the meeting in Belfast, attended civil disobedience training, accepted the orange arm band and proudly linked arms on roads in Allegany County. Follow Concerned Citizens’ FB page or attend their next meeting. Phone/text 585-466-4474 or email contactusccac@gmail.com.)