You are the owner of this article.
Edit Article Add New Article
You have permission to edit this article.
Edit
Welcome, Guest
Home
COVID-19
News
Sports
Obituaries
Opinion
Lifestyle
Multimedia
Classifieds
+ More
1 of 4

Gowanda’s Historic Hollywood Theater is nearing the end of a decades-long preservation project. The public will get a glimpse of the work on April 19, the 95th birthday of the theater’s opening. 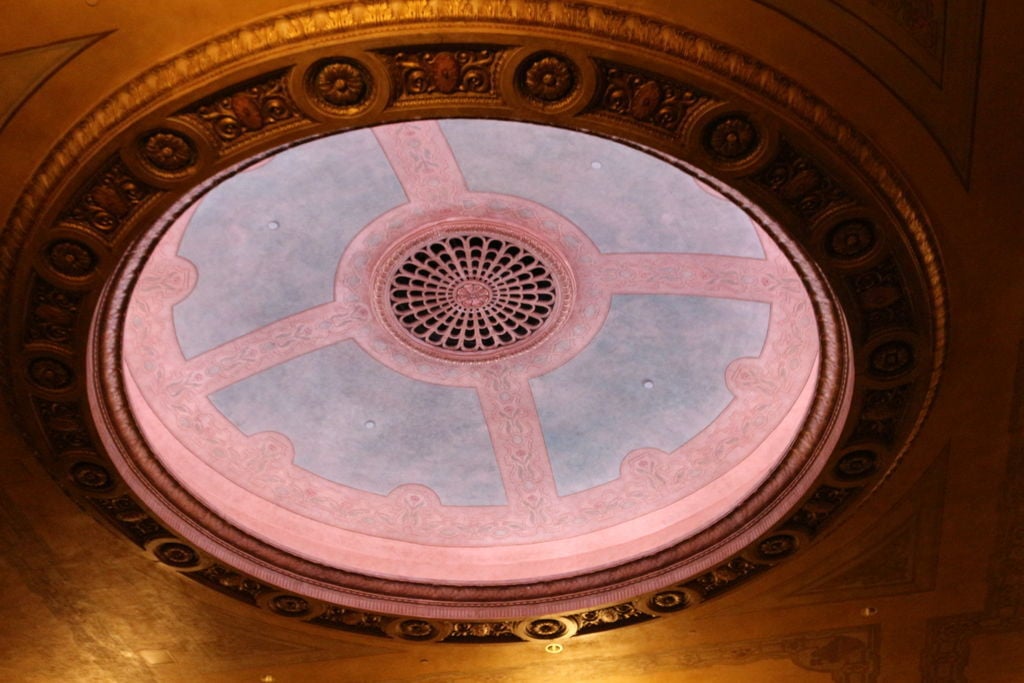 This lighted dome in the center of the ceiling of Gowanda’s Historic Hollywood Theater changes colors. 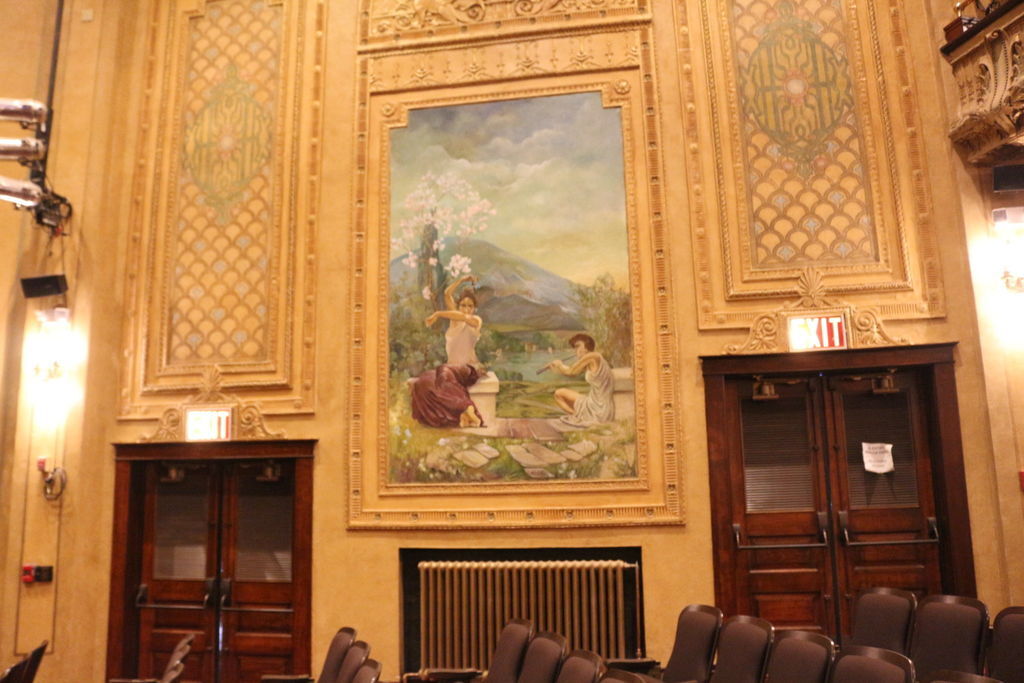 This is one of two murals that were lovingly restored during the renovation and preservation of the Historic Hollywood Theater in Gowanda. 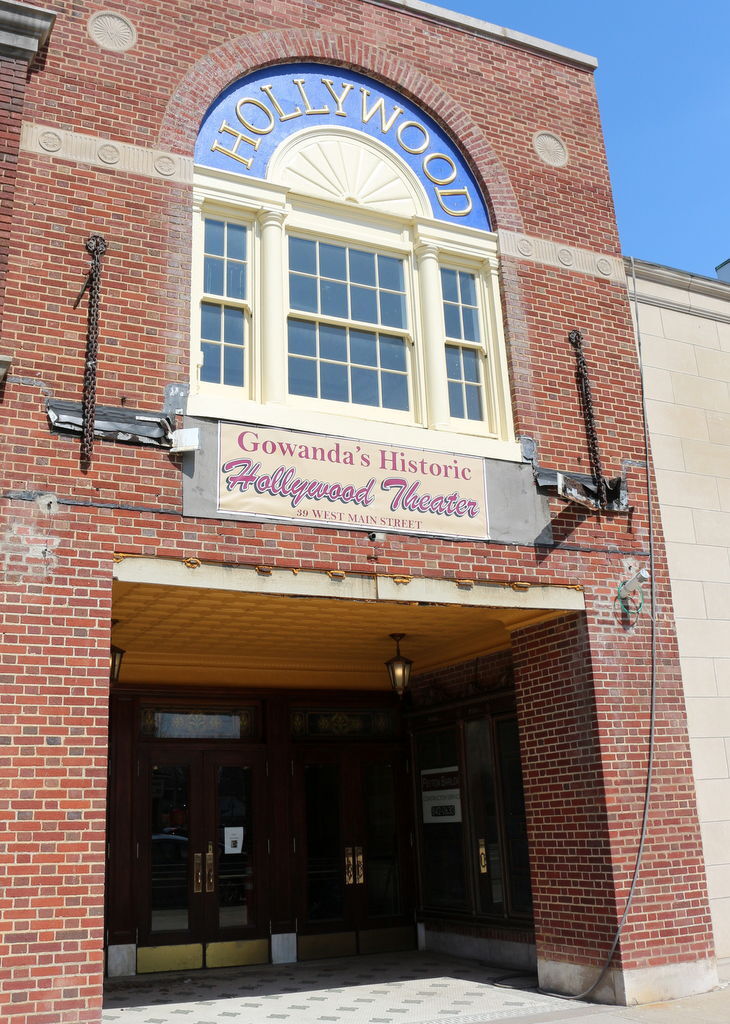 The exterior of Gowanda’s Historic Hollywood Theater awaits the reinstallation of the theater’s restored marquee in early summer.

Gowanda’s Historic Hollywood Theater is nearing the end of a decades-long preservation project. The public will get a glimpse of the work on April 19, the 95th birthday of the theater’s opening.

This lighted dome in the center of the ceiling of Gowanda’s Historic Hollywood Theater changes colors.

This is one of two murals that were lovingly restored during the renovation and preservation of the Historic Hollywood Theater in Gowanda.

The exterior of Gowanda’s Historic Hollywood Theater awaits the reinstallation of the theater’s restored marquee in early summer.

GOWANDA — The Historic Hollywood Theater on the village’s Main Street will celebrate its 95th birthday on April 19 with tours open to the public as the decades-old theater preservation project nears an end.

The nearly $5 million restoration of the movie theater, built in 1926 by Richard Wilhelm, was begun in 1997 after the building was damaged by water. The theater had closed in 1992. The Gernatt Family purchased the property and donated the building

“For decades, board members have been restoring the theater one historic phase at a time,” said Deb Harris, grant and project administrator. “Paying close attention to detail, the theater looks and feels just the way it did in 1926.”

It is the only theater in the county to be listed on the National Register of Historic Places.

“Not much has changed,” Harris said. “That is the true hallmark of preservation. Seats are in place, original carpeting has been duplicated, murals and ornate plaster have been cleaned and restored and the beautiful deep, burgundy curtains have been hung.”

Harris and the board of Gowanda’s Historic Hollywood Theater know there is more to do before the restoration project is complete, but are eager to welcome the public “to see all the progress that has been made and to hear our plans for the future.”

Visitors are asked to wear a mask and social distance during your tour of the theater.

“Everything has been delayed by COVID,” Harris said. The iconic Hollywood Theater marquee that is being restored with LED lights was delayed when the Chinese plant that made the sockets was told to make personal protective equipment due to the pandemic.

Now, the marquee is expected to be reinstalled by early summer, Harris said. It’s too hard to predict a date for completion.

Cattaraugus County to administer 300 doses of vaccine Thursday at JCC

There are 660 seats on the floor of the theater, slightly fewer than the original seats, Harris said. The aisle stands were able to be used — so the aisles look the same — but the seats were duplicated, if somewhat wider. More than 200 seats are in the balcony.

When Harris turns up the theater lights, the depth of the restoration work is apparent. It probably hasn’t looked this nice since the 1970s. The dome in the center of the ceiling changes colors. Murals on either side of the stage have been lovingly restored. The deep burgundy color of the stage curtains, which had to be custom-dyed, set off the entire room.

“This is breathtaking,” she said. “We’re on the 10 yard line” as far as the project goes. So far, the Gowanda Area Redevelopment Corp., and later Gowanda’s Historic Hollywood Theater Ltd., has received grants and raised and spent more than $4.5 million. That doesn’t count the matching funds and sweat equity board members and volunteers have done over the years. The final tally will be over $5 million.

Besides the marquee and some railings in the balcony and glass panels on the wall at the rear of the theater area, there is some electrical work that remains to be done.

Harris tracked down pieces of the original carpet from the former owner and got photographs. Board member Karen Burr pored over hundreds of carpet samples to match the carpet as close as possible.

“Everything was seriously delayed last year by COVID,” Harris said. Fundraising included. Jacob Swanson staged a month-long streaming concert in December with proceeds going to the theater. He plans another classical concert on June 5, which will be limited to 100 guests due to the pandemic.

Theater audiences will hear all this through a state-of-the-art Bose sound system, Harris pointed out.

One thing they plan to bring back to the theater this year is Theater Camp, Harris said. Out of necessity, it was held virtually last year. “They are anxious to get in here this year with curtains that work,” she smiled behind her mask.

“I didn’t want the theater’s 95th birthday to go by without showing the public how good she looks,” Harris said. “Visually, it’s just so stunning. She deserves to be celebrated.”