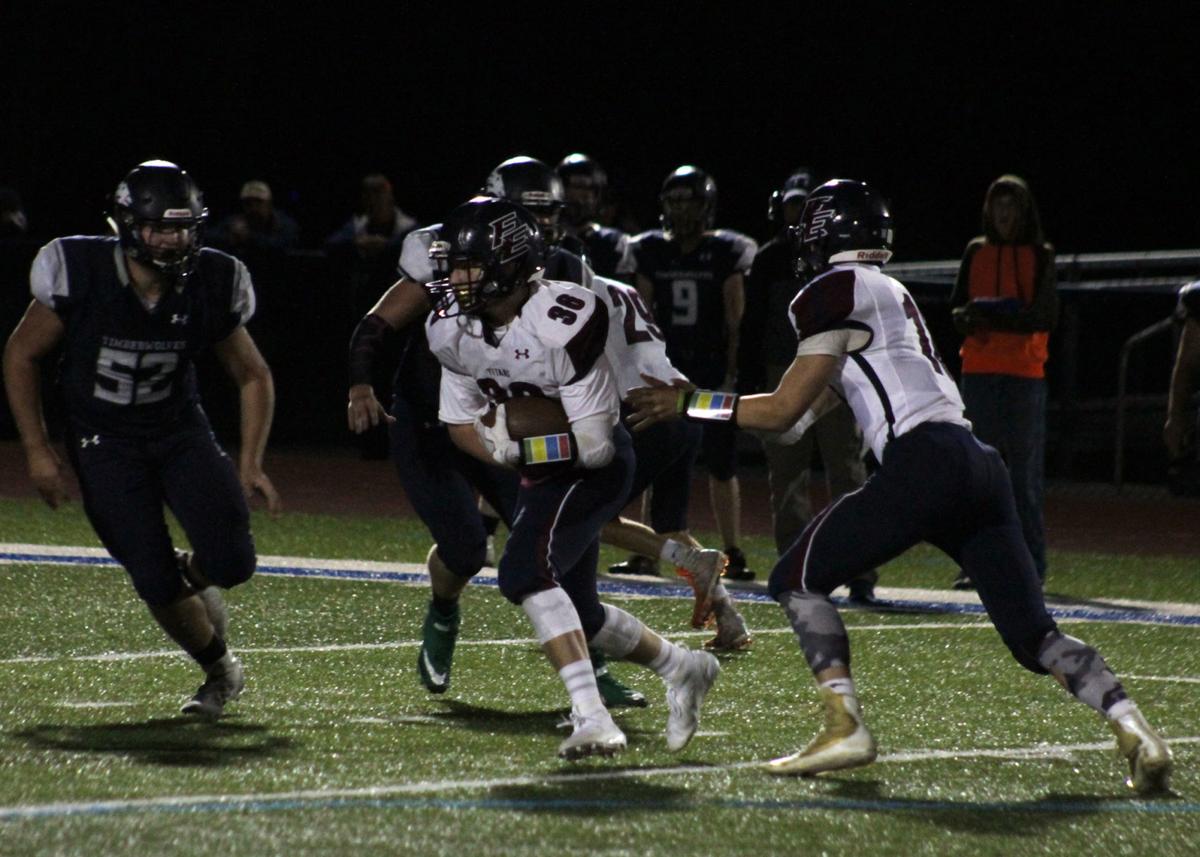 Franklinville/Ellicottville’s Jordan Grinols (36) takes a handoff from Logan Frank (18) against Cattaraugus-Little Valley during a high school football game on Friday in Cattaraugus. 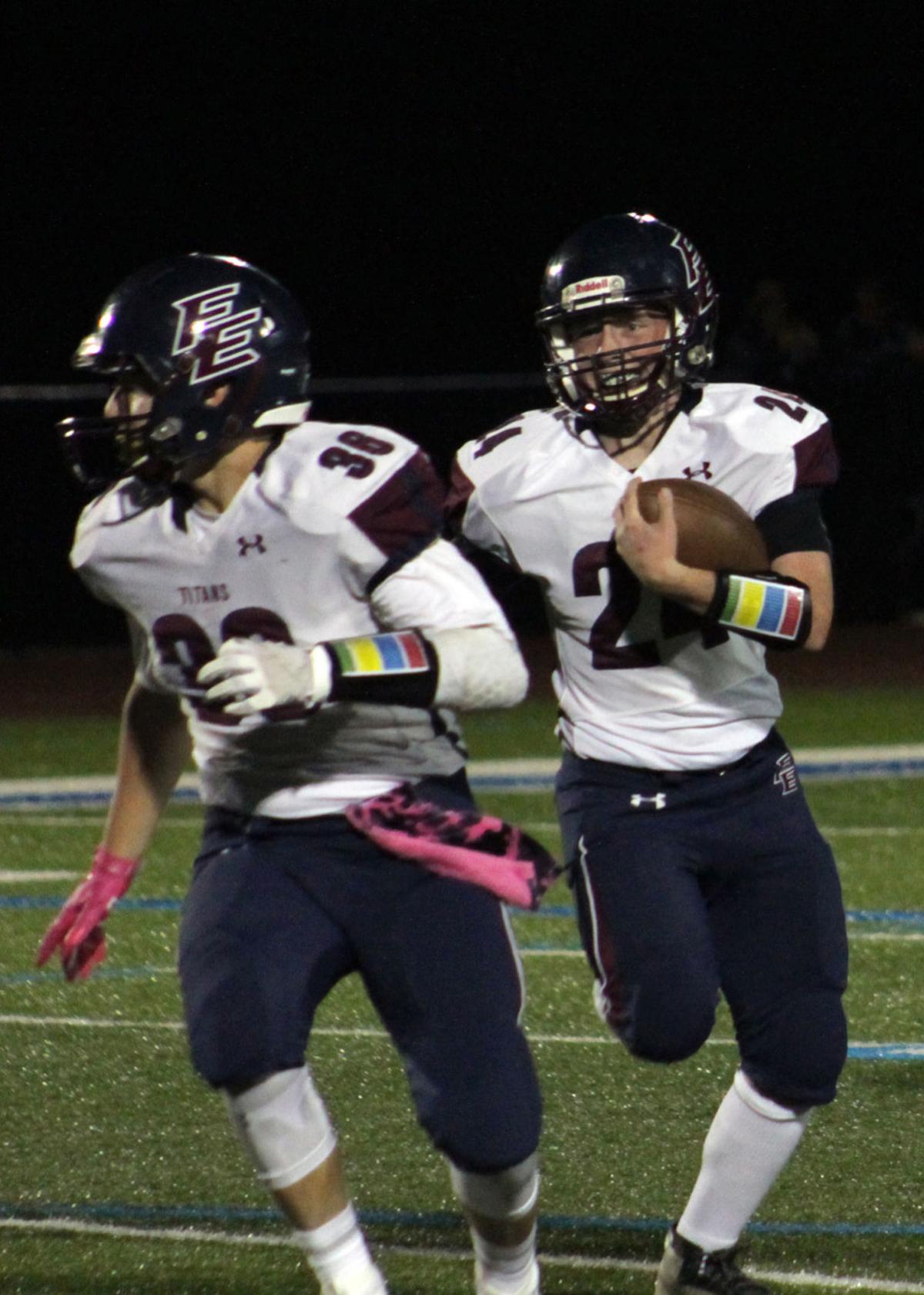 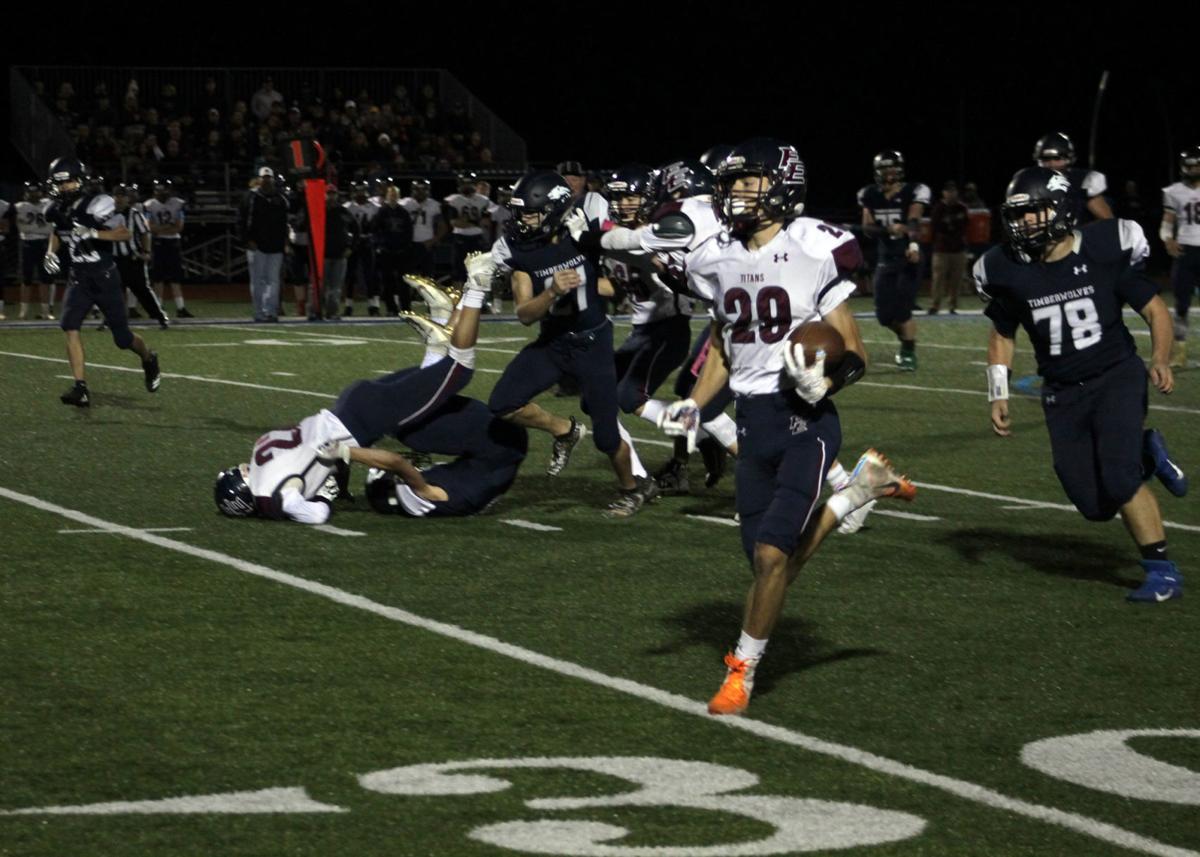 Franklinville/Ellicottville’s Tyler Clear (29) runs away from the Cattaraugus-Little Valley defense to score a rushing touchdown on the first play from scrimmage during a high school football game on Friday in Cattaraugus. 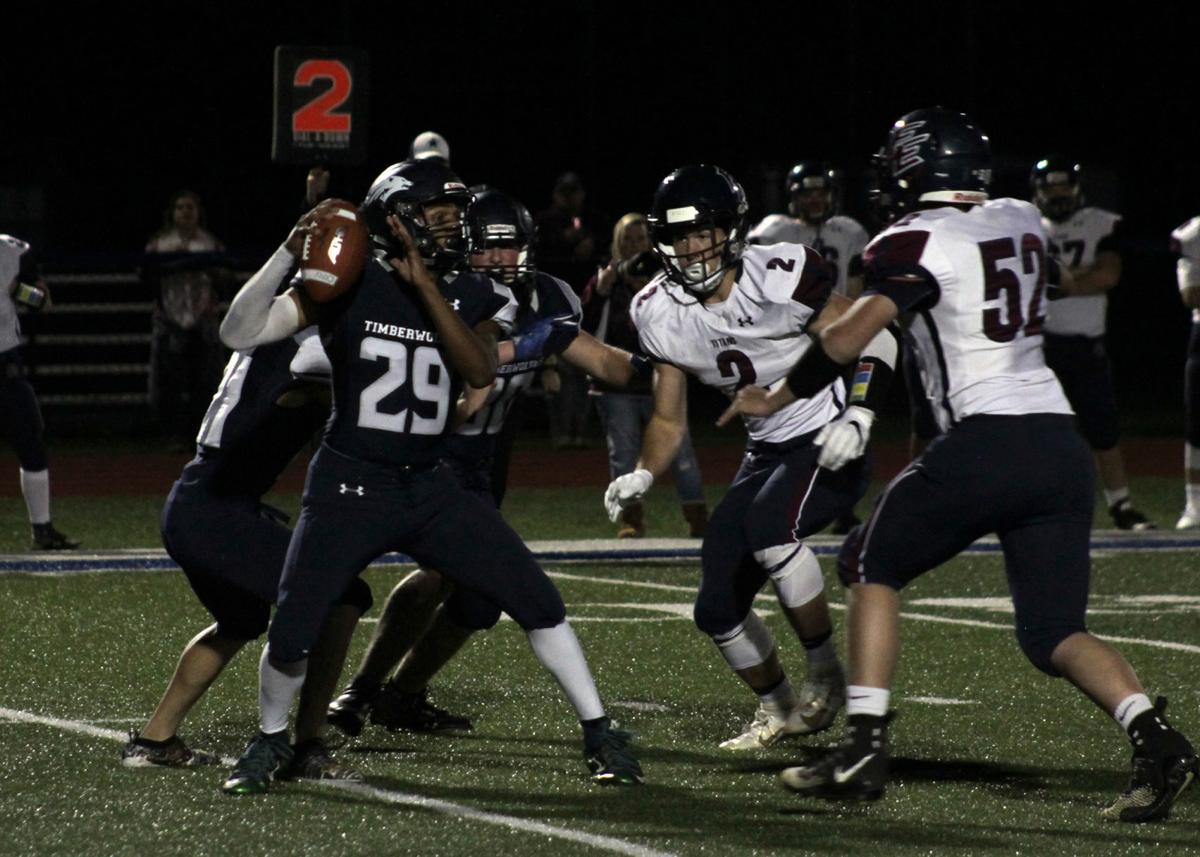 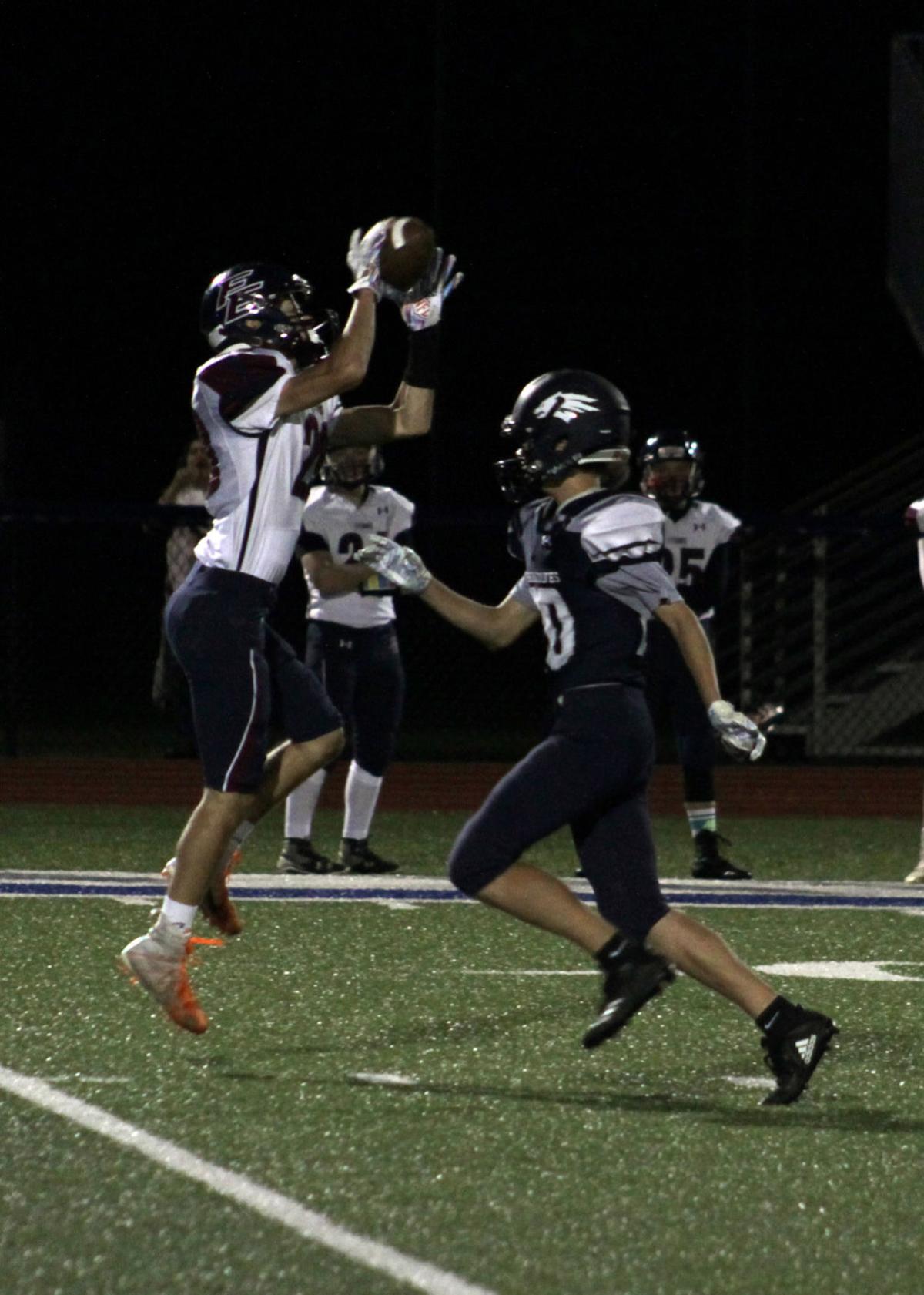 Franklinville/Ellicottville’s Tyler Clear (29) pulls in a pass reception in front of Cattaraugus-Little Valley’s Christian Hines (20) during a high school football game on Friday in Cattaraugus.

Franklinville/Ellicottville’s Jordan Grinols (36) takes a handoff from Logan Frank (18) against Cattaraugus-Little Valley during a high school football game on Friday in Cattaraugus.

Franklinville/Ellicottville’s Tyler Clear (29) runs away from the Cattaraugus-Little Valley defense to score a rushing touchdown on the first play from scrimmage during a high school football game on Friday in Cattaraugus.

Franklinville/Ellicottville’s Tyler Clear (29) pulls in a pass reception in front of Cattaraugus-Little Valley’s Christian Hines (20) during a high school football game on Friday in Cattaraugus.

CATTARAUGUS — It didn’t take long on Friday night to show why Franklinville/Ellicottville has been the team to beat among Western New York Class D football squads this fall.

Visiting Cattaraugus-Little Valley in a Class D league game, the Titans scored on their first two plays from scrimmage, both from midfield (42 and 56 yards), and added another on their third play of the following drive to take a 21-0 lead over the Timberwolves. F/E added three more touchdowns in the second quarter and cruised to a 42-8 win.

“They ran it the way we drew it up,” Titans coach Jason Marsh said of F/E’s quick scores. “We put a gameplan out there and the kids executed it well. Calling plays is easy when they execute it like that. It really comes down to the kids executing.”

Senior Tyler Clear scored F/E’s first three touchdowns. First, he ripped a 42-yard touchdown run on the game’s first play (set up by a 25-yard Devin Neamon kick return). Then after a three-and-out stop by the Titans’ defense, Clear caught a pass from Logan Frank and took it for a 56-yard score. He caught another touchdown pass from Frank, for 19 yards, on F/E’s third drive of the game.

“Tyler can do it all,” Marsh said. “You can put him out at wide receiver, you can put him in at running back and he’s very versatile. He’s a good athlete, and we have a number of guys like that. We really do. The hardest part (when) you have a lot of guys is getting everyone touches.”

Frank threw just four passes but completed three for 94 yards and a touchdown, and finished as F/E’s leading rusher with 54 yards on three attempts.

Ryan DeKay (10 carries, 41 yards) and Wyatt Chudy (40-yard run) also scored a touchdown for the Titans (6-0). Eight different players had at least one carry or the Titans.

“It’s nice to have those options,” Marsh said. “We have guys that step in and do things, we just have a lot of really capable guys. They come and work hard, they practice hard all week and it shows come gameday. Everyone’s ready. When it’s their turn to step in and do their job, they get the job done.”

Leading the F/E defense, Zack Wolfer made five tackles including a sack and Niklas Logel had an interception. Kameron Ramadhan recovered a fumble on a kickoff late in the second quarter to set up F/E’s last score.

The Titans slowed down in the second half with substitutions to bring in second-stringers. C-LV scored its lone touchdown in the fourth quarter as Nick Burroughs completed a 51-yard pass to Sully Higgins.

The Titans will enter their Week 7 visit to Salamanca rolling, having won every game this season by double-digits, the closest being a 16-point win over defending state champion Clymer/Sherman/Panama. So far, F/E has been able to avoid any letdowns.

“I really think this team is goal-oriented,” Marsh said. “They set goals for themselves. Each week they’ve got things they want to achieve and they kind of do that on their own. It’s a great thing to have. They’re self-motivated.”

“That’s a really good team, one end of the roster to the other,” Miller said, “fast, strong, disciplined, really solid blockers and tacklers and runners. That’s just a good football team. Well-coached. Jason did a great job with that group.”

Try as he did to prepare the T-Wolves to face the Titans, Miller said F/E’s speed led to those quick strikes in the first quarter.

“You prepare and you can’t simulate that in practice,” Miller said. “We don’t have that kind of speed, so when you come out and see it, I think for the kids, it’s like, ‘Holy crap, they’re really fast.’ So it’s not lack of preparation, it’s that the preparation doesn’t prepare you for the speed and the strength of a team like that.”

Red Zone podcast: How the Badgers will fare in the NFL draft and how the hoops team hitting the homestretch