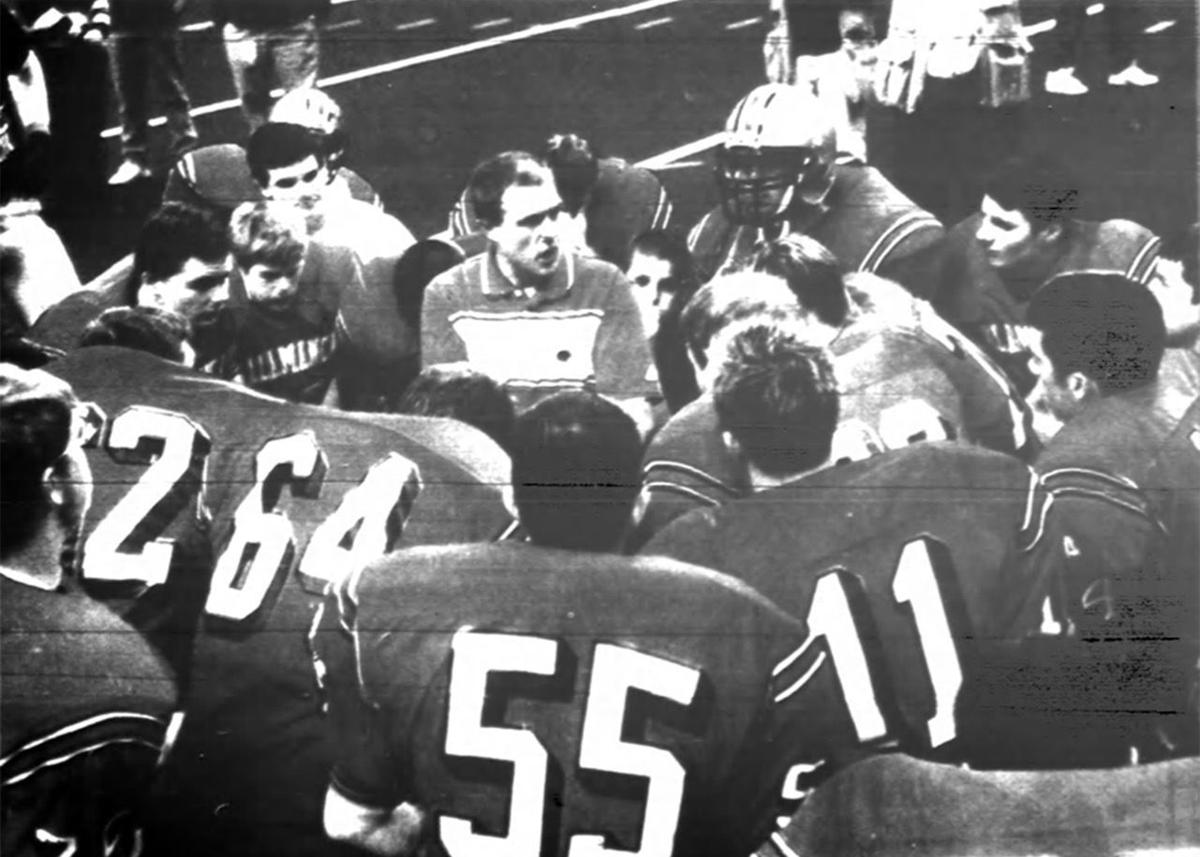 The Salamanca Warriors varsity football team huddles around coach Rich Morton during a game in the 1999 season. 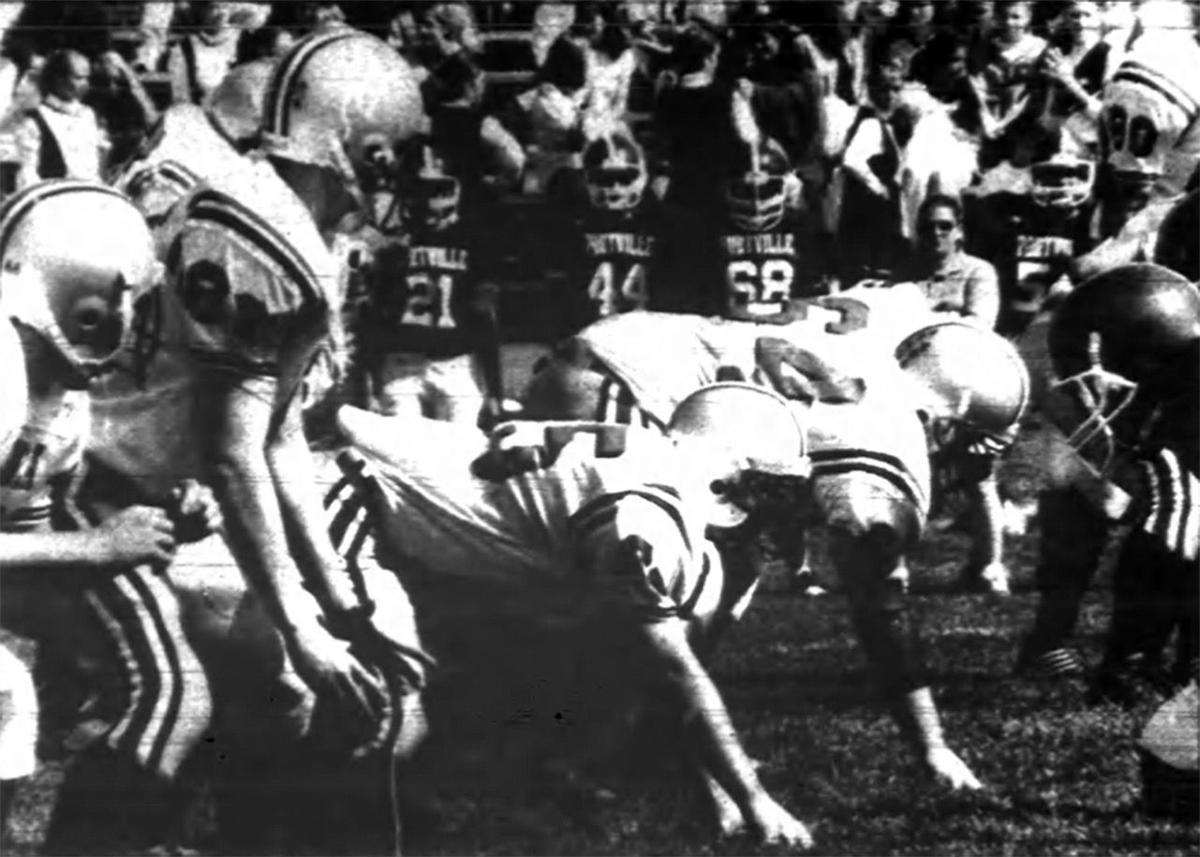 The Salamanca defensive line readies for the snap during a game against Portville in 1999.

The Salamanca Warriors varsity football team huddles around coach Rich Morton during a game in the 1999 season.

The Salamanca defensive line readies for the snap during a game against Portville in 1999.

(Editor’s note: This is the first in a three-part weekly series on the 1999 Salamanca football season, which culminated in the program’s first state championship game appearance.)

Morton, of course, replaced a legend in George Whitcher, Salamanca’s coach from 1974-98. Whitcher left the program in outstanding shape, going 9-2 in his final season and winning a Section 6 championship.

But the program reached new heights in 1999, as Salamanca won a Far West Regional for the first time in school history and reached its first-ever state championship game appearance.

Morton and several key players from the ‘99 state finalist team recently spoke with The Press to reflect on the 20th anniversary of that school year.

“Thinking back on that group of kids, it was amazing the kind of athletes they were and the kind of dominance that they brought,” Morton said. “Their commitment to being the kind of athletes they were, playing at that level and the excellence that they expected from themselves, not only from them but from everybody else around them. That era was full of kids that were very outstanding athletes in their own right. It’s easy when you have those types of kids that are committed to the program like they were. It was easy to see why they were successful.”

MORTON SAW early on, in summer weight training sessions, the kind of committed athletes he would be working with in his first season as head coach.

“It was just kind of their expectation of themselves and where they wanted to be,” he said. “It wasn’t like a job or like they didn’t like coming. It was fun for them. They enjoyed being in the weight room in the summertime and going out and working on all the extra stuff on the track, inside the track after we would lift. The chemistry of those kids was just really neat to be around because their expectations were high. They expected that from everybody around them. If you weren’t giving it a hundred percent effort, they’re going to let you know about it. They were just a fun group of kids to be around. They kind of made my job easy.”

But the on-field talent became clear a week before the regular season, when the Warriors dominated their annual scrimmage.

“We were scrimmaging Pioneer, I still remember the last play,” Morton said. “They were on the goal line and we had to stop them. Chris Drugg, who pound for pound, I don’t think there was a tougher kid at any position … and they had one one of their big running backs come up through the line and Chris hit that kid and stopped him right in his tracks. Boy, did he make a statement that day. It was just like, ‘Oh my god.’

“I mean, these kids came to play. They were no-nonsense kids. They understood what hard work meant and to each other and what it would take to be successful. There’s not many times as a coach that you’re going to be able to get that kind of athlete, that many of them.”

THE TEAM had five Big 30 All-Stars, as awarded by the Times Herald: Drugg (running back), Josh Hostuttler (linebacker), Marty Jacobson (defensive line), Andy Murphy (offensive line) and Jason Siafakas (defensive back). Siafakas was named Big 30 Defensive Player of the Year and made Class C first team all-state, while Drugg and Hostuttler were both second team all-state.

So talented was this team, one of the great backs in program history, Dustin Ross, couldn’t find playing time in the backfield, so he instead played on the line and at outside linebacker as a sophomore. Two years later he would be the Big 30 Player of the Year and lead the Warriors to a Section 6 title.

“Dustin, by far, was one of the greatest athletes that you could see,” Morton said. “As a sophomore, he was that talented, but because our backfield was so experienced, Dustin wasn’t able to get into the backfield that year ...

“Because I had Hostuttler back here, Siafakas and a lot of good kids. We had a great quarterback, Mike Potter. He was just a student of the game. I mean, these kids make plays happen that most kids wouldn’t have. They could break tackles, they could read the defense, they could just do things that the average kids don’t do. It was just innate. I mean, even teaching that stuff, you can’t teach them that. So it was a pretty fun time to be involved in Salamanca football.”

SALAMANCA WENT undefeated through the regular season at 8-0. It passed an early test by defeating a larger school, Cheetowaga, in Week 1, 29-14.

“I think there was a high level expectation of what should happen with those kids and where we were going with the program,” Morton said. “It’s hard to know when you’re starting off right from the very get-go. I think our first game that we played was against Cheektowaga, here at Salamanca, which was a bigger school coming in to play us. And I can remember it was a really nice night, sunny and warm and it was an exceptional night. (For) everybody, probably, it was a wait-and-see how things were going to be with the transition of coaching.

“We didn’t look past our opponents further down the road. I mean, our expectations were high, our goals were high, but we only took one game at a time making sure that we didn’t have an off week because we didn’t prepare for whoever we were playing. And as things progressed that year — as we started winning, we were undefeated — I think things kind of got exciting for the town, as they always were in the past. The expectations were that we always would be in the hunt for the sectional title every year.”

Salamanca proved much more dominant in a second meeting with Eden, taking a Section 6 Class C semifinal, 40-12, scoring the first 33 points as Drugg and Siafakas scored two touchdowns each. The win set up a rematch with the Warriors’ Week 2 opponent, Allegany-Limestone, at Ralph Wilson Stadium for the sectional title.

“As a coach, when you have that kind of talent and that kind of work ethic with kids, it’s amazing,” he said. “It makes your job easy because they were quick learners. There wasn’t a lot that we had to do to try and teach them what they had to do. These kids were smart football players. What I mean by that is that they knew what was going on during the game. They knew the down and distance, they knew what the formations were, they just had a sense on the field what they needed to do in certain situations and how to react to them.”