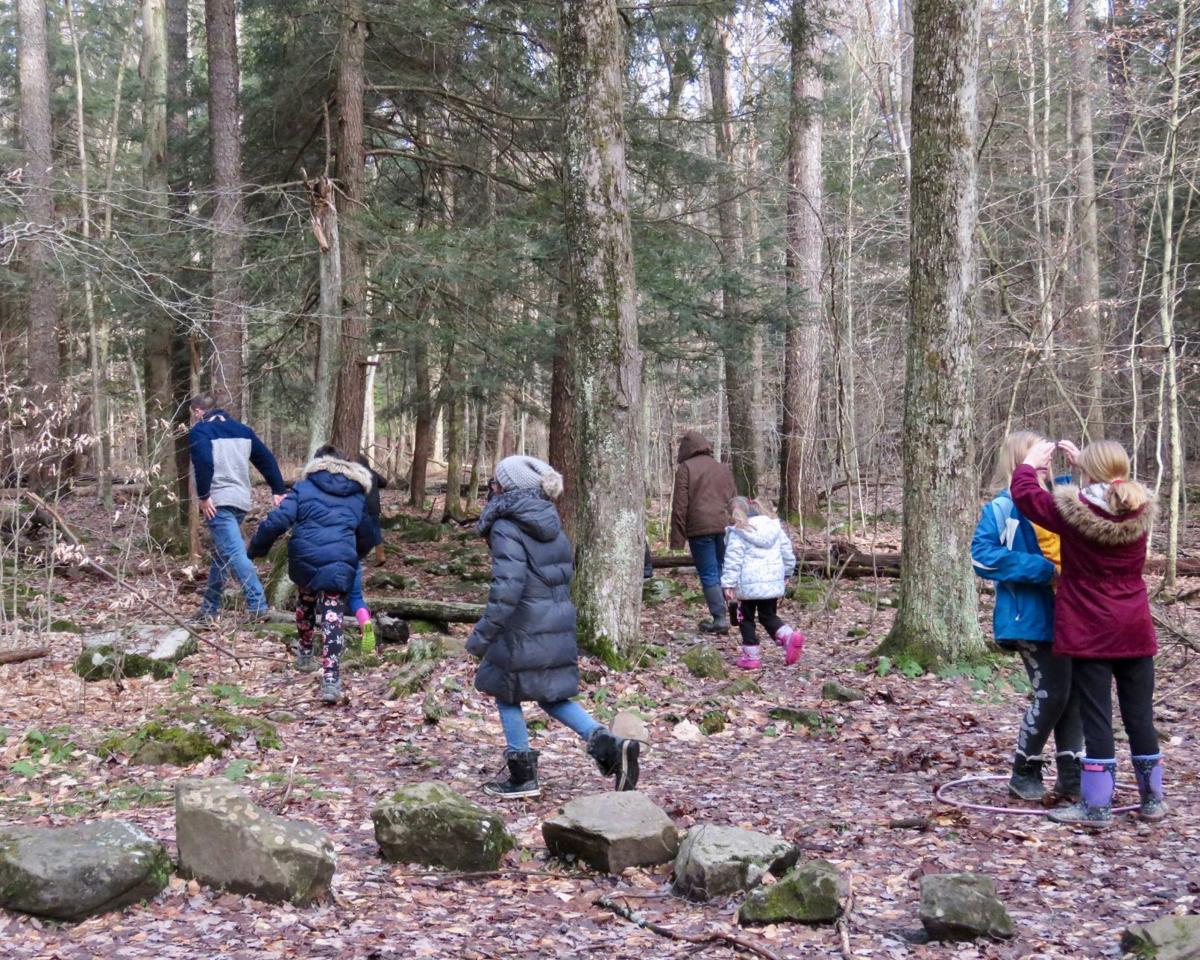 One of the favorite activities enjoyed by the campers is “Games-in-the-Woods,” which is a hide and seek-type game played in the woods. Participants in the Games-in-the-Woods set out to hide amongst the trees while the seeker has her back turned and eyes covered. 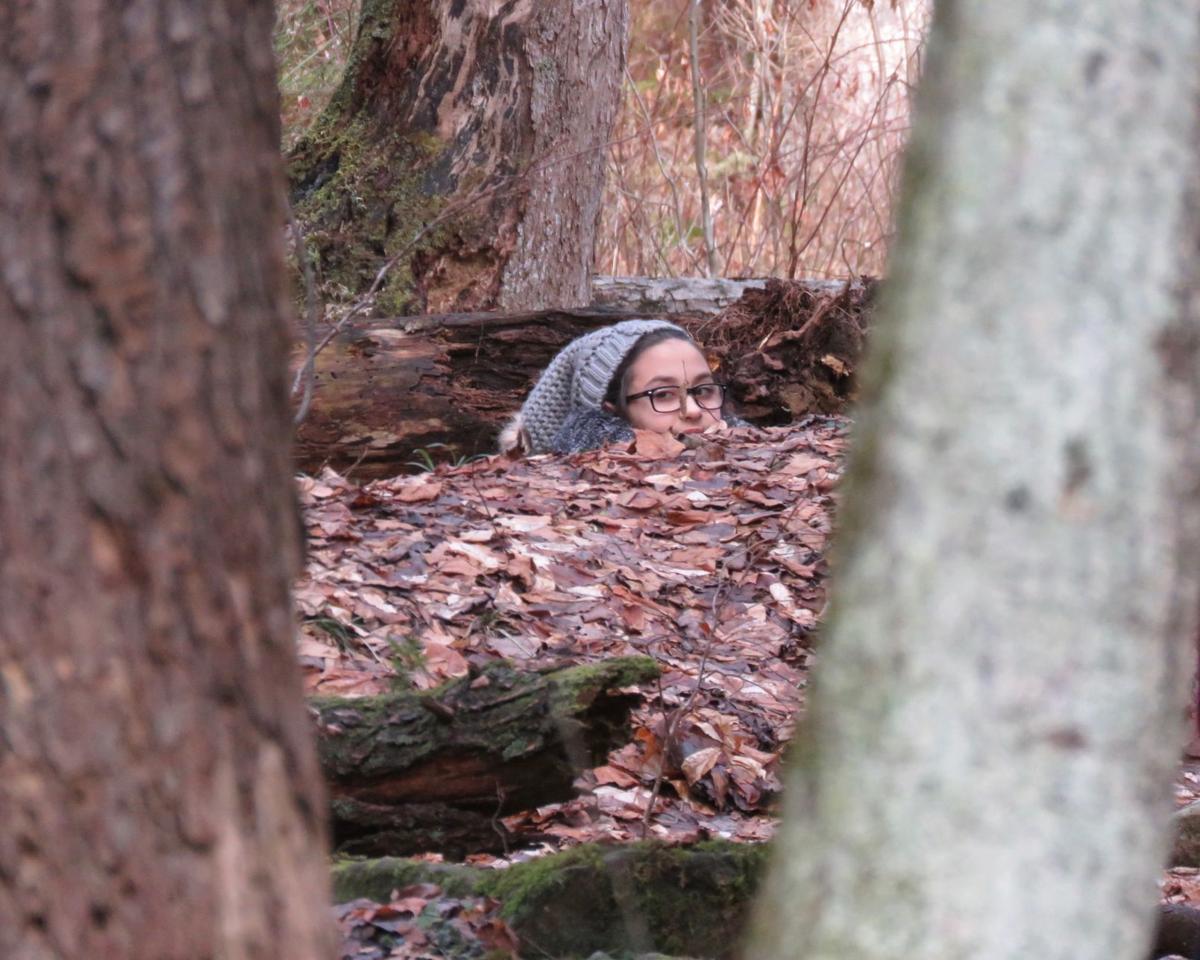 A girl is shown hiding in a hole by a fallen tree in hopes that she won’t be seen during “Games-in-the-Woods.”

One of the favorite activities enjoyed by the campers is “Games-in-the-Woods,” which is a hide and seek-type game played in the woods. Participants in the Games-in-the-Woods set out to hide amongst the trees while the seeker has her back turned and eyes covered.

A girl is shown hiding in a hole by a fallen tree in hopes that she won’t be seen during “Games-in-the-Woods.”

QUAKER RUN — Lack of snow and lots of mud didn’t stop the fun at Camp Turner’s WinterCamp held Dec. 28 through 30.

Children from all over the region had the opportunity to experience a three-day, overnight camping excursion in the Quaker area of Allegany State Park.

Camp Director John Mann said although the lack of snow prevented the kids from doing a few outdoor activities, including sledding and snowshoeing, there were plenty of other activities to choose from because the staff is well-trained and committed to helping the campers have a great time.

Mann said indoor activities include arts and crafts, music appreciation, darts, ping pong, pool and board games. At Spa Club, the kids do each other’s hair and nails and lip-balm making is very popular. Yoga and Zumba fitness is offered, as well as a Lego Club, a Yule Ball and Mass. Campers can even help out in the kitchen. There are a lot of outdoor sports activities going on including dodgeball, pickleball, “9-Square-in-the-Air,” “Gaga Ball,” volleyball, basketball, court hockey and disc golf.

One favorite outdoor activity is “Games-in-the-Woods,” which is a hide and seek-type game played in the woods. Campers can also participate in nature hikes where they track deer, learn outdoor living skills and survival skills, a night hike, fire building and how to make a campsite, along with different team-building activities.

Another outdoor activity called “Elven Village” takes place in the woods by the creek. Using rocks, branches and other forest materials, the kids go into the woods to make little structures and even entire cities for the imaginary elves who take care of the forest.

If there is snow, the kids create snow art building snowmen and snow sculptures. Mann said he would like to thank the naturalists at Allegany State Park for loaning them the snowshoes.

According to Mann, the camp’s capacity is 80 kids. This year, 61 attended WinterCamp and this was the first time for about a dozen of the attendees. He said their ages range from 7 to 16 and they come from all over Western New York including Dunkirk, Fredonia, Olean, Bradford, Springville, Tonawanda, Williamsville, Clarence, East Aurora, Orchard Park, Lancaster, Buffalo and other Buffalo areas, as well as nearby Ellicottville, Great Valley and Salamanca.

Mann said the camp is not only fun, but they try to make it educational as well. He said WinterCamp is a little more laidback compared to the summer program, but it’s still well-structured and supervised. It’s only three days and they try to gear it more toward the younger campers to give them a little taste of summer camp.

“We want to help kids discover the presence of God in each other, in the staff and in nature,” he said.

ORIGINALLY FROM North Tonawanda, Mann and his wife, Sheryl Soborowski who is also a staff member, live in Great Valley. Mann has been Camp Director for 17 years, but began as a counselor at Camp Turner, in 1983.

Jake Overfield of Orchard Park and Marguerite Mosher of Ransomville were both campers growing up and are now on staff. Overfield, a chemistry teacher at a Buffalo area Catholic school, has been attending both summer and winter camp for eight years and now serves as the camp’s program director.

“I was a camper here for five years, then I got involved because I loved the place, the atmosphere and the nature aspect,” he said.

Mosher, who is in her first year of college as a psychology major, teaches outdoor skills at the camp. She said she was a camper from ages 10 to 16 and Overfield was her counselor for years. When she met all the requirements, he gave her a woodsman test at Fox Fire where she learned her outdoor skills. When she passed, he presented her with the Cap Stone award.

Next generation Nokia 2.3 brings powerful AI to everyone, now available for pre-sale in the United States

“It was all survival skills. I had to build a lean-to and sleep in it all night. I had to keep a fire going, so I could light it and relight it with no matches in the morning,” she said. “When Jake got this job as program director, I started running Fox Fire Village in the woods teaching outdoor skills. Now, it’s me who usually runs those tests and gives out some of those awards.”

Overfield said they had 15 camp counselors at WinterCamp this year. He said many return each year, but some have come back after being off for several years. Mosher said a lot of the older staff can’t come back for a full week during the summer, but they can often take a couple of days off of work during the holidays.

People may wonder what keeps Mann coming back year after year. He said it’s the pride of watching his staff grow up and seeing what they accomplish after they go out in the world. He said some of his staff are at camp for a whole summer or several summers, and that makes a big impact on their lives. He said they make lifetime friendships and they learn a lot of job skills that are transferable to a wide variety of careers.

“They come to me as young staff members of 16, 17 and 18 years old. They spend three, four or five summers with me. Then they go on and do good in the world,” he said. “Some become teachers, social workers, scientists and entrepreneurs.”

Beginning with Camp Turner’s SummerCamp, the Department of Youth and Young Adult Ministry of the Catholic Diocese of Buffalo has operated the not-for-profit camp since 1923. WinterCamp started about 2004 and is open to all children regardless of religious affiliation, race or gender.

Registration for SummerCamp opens Jan. 21. More details and information can be found online at campturner.com, by email at campturner@gmail.com or by calling 354-4555.