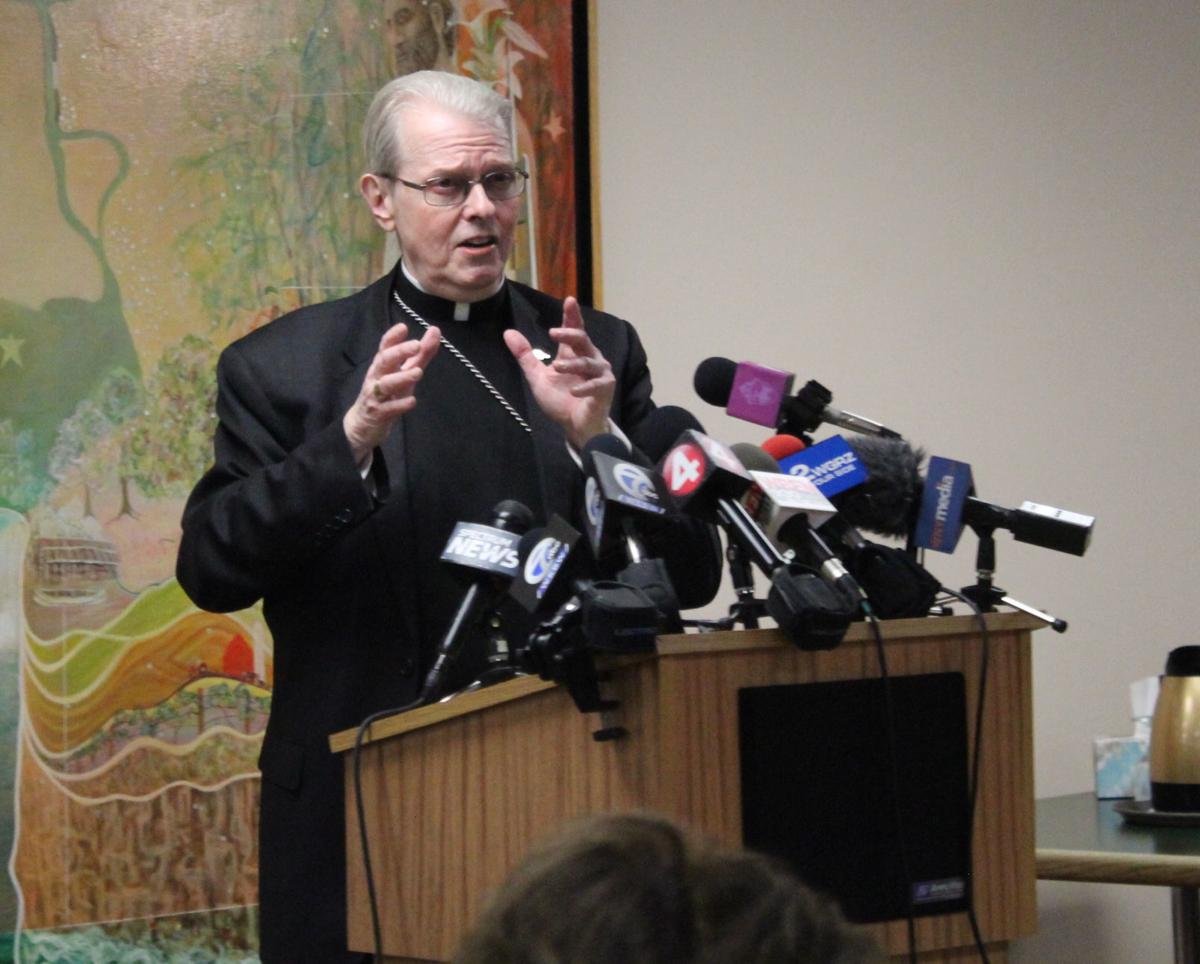 Bishop Edward B. Scharfenberger of Albany, appointed apostolic administrator of the Buffalo diocese, speaks during a press conference in Buffalo on Wednesday. 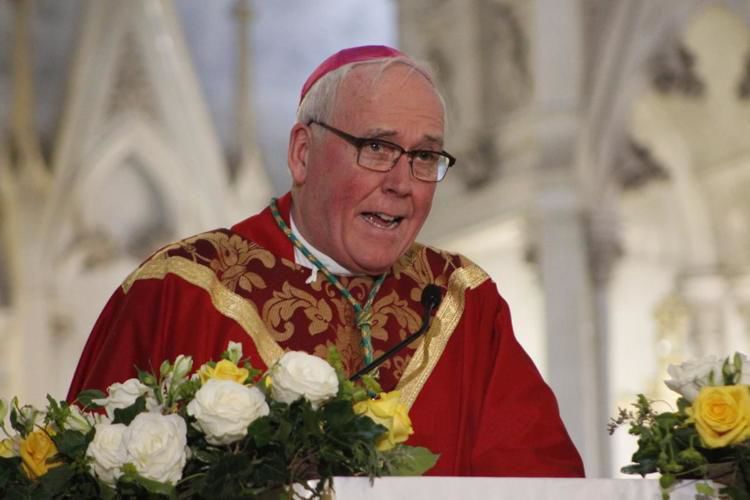 Former Buffalo Bishop Richard Malone speaks during a mass in Olean’s Basilica of St. Mary of the Angels in 2017.

Bishop Edward B. Scharfenberger of Albany, appointed apostolic administrator of the Buffalo diocese, speaks during a press conference in Buffalo on Wednesday.

Former Buffalo Bishop Richard Malone speaks during a mass in Olean’s Basilica of St. Mary of the Angels in 2017.

BUFFALO — In the wake of the resignation of former Bishop Richard J. Malone on Wednesday, the interim leader of the Diocese of Buffalo said he will serve as a father or grandfather of a family “that is in need of healing.”

Bishop Edward B. Scharfenberger of Albany, appointed apostolic administrator of the Buffalo diocese, addressed the media Wednesday after Malone, facing months of criticism over the sex abuse crisis in the Diocese of Buffalo, stepped down a few weeks after his ad limina visit to the Vatican in November.

Scharfenberger, who will lead the Buffalo diocese until a new bishop is appointed, will also continue his duties as bishop of the Diocese of Albany.

“My desire to be with you is to be as a father, or a grandfather, of a family that is in need of healing,” Scharfenberger said during a press conference at the Catholic Center in Buffalo Wednesday morning. “Never be afraid to come forward. It will be treated with respect.”

Scharfenberger said that he had not spoken to Malone about the state of the diocese prior to his resignation.

“I think to some extent that’s maybe better,” he said, noting he has no plans to meet with Malone in person in the foreseeable future.

“My job is not to meet with Bishop Malone,” Scharfenberger said. “My job is to do my job. … I want to get fixing in motion, and I want to do it with you.”

As apostolic administrator, Scharfenberger holds the same power that a diocesan bishop would.

He said that though the scars of the abuse and administrative oversight in the Buffalo diocese run deep, “there’s always room for hope,” noting that he believes the fallout the diocese has faced is fixable.

Scharfenberger said he plans to form personal relationships with abuse survivors and laypeople in order to create trust between himself and members of the Catholic Church.

“There’s no question that trust has been broken or compromised,” Scharfenberger said. “Trust is something that has … to be built and, ultimately, it’s a gift.

“We can’t be afraid of reality,” he said. “We have to be able to, with sober eyes, look at the damage that was done.”

Survivors of the abuse in the Diocese of Buffalo, as well as laypeople and priests, have faced emotional turmoil over the past several years. Scharfenberger said that the people in the diocese are his primary concern. He spoke about using a survivor-first approach, noting that he would prioritize meeting with abuse survivors and working with them to rebuild their faith.

The diocese also has an existing concern about financial stability, even as Scharfenberger begins looking forward.

Why the Shamrock Shake and PSL are big business

“Money is going to be an issue that’s going to come up,” Scharfenberger said. “We’ll examine all responsible options.”

In leading the Diocese of Buffalo, Scharfenberger said that he planned to commit to being physically present in Buffalo for at least one day each week.

In his statement, Malone, who did not appear at the press conference and is now bishop emeritus, said the diocese “has faced tremendous turmoil” over the past year and a half.

“Some have attributed this to my own shortcomings, but the turmoil also reflects the culmination of systemic failings over many years in the worldwide handling of sexual abuse of minors by members of the clergy,” he said.

Malone’s statement indicated that the crisis the church faces “relates not only to the immoral and criminal acts of those who committed unconscionable offenses toward the most vulnerable, but also to the failure to regard these violations as grave offenses that warranted the full weight of civil and ecclesiastical justice.”

Malone, 73, who was appointed bishop in Buffalo in 2012, said in his statement that he acknowledges his mistakes in regard to the scandal.

“I have met with many survivors of child sexual abuse and felt deeply their anguish, which words and gestures alone are inadequate to soothe,” he said. “I have acknowledged on many occasions the mistakes I have made in not addressing more swiftly personnel issues that, in my view, required time to sort out complex details pertaining to behavior between adults.

“In extensive listening sessions across our Diocese, I have heard your dismay and rightful concerns. I have been personally affected by the hurt and disappointment you have expressed, all of which have informed our actions. I have sought your understanding, your advice, your patience and your forgiveness.”

For his part, Malone said the diocese has made progress in ensuring safe environments for children and accountability among clergy and religious educators, lay church ministers and volunteers.

“We now have rigorous protocols, an independent review board, as well as reporting systems that allow any and all to come forward and report concerns over real and perceived improprieties by Church personnel of every rank and status,” he said.

Malone noted that during his tenure, not a single priest ordained in the past 30 years has had an allegation of child sex abuse substantiated.

The diocese reported in May that it had paid $17.5 million to date to 106 childhood victims of clergy sex abuse, rejecting another 135 applicants for lack of evidence. In September, it was reported at least 170 lawsuits concerning sexual abuse had been filed.

Apostolic Nunciature of the U.S.'s communique