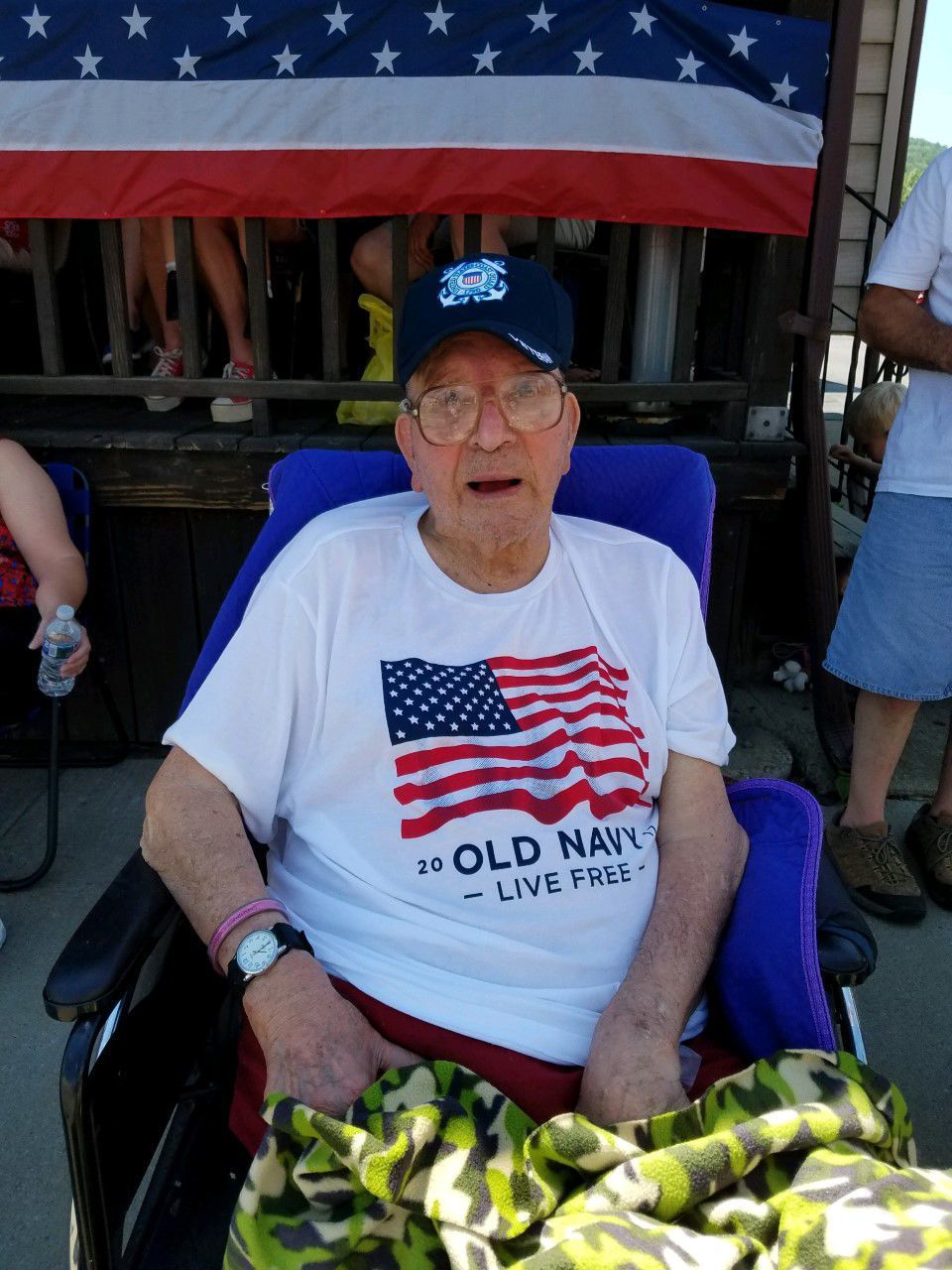 Harry Truman became president upon the death of President Roosevelt and the United Nations was created. Germany and then Japan surrendered, ending World War II.

Saturday, the day before what would have been his 95th birthday, Wilson was to receive the 75-Year National Legion Membership Award at the legion’s 98th birthday dinner.

“We never had the opportunity to present it to him,” Pat Dunn, commander, said. “Our intent was to give it to him (Saturday).”

“He was the oldest living member of the Portville American Legion,” said Wilson’s son, Richard “Rick” Wilson of Portville. “We found out that there was a Drum and Bugle Corps at the legion between 1945 and 1949. Dad played the drums.”

Mary Lee Wenke, Wilson’s daughter, said she was proud of her father for his work ethic, love of his family and love of his country.

“It was evident by him leaving school his senior year to enlist in the Coast Guard, to serve our country in WWII, later to run a family business and work for the government as the Portville postmaster his whole career until his retirement,” she said.

Kitty Cooley, another daughter, said Wilson’s Hometown Heroes banner, honoring veterans from the town of Portville, went up first in 2017 and continues to hang in front of the Portville Post Office, a fitting tribute to its longtime postmaster.

WILSON JOINED the U.S. Coast Guard in March of 1943, right before his graduation from Portville Central School in June. His newly commissioned ship, the USS LST-769, became part of the Amphibious Forces, Pacific Fleet. He served until February 1946, working in the engine room in the bowels of the ship, and mustered out as a fireman first class.

Wenke and Cooley said their dad always had a few stories about his wartime experiences.

“One of the first stories I remember is whittling the ‘pigs’,” Cooley said. “They would whittle these wooden pegs, pigs, that had to be so wide and so long. They’d throw them in a bucket to be used to plug the bullet holes in the boarding barges as they came up.”

Rick Wilson said his dad talked about “his” ship.

He often thought he owned a ship and that it was in the Buffalo Harbor, Rick Wilson said.

“He worried about who’s watching the ship while I’m visiting him so I would tell him I have a week’s leave,” he said.

The elder Wilson worried about the safety and security of the ship and often insisted on knowing who was watching it.

When Rick would tell his father he left F.J. (another son) in charge, the elder Wilson got agitated, saying of F.J., “He’ll take it for a ride.”

Upon returning to Portville after WWII, Wilson helped his parents run Wilson’s Fruit Market. He later took over the business, married Myrt, his wife of 67 years, and started his family.

During his high school days, Wilson was on just about every sports field and court the school offered — winning varsity letters as a football quarterback, basketball guard and baseball left-fielder and catcher.

As an adult, “he still found time for sports in his life, playing softball in local tavern leagues and fundraising for sports boosters for many years,” Wenke said.

He was also involved at the collegiate level of sports in the community, and under Coach Larry Weise at St. Bonaventure University Wilson helped organize the IAABO classic basketball tournaments still held annually. He was awarded the IAABO Lifetime Achievement Award.

For his military service, Wilson was awarded the New York State Medal of Merit and the Cold War Recognition Certificate. Cooley said he also qualified for “a couple of other medals as well relating to his experience during the war.”

Dunn said the Legion will get together with the family to make arrangements to present the award posthumously at a later date.