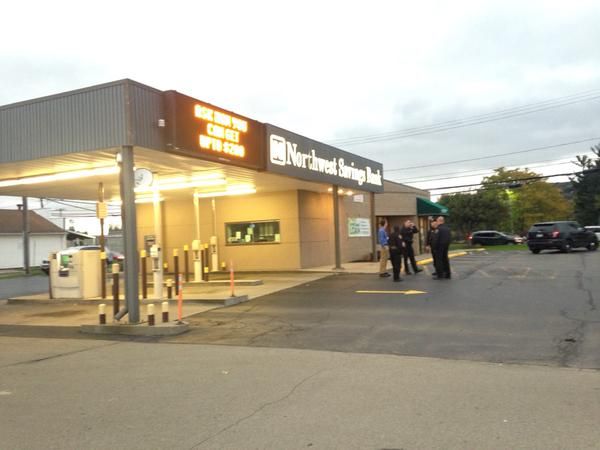 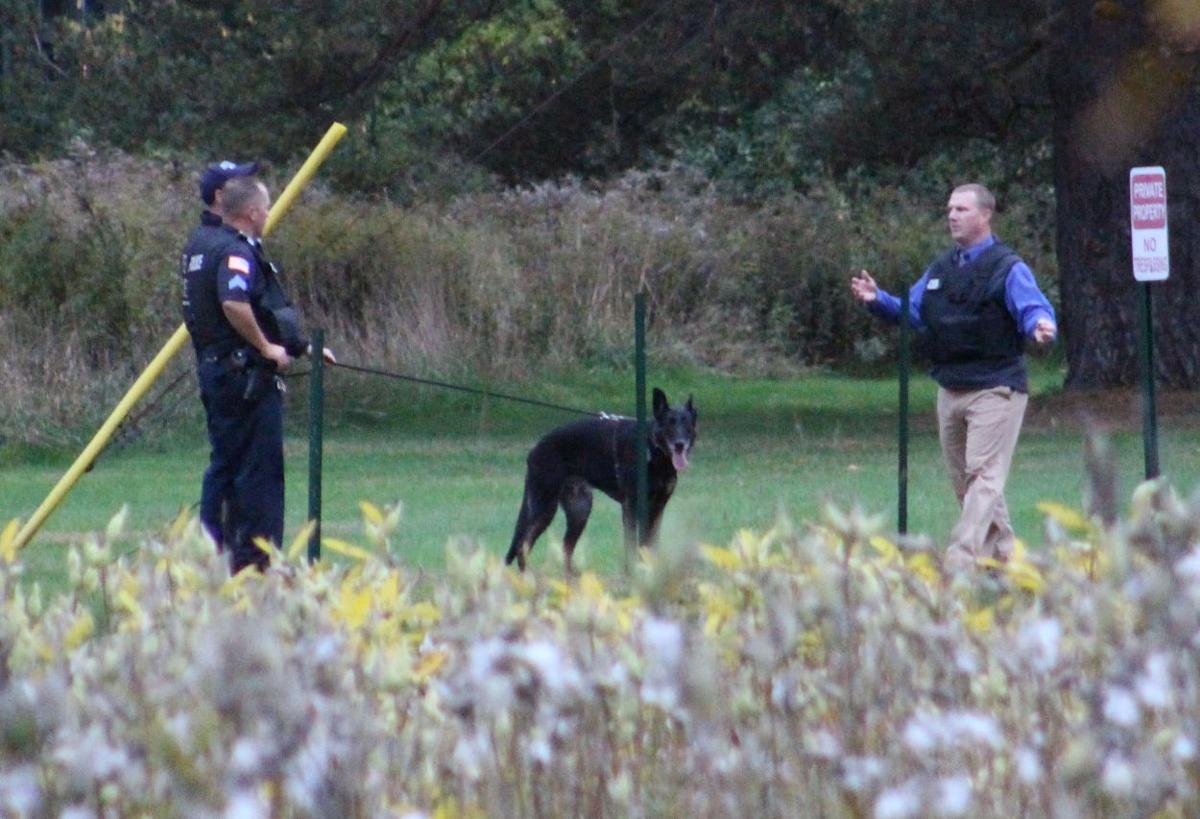 Police search near Olean’s Gargoyle Park on Friday for the suspect in the robbery. 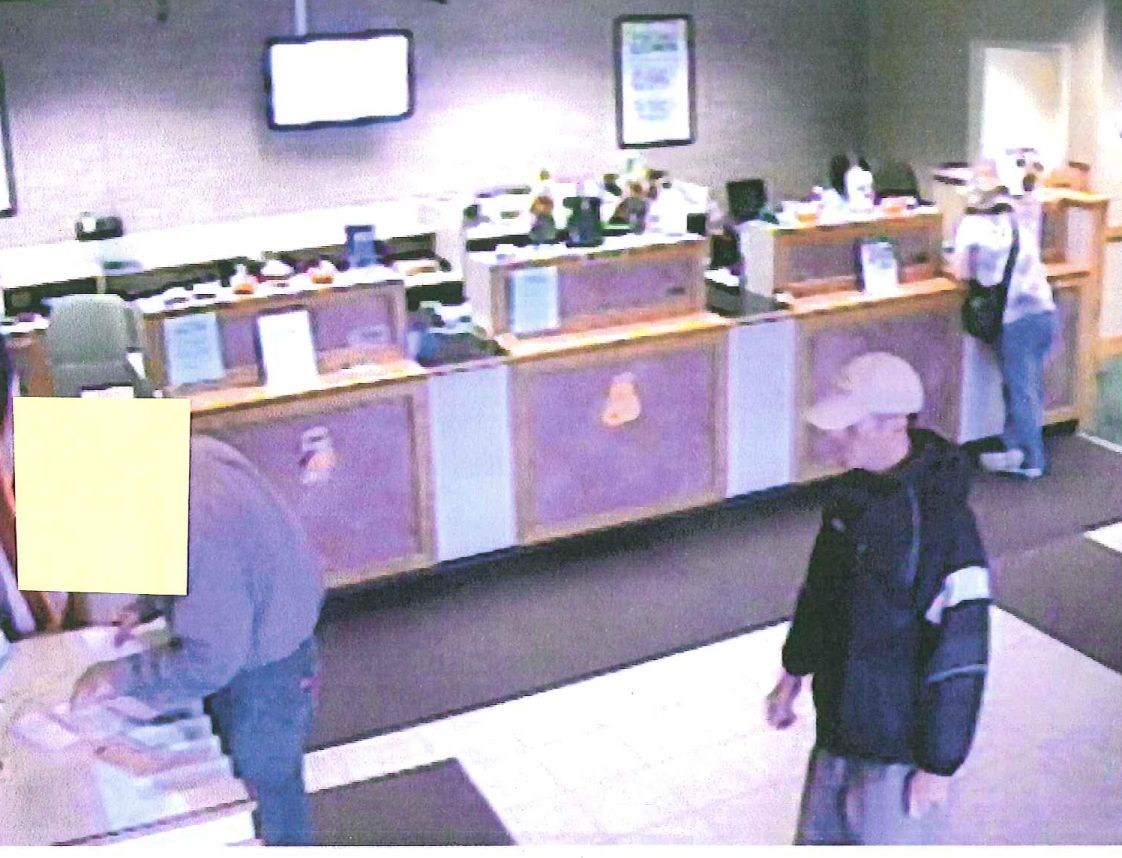 Police search near Olean’s Gargoyle Park on Friday for the suspect in the robbery.

Around 4:10 p.m., a man between 30 and 40 years old, approximately 5-feet, 8-inches tall, wearing a dark jacket with white markings on its front and a hat, entered the bank in the well-traveled Tops Markets plaza and handed a teller a note demanding money. The note indicated the suspect had a weapon, though he did not brandish one.

Authorities had not apprehended a suspect by approximately 11:30 p.m.

Police said there were five employees in the bank at the time of the robbery, with four behind the counter.

“They were all pretty shaken up,” said Capt. Robert Blovsky of the city’s police department, who is heading the investigation. “The teller he gave the note to gave him money.”

Blovsky declined to specify how much money the teller handed over. No injuries were reported.

“That’s something we usually hold pretty close. Only particular people know that,” he said.

The suspect then fled on foot down South 25th Street into a wooded area near the Eden Heights Assisted Living & Memory Care facility, a retirement home.

In addition to Olean police and a K9 unit, New York State Police and the Cattaraugus County Sheriff’s Office mobilized a search in the area between Eden Heights and Gargoyle Park. It’s uncertain where the suspect went from there, Blovsky said.

“The K9 hit down that way. He just couldn’t track it very far,” he added. “The guy definitely went that way. We just have to figure out where he went from there, whether he went in a car or on foot.”

During the initial hours of the search, the retirement home was on lockdown. Investigators stopped in nearby businesses, including those in the Tops Markets plaza and AJ’s Bar.

“A few cops came in here to ask if anyone suspicious had come in,” said Garen LeRoy, an employee at AJ’s. “I had just started my shift, so I called my mom who worked right before me, and she said everyone that was in were the regulars.

“It’s scary that something like this could happen because what was to stop (the robber) from coming here and robbing us?”

Those at Kevin’s Custom Creations and Repair, a jewelry store located across the street from the bank, were unaware a robbery had occurred.

“I was just inside working and didn’t know anything was going on,” said Kevin Keis, the shop’s owner. “Then a bunch of police cars pulled into the bank. They came in here and asked if I saw anything. I hadn’t.”

“This is too close for comfort,” added Kevin’s wife, Jerri.

Investigators could be seen inside the bank talking with staff and collecting evidence for about two hours. Most police had left by 6:45 p.m.

“We’ve got to work on it,” Blovsky said, noting police may release a photo to the media if the search necessitates it. “I want to work on it a little further and see what I can come up with (today). We have video coming, and I’ll be able to work at it a little better. Hopefully, that will give us a better idea, a better description, where he went after the bank, that kind of stuff.”

Anyone with information may call 376-5678. All calls will be confidential.

“There were a lot of people in that plaza, maybe just driving by waiting for the light,” Blovsky said. “Anybody can give me a call and tell me anything, no matter how small they think it is, or inconsequential, it’s important that we know anything that they saw.”