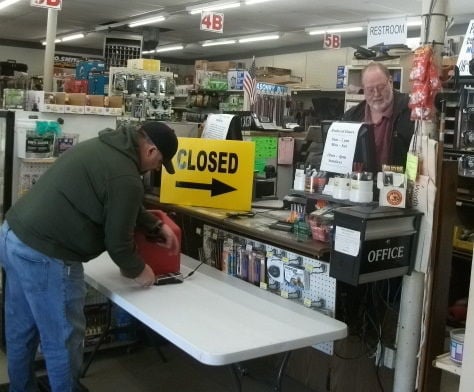 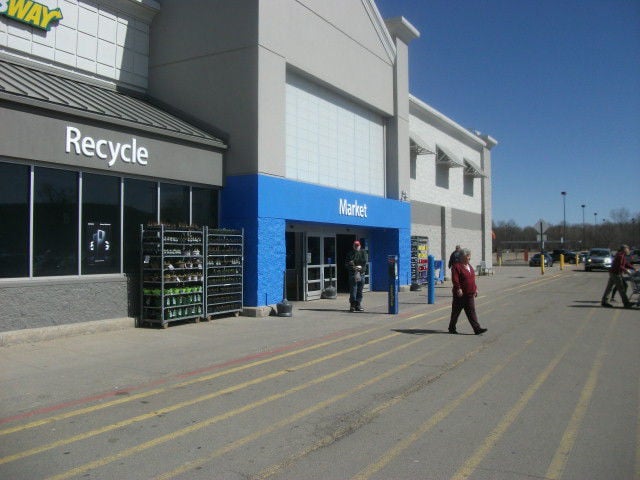 Unlike images seen on the national news, there were no lines outside the buildings of local grocery stores on Sunday. 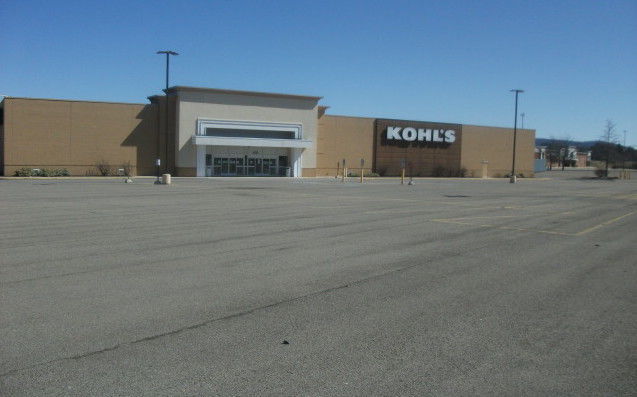 The empty parking lot at Olean Center Mall on Sunday.

Unlike images seen on the national news, there were no lines outside the buildings of local grocery stores on Sunday.

The empty parking lot at Olean Center Mall on Sunday.

OLEAN — The doors of most businesses were locked, the windows dark. North Union Street, even for a Sunday afternoon, was eerily quiet.

But here and there, commerce was still going on.

Mike Gerringer, an employee at Worth W. Smith on East State Street, said the hardware store location had been doing a brisk business Sunday. Hardware stores are among the businesses that may remain open in New York state.

“Particularly in filling propane tanks,” he said, while noting that sanitary products have been sold out.

As he was speaking with a reporter, a customer was buying two 20-gallon fuel containers.

“We’ve had some people come in and, since they are off, they are trying to get something done around the house,” Gerringer said. “We’re selling a lot of plumbing supplies.”

In Olean-area grocery stores Sunday afternoon, while shelves looked thinner here and there than in normal times, shoppers were finding items — from fresh vegetables to even paper products.

And there certainly were not queues of people trailing out into the the parking lots, waiting for their chance to enter, as has been seen on the news in more urban regions of the country.

“I found what I needed,” a woman (she declined to give her name) said as she pushed her cart out of Park & Shop on Front Street.

David Ried of Ried’s Food Barn said, for the most part, foods items are available and in stock.

“Foods are not as severe a problem as non-foods, like paper, cleaning and sanitizing products,” he said Sunday. “Commodities like flour and eggs have, from time to time, been scarce, but most packaged foods have been available.

“Customers might not always find a specific brand, but they generally find what they can use,” he added.

Ried did say, because of “frenzied consumer buying,” supplies of all kinds are depleted quickly.

“We are finding that the effects of buying frenzy are tracing their way back up the supply chain, all the way to the manufacturer,” he said. “We are receiving as little as 40% of what we order from some wholesalers.”

Meats and produce have generally been in good supply, he said.

“Our staff are working extra hours, around the clock, and at no small risk to get the needed products into our communities’ households,” Ried said.

In Walmart Sunday afternoon, the paper products aisle was certainly depleted, but customers were finding toilet paper and paper towels. Employees were seen pushing loads of paper products to the aisle.

In Tops Friendly Market, the scene was similar.

In Wellsville and Cuba, Giant Food Mart is modifying hours and services to benefit older and high-risk shoppers in the community. Beginning Tuesday, the stores will open one hour early, at 6 a.m. Tuesdays and Thursdays, to allow those customers to shop with less fellow customers.

“Please understand that this is something completely new to us, as we work everything out getting this started,” stated a press release. “We want to make this difficult time as simple as it can be for our customers.”

MANY LOCAL restaurants are closed, but some are adapting to the current delivery and takeout economy.

Randy Korkowicz, owner of Randy’s Up the River in Allegany and Randy’s Fireside in Westons Mills, said that like other restaurant owners, sales have slumped due to the loss of dine-in services.

“We’re probably down 70% of a normal week,” he said, with Randy’s Fireside down more than his Allegany location.

However, there have been positives. Takeouts and deliveries are up from before, and Friday saw a large jump in orders.

“Our fish fries are tremendous — I was so proud of the community coming together,” Korkowicz said. “I was considering putting in another phone line. The phone was going nonstop.”

He said he worries about the employees he’s had to let go, and said those remaining have stepped up to the task of keeping sanitary standards and delivering quality products.

“My employees have been tremendous,” he said, adding some bartenders are now delivering to customers as a way to keep on the job.

The Greater Olean Area Chamber of Commerce has created online listings for restaurant takeout and delivery hours, as well as supermarket hours and delivery options. For more information, visit www.oleanny.com.

Meanwhile, vehicles could be seen in the drive-through lanes at Tim Hortons, McDonald’s, Burger King, KFC/Taco Bell and Dunkin.

BUT WHILE some business was being transacted Sunday, small business owners idled by the state’s mandatory shutdown were left to wonder what their future holds.

“For the first time in my 33 years in business, I’ve had to lay people off,” said Dave Carucci, owner of Premo Limo Services and Empire Coach Lines.

With his destination and college sports team bookings canceled for the foreseeable future, Carucci estimates his company has already lost $500,000 in business. A portion of his service is considered essential, as his drivers transport dialysis patients to their appointments, but that’s a fraction of his weekly business.

“All we can do right now is see what the government is going to do for small business,” the former mayor of Olean said. “We just have to hope that there will be something there to get us through this.”

He pointed out that his partner, Laurie Ryan, had to shut down her shop, Ray’s Hairstyling, putting another 16 people out of work.

Carucci said these are the kind of businesses that are the lifeblood of the Main Street USA economy — and they are all in jeopardy because of the coronavirus pandemic.

“The damage that this is doing is just like nothing we’ve ever seen,” he said.

MEANWHILE, WITH CHURCHES closed to Sunday worship, many of the faithful watched online services.

During a Mass streamed on Facebook Live Sunday morning, Rev. Patrick Melfi, pastor and rector of the Basilica of St. Marys of the Angels, said in trying times families don’t have to be in church to gather in prayer and be close to God.

He asked that people in the community remember particularly to safely check in on their older neighbors and fellow parishioners.

“The power of God’s grace offers us strength in times of fear and uncertainty and stress,” he said. “It’s important to remember that he is always close to us — wherever we are.”